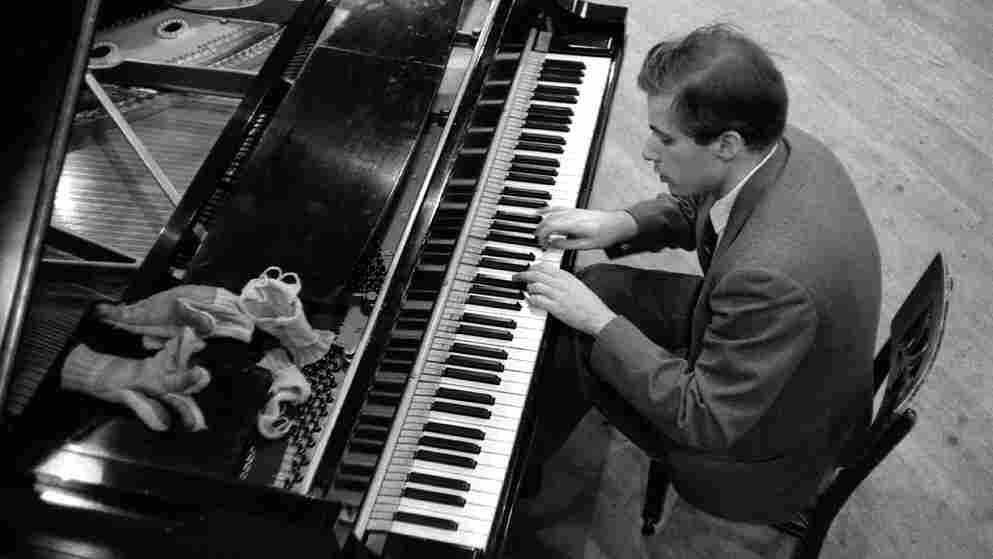 Glenn Gould, with his gloves and wrist-warmers, in the Columbia Records studio where he recorded Bach's Goldberg Variations. Don Hunstein/Sony Classical hide caption

Pianist Glenn Gould rocketed to fame in 1955 with his startling and original take on Bach's Goldberg Variations. Gould's fans were treated to a remake of Goldbergs in 1982, when he released a slower-paced rendition just before his untimely death. But it's that first, rapid fire 1955 recording that continues to captivate audiences.

Now there's an expanded version, a hefty box set that illustrates Gould's intense perfectionism. The set includes the original 1955 album – both on vinyl and CD – and the complete recording sessions, with all the outtakes.

Tim Page, professor of music and journalism at the University of Southern California, was a friend of Glenn Gould's and has sifted through the new set. He says when Gould released that 1955 recording it was an extraordinary moment.

"Here was this piece that was considered rather academic and a little fusty, and here came this brilliant, 22-year-old pianist from Canada playing as though he was running with the wind," Page says. "It was so surprising, so dynamic. People had been moving away from playing Bach on the piano and all of a sudden here comes the young Glenn Gould."

This Is Your Brain On The Goldberg Variations

Gould's 1955 recording has remained in print for 62 years. And though Gould became a creature of the recording studio himself, what would he think of this new set, with its hours of retakes, mistakes and out of tune pianos?

Howard Scott thinks he knows the answer. Scott produced those original 1955 Gould sessions, and in the coffee table book included in the set, he has strong language for the record label.

"If Glenn knew Sony Classical was going to release those outtakes, which he rejected – he did not like what he had done in those performances – he would probably come down and shoot anybody who allowed them to be released," Scott says in an interview. "And I think it's a disgrace if they do release them." But Sony did release them – all five CDs-worth. 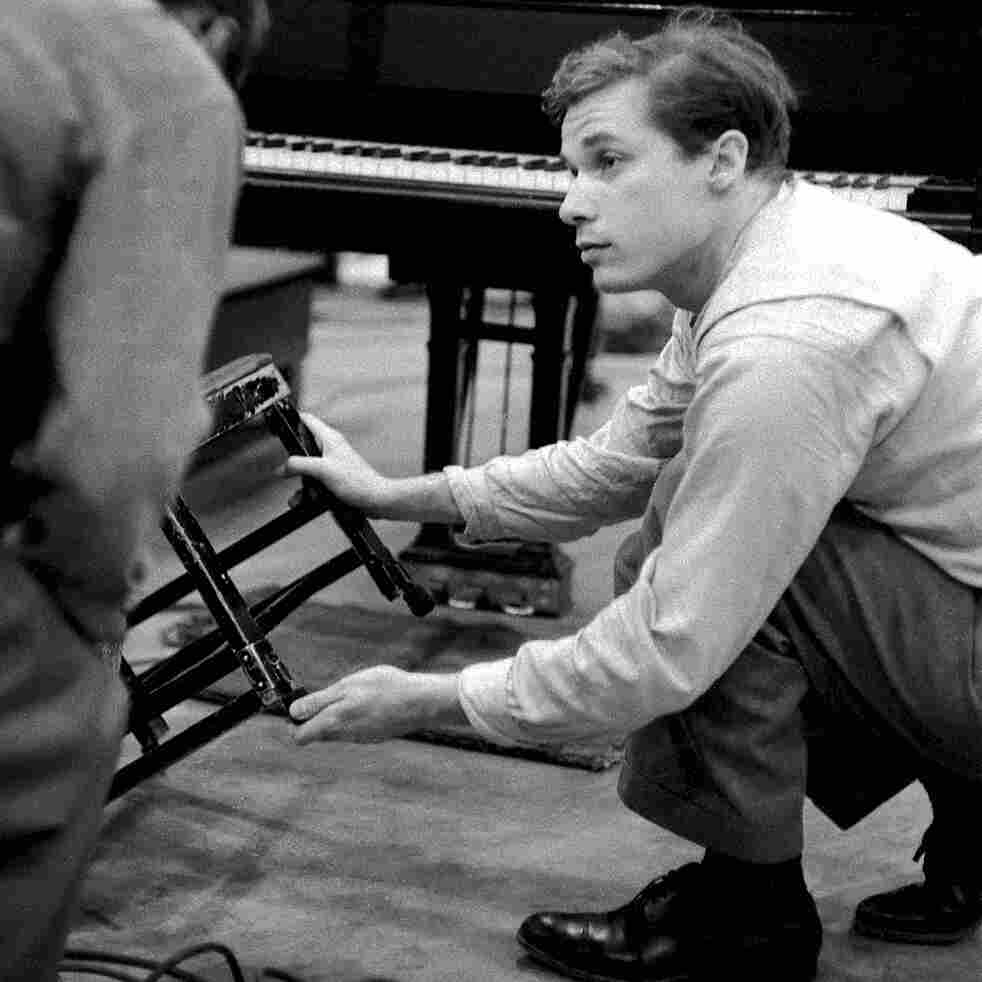 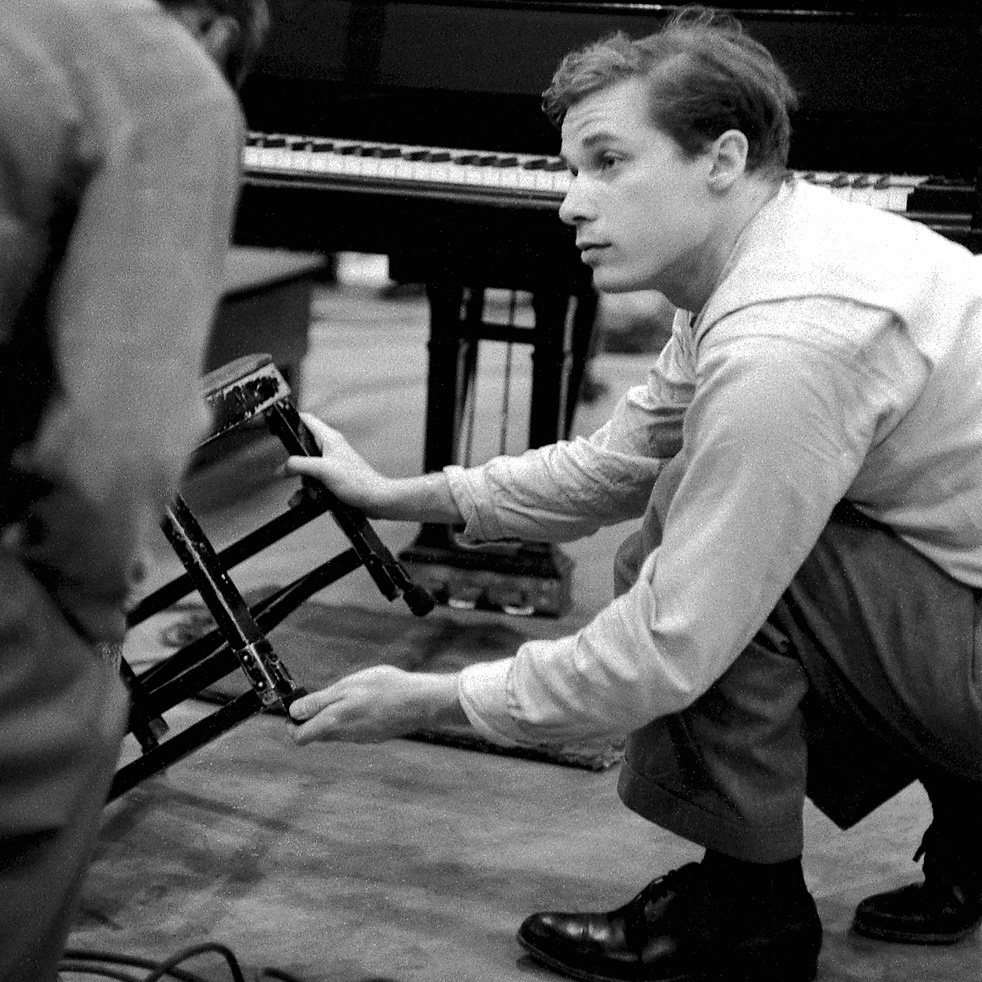 Glenn Gould, in April, 1958, adjusts the special chair he uses to play the piano.

Page takes an alternative position. Also within the new box set is a radio interview Page did with Gould in 1982, a few months before the release of his second recording of the Goldbergs.

"He insulted this 1955 performance all through the interview," Page says. "So, I think he would probably just take it easily because nobody could do worse to this recording than Glenn himself did in our interview."

Gould told Page that he could no longer recognize "the spirit of the person" who made the 1955 recording. After they listen to variation 25, Page compliments Gould on the playing, but the pianist gets specific with his criticism:

"There's a lot of piano playing going on there. And I mean that as the most disparaging comment possible. The line is being pulled every which way, there are cute little dynamic dips and tempo shifts, things that pass for expressive fervor in your average conservatory, I guess. This variation represents everything I mistrust about the earlier version. It wears its heart on its sleeve. It seems to say, 'Please take note. This is tragedy.' It doesn't have the dignity to bear its suffering with a hint of quiet resignation."

Still, Page says that while Gould preferred his later recording, it's the 1955 version which introduced the pianist to the world and it's the performance that "will always shock and delight, the first time you hear it." Gould would turn his back on the concert stage in 1964 to retreat into the recording studio, where he perfected his albums.

There have been other dynamic superstars in classical, pop and jazz, according to Page, but with Gould it's a matter of what we could have had if he had lived longer.

"He's one of these people like James Dean," Page adds. "There's not as much of it as we would like, because there was an early death, which leaves us fascinated with the person and what the person left us. It was strange because Glenn was having one of those mid-career boosts right at the time. And I can still remember this feeling, picking up the New York Times and seeing on the front page that he was dead at the age 50."