Accessibility links
Buñuel's 'Exterminating Angel' Gets An Off-Kilter Screen-To-Stage Adaptation : Deceptive Cadence An unseen force keeps patrons from leaving a dinner party. It's the premise of a 1962 surrealist film — and the basis of British composer Thomas Adès' latest opera. 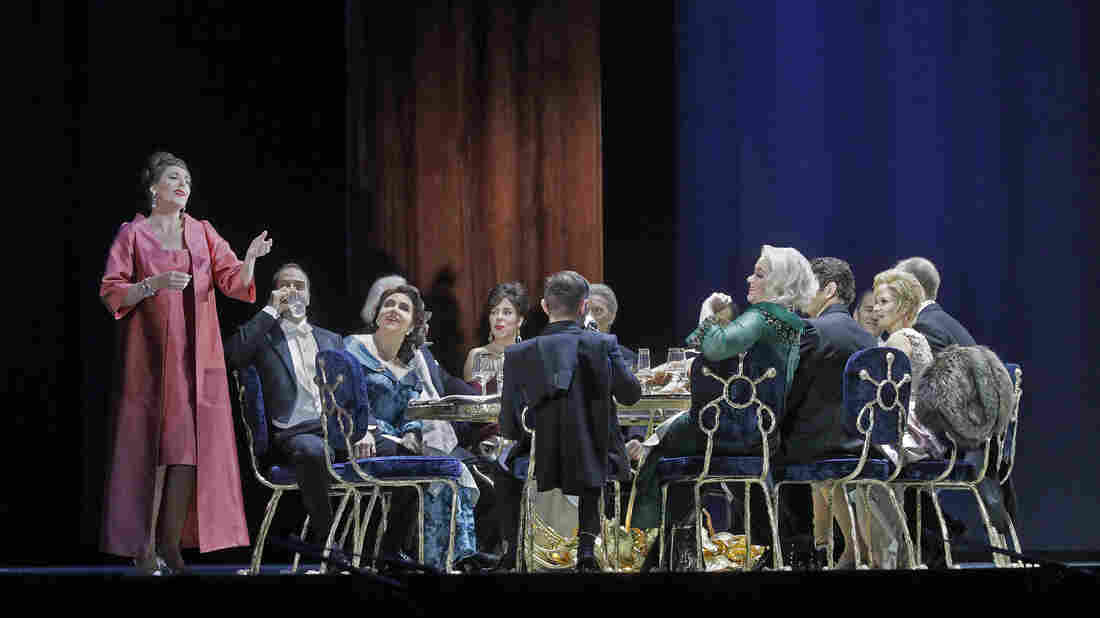 A scene from Thomas Adès' opera The Exterminating Angel, based on Luis Buñuel's 1962 surrealist film of the same name.

Imagine a dinner party that never ends. The guests can't leave. That's the premise for Luis Buñuel's classic 1962 surrealist film The Exterminating Angel. It might seem an unlikely subject for an opera, but that's just what London-born composer Thomas Adès has brought to New York's Metropolitan Opera.

For Adès, the world of surrealism comes naturally. His mother is an art historian and a specialist in surrealism, and from the time he was a teenager Adès was a fan of Buñuel's films.

But when it came to adapting the story from screen to stage, Adès had to make some necessary tweaks. To conjure up the unseen force keeping the patrons at the party, Adès uses an early electronic instrument, the ondes Martenot. It features a keyboard, a sliding metal ring and vacuum tubes to produce eerie sounds.

To help translate the claustrophobic vibe of the original, Adès enlisted Irish director Tom Cairns. Unlike in film, Cairns says, where you can shift the audience's focus by using different camera angles, a stage production is essentially one continuous wide shot. He mounted the opera's set on a turntable that revolves during much of the evening to achieve an unsettling effect.

"While one scene is being played right downstage, everything's on the move very gently," Cairns explains. "By the time that has gone away, a whole new part of the design has come into focus." Adès' music — for example, an off-kilter waltz — heightens the anxiety.

"You can tell all is not as it should be in the music," Adès adds. "The waltz is always slithering around in its tonal center. It's almost as though the actual floor of the building is just tilting a little bit."

Buñuel expert Breixo Viejo, who teaches film at Columbia University, was a guest at the dress rehearsal of The Exterminating Angel. He enjoyed the opera but questioned the medium, with its over-the-top emotions.

That would indeed be surreal. But so is opera, argues Adès.

"Everything about it is not realistic," he says. "I mean, they're singing, you know? That's not real. You don't go around singing."

You don't have live sheep at a dinner party, either. But the opera does, just like the movie.