Accessibility links
Panning For Gold And Self-Awareness In John Adams' New Opera : Deceptive Cadence Set in the California mining camps of the 1850s, Girls of the Golden West, sifts through themes that still weigh heavy today. 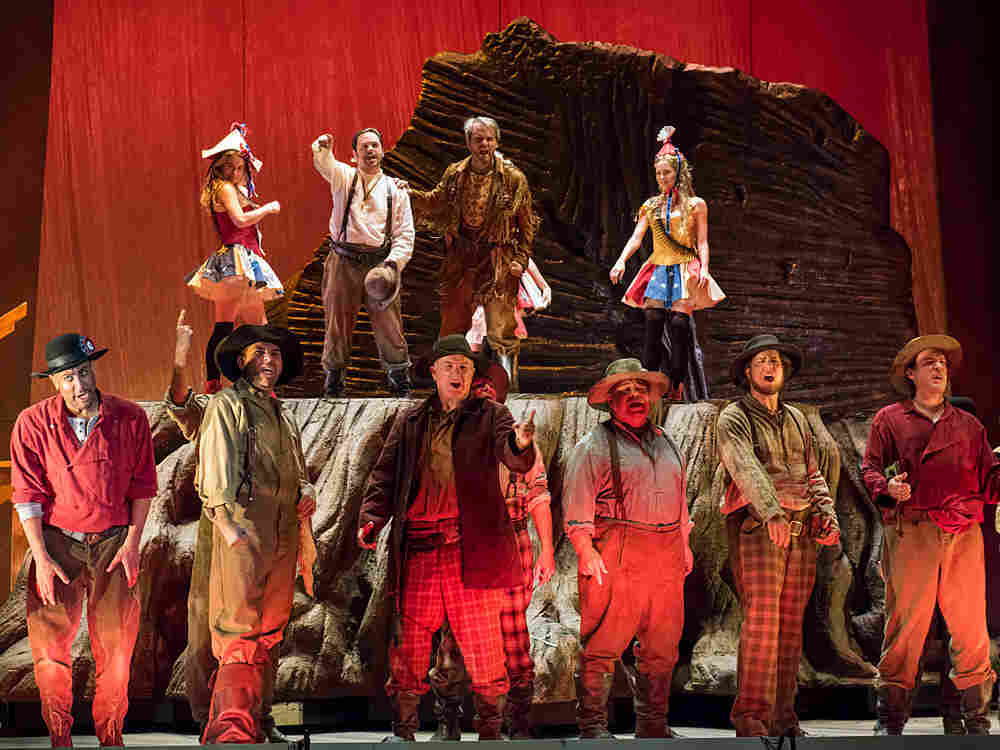 John Adams might be called the "documentarian" among American composers. His works have traced the birth of the atomic bomb, President Nixon's trip to China and the 9-11 attacks. Now, Adams turns to the California Gold Rush. Girls of the Golden West, his new opera, received its world premiere Nov. 21 at the San Francisco Opera.

The Gold Rush might invoke images of happy-go-lucky miners panning for shiny nuggets, but author and historian Marlene Smith-Baranzini says not to expect a lighthearted western from Adams' new opera.

"This isn't Debbie Reynolds singing in her petticoats," she says. "This is the tension of different communities coming together, and we're still facing this as a nation today. What do we do about minorities, what do we do about immigrants?"

Adams' new opera is set in a gritty mining camp during the Gold Rush, where a multi-ethnic cast of characters struggles to get rich quick and live peaceably with each other. And while there are a few laughs along the way, Peter Sellars, the director and librettist, says it's a tough life.

"It's human beings pushed to their limits," he says. "And none of that is reflected in the standard treatment of this stuff for entertainment purposes."

TV and movies, Sellars believes, have had their own narrow-minded take on the so-called "wild west."

"Hollywood was filtering everything through its basically white version of the world and you want to just say, 'Where are the other voices?' And they're here," Sellars says. "It's time we can listen to them."

One of those "other" voices is the character Ah Sing, a Chinese prostitute who dreams of buying a farm. She's based on a real person whose words were scrawled on the wall of a San Francisco detention center for Chinese immigrants and preserved by historians.

Adams and Sellars tracked down other original sources, including Louise Clappe, who went by the pseudonym Dame Shirley. Adams says she was an astute woman from Massachusetts, who lived among the miners for over a year, documenting their lives.

"She wrote letters to her sister back East and she just has the phenomenal gift for describing the primeval landscape of the California's Sierras," Adams says. "So I hardly had to change her texts at all, because they fit my music hand-and-glove."

In the opera's serene epilogue, Shirley reflects on the California geography:

"The river, freed from its wooden flume prison, rolls gradually by. The green and purple beauty of these majestic mountains, looks lovelier than ever, through its pearl-like network of foaming streamlets, while, like an immense concave of pure sapphire, without spot or speck, the wonderful and never-enough-to-be-talked-about sky of California drops down upon the whole its fathomless splendor."

Soprano Julia Bullock, who sings the role of Dame Shirley, was immediately taken with her character's letters.

"She serves the role of the observer which as Americans we actually need great observing voices to document our history," Bullock says. "Even though she was sending these letters directly to her sister, I think that she knew in some way that there was going to be a greater audience for what she was documenting." 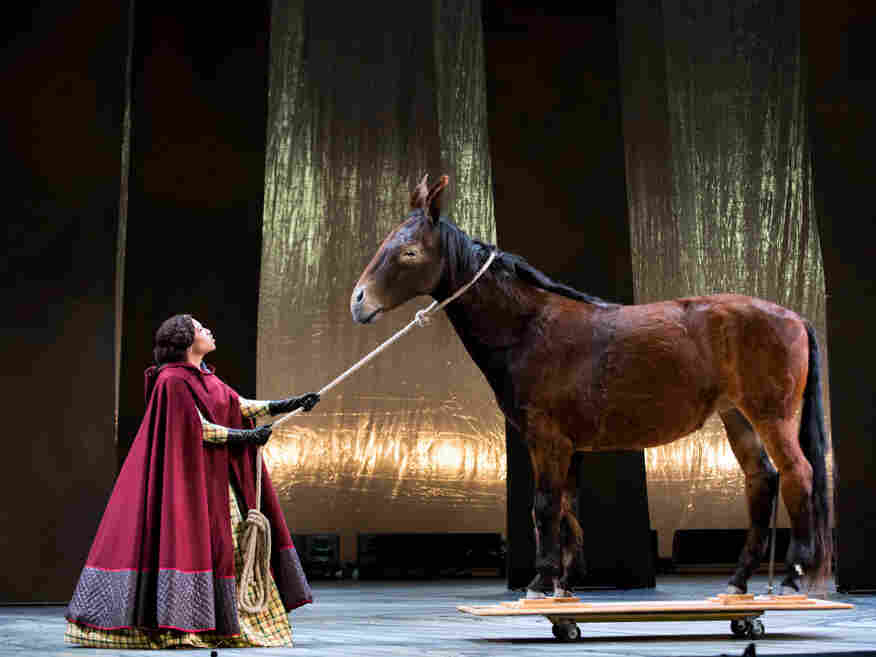 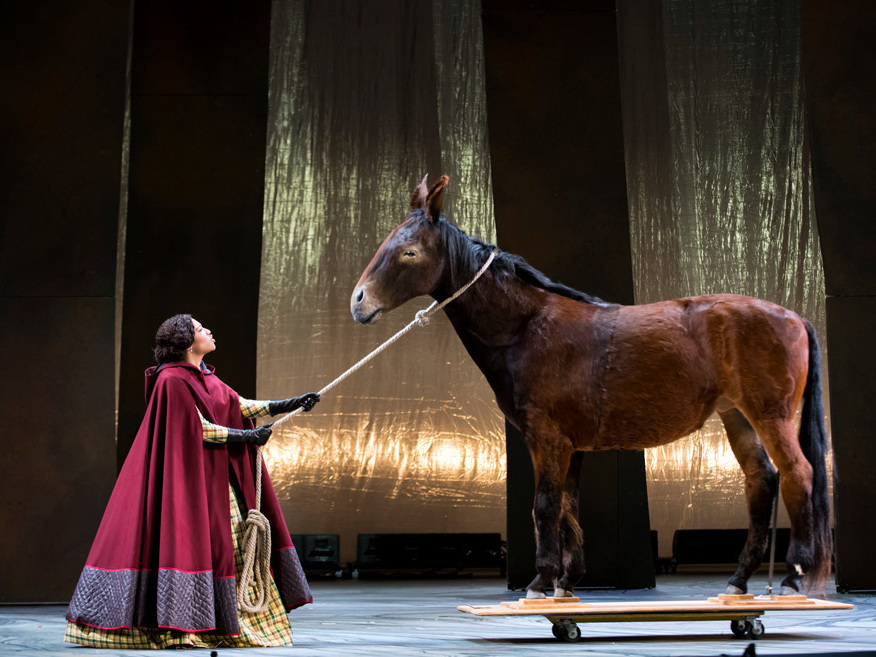 Soprano Julia Bullock, with her mule, rehearsing Girls of the Golden West by John Adams and Peter Sellars. The opera receives it world premiere Nov. 21 at the San Francisco Opera.

Documenting the gold rush in his opera, it turns out, hit close to home for Adams. "The culminating event is a true story which took place about 15 miles from where I've had a cabin in the Sierras for the past 40 years and it happened in 1851 on Independence Day," Adams explains.

In the mining town of Downieville, a drunken white miner entered the tent of a Mexican woman. "And we don't know exactly what he did, but it appears that he harassed her and she fought back and stabbed him and killed him," Adams adds.

And within 24 hours she was tried and hanged. On that violent Independance Day, white miners in Downieville attacked anyone of color. In the opera, the fugitive slave Ned Peters gives a fiery speech. The text, Sellars explains, is by Frederick Douglass.

"In 1852, the great freed slave Frederick Douglass gave a speech called 'What does the Fourth of July Mean to a Slave.' And it is one of the great rhetorical moments in American history," Sellars says. The speech, which condemns racial disparity, still resonates today, and it closes with a volcanic cry to expose the "hypocrisy of the nation."

"And when [Ned] calls for fire and thunder, I have to say, John creates an orchestral deluge that is breathtaking and morally cleansing," Sellars adds.

"The Puccini thing is just pure popcorn saturated in outstanding levels of butter, but nonetheless minus the salt," Sellars says.

"One thing that I'm so proud of John and Peter for doing is daring their audience to look at our history to learn things about ourselves," she says.

And learn, as Dame Shirley did, that we can gain strength by paying attention to and documenting what happens around us.

Girls of the Golden West runs through Dec. 10 at the San Francisco Opera.