Accessibility links
The True Story Of A Spanish Royal And The Very High Voice That Healed Him : Deceptive Cadence The new Broadway musical drama Farinelli And The King tells the tale of the bipolar King Philippe V and the famous 18th-century operatic castrato whose singing nurses him back to health. Mark Rylance (center) plays King Phillipe V in the new play Farinelli And The King. In this scene, opera star Iestyn Davies (left) plays the titular singer whose voice nurses the king back to health. Joan Marcus/Courtesy of the artist hide caption 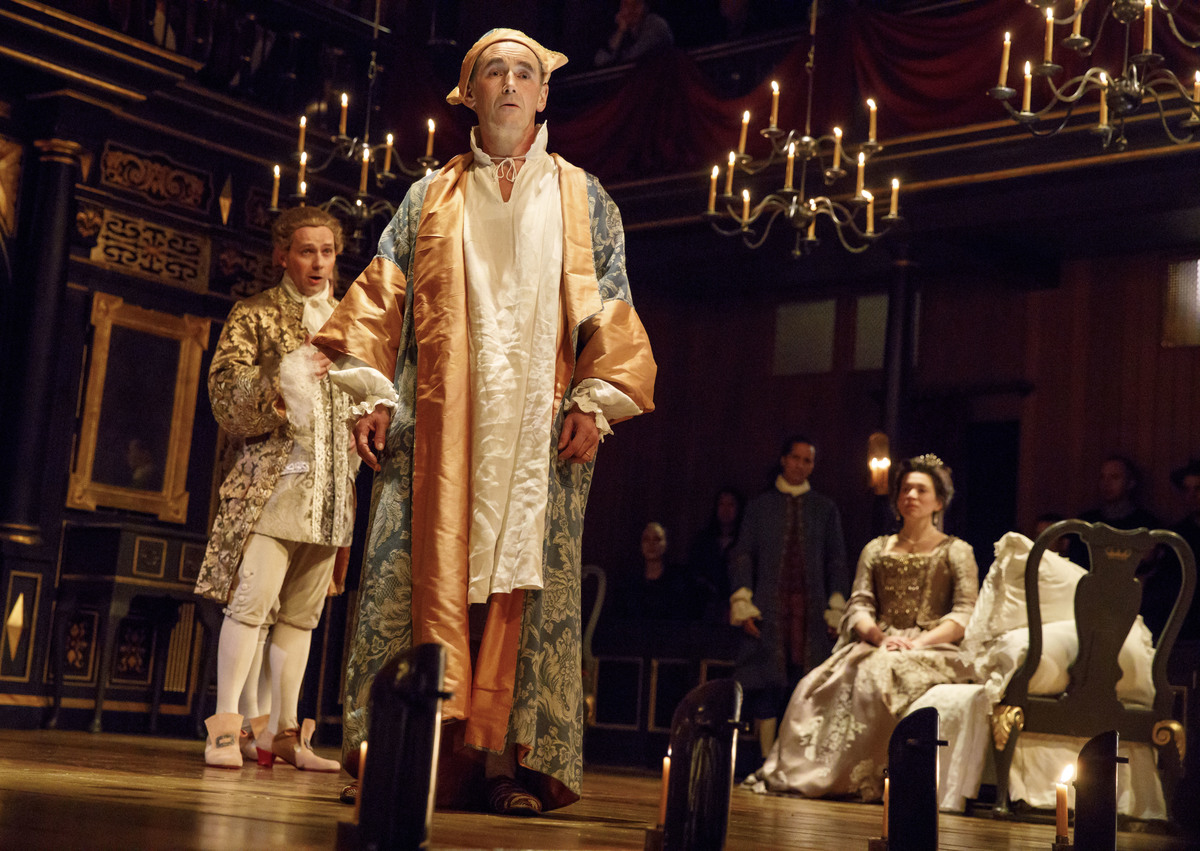 Mark Rylance (center) plays King Phillipe V in the new play Farinelli And The King. In this scene, opera star Iestyn Davies (left) plays the titular singer whose voice nurses the king back to health.

Joan Marcus/Courtesy of the artist

Several years ago, Claire van Kampen was composing music for a London theater production. During a break, one of the singers asked her if she knew the story of Farinelli, the famous 18th century opera singer.

"'You'd really like the bit where he goes to Spain and sings to King Phillipe who has this bipolar disorder.' And then I started to think: Now that's an interesting story that I haven't heard about, seen."

The story of Farinelli was the subject of a 1994 film which only lightly touched on his two decades in Spain. He was there to minister to Phillipe V, whose grandfather was Louis XIV and arranged a marriage alliance that would make Phillipe the Spanish king.

"And this poor man was absolutely unsuited to that job," van Kampen says. "He really had a brilliant mind for maths and science and he kind of wanted to be an academic. But he had a very, very severe bipolar disorder. And he found life terribly painful and difficult."

With no other medical options, the queen tries a kind of baroque music therapy. She travels to England to ask Farinelli, an operatic superstar, to sing for the king. That's the subject of van Kampen's new play, Farinelli And The King.

"We know historically that the singing of Farinelli had a huge impact on this king and enabled him to return to his functioning self," Rylance says. "But we don't really know why or how. We also don't know why Farinelli decided to give up his whole career — in my understanding a career equivalent to Michael Jackson's in terms of fame and fortune and adoration. And he gave it all up really at the height of it, to stay and sing for this king."

Farinelli was a castrato — a singer castrated as a child to create an unnaturally high voice. The practice was barbaric — many died from the operation, and many who survived committed suicide. It was outlawed in the 19th century.

Playwright Claire van Kampen says Farinelli sees in the king something of himself.

"Farinelli is a divided person — he's divided from parts of himself, physically," she says. "But psychologically, I feel he's very divided between this person that has been forced to go on and artificially create a persona of this great opera star, but inside he's simply Carlo Broschi — that's his name."

To create that split personality, van Kampen and director John Dove have an actor play Farinelli in the scenes and a countertenor — a male singer with a high voice — sing the part.

The singing Farinelli is played by countertenor Iestyn Davies. He says the king and the singer, each uncomfortable with their public personae, become close friends.

"They kind of recognize something in each other, which throws off the kingship and throws off the stage persona of Farinelli," Davies says. "And they're able to connect on a human level."

Davies is a major opera star and van Kampen says it was a coup to get him to commit to a Broadway run from a first-time playwright. It might also seem a coup to get an actor of the caliber of Mark Rylance for the production — except he happens to be her husband.

"I'm just so proud of her and thrilled for her," Rylance says. "She spent 25 years supporting me and giving me brilliant ideas without anyone realizing it was her. Now, for her to be celebrated for the clever artist that she is, it gives me a great thrill."

Their collaboration was a success on London's West End, and Farinelli And The King is now running on Broadway through March.