Accessibility links
Read 'Em And Weep: Celebrating 35 Years Of Opera Supertitles : Deceptive Cadence In 1983, the Canadian Opera Company was the first to use simultaneous translations projected above the stage. Now it's an expected part of the opera-going experience. 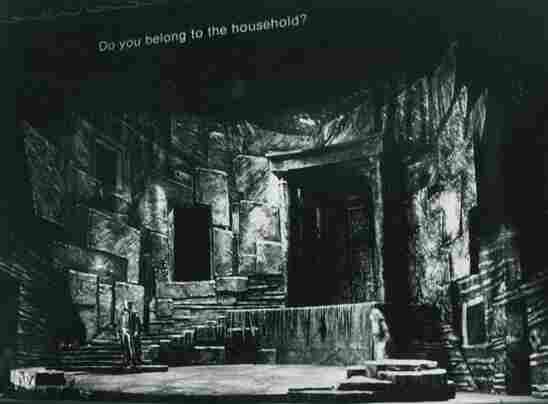 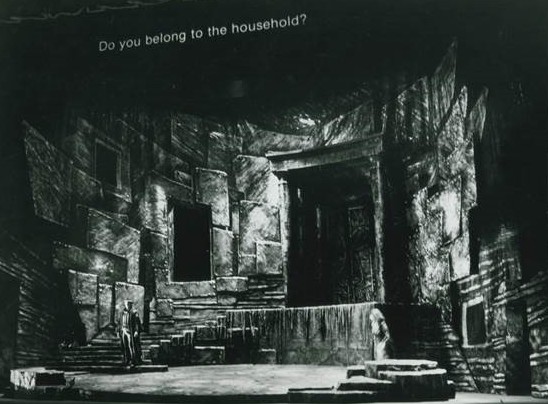 The 1983 Canadian Opera Company production of Elektra, the first to use supertitles.

In 1983, the Canadian Opera Company in Toronto tried a grand experiment. While the singers performed Elektra in German onstage, simultaneous translations in English were projected above the stage. These "supertitles," as they've come to be known, were quickly adopted at opera houses and are now an expected part of the opera-going experience.

The idea came from the company's artistic director, the late Lotfi Mansouri, who recalled in a 2010 National Endowment for the Arts interview that not everyone thought his idea was a good one.

"I got blasted," Mansouri said. "They called it the 'plague from Canada.' I had vulgarized opera, but I didn't give a damn because all of a sudden, the audience was involved."

Deceptive Cadence posts about Talk Like An Opera Geek

The person Mansouri hired to get them involved was Sonya Friedman, who had written subtitles for a Metropolitan Opera television broadcast. The famous soprano Beverly Sills, who served as general manager of the New York City Opera at the time, saw Friedman's supertitles and became an instant fan.

"She decided that she was going to have titles for every one of the foreign language operas at New York City Opera," Friedman says. "And she called me and hired me for that season and I had to do a lot of operas."

"Within six months, over 100 companies were using some system of projected titles," Dreifelds says. She recalls the primitive system they used — projectors and 35-millimeter glass-mounted slides — was like a "glorified home slideshow." Friedman and Dreifelds could only use 40 characters per slide because the screen was so small. Even today, not every word in the opera's libretto gets translated.

Before supertitles, going to the opera required a bit of homework. Marc Scorca, president of the nonprofit organization Opera America, says when he was a kid he had to read a plot synopsis or even a libretto beforehand, because most of the works were in foreign languages.

"It was quite a confusing experience that required of the audience member an absolute determination to figure it out," Scorca says. "There were many people who would not enjoy going to the opera if it was such a mystery and so difficult to figure out what the plot was about."

Jackie Vick, the executive director of Intermountain Opera in Bozeman, Mont., says supertitles are one reason some people drive 400 miles to see the company's productions.

"I think it's one of the best things that could have happened to opera because it opened the door to everyone," Vick says. "It broke down what people considered a language barrier. So people don't have to feel like they need to know it before they come. They can enjoy the show while it's happening."

Thirty-five years later, opera companies around the world use supertitles, but have long since ditched the low-tech slideshow system. Supertitles are now basically PowerPoint presentations. It's cheap and it only takes two people to run, but one venerable company in New York resisted for more than a decade.

"Well, the Metropolitan Opera didn't want titles," Friedman says. "James Levine was the musical director and he felt that it would very much compromise the stage, and also he didn't want to look at them."

But, when a patron donated money to have supertitle screens installed on the back of every seat, Levine finally relented.

Friedman is now in her 80s and semi-retired. She still licenses her supertitles to companies across the country and loves the fact that they appeal to more than just audiences.