Accessibility links
Gennady Rozhdestvensky, An Influential Russian Conductor, Has Died : Deceptive Cadence With work spanning much of the Soviet era, the conductor served as an important and prominent conduit between Russia and the West. He died Saturday at age 87. 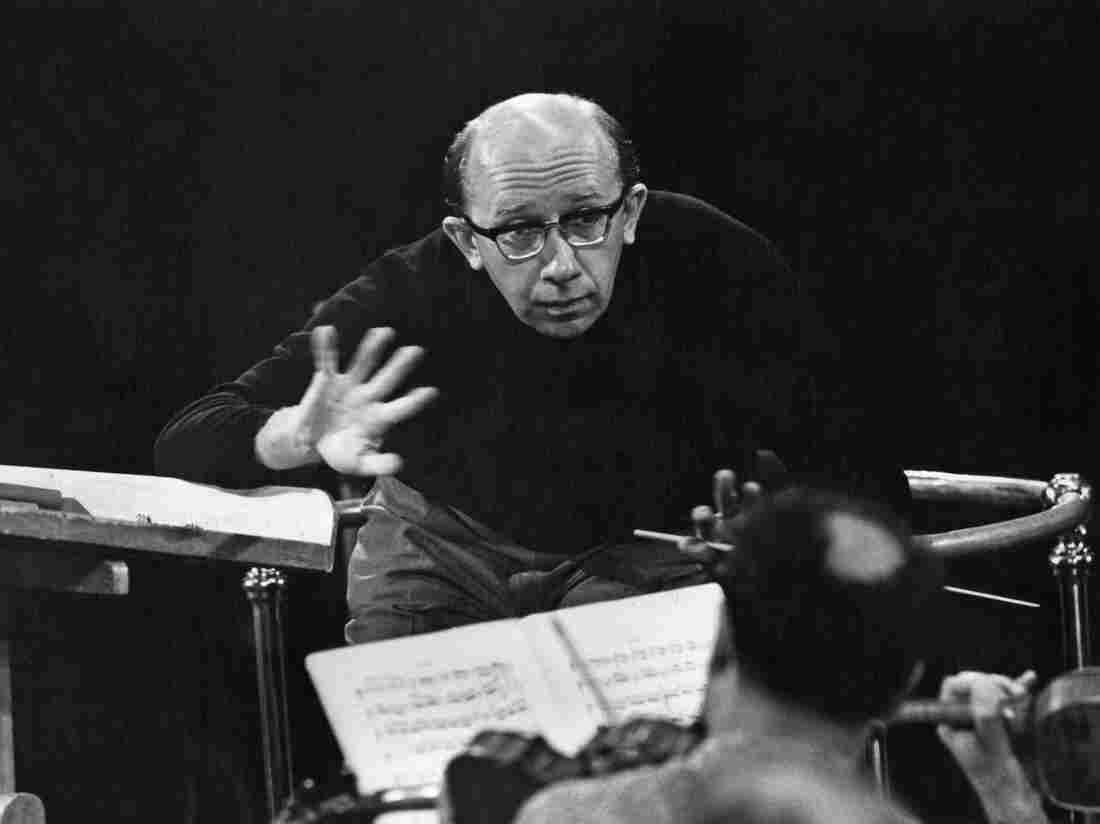 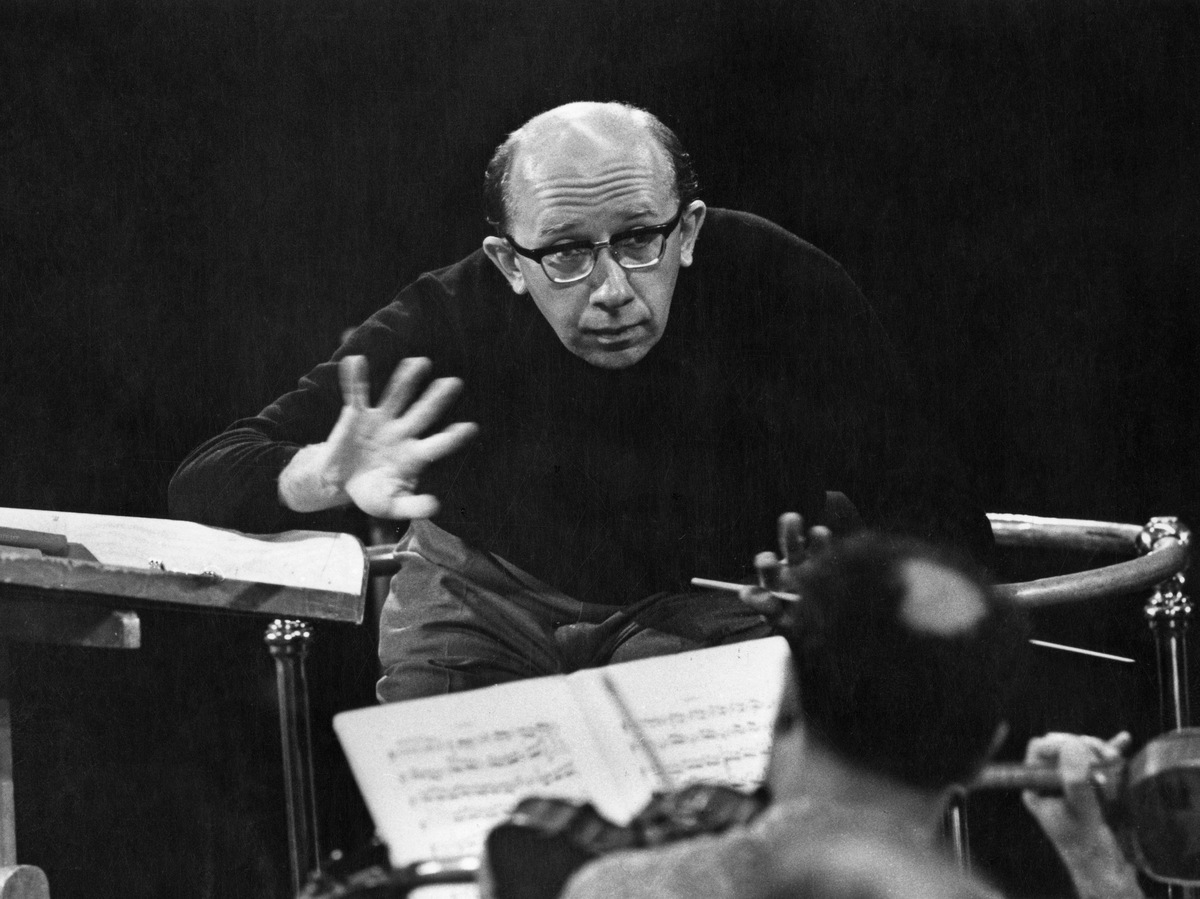 Russian conductor Gennady Rozhdestvensky, rehearsing in 1966 at an unknown location. He died Saturday at age 87.

The conductor Gennady Nikolayevich Rozhdestvensky, an immense presence in Russian musical life during much of the Soviet era and an artist who championed the likes of composers Dmitri Shostakovich, Alfred Schnittke and Sofia Gubaidulina, died Saturday at age 87. His son, violinist Sasha Rozhdestvensky, told the New York Times that his father had battled heart issues, diabetes and cancer, but did not confirm to NPR the location or further details of his death.

Rozhdestvensky often communicated with his musicians not with a baton or hand gestures, but with facial expressions — a raised eyebrow here, an elaborate shrug there.

"If one could explain conducting," he said in a 2003 documentary by Bruno Monsaingeon, "There wouldn't be 1000 conductors, but 10,000. We'd put them in a class and tell them how to spin their arms. Fortunately, some things can't be explained ... in my opinion, the worst approach you can take is to limit teaching to the gestures. Moving your arms is hardly something you have to learn. You have to have a viewpoint, learn how to communicate a musical idea to the orchestra and through it, to the listener."

Although he was best known internationally for his work within the Russian repertoire, and most especially with the living Russian composers of his prime, including Shostakovich, Gubaidulina and Schnittke, Rozhdestvensky also brought foreign works to his home audience, including the first performance in Russia of Benjamin Britten's opera A Midsummer Night's Dream and the first complete cycle of Ralph Vaughan Williams' symphonies. With the Soviet orchestra, he recorded the complete symphonies of Shostakovich, Alexander Glazunov and Alfred Schnittke — and also Anton Bruckner and Arthur Honegger — for Melodiya, the Soviet state-owned record label for which he was one of the earliest and most prolific recording artists.

Rozhdestvensky often chafed at the artistic limitations that the Soviet government placed on him, and his performances sometimes skirted the lines of what the Soviet system found sanctionable. Among the works that the conductor championed was Dmitri Shostakovich's 1921 opera The Nose — a wry, bracing and absurdist satire inspired by a Gogol short story, which Rozhdestvensky daringly revived in the then-Soviet Union in 1974. That same year, he led the world premiere of Schnittke's brash and densely populated First Symphony in Gorky, far away from Moscow's ears.

At the same time, he was put forth and promoted as a model Soviet artist, being awarded the People's Artist of the USSR prize in 1976 and named a Hero of Socialist Labor in 1990. He was also allowed to travel abroad for work, including to serve his posts in Stockholm and Vienna during the 1970s and '80s.

As the Soviet system crumbled, however, Rozhdestvensky felt comfortable enough to complain to the New York Times about the state's stranglehold on cultural life: "I want to be able to work freely," he told the paper in 1988, when the visiting New York Philharmonic played side-by-side with the Soviet State Symphony Orchestra for a landmark concert in Moscow's Gorky Park. Referring to the state-controlled concert agency, which at the time held the sole right to arrange his concerts both domestically and abroad, the conductor said: "It is too difficult for me to work with such a bureaucratic machine. It interferes with my creativity and with my art. I love working here, but not with them. In Russian we have a saying: 'A spoonful of asphalt in a cask of honey.'"

Born May 4, 1931 in Moscow, Rozhdestvensky seemed predestined for a life in music. His mother, Natalya Rozhdestvenskaya, was a soprano; his father, Nikolai Anosov, was a noted conductor and teacher. Unusually for that time and place, Rozhdestvensky took on his mother's surname rather than use Anosov — possibly simply to distinguish himself from his father, but it was a tactic that also helped him to dodge accusations of nepotism as he rose in his career. (That being said, Rozhdestvensky studied conducting with his father at the Moscow Conservatory of Music before being named as a conductor at the Bolshoi Theatre at age 20.)

Rozhdestvensky married the pianist Viktoria Postnikova in 1969; his recordings with her include the Tchaikovsky piano concertos for the Decca label. He is survived by his wife and their son Sasha, with whom he recorded the first violin concertos of Shostakovich and Alexander Glazunov. As a family, the three musicians recorded Schnittke's Concerto Grosso No. 6, which the composer wrote for them.