Accessibility links
A New Piano Concerto For The People : Deceptive Cadence Thomas Adès' Concerto for Piano and Orchestra riffs on the old classics while speaking in the distinctive voice of a 21st century master composer.

A New Piano Concerto For The People

A New Piano Concerto For The People 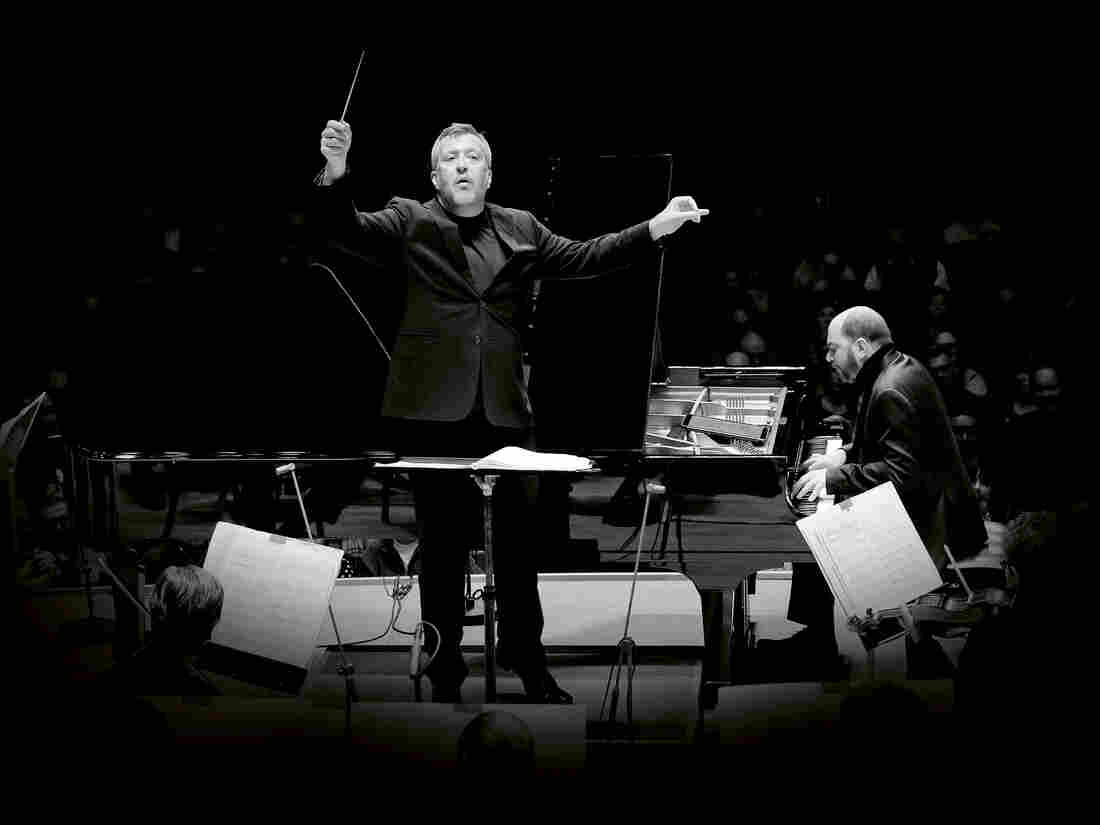 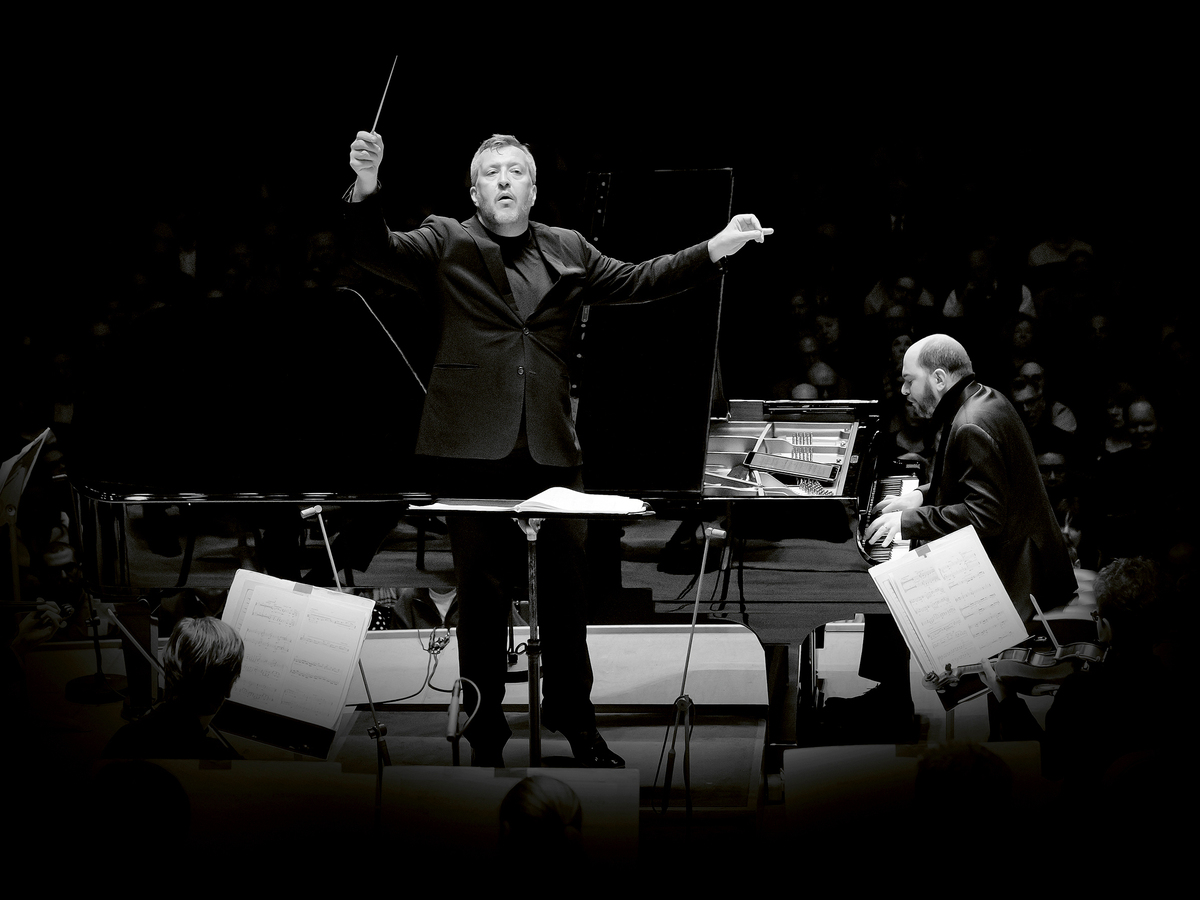 British composer Thomas Adès leads the Boston Symphony Orchestra, and soloist Kirill Gerstein, in the premiere performances of his Concerto for Piano and Orchestra at Symphony Hall in Boston.

Sometimes old recipes, newly tweaked, can yield astonishing results. Consider the concerto: It might be a 400-year-old formula, calling for a soloist to perform with — and often battle against — an orchestra. But occasionally, a brand new concerto arrives that offers old-fashioned thrills. The Concerto for Piano and Orchestra by the redoubtable British composer Thomas Adès relies on some of the old ingredients, but punches through with enough sparkling opulence and irrepressible delight to silence any classical music pessimists. It may be the most attractive concerto so far this century.

Like Quentin Tarantino, whose movies filter classic Hollywood genres through a contemporary lens, Adès tips his hat to classic concertos, with a sly wink. He borrows the three-movement, fast-slow-fast game plan from Vivaldi's heyday, a sonata form blueprint from the age of Mozart and a style of barnstorming theatricality that conjures the era of the romantic virtuoso. The piece premiered last year when the composer conducted the Boston Symphony Orchestra with soloist Kirill Gerstein, for whom the concerto was written. A recording made from those live performances has just been released as Adès Conducts Adès, which pairs the concerto with his Totentanz (Dance of Death), a kind of foreboding cantata scored for huge orchestral forces and voices.

For Gerstein, a pianist as thoughtful as he is masterful, Adès is able to reference traditional models without being derivative. "He's comfortable being original and referring to his predecessors," Gerstein says from his base in Berlin. "There is clearly Ravel, Prokofiev and Liszt and Rachmaninov and Beethoven and much else. But at the same time, none of it is, in my opinion, populist. It's all very much through Tom's prism and through Tom's originality."

The concerto isn't the only piece Adès, a fine pianist himself, has written for Gerstein. From his opera, The Exterminating Angel, he fashioned the Berceuse, for solo piano. (Gerstein made a premiere recording of the piece for a forthcoming video in NPR Music's Tiny Desk series.) The two struck up a musical relationship performing Stravinsky together in 2006 and have since continued to inspire each other. Gerstein says that while the concerto isn't a musical portrait of him, the piece is "an organic reflection of our musical and personal friendship."

A compact 22 minutes, the concerto begins with a bang of the kettle drum, which the composer says is like knocking on the door of an old cupboard. "Then you try the handle and the door pops open and the piano concerto falls out," Adès says with a laugh, speaking from his home in London. The hummable opening theme has been compared to the syncopated phrases of Gershwin's "I Got Rhythm" — a fitting match for Gerstein, who studied jazz at the Berklee College of Music and has made Gershwin's Rhapsody in Blue a career specialty.

The other virtuoso in the recipe is the orchestra, rendering Adès' musical kaleidoscope in transparent colors and whiplash rhythms. Some combinations might seem outlandish — like a xylophone and piccolo jostling, in a kind of Messiaen-induced glee, above thunderous drum wallops at the close of the first movement. The concoctions are bold and tremendously difficult for the performers, but they never seem manufactured only for effect. Adès says while it's perverse for composers to write music that's next to impossible to perform, he does admit, "I can't resist things being astonishing." This concerto, without doubt, gets a gold star in that department.

With an architect's eye for contraction and expansion, Adès pulls us down a narrow, bustling hallway in the first movement, opening to an unbounded space of resplendent sorrow in the central Adagio. Gerstein floats a slow, searching melody of uncommon beauty above sighing winds and brass. It's the kind of music that, in its heartbreaking elegance, can make you tremble. That is, until the electrifying finale ignites — and then, Gerstein tumbles down the keyboard while a clarinet squeals. Near the end, a mysterious moment hovers before the chaos returns with cascading octaves for Gerstein, who also pounds cluster chords with the palm of his hand. It all ends with the bang of the bass drum and the crack of a whip.

But the concerto is more than just razzle-dazzle virtuosity. If you're willing to buckle up and be whisked away, the music, like all great art, offers a journey. "It's like you feel something, some great problem, which you can't put into words, has been expressed and argued and then sort of resolved at the end," Adès says. "It's an extraordinary, weird thing about music."

While composing the piece, conventionally titled Concerto for Piano and Orchestra, Adès says he didn't really know what to expect. "This one I'm going to plant in the soil exactly as it's supposed to be planted and see what grows," he recalls thinking.

What grew was an engaging concerto that riffs on the classics of the past while speaking the singular language of a contemporary master. And now, less than a year since its world premiere, the concerto has racked up another dozen performances, with 37 more on the books. Those are astonishing numbers for a brand new work, practically guaranteeing a place for it in the repertoire. Adès didn't plan for a hit, but it looks like his concerto is quickly becoming exactly that.