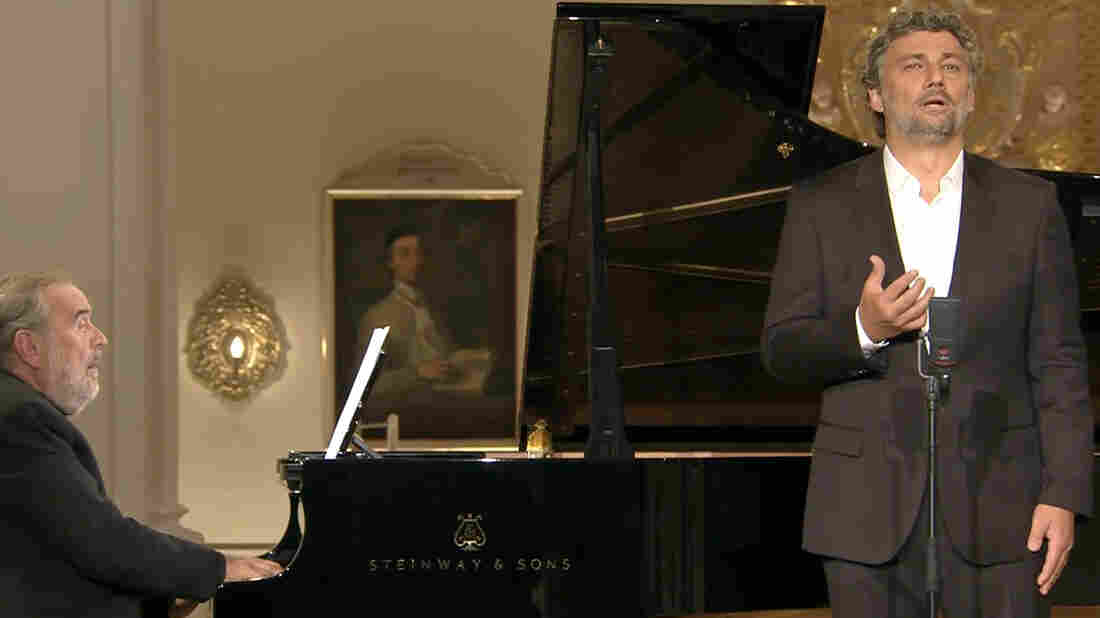 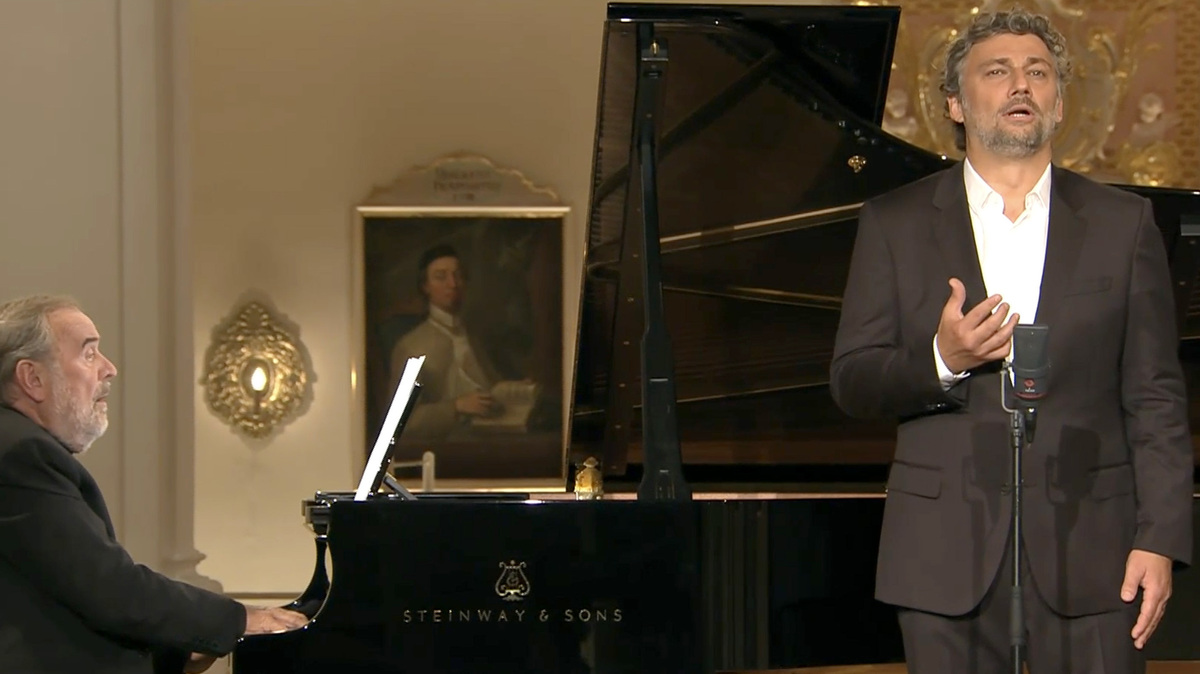 Tenor Jonas Kaufmann, with pianist Helmut Deutsch, in recital at a Baroque abbey in Bavaria. The performance was part of the Metropolitan Opera's new live streaming series.

The series, which streams live every other Saturday at 1 p.m. ET, for a $20 ticket price, features top singers in recital at highfalutin locales. (The concerts are available for another 12 days on demand.) On Saturday, soprano Renée Fleming sang at a storied mansion in Washington, D.C. Two weeks earlier, tenor Jonas Kaufmann kicked off the project from a gilded former abbey in Bavaria. Future venues will find Roberto Alagna at a chateau overlooking the French Riviera and Anna Netrebko ensconced in an Austrian palace.

Since opera's social status has long ranked with the moneyed classes (cue the minute-long Rolex commercial at the top of the show), you'd think the Met would try to play that side down a bit, at a time when people are protesting in the streets, keenly aware of the country's widening wealth gap. Peter Gelb, the Met's general manager, needn't look far for a decent enough example on how to tailor the optics. In April, the company presented its At-Home Gala, a live stream of some 40 opera luminaries belting out arias from their living rooms and kitchens. It was a viewer-friendly fundraiser, but it was also grand opera with its hair down.

Why not take this opportunity, while the Met and its season are shuttered, to rethink the image? At least let the performers dress down, and place them in less glitzy locales – perhaps a pub or an outdoor space with acceptable acoustics. But instead, especially with Kaufmann's recital, the company has doubled down on the hoity-toity, presenting an experience lacking in warmth and redolent of privilege. Is this what opera fans, and those curious about opera, want? Is this what the Met wants them to want? After all, we are talking about an institution, America's largest performing arts organization, that has yet to produce an opera by an African American composer and has only mounted works by women twice – in 1903 and 2016.

Kaufmann, a leading tenor worldwide, sang a herculean program, spanning a dozen of opera's biggest, lung-busting favorites, accompanied by pianist Helmut Deutsch. He was in spectacular voice, offering his signature burnished, baritonal timbre mixed with honeyed high notes sung in mezza voce (half voice). The final B-flat in Georges Bizet's "Flower Song," from Carmen, was delivered with an extraordinary messa di voce, a vocal technique that displays a gradual crescendo and decrescendo on a single extended note. Later in the recital, Kaufmann even surprised himself when, after a heartbreaking performance of "Federico's Lament" from Cilea's L'arlesiana, he looked visibly shaken.

If only everything around his fine performances had been different. Kaufmann sang at the historic Polling Abbey, outside of Munich. The cavernous room, with its vaulted ceilings and golden sconces, was lit like a hotel lobby. Robotic camera movements zigzagged between gilded pillars, as if in a dated video game.

The Met Opera hired Christine Goerke, a reigning dramatic soprano, to host the series. While she offered a genial presence, she was trapped by a banal script, which included lines such as, "That was stirring to say the least," and "From impassioned Puccini, we now move into some French repertoire." Unlike Fleming during her recital, Kaufmann never acknowledged his viewers. The mood, apart from the nuanced singing, was cold and hollow. Only after his final aria – the ubiquitous "Nessun Dorma," in an undercooked performance – did Kaufmann address the camera, saying what a privilege it had been to sing. "I want to give the privilege back," he said, "by at least donating $5,000 out of my pocket for all those other artists that unfortunately don't have the chance to perform in these times." A nice gesture.

Fleming's recital on Saturday, with pianist Robert Ainsely, appeared more in tune with the moment. She opened with a brand-new work, written for her by John Corigliano, a song of hope and reflection titled "And the People Stayed Home," sung a cappella and set to the popular text by Kitty O'Meara. She followed with "Calm thou my soul ... Convey me to some peaceful shore," by Handel. Always a good talker, Fleming mused on how two works written over 300 years apart shared essential human emotions.

The setting was sheer opulence, amid the inlay-choked music salon of the Dumbarton Oaks mansion in Washington, D.C.'s posh Georgetown neighborhood. But this time the lighting was warmer, the feel more intimate. (Perhaps it was all the hanging tapestries.)

Although "America's Diva" has been distancing herself from staged opera performances over the past few years, Fleming's voice, while growing darker, has retained most of its creamy texture and silvery tones. To close out Puccini's "O mio babbino caro," she held the final note in a perfectly supported pianissimo for nearly 20 seconds.

As with the Kaufmann recital, the Met gave Fleming downtime between sets, returning to the New York broadcast booth, where Goerke introduced clips of Fleming's "illustrious career," including her most pop culture moment when she sang the national anthem at the Super Bowl in 2014 — the dress she wore resides at the Smithsonian's National Museum of American History. We could use more moments like that, where opera and the general populace meet at the 50-yard line.

In a 2006 New York Times story, Gelb talked about building "bridges to a broader public." That was the year he began beaming live Met performances into local movie theaters in 70 countries. A brilliant idea.

In an awkwardly realized moment with Goerke at the beginning of the Kaufmann show, he said the Met Stars series was "trying to keep our audiences in touch with our great artists." But if you are positioning your artists in ridiculously luxuriant venues, how "in touch" with them are we really feeling?