Accessibility links
At The La Maestra Competition, Women Conductors Are The Rule, Not The Exception : Deceptive Cadence La Maestra, held in Paris this September, is the first fully realized competition solely for women conductors — an effort to help balance a male-dominated field. 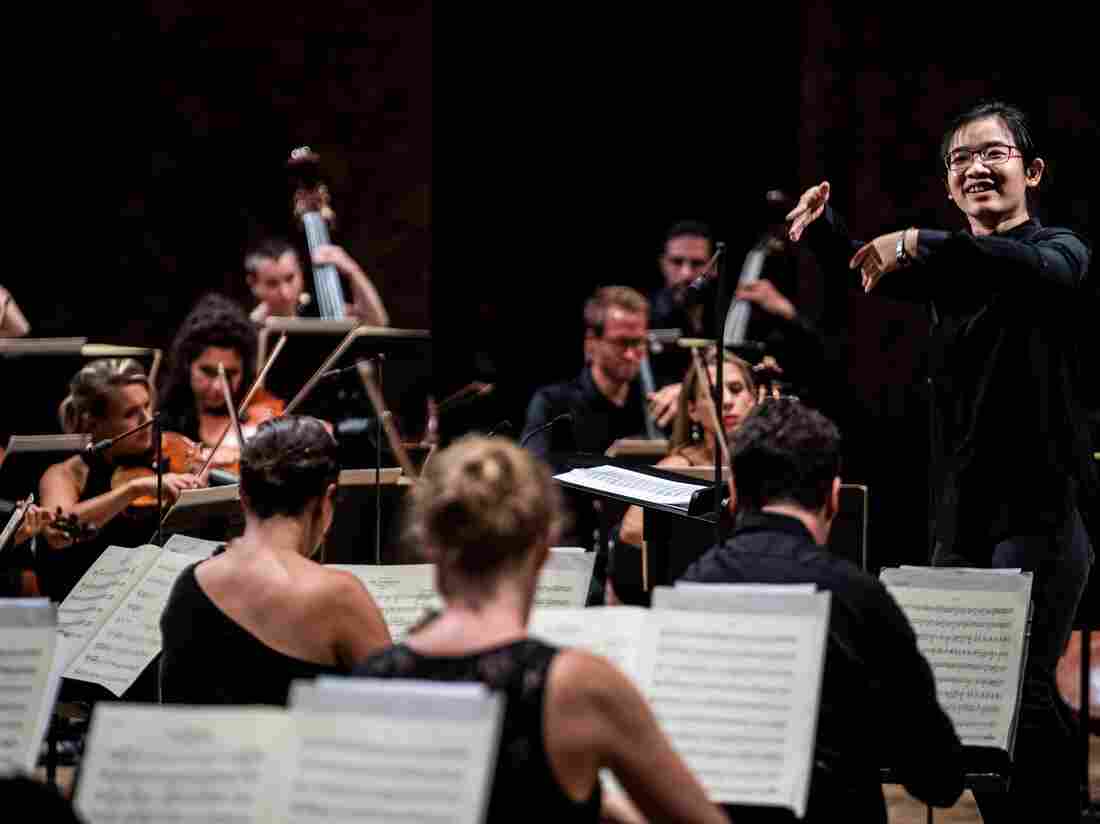 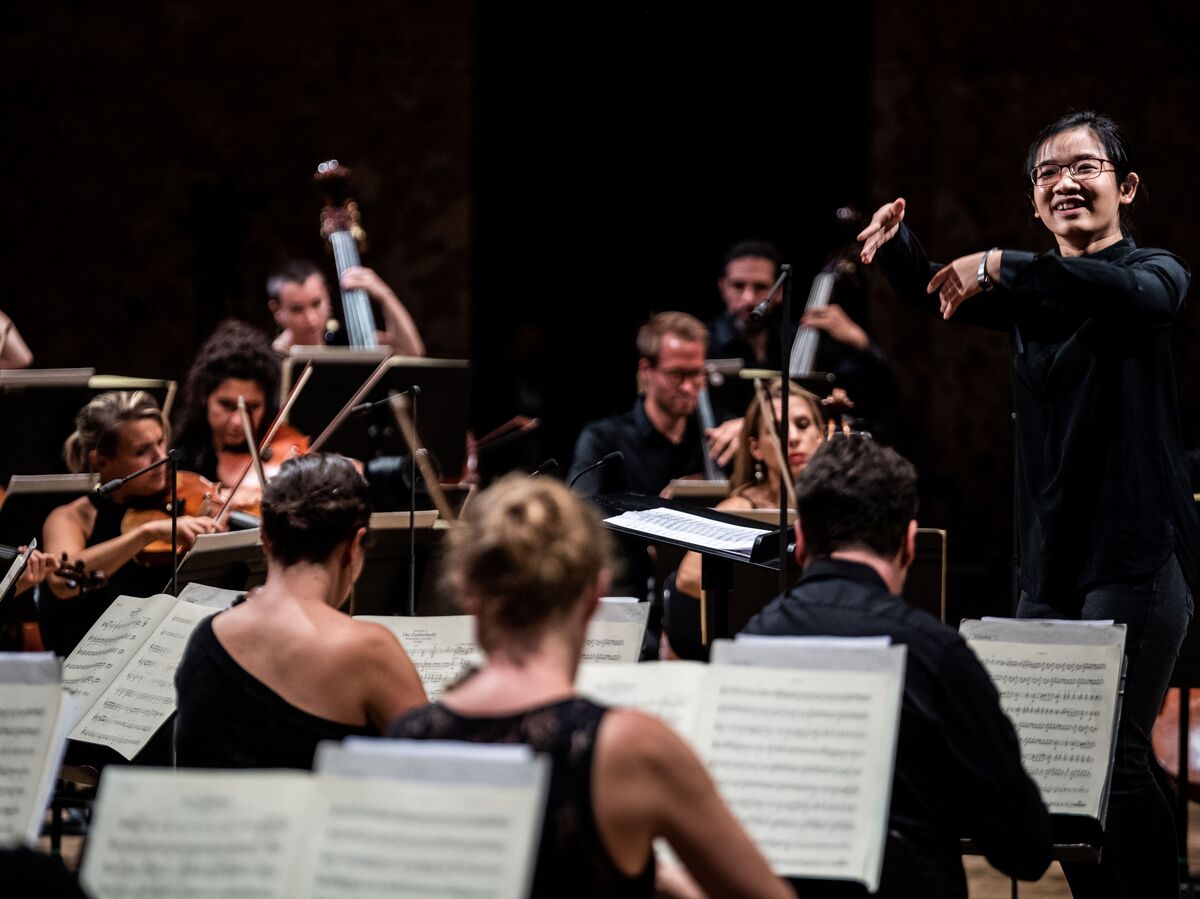 Chinese conductor Jiajing Lai performs in the first edition of La Maestra, an international competition for women conductors, held at the Philharmonie de Paris this September.

In the orchestra world, conducting and music directing are still male-dominated fields. In the United States, less than 10% of orchestras are directed by women. In Europe, the figure for major orchestras is less than 6%.

Founders of La Maestra, a Paris-based organization, set out to change that by promoting the talent of budding female conductors in their very first competition, held in mid-September. Out of more than 200 applicants, 12 female conductors from across four continents competed for three top prizes, including cash, mentoring and a series of concerts conducting orchestras in France and abroad.

"People say, 'Is it really necessary to have these opportunities for women? It seems discriminatory toward men,' " says Marin Alsop, a competition judge who leads both the Baltimore Symphony Orchestra and the ORF Vienna Radio Symphony Orchestra. "All I can say is that men have had hundreds of years to open the door to women and they chose not to. This isn't really about competing. It's about creating community and a support system for these women to grow and become great artists in their own right."

Gladysmarli Vadel, a 25-year-old conductor from Venezuela who has played the violin since age 4, advanced to the semi-finals. Traveling to the competition marked her first time leaving the country and her first time on a plane.

"I love the violin in the orchestra — I adore it," Vadel says. "But when I played, I felt an emptiness. Something was missing, until one day I was joking around with friends, telling them, 'I'm going to imitate the conductor, and you will be my orchestra.' I was just joking around back then, but who would have known that it would become my inspiration to become a conductor today?"

The six semi-finalists each got 50 minutes to conduct the Paris Mozart Orchestra in works by Beethoven, Schumann and a new piece written for the competition. That the competition was originally slated for March, but the pandemic caused a delay. The rescheduled event featured a reduced orchestra on stage and a spaced, masked audience. But Claire Gibault, one of the founders of La Maestra, says the conductors still faced challenges.

"Traveling was difficult and some of the contestants had not conducted for six months, because there were no events in the artistic world," Gibault says. "So some of the women were a little fragile."

To lead an orchestra, you have to exude a certain confidence, according to Vadel. "If the orchestra feels the conductor's confidence, they will trust in you," she says. "And they'll be able to do everything you want to convey. It's the most important thing."

Fellow semi-finalist Stephanie Childress displayed a knowledge and authority well beyond her 21 years. The Franco-British conductor reminded the musicians that Schumann made corrections to his score just before entering an asylum.

"This is a tempestuous piece that he revised during very turbulent times," Childress says. "And I think that's a big part of being a conductor — you've got to not only have the technical aspect of things sorted, you have to be kind of mildly charismatic and also passionate about the music [so] you can instill that in the people around you."

Childress, whose parents she describes as old rockers, grew up listening to Queen and Tina Turner. She attended her first classical concert at age 4, where she heard the genre-bending violinist Nigel Kennedy play Vivaldi's Four Seasons. "He was jumping around and having so much fun, having a whale of a time and, I thought, 'Wow this seems quite interesting, this classical music business.'"

There has been some progress in putting women on the conductor's podium. But Gibault, who was the first woman to lead Milan's La Scala orchestra and the Berlin Philharmonic, says we can't afford to wait 50 more years for things to get better.

"We sent out a call to the whole world with very demanding criteria," she says. "We attracted 220 candidates from 51 nations. They were all excellent, and it was really hard to choose."

The jury awarded Stephanie Childress second place, and Gladysmarli Vadel got the orchestra prize. All entrants will continue to receive support and advice from La Maestra, in a push to give more visibility to talented female conductors.