More than 700 miles separate Tuscaloosa, Alabama, and Topeka, Kansas. But about one in three black students in the Alabama city today attend a school that could just as easily be in the Jim Crow days of the 1950s, ProPublica reported on Saturday.

Reporters visited two Tuscaloosa high schools — one all black, one integrated — and asked journalism students to document race and education through photos and six-word essays. 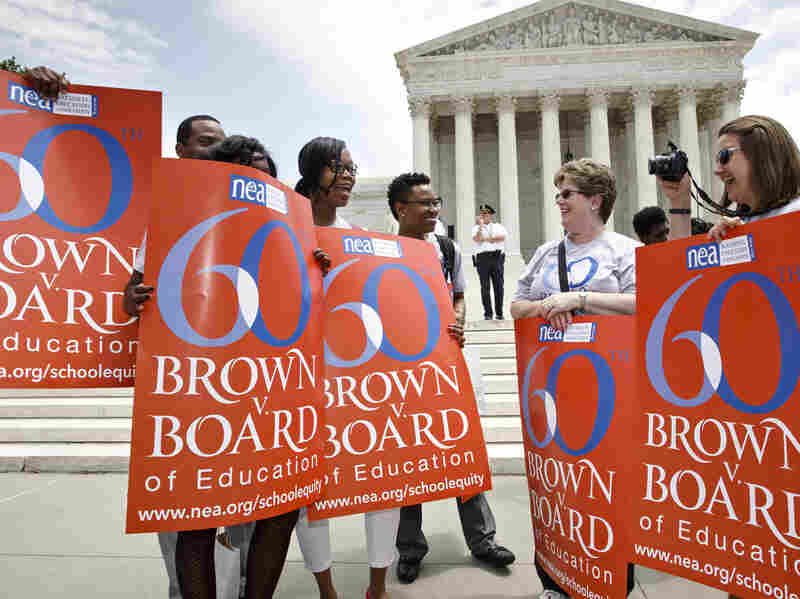 National Education Association staff members joined students, parents and educators at a rally at the Supreme Court in Washington on the 60th anniversary of the Brown v. Board of Education decision. AP hide caption 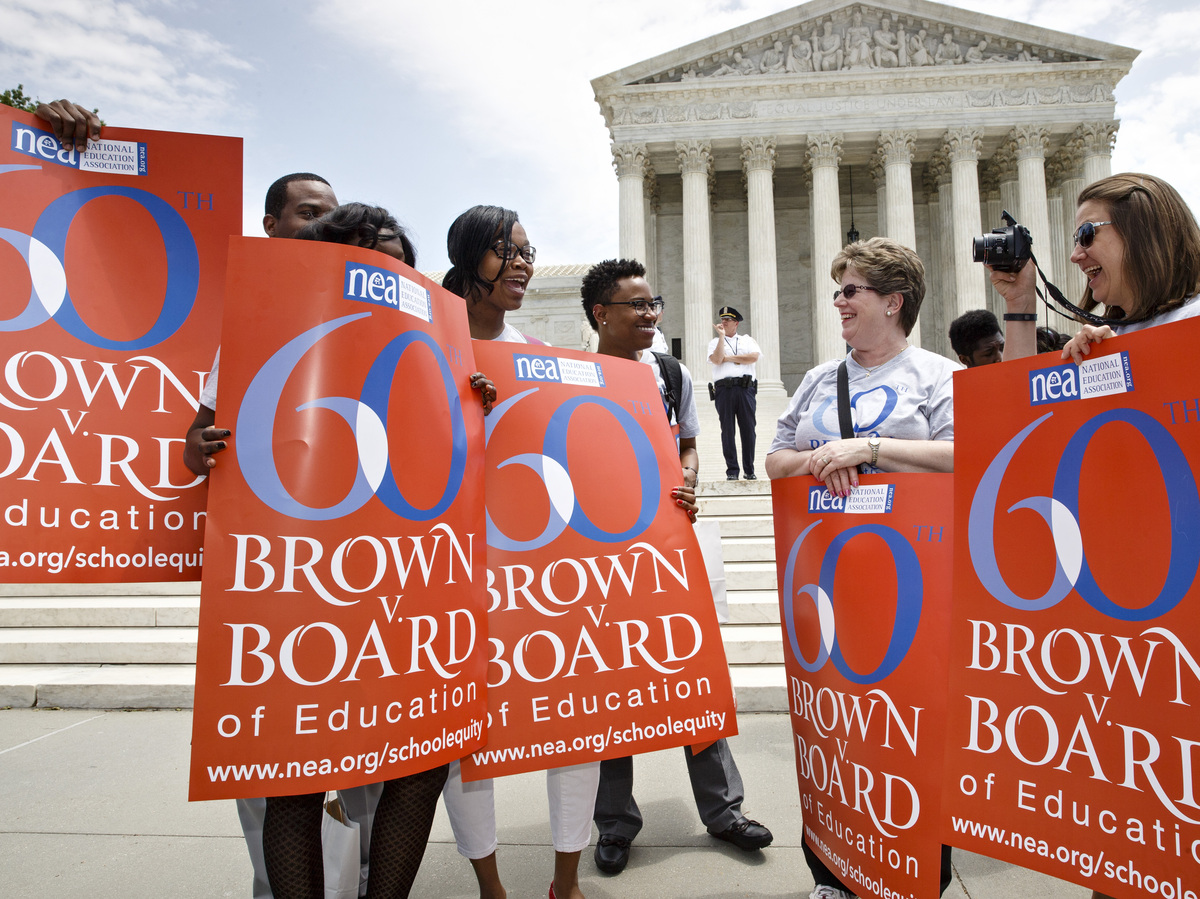 National Education Association staff members joined students, parents and educators at a rally at the Supreme Court in Washington on the 60th anniversary of the Brown v. Board of Education decision.

The reporting was one of many examples of the opportunity offered by the 60th anniversary on Saturday of the Supreme Court's ruling in Brown v Board of Education of Topeka for news organizations to examine race, inequality and education in the U.S.

Here's our look at must-read coverage of the legacy of the Brown decision.

First things first, of course: NPR marked the moment with several stories and interviews largely playing off the notion of how far the country has come from the black-white landscape of 1954.

Our Claudio Sanchez examined the debate in policy circles – and in schools — over how issues of segregation and inequality in education have become inextricably linked with poverty. Shereen Marisol Meraji reported on the legacy of the 1947 Mendez decision that was a victory for Latino students and families in California. And Karen Grigsby Bates noted that, for some black Americans who are old enough to remember life before Brown, there's some nostalgia for what's been lost.

And there was plenty of other rich and nuanced reporting.

The Columbus Dispatch reported on how the promise of Brown is playing out in Ohio, noting that charter schools are some of the most segregated in the city. About 70 percent of charter students are black, the paper said.

The Civil Rights Project at UCLA released data finding school segregation on the rise since 1990, and that black students nationwide attend schools that are significantly more segregated than they were in 1970. It's statistics like these that led Lee C. Bollinger to wonder in The New Yorker whether "the noble dream expressed in Brown, of creating an inclusive and integrated society is on the precipice of being forgotten."

First Lady Michelle Obama spoke to graduating high school students in Topeka. She said that despite Brown's promise, "many young people are going to school with kids that look just like them."

The New York Times described her speech as "part commencement address, part policy pronouncement, and part journey into her own past," while POLITICO noted that the Obama administration has "revived a federal interest in desegregation issues."

When the Supreme Court decided Brown 60 years ago, the Internet didn't exist, let alone Twitter. But staff members at the Brown v. Board of Education National Historic Site in Topeka are using the service to imagine what things would have looked like if it did.

The effort started with a tweet from a fictional account for Ellis McKay, the Supreme Court clerk who went to the court's basement on May 17, 1954, to pick up copies of the ruling, the Topeka Capitol-Journal reports. From there, staffers have continued to tweet, using dozens of fictional accounts, including ones for Chief Justice Earl Warren and Georgia Gov. Herman Talmadge, to replay events in "real time."

Over the course of the weekend, the account re-enacted the events of May 17, 1954 and the month that followed. To see more, search using the hashtag #Brown1954 on Twitter, or @BRVB_NHS.