Accessibility links
The Crisis In The 'Ivory Tower' : NPR Ed A new documentary takes on the storied past and uncertain future of higher education.

The Crisis In The 'Ivory Tower'

The Crisis In The 'Ivory Tower'

Ivory Tower is a new documentary by Andrew Rossi (Page One: Inside the New York Times.) 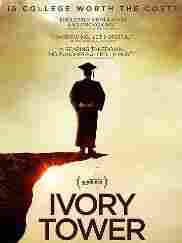 Ivory Tower is a new film about higher education at a crossroads. CNN/TakePart hide caption

A trillion dollars in debt. Financial outlook downgraded. Skyrocketing prices, yet falling or stagnant revenue for 40 percent of the sector. Government threatening to increase regulation.

By the standards of Wall Street, higher ed is in deep trouble.

But, of course, the university isn't held to the standards of Wall Street — or not just those. It's also the place for laboratories full of new research and libraries full of great books and football stadiums full of cheering fans. Most importantly, it's central to the American dream — a promise, backed with significant public support, that every kid who works hard and plays by the rules will have a chance to succeed. Which is why the turmoil today in higher ed feels like such a betrayal.

Ivory Tower, a new documentary from CNN and Participant Media opening in theaters next month, attempts to unpack that complexity. Turmoil is nothing new to filmmaker Andrew Rossi. His previous film, Page One: Inside the New York Times, explored another troubled American institution.

"When I began thinking about an investigation into the value of college, one of the key inspirations was the theme of disruption, driven by the promise of Massive Open Online Courses [MOOCs] and the crisis in student loan debt," Rossi says. He wondered when the higher education dream began to curdle, and why.

"How could it be that wealthy, levelheaded entrepreneurs like Peter Thiel were offering students $100,000 to drop out of excellent colleges? Could the state of teaching and learning on campuses have become so out of whack?"

Rossi features lots of critical talking heads, including Andrew Delbanco (College: What It Was, Is, and Should Be); Richard Arum (Academically Adrift: Limited Learning on America's College Campuses); Elizabeth Armstrong and Laura Hamilton (Paying for the Party: How College Maintains Inequality); and yours truly (Generation Debt and DIY U:The Coming Transformation of Higher Education).

More important than us journalists and pundits, students drive the narrative in Ivory Tower. The film visits many campuses across the country, and tells two stories in detail. One is the inspirational tale of David Boone, an African-American born to a teenage single mother, whose family was homeless just before he got into Harvard. The other track goes in a very different direction, exploring the 2013 decision at Cooper Union to charge tuition for the first time since its 1859 inception. Founder Peter Cooper intended for the college to provide a free education, but the school fell victim to financial mismanagement. In gripping footage shot partly by the subjects themselves, we watch working-class student artists-turned-activists take over the office of president Jamshed Bharucha. Their organizing efforts continue today.

The film is long and dense yet incomplete. It doesn't take on community colleges at length or for-profits at all. And its treatment of higher ed's future is a little unsatisfying — partly because disruptive innovation and its consequences are so unpredictable. While the hype over MOOCs has mostly subsided, free video-based content is here to stay, and the conversation is quickly moving on ... to learning analytics, competency-based degree programs, and plenty more big ideas that we plan to cover here.

Still, as a well-crafted introduction to the current state of the university, Ivory Tower is poised to make some noise.