Accessibility links
Why NYC Is Afraid Of Free Lunch For All : NPR Ed A federal program to extend free lunch to all kids has the city worried it could lose federal dollars to pay for other things.

More than 30 million kids a year participate in the National School Lunch Program, getting free or reduced-price meals at school. Hunger experts believe many more qualify but don't use it because a.) their families haven't filled out the necessary paperwork or b.) they don't want to be seen as poor.

Well, the federal government is expanding a program that could help schools clear both of those hurdles. It allows all children to eat for free in districts that meet certain requirements. Several big cities have already signed up, including Detroit and Chicago. But New York City isn't so sure. 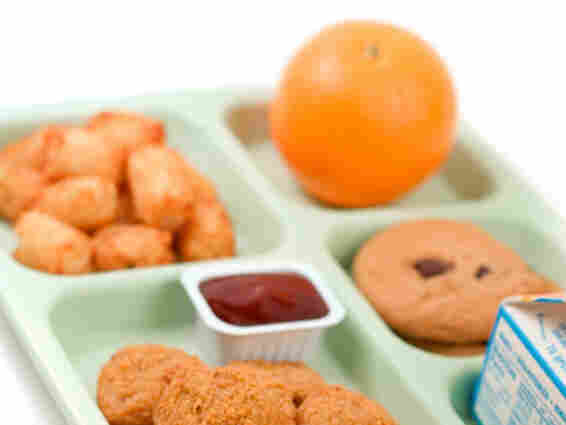 In New York, three-quarters of all students qualify for free or reduced-price meals, but a third of those simply don't participate. iStockphoto hide caption 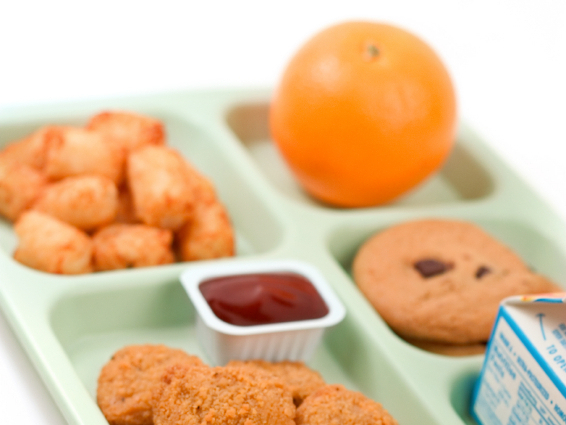 In New York, three-quarters of all students qualify for free or reduced-price meals, but a third of those simply don't participate.

At the East-West School of International Studies in Queens, almost two-thirds of the nearly 640 students at the combined middle and high school are poor enough to eat for free. Lunch costs just $1.75 a day, but seventh-grader Jenna Choi says that can be tough, even for those who make enough money to pay.

"The people that do make money," Choi says, "I think it's just to get them by. Like my family. We just make money to get us by."

Staff members at the school say that sentiment is pretty common in this working-class neighborhood of largely Asian immigrants.

The income threshold to qualify for free lunch is about $40,000 a year for a family of four. But kids can't actually get the meal until their parents fill out a form verifying their income. For school aide Sherry Taylor, collecting those forms is a big part of her job — and exhausting.

"It's a constant, constant battle" with students "to bring it back, or they forgot something, or the parent doesn't want to put the Social Security card number on, or they haven't signed it," Taylor says.

And, Taylor adds, some families are simply too embarrassed to reveal their income. These are just some of the reasons anti-hunger advocates want New York City to join this expanding federal program that allows all kids in a given district to eat for free. No more forms. It started three years ago — in Michigan, Illinois and Kentucky — and has since moved across the country.

Under the new program, instead of spending time collecting income forms, a school district uses data it already has on the number of families receiving food stamps, cash assistance and Medicaid. As long as it can prove at least 40 percent of its students qualify for some kind of help, everybody eats for free. Plus, nobody has to turn in a form. Madeleine Levin has been studying the program for the Food Research and Action Center in Washington.

And, Levin adds, more kids eating lunch means more kids who are better able to concentrate in the classroom.

This lunch-for-all model also erases a socioeconomic stigma. Advocates say high school kids who can't afford a cafeteria lunch will often skip the free lunch too — because they don't want their classmates to know they're low-income.

That's right. Lunch for all has a catch. School districts get federal Title I dollars — which pay for lots of different things — based on the number of low-income students they have enrolled. And some districts worry they could get less money if they stop collecting those lunch forms. This is why New York Mayor Bill de Blasio says he supports the goal of universal free lunch. But ...

"We're not yet there for a reason," de Blasio said recently. "We have looked long and hard at the question of what it will do to our federal funding writ large for school food, and we are not convinced at this point that it won't, unfortunately, have the negative impact of reducing our federal funding substantially."

With more than a million students, New York City gets hundreds of millions of dollars a year in federal Title I aid, and here's the problem: Those troublesome little lunch forms play a big role in determining how that money is doled out. Still, anti-hunger advocates say there's nothing to fear. They point to Detroit.

The shrinking, bankrupt Motor City was an early adopter of universal free lunch. And Betti Wiggins, executive director of the Office of School Nutrition for Detroit Public Schools, says moving to the new program had zero impact on the city's Title I funding. Like New York, she says, Detroit also worried about how it would distribute federal aid to its schools if it stopped collecting lunch forms. So it didn't stop. The forms are still being collected — as a backup. The only difference now: A student isn't required to turn one in to get a free lunch.

"I have not had the problems that people say of losing money or having to subsidize," Wiggins says. "As a matter of fact, my enrollment went down 14 percent and my reimbursement went up 16 percent the first year."

In New York, three-quarters of all students qualify for free or reduced-price meals, but a third of those simply don't participate. The City Council is now pressing the de Blasio administration to include universal free lunch in its final budget, which is due by the end of June.