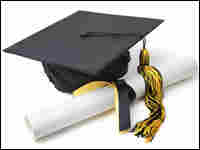 Vocational education has long had a bad rap in the U.S. For years, voc-ed was written off as Plan B for underachieving kids. But the idea of using high school to better prepare students for a changing workforce has undergone a slow and subtle transformation.

For one, it's not called voc-ed anymore. It's career technical education, and the tent's bigger than it used to be. CTE isn't just about auto repair or construction. Career-tech programs across the country are also preparing kids for jobs in fields like health care, design, engineering, and early childhood education.

Career tech has a big champion in President Obama. Just today, he's delivering the commencement address at Worcester Technical High School in Worcester, Mass. It used to be the city's lowest performing high school and ranked among the lowest performing technical or vocational schools in the state. Now it's lauded by top education officials for its sophisticated, school-to-work system.

"This school struggled not too long ago. It had a rich history but became maybe a little bit obsolete, a little behind the times," Education Secretary Arne Duncan said in a visit to Worcester Tech several years ago. "But this school has demonstrated that children, regardless of whether or not you were born with a silver spoon in your mouth, regardless of what your parents' income is, that students can be extraordinarily successful if adults as a team – not as a school, but an entire community – rally behind them."

Kids aren't just being educated at schools like Worcester Tech. They're being engaged. Alison Fraser, author of a Pioneer Institute study of vocational-technical schools in Massachusetts, found that the dropout rate at the state's CTE programs in 2011 was half the dropout rate at its regular/comprehensive high schools.

Worcester Tech's dropout rate in the 2010-2011 school year was just 0.5 percent, while the district-wide dropout rate for the seven high schools in Worcester was 3.7 percent. And the Massachusetts statewide average was 2.7 percent.

Despite the success of schools like Worcester Tech, it's been a long slog for CTE back to relevance.

"For very understandable historical reasons, vocational education carries a certain type of stigma in the United States," says Robert Schwartz, who heads the Pathways to Prosperity Project at Harvard's Graduate School of Education.

"While we've always had pockets of excellence," Schwartz says, "for a lot of kids vocational education became a kind of dumping ground, a place you send kids who you didn't think had academic potential and you need to keep them in school."

Detractors of the CTE model see it as an acknowledgement of defeat. And they worry that, if students focus on a narrow set of technical skills, they'll miss out on bigger things – like literacy, math, and history – that will serve them well in the long run.

Those who support CTE in high school say it's not an either-or proposition. Kids aren't taught marketable, professional skills at the expense of traditional academics. In a vibrant CTE program, they get both. Supporters also argue that CTE gives students the tools they need to leapfrog the kind of low-skill, low-pay jobs now awaiting many traditional high school grads.

According to the Center on Education and the Workforce at Georgetown University, 27 percent of those who get a vocational license or certificate earn more than workers with a Bachelor's degree.

CTE doesn't have quite the same image problem overseas. Many countries do still consider vocational-technical programs a Plan B for underachieving or "problem" students, but in places like Germany, Denmark and Switzerland, voc-ed is also the path of choice for lots of teenagers.

Germany, in particular, is famous for its vocational-technical education. Schools there combine apprenticeships in the workplace with classroom training at state-run schools.

Finland too — the darling of educators, policy-makers and journalists — has worked for more than two decades to reinvent its voc-ed system. Pasi Sahlberg, author of Finnish Lessons: What Can The World Learn From Educational Change in Finland, told The Huffington Post: "nearly 45 percent of Finnish 16-year-olds choose to study in vocational upper secondary schools and 50 percent in academic high schools. Competition to some vocational programs has been fierce. Much of the negative stigma that vocational schools had in Finland 20 years ago is gone."

President Obama highlighted European CTE success in his 2013 State of the Union Address, saying he wants to make sure that a high school diploma in the U.S. puts students on track to get a good job.

"Right now, countries like Germany focus on graduating their high school students with the equivalent of a technical degree from one of our community colleges," he said. "So those German kids, they're ready for a job when they graduate high school. They've been trained for the jobs that are there."

Schwartz, who recently returned from Switzerland, notes that 70 percent of 16 year olds there move into three- and four-year programs that marry strong academics to strong technical education. The program is successful, he says, because there's buy-in from national and state governments as well as from top employers.

"It's a very powerful, very elaborately worked-out system," he says. "But the most important thing is when you talk to 16 or 17 year olds, you just see the degree of engagement, the sense of efficacy, power, the support that they get from adults."

When done well, CTE is no dumping ground. For lots of kids, it's a good fit and a Plan A.