Accessibility links
The Anatomy Of A Dress Code : NPR Ed There are as many opinions on what's "appropriate" as there are threads hanging from those forbidden cutoffs. 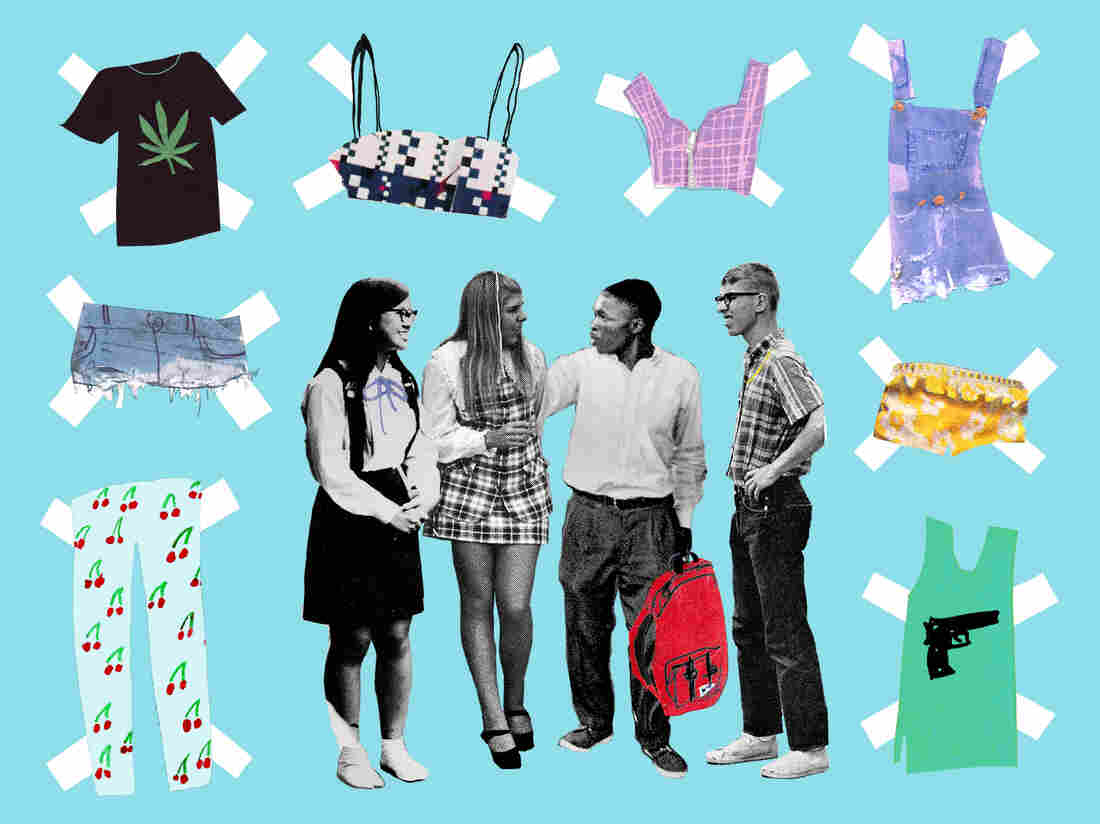 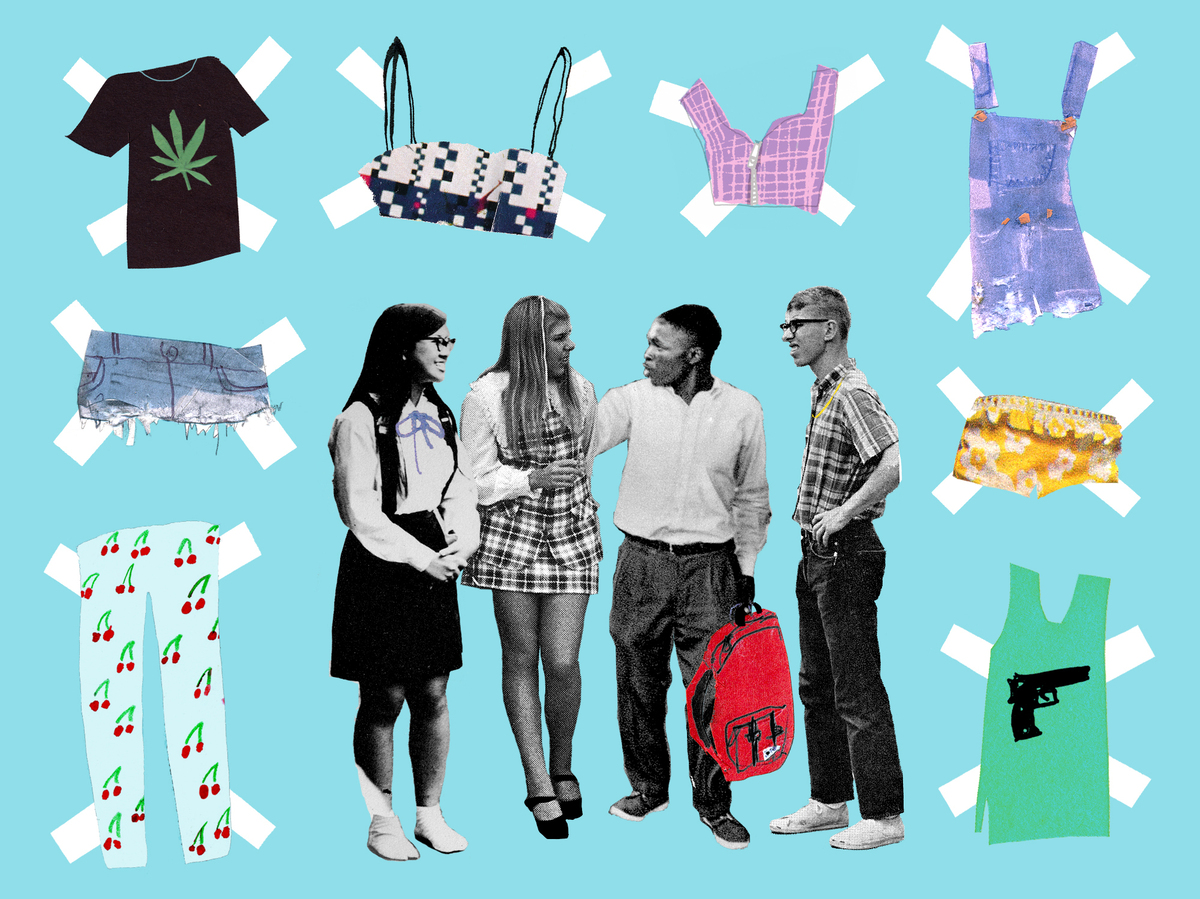 For principals and administrators, spring means a welcome end to snow days and delayed start times. But as the flowers and trees emerge from their winter slumber, so too do short pants, T-shirts, flip-flops and the inevitable battles over what kids can and can't wear to school.

It might as well be called "dress code" season.

Look no further than Quebec for the latest example: Administrators there last month ruled that an 11th-grader's shorts were too short. The student, Lindsey Stocker, then made up posters and placed them around the school in protest. She ended up with a one-day suspension.

A Texas high school last month suspended more than 150 students in a single day. The dress code at Duncanville High School bans hats and hoods inside buildings, requires skirts to be hemmed at the bend of the knee and prohibits "sagging" pants, according to The Dallas Morning News.

And the Internet lit up recently with reports that a Utah high school digitally altered yearbook photos, adding in higher sleeves and necklines to the photos of female students deemed to have showed too much skin.

Many school dress codes also govern hair, grooming and body modifications: In March, a Colorado third-grader who shaved her head to support a friend undergoing cancer treatment violated her school's dress code and was out of school for one day, according to The Los Angeles Times.

School administrators say that its one of the most vexing parts of their jobs, and often puts them in the very difficult position of balancing free expression with the goals of learning.

"It is about that freedom of expression," says G.A. Buie, the principal of Eudora High School in Eudora, Kan. "They want to be individuals; they want to put themselves out there to be noticed. But at the same time, sometimes that can be a disruption to the school. That's where the fine line comes in there."

This year, Buie says, shorts were the big issue in Eudora, a city of 6,100 located east of Lawrence. And there, sometimes there are two issues: one of compliance, and one of good taste.

"Sometimes as an adult, you get almost embarrassed for the kids. That's where some of the challenges come in," he says. For example, "those shorts look OK on this person, but maybe that's not appropriate on someone else."

"They want to be individuals; they want to put themselves out there to be noticed. But at the same time, sometimes that can be a disruption to the school. That's where the fine line comes in there."

So clearly there are as many opinions on what's "appropriate" as there are threads hanging from those forbidden cutoffs.

And each school or district has to wrestle with this problem. But, we wondered, are there common ... threads?

Almost half the public schools in the country now have a dress code (or require students to wear uniforms) according to a survey by Lands' End and the National Association of Elementary School Principals. And that number, the survey found, has increased from 21 percent in 2000.

But there's no repository or database for all of them or what they say.

So we did an informal examination of dress codes at public, co-ed schools in each of the 50 states. Most, we found, offer broad guidelines as to what can be worn on school property. From there, though, districts leave most decisions about what crosses the line and what doesn't up to individual administrators and teachers.

And, of course, therein lies the rub. A hemline that's too short for Principal A may look perfectly fine to Principal B.

Here's what most dress codes seem to have in common:

Beyond these common themes, a few policies caught our eye.

At Ashland High School in Ashland, Colo., for example, headbands aren't allowed. Coveralls and jumpsuits are off limits at North Cobbs High School in Kennesaw, Ga.

And don't think about writing down a reminder on the back of your hand at Central High School in Camp Point, Ill. That school forbids "body drawings with ink, marker," according to its dress code.

If you're wondering whether dress code policies disproportionately govern what female students can — or can't — wear to school, you're right. Our informal survey showed that regulations are more restrictive for women than for men.

And many of the protests surrounding dress codes center on the question of whether they disproportionately target girls and women. In Quebec, the fliers Lindsey Stockton posted around her school were inspired by an online image that read: "Don't humiliate her because she is wearing shorts. It's hot outside. Instead of shaming girls for their bodies, teach boys that girls are not sexual objects."

Prom season is another touch point and one where gender also plays a big role.

Some high schools have gone so far as to create detailed slideshows to show students what's acceptable and what's not on the big night. And most focus on prom dresses. According to a slideshow from Vanguard High School in Ocala, Fla., bare midriffs, "ballerina dresses," side cutouts and low-cut backs are all prohibited. So are dresses with sheer overlays, "deep cleavage" and sheer netting that shows skin.

So what about the guys? The only mention they get in this slideshow is that if they bring an "off campus date and they are not in compliance, they can be turned away." Nothing about their clothes.

A district spokesman, Kevin Christian, explained via email that "as for male vs. female dress codes, the general understanding (I think you'll agree) is there are fewer options for males, therefore fewer opportunities to wear something inappropriate and/or unacceptable."

Near Houston, the Spring Independent School District does have some rules for male promgoers: no hats, no canes, no athletic shoes and no work boots. "Tuxedos and suits with a dress shirt, pants and tie are allowed," the regulations for this year's prom read. And for female students? A lengthy list of rules ticks off restrictions on dress length, neckline, back line, torsos and slits.

Schools are finding there is no easy answer.

Last year, students at a Batesville, Miss., high school protested after a senior who was born male but identified as female was allowed to wear women's clothing. According to local news reports, students felt their classmate was being given preferential treatment and breaking the school's dress code, which requires students to conform to gender.

The National Center for Transgender Equality and the Gay, Lesbian & Straight Education Network have compiled what they say is a model policy for districts relating to transgender and gender nonconforming students.

"Students shall have the right to dress in accordance with their gender identity, within the constraints of the dress codes adopted by the school," their policy reads. "School staff shall not enforce a school's dress code more strictly against transgender and gender nonconforming students than other students."