Accessibility links
From Calif. Teachers, More Nuanced Views On Tenure : NPR Ed Some teachers say they want to preserve tenure, but add that it's time for a look at the rules. 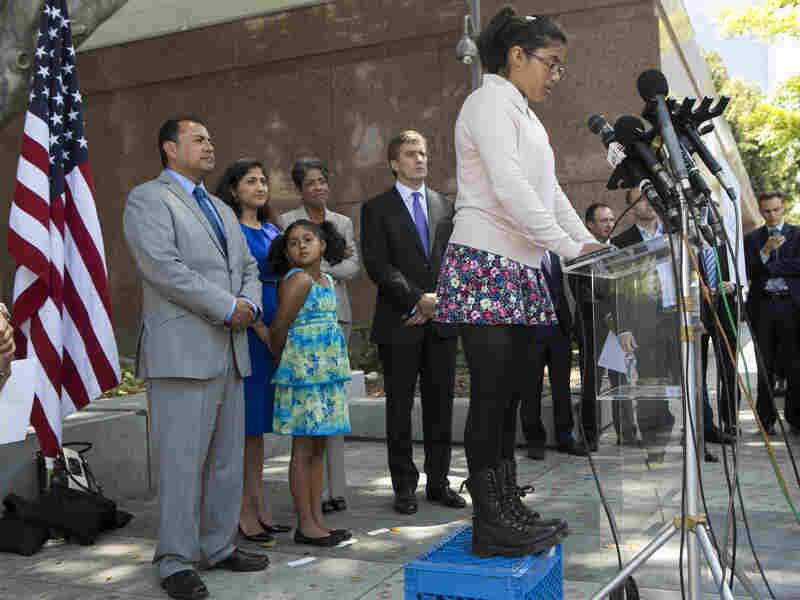 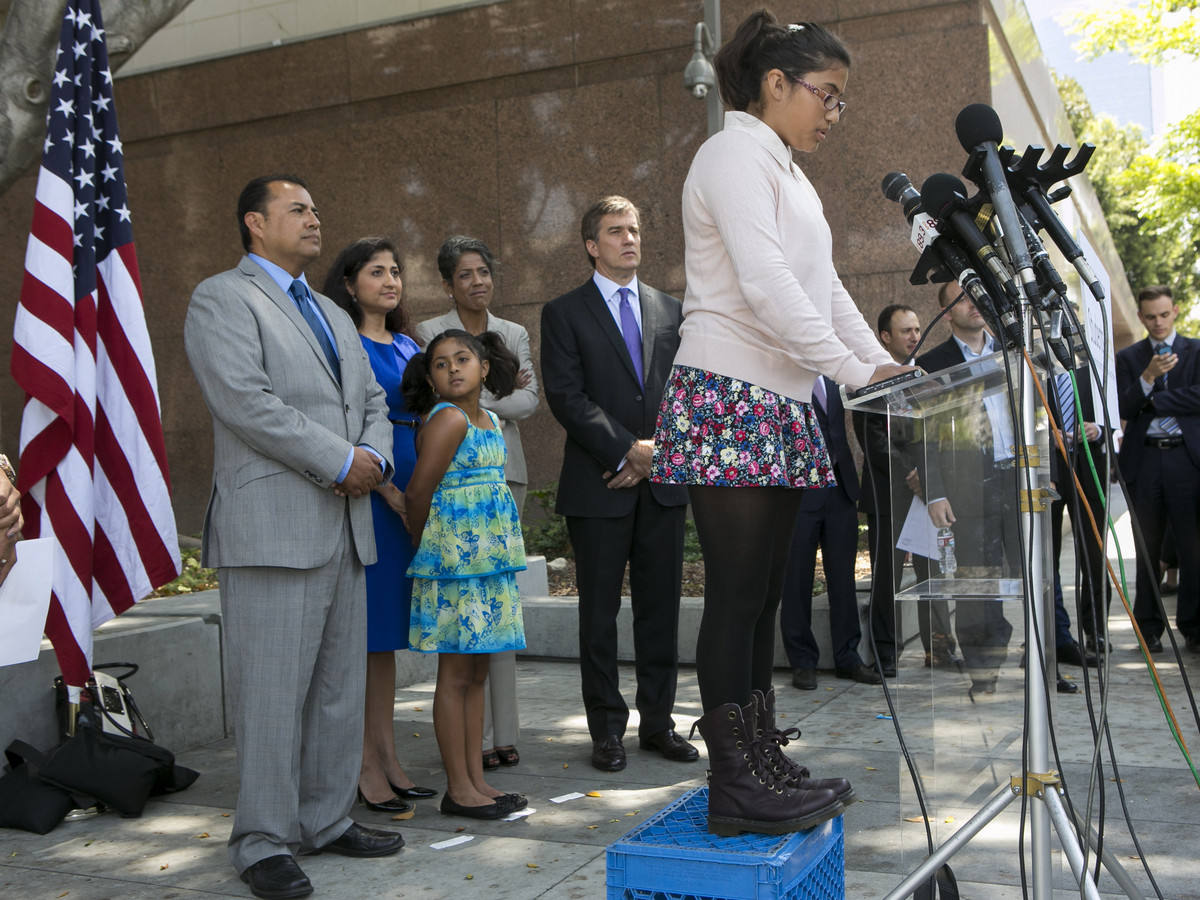 In the weeks since a California judge overturned the state's rules governing teacher tenure, the political noise has only grown louder. Advocates on both sides of the issues have largely stuck to "give-no-ground," press-release rhetoric that risks drowning out educators in the middle.

I've spoken with educators around the state since the ruling, including many who say they want protections but also real change.

In his June decision, Superior Court Judge Rolf Treu ruled that state rules undermine students' "fundamental right to equality of education" and disproportionately impact low-income and minority students. Among the rules he cited were those giving teachers tenure after two years, and that require newest teachers to be laid off first during cutbacks.

The impact on students of grossly ineffective teachers and current tenure rules "shocks the conscience," the judge concluded.

(Unions have vowed to appeal. The judge has stayed the decision pending appeals.)

The advocacy group that brought the Vergara case on behalf of California students has called the ruling a game-changer and says it could be a template for similar court battles in other states. And the teachers unions have denounced the ruling and its offspring as the biggest attack on teachers' rights in decades.

The lawsuits, union advocates charge, are a back-door attempt to privatize public schools. The California Teachers Association, the CTA, recently called on U.S. Education Secretary Arne Duncan to resign over his Vergara comments, including a blog post in which Duncan praised the plaintiffs for standing up to a "broken status quo." The NEA, the nation's largest teachers union, on July 4 also called for Duncan to step down.

But the view from many California teachers and administrators is more nuanced.

"Everybody has a sense of who's a solid teacher and who's not," says magnet school English teacher Alan Warhaftig, a 25-year veteran of the Los Angeles Unified School District. "I mean, I don't think it's a big secret."

Warhaftig, who spoke with NPR member station KPCC, is very clear: He wants tenure protections for teachers — especially against dismissals that could be political or capricious. What if a veteran teacher, he asks, is targeted for layoffs to meet a principal's bottom line? "If job stability were removed from the equation, I don't know that someone like me would have gotten into the profession for the long run," he says.

But Warhaftig says problems with tenure and dismissal need to be addressed. He says the state panel that reviews dismissals — which includes union representatives — overturns way too many firings. So some administrators, he says, have simply thrown in the towel on trying to get rid of really bad teachers.

They get shuffled around, as the Vergara plaintiffs alleged in what's known as "the dance of the lemons."

"Working with a bad teacher is an embarrassment," Warhaftig says. "You feel bad that somebody's in a job they're not suited for. You feel bad for their students."

Maggie Pulley teaches at an online public charter school in California. She says she's currently helping to unionize teachers there.

Like Warhaftig, Pulley says teachers need protections. But she testified in the Vergara trial for the plaintiffs. She left a comfortable, tenure-protected job at another California school in frustration, she says, after seeing really bad teachers go untouched.

She told me one teacher was regularly drunk and hungover in class. Another, she says, was verbally abusive to her students. Beyond those extreme cases, she says, she was frustrated by educators with tenure who were simply really bad at their jobs.

Another teacher, she recalls, "had misspelled words up on his wall. He wasn't showing up drunk or screaming and being abusive. But he wasn't teaching these second-graders what they needed to learn."

A bill passed the California Legislature days after the Vergara ruling that reduces the time it takes to fire abusive teachers from up to two years to seven months. But that law deals mainly with the rare cases of egregious misconduct including child abuse, sex abuse and teachers who commit certain drug crimes.

"One of the greatest shames over my career, 25 years, is that the teachers union hasn't been leading the charge to create meaningful evaluations," Warhaftig says.

And test scores — a pillar of the assessment structure — are deeply imperfect. "When you look at my test scores through the years, they're very high. But I mostly teach kids in honors English, so they should be very high," he says. "Somebody who's really a hero might be the person whose scores might be a lot lower, but they have a lot of kids who are more challenged academically."

Before the Vergara ruling, some districts — teachers and management — were talking about extending the time-to-tenure rules and about how to further streamline due process for dismissing bad teachers. They were also talking, at least in some places, about positive interventions for struggling teachers: to support those who need to improve and counsel others out of the profession.

"My hope is that the Vergara decision hasn't polarized those conversations ... turned it into an 'us against them' situation and having to stake out the most far-fringed position," says professor Bill Koski. He teaches at Stanford University's law school and graduate school of education. He hopes the ruling doesn't stifle efforts underway in some cities exploring creative approaches to tenure and teacher evaluation, including adding more robust peer and student reviews.

"I do hope this is an opportunity to start a dialogue outside the courtroom in part because teacher policy and employment protections, how to get high-quality teachers into hard-to-staff classrooms and, importantly, how to close the teacher-quality gap — these are extremely complicated questions. It's going to take some really complex policy thinking and some conversations at the local level as well as the state level," Koski says.

For Branch, this all comes down to leadership. He says more administrators need to speak truth to mediocrity in the classroom.

"I'm not gonna get into a fight about whether I should be getting more teachers more tenure faster or slower," he says. "We've got kids who need help now. So if I'm noticing that you are not doing your job, then I'm gonna call that regardless of how long you've been there, and how long you're doing that job."

Dennis Van Roekel is the head of the National Education Association, the nation's largest teachers union. He hopes the Vergara decision does prompt a wider conversation about tenure. Perhaps, he says, California should look at extending the time it takes to get tenure.

"But, again, it should be a joint conversation," Van Roekel says. "There ought to be a rational discussion to come up with a system that makes sure that no one is in the classroom who shouldn't be there."