Accessibility links
Should Kids Get A Trophy For Showing Up? : NPR Ed NPR Ed takes on the question that has long divided parents and experts alike. 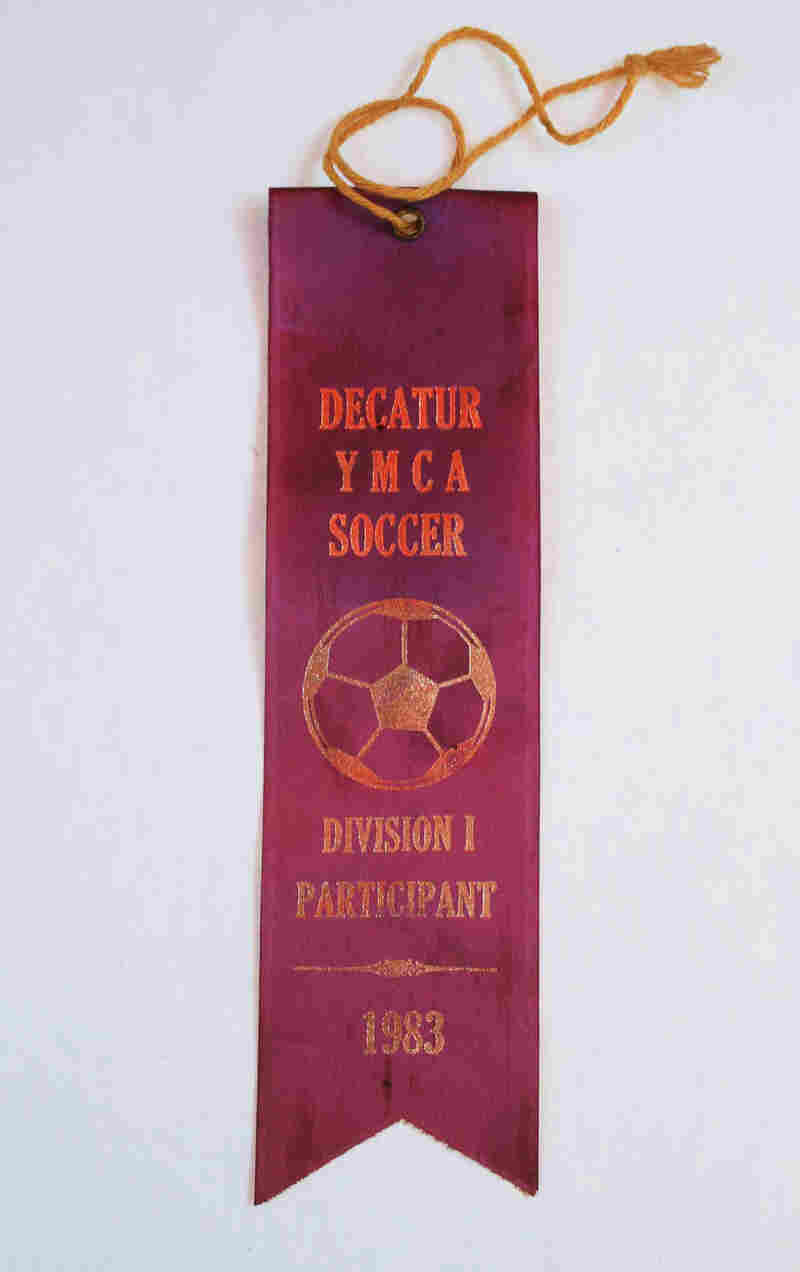 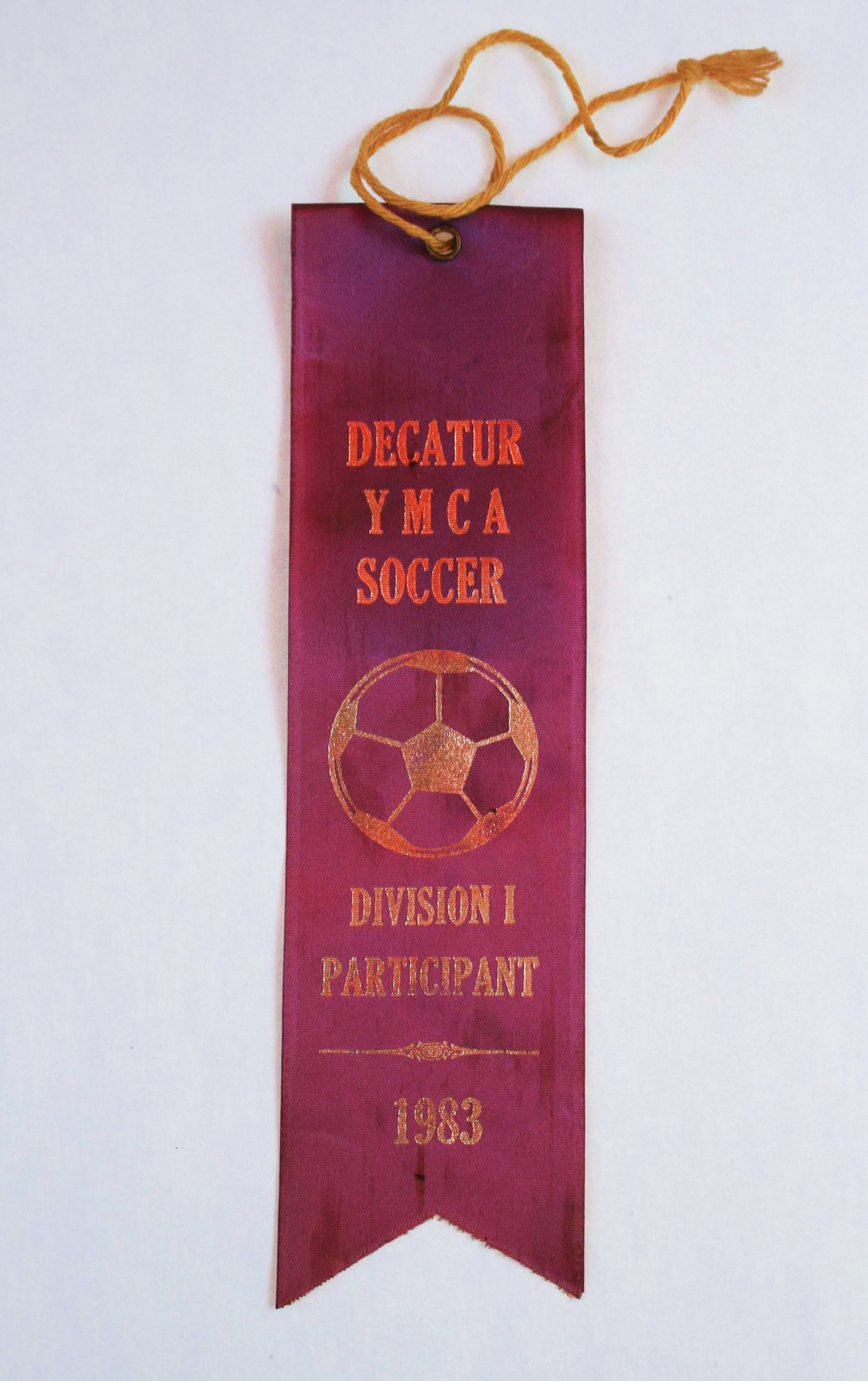 Likely this reporter's very first award for participation, found squirreled in a box in his parents' basement.

Talk about a spirited debate ...

Just Google the question, "Should kids get trophies for participation?", and the first page yields headlines like "Losing Is Good For You" and "Hell YES all the little league kids should get trophies!"

I remember collecting a shelf full of participation trophies from years of playing YMCA soccer. Did they make me who I am ... or spoil me rotten?

"No," says Stanford psychology professor Carol Dweck. Kids should not be given trophies simply for participating, she says. Dweck explains her answer with an anecdote from a mother she'd recently spoken to.

"Her daughter rarely showed up for her soccer team. She had a terrible attitude," Dweck says. In spite of that, "at the end she got a giant trophy and would have been devastated had she not."

Dweck concedes a child shouldn't have to be the best player on the field to get a trophy, but it should reward something, like improvement or team spirit.

Next up: Susan Harter, a professor of developmental psychology at the University of Denver.

"What do I think about that? I think it's a little bit excessive," Harter says, leaning toward No. Instead of a firm No, though, she re-frames my question:

At what time of [a child's] life do we want to bring home the cruel reality that somebody's better than somebody else?

"At what time of [a child's] life do we want to bring home the cruel reality that somebody's better than somebody else?"

I got a lot of questions-as-answers to my unanswerable question. Like this one from Tovah Klein, author of the book, How Toddlers Thrive:

"You know, I'm always thinking about, 'What is that debate really about?' Do you really care if everybody gets a trophy?"

Klein says kids should play because they enjoy playing. She argues, play should be intrinsically rewarding and that "[kids] don't need an adult saying, 'You get a trophy because you played well today.' "

So far, the score is roughly 3-0. Is there no one out there willing to argue on behalf of the humble participation trophy?

Kenneth Barish, a clinical associate professor of psychology at Weill Cornell Medical College, isn't afraid to say it: He thinks kids should get trophies for participation. "This is a minority view now," he says with a laugh, admitting that he's had to defend the idea even within his own family.

Barish says he sees no harm in adults encouraging participation with a trophy and that he's found no evidence the practice leads to entitlement among kids.

"It may be all they get," says Jorge Perez, vice president of youth development and social responsibility for the YMCA, another Yes vote. The Y has made a habit of giving participation trophies, he explains, "because we want to anchor the experience."

A few years back, Perez says, several young men visited him with YMCA baseball trophies they'd received as kids. And these weren't fancy, first place trophies. They were "tiny," given simply for participating. But the men had kept them and clearly valued them. Perez argues these trophies act as an important marker, to say 'I did this, I finished this.' "

"That's why those kids hold onto those trophies," Perez says. "That's why Mom doesn't throw them away."

And that's when it occurred to me: I don't know what happened to my shelf-full of participation trophies. If they'd been important to me or my mom — markers, as Perez says — I would presumably know where they are.

"I went down in the basement," my mother tells me after I call and ask if she knows what happened to the trophies. "I was appalled at the number of boxes that have your name on them. And none of them said 'Trophies.' "

She insists I threw the awards away years ago — because they didn't mean anything to me. But then she surprises me by telling me she did find one ... not a trophy at all.

"A dark, plum-colored ribbon with gold print on it that says 'Decatur YMCA Soccer, Participant, 1983.' "

I would have been 7 years old, and this is likely my very first award for participation. I have no idea how it survived for three decades — whether I saved it or my mother scooped it out of the dust bin years ago — but it did, this fragile little ribbon. And so I'm inclined to make that another Yes vote in the participation debate.