Accessibility links
Putting Power Tools In The Hands Of 5-Year-Olds : NPR Ed To move kids away from computer screens, a new wave of learning programs is emphasizing hands-on activities. Like building stuff. 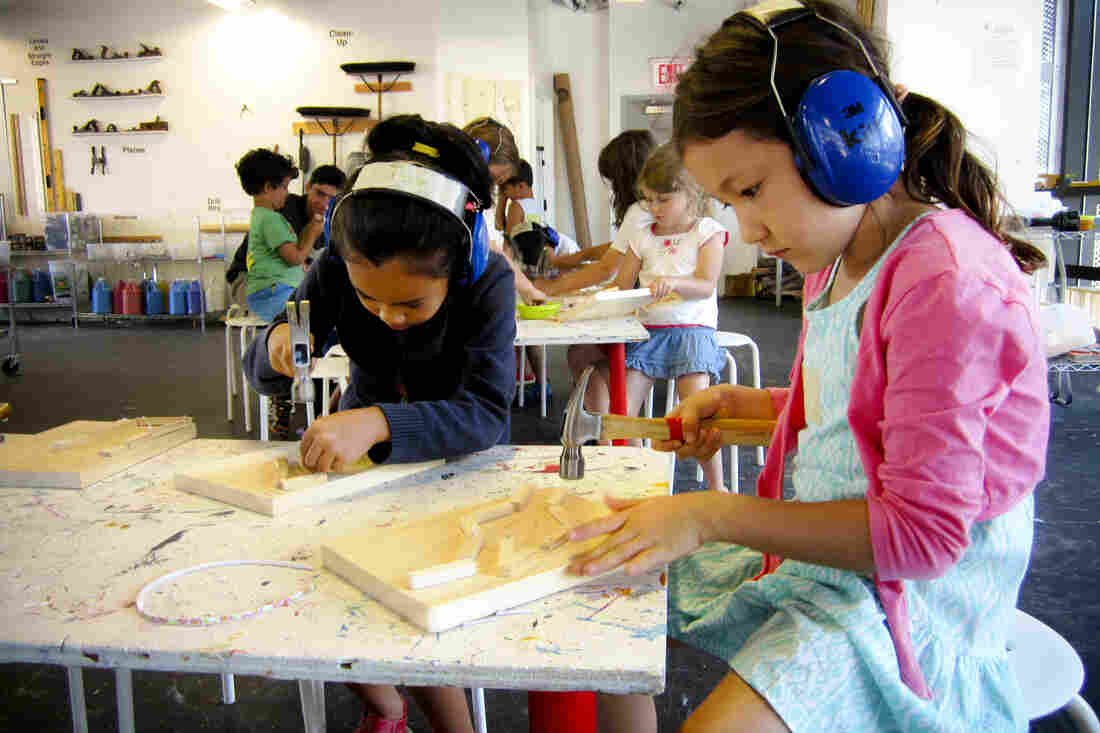 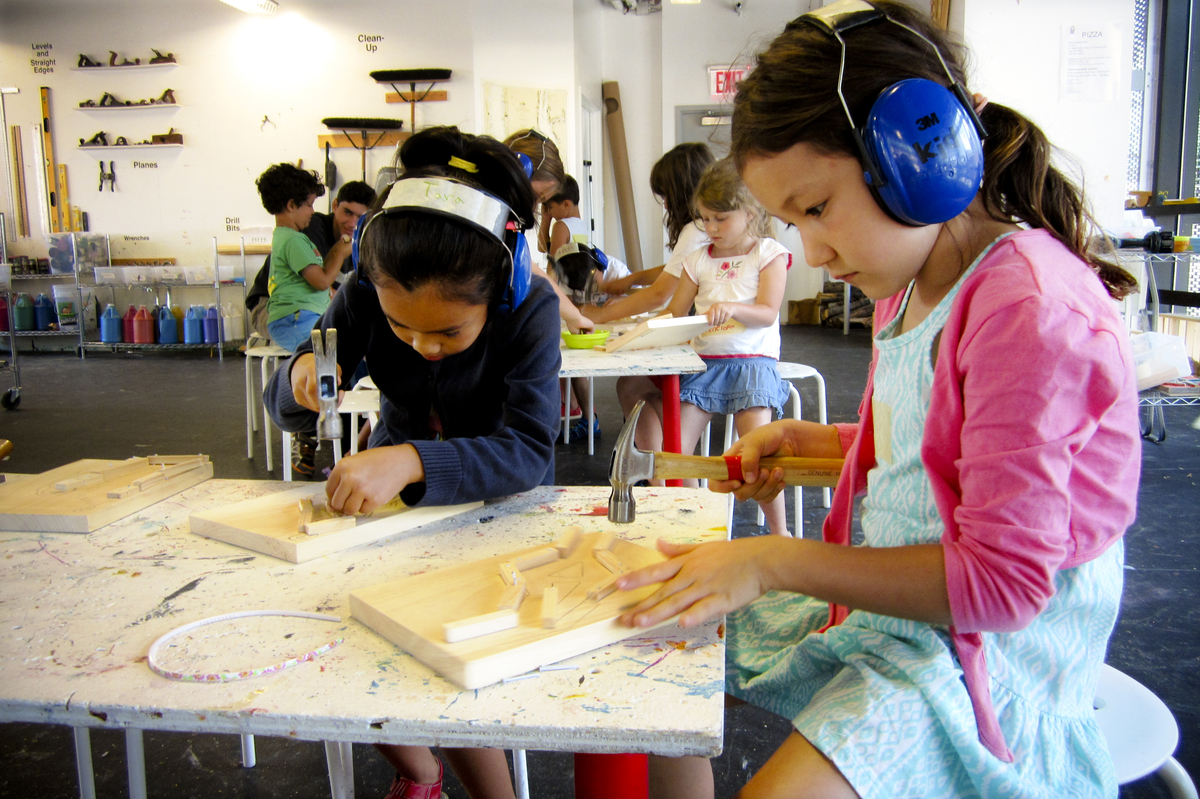 The Construction Kids program in Brooklyn offers hands-on workshops throughout the year.

Seven-year-old Penelope Day needs both hands to pick up the power drill.

"Go ahead, turn it on," says Deb Winsor, who's working with Penelope on this project. "You might want to make it go faster."

As she does, Penelope feels the rush of air from the motor. "The wind is blowing right on you," she says. "You can feel the vibration of the drill bit going in."

Penelope is spending the week at a day camp run by Construction Kids. The Brooklyn-based program offers building classes throughout the year for kids as young as 2 years old. It's one of a new and immensely popular wave of programs trying to shift kids away from computer screens toward actual, hands-on activities. Like building things from scratch.

With help from a team of adults, the children in this program will design and make their own game boards, foosball tables and models of cities. Even the Brooklyn Bridge.

Winsor began Construction Kids five years ago. She's a woodworker who came up with the idea after giving a lesson on building to her 4-year-old son's pre-K class. 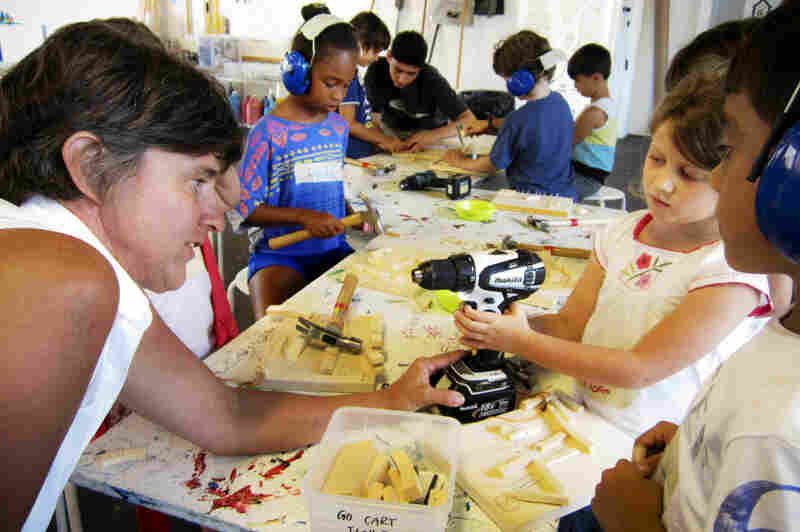 Deb Winsor, the founder of Construction Kids, works on projects with some of the students, including 7-year-old Penelope Day. Beth Fertig/WNYC hide caption 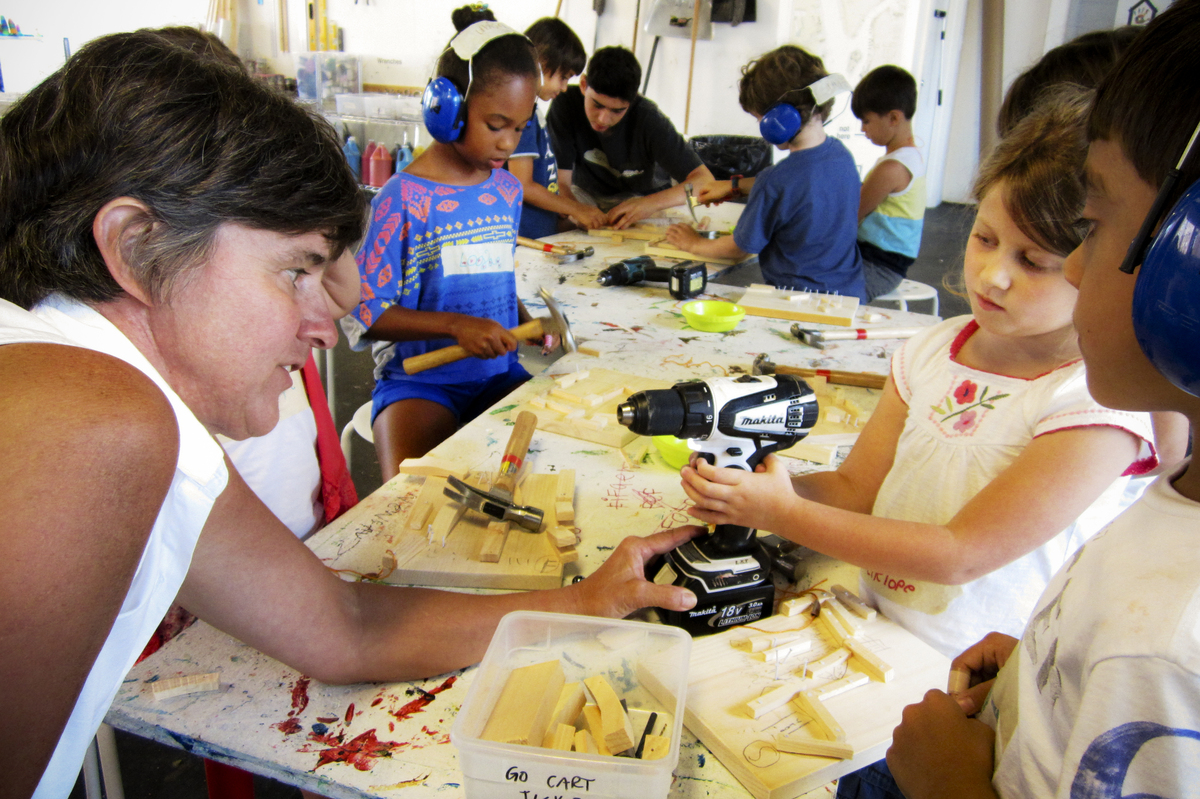 Deb Winsor, the founder of Construction Kids, works on projects with some of the students, including 7-year-old Penelope Day.

Last year alone, she says, 12,000 kids signed up. Winsor thinks these programs offer an antidote to all the time kids spend on their screens.

"There's just an incredible demand on the part of parents to have their kids do this kind of learning," she says. "The schools can't do it for a lot of reasons. It's expensive; they don't have the insurance that covers it. It's a big step to train your teachers."

Not to mention the fear of putting power tools in the hands of 5-year-olds. Winsor says her biggest obstacle was finding an insurance company. But she says her staffers keep a very watchful eye and there haven't been any serious injuries.

"Sometimes we have splinters. Every now and then someone will, you know, hit their finger," she says.

Winsor says the program is so popular she's creating a nonprofit foundation to serve more public schools that can't otherwise afford it.

Educators say building is an important way for kids to learn by doing — just look at the enduring popularity of blocks and Lego.

What Can Kids Learn By Doing Dangerous Things?

"I think it's extremely important to build with your hands and really embrace craft," Bogner says. "And feel like you can build things and construct what's in your mind, rather than trying to search for it on the computer."

At Construction Kids, there's a lot of excitement about the first big project of the week. It's a gigantic marble run, 18 feet of wooden ramps leading to a maze made out of nails. But the staff members have to hold up the planks to keep it working.

Seven-year-old Max Rhodes thinks he has a solution.

"We need to build stilts all the way down to the ground," Max says. "But if we work all together, this might take, at least three days, not the whole week."

For a lot of parents, that's a good use of time.