Accessibility links
Playgrounds For All Children: Here's How To Find One : NPR Ed For kids with disabilities, a simple activity like going down a slide can be a challenge. An NPR crowdsourcing project maps inclusive playgrounds — fun and safe for all — across the country.

Playgrounds For All Children: Here's How To Find One

Playgrounds For All Children: Here's How To Find One 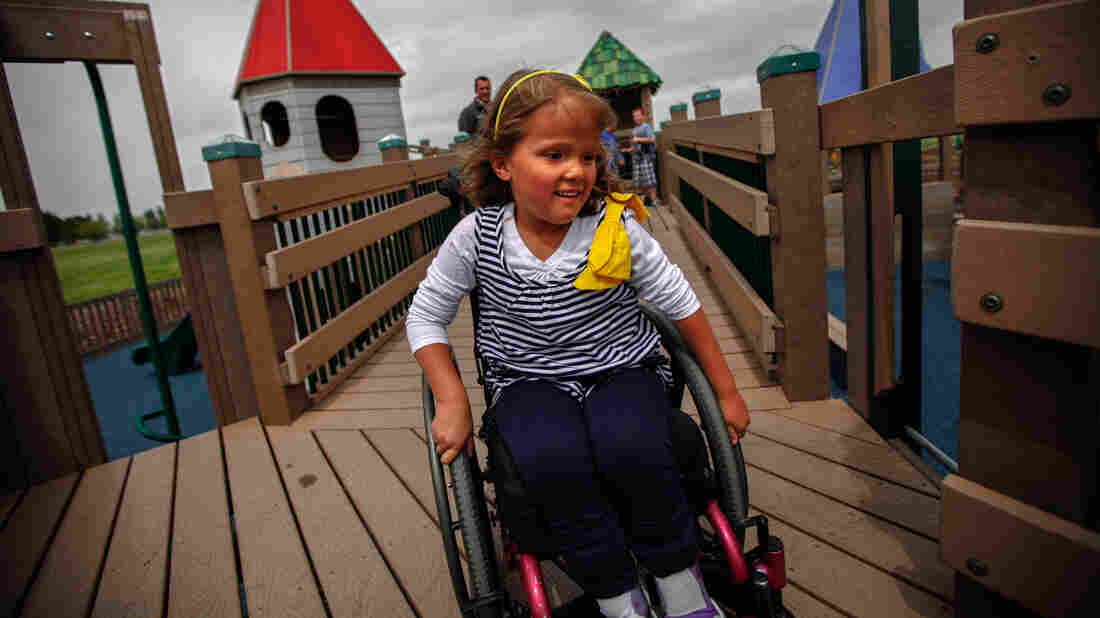 Brooklyn Fisher rolls down the ramp on the playground named for her in Pocatello, Idaho. The playground was built using accessible features so children of all abilities could play alongside each other. John W. Poole/NPR hide caption 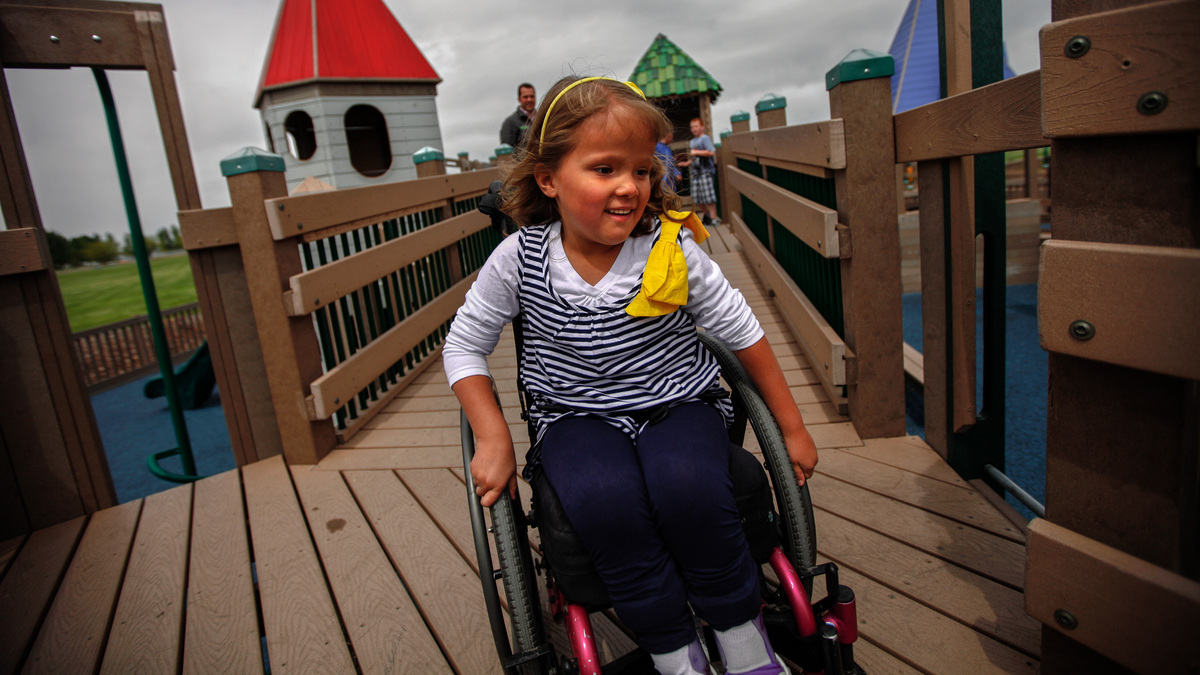 Brooklyn Fisher rolls down the ramp on the playground named for her in Pocatello, Idaho. The playground was built using accessible features so children of all abilities could play alongside each other.

Janna Espinoza's daughter Coraline has hearing loss, cerebral palsy, epilepsy and developmental delays. Nearly 2 years old, she can't sit up, stand, creep or use her hands as a typically developing child does.

Coraline is among an estimated 6.4 million children in the U.S. with a disability. And for these kids the simple ritual of playing outside can get very complicated.

"My daughter can't do very much at a typical playground, except watch her older sister play," says Espinoza. "Playgrounds are a depressing place for us."

On a typical playground, danger lurks just about everywhere.

"The infant bucket swings are not safe," explains Espinoza. "She can't go down the slide. She can't play in the sand unless she is on her stomach."

Finding a place to play is a big challenge for children like these, and their parents. Sometimes, they must create one.

Espinoza's community worked for a year to raise money for Tatum's Garden, a playground in Salinas, Calif., designed for everyone to enjoy.

Find Accessible Playgrounds Near You

It's one of 2505 playgrounds in 48 states and DC and 996 cities listed in our Playgrounds for Everyone app. NPR has spent the last year crowdsourcing the list. (These totals do not include more than 400 City of Chicago playgrounds that were just submitted, which we are in the process of adding.)

Outdoor time, motion and social interaction are crucial for development in all children, according to Angela Hanscom. She's a pediatric occupational therapist who runs an outdoor camp in New Hampshire, using nature as both prevention and treatment for sensory development issues.

"Movement and play are important for both atypical and typical children," she says.

For example, take the simple act of moving your head off the vertical axis, by hanging upside down, spinning or swinging. This kind of action helps develop what is called the vestibular system. That means it's giving the little hair cells inside our inner ear important input, helping us develop awareness of our own midline and shape. This, in turn, is crucial for walking or even for balance when sitting.

"The vestibular system helps support all your other senses," says Hanscom. "If you don't have a good idea of where your body is in space, you aren't safe."

Research suggests active play can be helpful for children diagnosed with ADD, anxiety, autism, or other emotional or sensory issues. Spinning and experiencing centrifugal force, Hanscom says, affects the limbic system, and can be very calming. She says kids who display repetitive motions like rocking or fidgeting may be seeking vestibular input that is otherwise missing.

Unfortunately, children with challenges may get less outdoor playtime than others, for safety, social or other reasons. A widely cited 1991 research article suggested that physically disabled kids could be thought of as experiencing a secondary disability arising from "play deprivation."

In recent years, awareness has been growing of the need for "inclusive" or "accessible" playgrounds, such as those tracked by the NPR app.

There are lots of design innovations: Broad, flat ramps that can accommodate wheelchairs or walkers to get to the top of play structures. Sand tables at wheelchair height. Large swings with back rests and straps for kids who don't sit unassisted. "Cozy spots" for children who need time out from all the distraction and noise.

At Tatum's Garden, says Espinoza, "My youngest daughter is able to swing on the accessible swings for the first time. She can army crawl herself through a tunnel in the toddler section. There are many features throughout that she can try to twist or turn, watching balls drop, or cogs spin. Her big sister gets to play at an amazing playground, and I get to let our youngest explore in her own way."

An earlier version of this story understated the number of playgrounds in NPR's Playgrounds for Everyone app.