Accessibility links
The NPR Ed Mailbag: Alternative Teacher Certification : NPR Ed Our readers had strong feelings, pro and con, on the many ways for teachers to enter the profession. 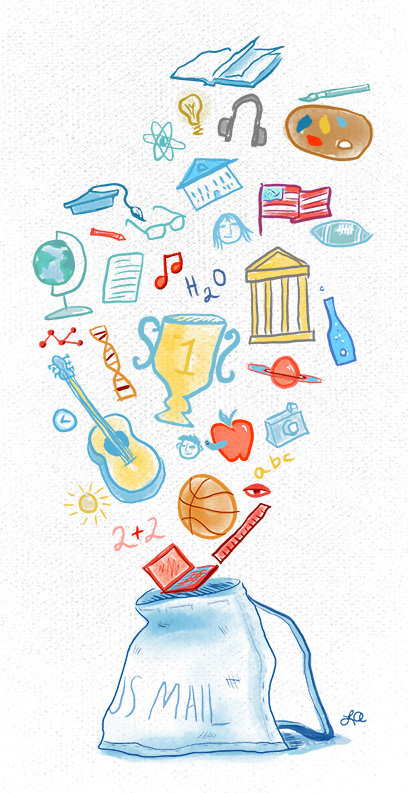 Last week I reported about Indiana's newest teaching license. Called a "career specialist" license, it allows anyone with a B.A., a B average, and three years of related work experience to become a middle or high school teacher just by passing a content test.

Overall, 1 in 5 teachers now enters the profession through nontraditional means — meaning other than by studying education in a four-year or master's program.

This story definitely got people talking. Opinion was narrowly divided, although almost everyone agreed with the last quote in the post — that traditional teacher preparation has its problems.

One commenter, "Public Doormat," felt that alternative preparation sets the bar too low. And he or she spoke from experience.

"We are moving in the wrong direction! RAISE the requirements for teaching; don't lower them! Teaching is a DOUBLE professional occupation — you need both content and pedagogical expertise. Teacher education needs to be MORE rigorous, not less, in order to professionalize this occupation.

"I did a one-year licensing program. It was not enough. I knew the content better than the teachers I worked around, but all the teacher tricks, the organizational skills, the resources, the behavior-management tricks, etc.? I could have used far more expertise in those areas."

While many alternative programs, including Indiana's, focus on bringing people with content expertise into the classroom, some readers felt that this was misguided.

"There is so much more to teaching than content," wrote Wendy Dotan.

"First-year teachers need guidance and support from other effective educators. They need practical strategies to reach a variety of students. They need organization skills to put systems in place to maximize the allotted time for learning and for applying the knowledge gained. Oh, and let's not forget they also need to be able to teach digital citizenship and how to engage in civil dialogue so that they may take civic action to engage with their communities to bring about positive change. I say a 'sprinkling' of pedagogical theory along with literacy strategies is quite enough for the classroom teacher in the trenches."

Lynn Howard agreed, "as a former student, a former university teacher, and a former trainer of Teaching Assistants, I have found that content mastery doesn't necessarily confer an ability to teach."

In Favor Of Options

Those who spoke in favor of alternative certification noted that not all programs should be tarred with the same brush. One teacher, Chazz Robinson, defended the quality of his own alt-cert prep program.

I get why, when written like this, it seems pretty black and white. HOWEVER, we also forget to note that: many tchrs feel trad @npr_ed

"As you say, there are strong and weak programs. I too earned teaching certification through an alternative program. It was run by the large urban district I work in and a local college. The coursework included standard educational curricula but geared toward our ultimate environment — an urban classroom. My classmates and I came into the program with the requisite content knowledge, gaining the pedagogical knowledge through it. As for the 'selectiveness,' I recall ~100 people during the interview day for a cohort of 15."

didn't prep them well either, and they learned on the job. + lots of folks (esp POC) are drawn to idea of immed earning exp/$$ in @npr_ed

Perhaps surprisingly, a couple of self-identified traditionally certified teachers spoke out in favor of more paths to the profession. April Campagnoli Barlett said, "I am a teacher with a degree in education and think alternative routes to the classroom can benefit students. High quality instruction is (basically) a balance of knowing cool stuff and sharing that stuff with enthusiasm and joy." She added that after 11 years in the classroom, experience counts a lot more than what she learned back in college.

field they already had interest in. If we want to ensure more tchrs go to prep prog, those prog need to support better practices @npr_ed

"Jim D," also a teacher with an education degree, said, "We need as many good, knowledgeable teachers as we can get."

What Does The Research Say?

My original post cited one 2005 research study, on the impact of alternatively certified teachers in the classroom, and a review of programs by the National Council on Teacher Quality, which gave many alt-cert programs low marks.

There are other studies on the topic, as commenters pointed out. One linked to a study in 2014 by Tim Sass at Georgia State University, which also contains a detailed review of previous research. The preponderance of evidence shows that, on the one hand, making it easier to enter teaching can attract higher achievers into the profession, which in turn has a positive impact on student performance. The greatest positive effects come in middle and high school math classes.

@biblio_phile Tx CT! :) @npr_ed ~ final graf pretty much sums up my take. Traditional teacher prep programs nothing to crow about either...

On the other hand, teachers certified through nontraditional means have higher turnover, which is too bad because teachers tend to get better over time. Also, program design matters a lot: In Sass' study, students prepared at blended programs housed at community colleges did worse than traditional teachers, while those who went through a rigorous route called ABCTE (certified by the American Board for Certification of Teacher Excellence) did much better.

An important dimension to the conversation surfaced on Twitter (see sidebar), involving alternative certification and diversity in the teacher workforce.

Christina Torres, an English teacher in Hawaii who is a Teach for America alum, pointed out in a series of tweets that some people who could be valuable to the profession can't necessarily afford years of education; they need to work right away.

Her comments were echoed by Melinda D. Anderson, an education writer, and Jose Vilson, a teacher and author of the book This Is Not a Test.

Thanks to all of you for your diversity of opinions and willingness to keep the conversation going!