Accessibility links
These People Can Make Student Loans Disappear : NPR Ed A group called Rolling Jubilee has "abolished" more than $3 million in private student loans from the for-profit Corinthian Colleges. And it's just getting started. 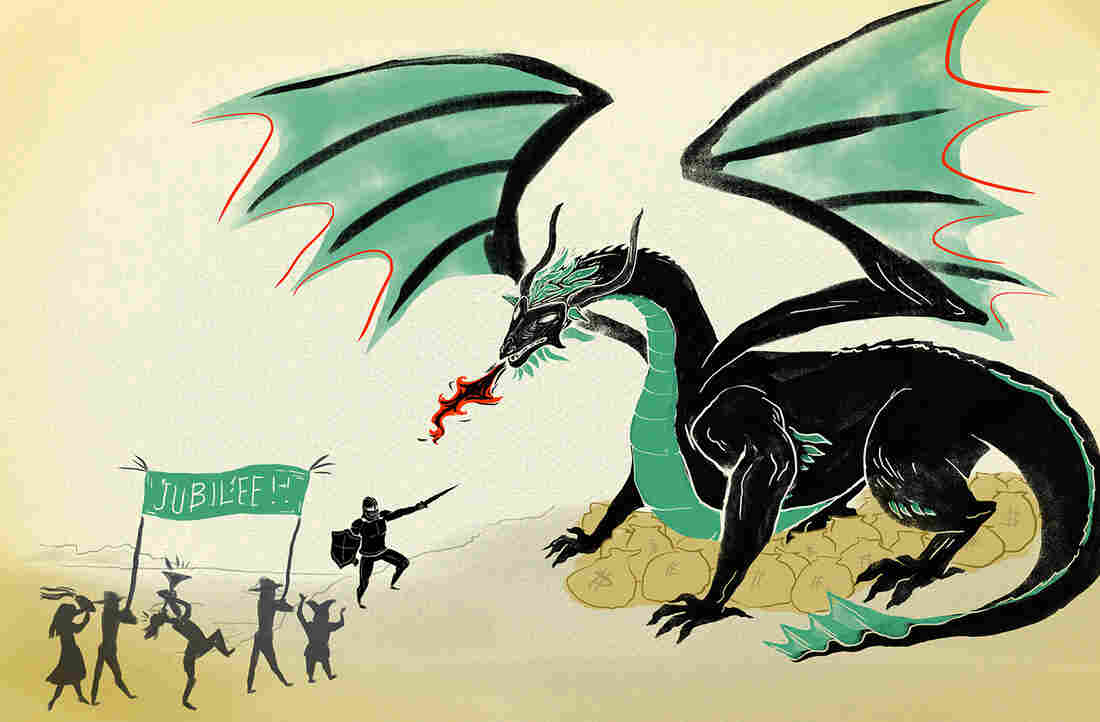 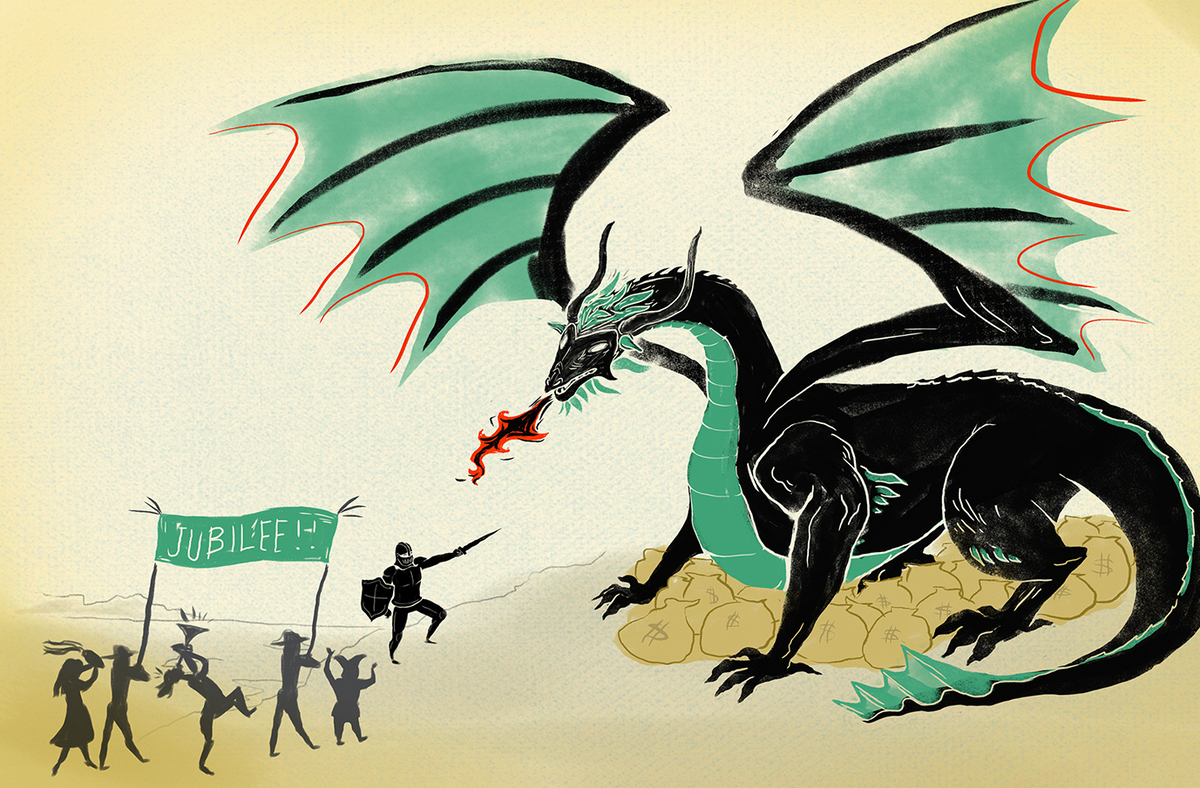 It was an ordinary Friday. Courtney Brown, 24, of Kalamazoo, Mich., was busy looking for a job. "I've applied all kinds of places," she says. "Wal-Mart, Target, Verizon Wireless."

Then she got a strange letter in the mail. " 'We are writing you with good news,' " she reads to me over the phone. " 'We got rid of some of your Everest College debt. ... No one should be forced to mortgage their future for an education.' "

The letter went on to say that her private student loan from a for-profit college, in the amount of $790.05, had just been forgiven outright by something called the Rolling Jubilee.

Since November 2012, Rolling Jubilee has purchased and eradicated about $15 million worth of debt arising from unpaid medical bills. Today, the group announced that it has erased $3.9 million in private student loans, including Courtney Brown's and those of almost 3,000 other students of the for-profit Everest College.

Rolling Jubilee is a project of a group of economic activists called Strike Debt, which formed out of the Occupy Wall Street movement. The group timed today's announcement for the third anniversary of that protest. The word "jubilee" refers to a time decreed in the Bible, every 49th year, when all debts were ritually forgiven, and slaves and prisoners freed.

"Some debts are just, and others are unjust," Thomas Gokey, one of Strike Debt's organizers, says, explaining the group's stance. "Providing affordable, publicly financed, world-class education is a moral debt we are failing to pay."

Rolling Jubilee's tactic takes advantage of a peculiar characteristic of modern debt. When people stop paying, debts become delinquent. The original owner, say a bank, eventually writes the debts off and sells them off at bargain-basement prices to third-party collectors.

Rolling Jubilee has managed to step in instead and buy some of this secondary market debt, using donations raised online — in this case, buying student loan debt for less than 3 cents on the dollar. But instead of trying to collect this debt, the group makes it disappear.

More than 40 million Americans now have some form of student loan debt, totaling an estimated $1.2 trillion. The amount erased by Rolling Jubilee, and the number of students helped, will not make a practical dent in that sum. "It doesn't solve the problem," says Gokey.

Instead, what he and the group's members are trying to do is draw attention to the plight of millions of people with unpaid student loans, especially high-interest private loans from relatively expensive for-profit colleges.

"They're the worst of the worst," says Gokey. The next step, he says, is to organize large numbers of people to press for policy changes that would allow debtors to be released from obligations they can't meet. Currently, student loans are nondischargeable in bankruptcy under most circumstances.

When Brown first got the letter from the Rolling Jubilee, it sounded like "a scam" — too good to be true. "I was in shock," she recalls. But after speaking to Gokey, "it made me feel better."

Brown says she had nearly completed a one-year program to become a dental assistant when Everest College assigned her to an internship in Battle Creek, Mich., about a 30-minute drive from her home.

"I had no transportation to Battle Creek. I asked them to find me a program closer, but with that type of internship you have to go out and find your own. And I didn't have those kinds of connections." As a result, she had to drop out of the program and, unemployed, found herself unable to pay her loans.

The for-profit college industry as a whole has come under increased scrutiny for its disproportionate contributions to the $1.2 trillion in student loan debt. While enrolling about 13 percent of students, who tend to be first-generation working adults, for-profits are responsible for a little under half of student-loan defaulters.

Corinthian was already facing severe financial trouble when the Department of Education placed a hold on financial-aid payments to the company over the summer, because of a failure to satisfy some requests for information.

Corinthian Colleges has some 200 lawsuits pending against it for allegedly fraudulent practices. This includes a case brought by the California attorney general for violations of consumer protection and securities laws.

Yesterday, the Consumer Finance Protection Bureau announced yet another lawsuit against the company, this time for alleged predatory lending. The federal agency seeks relief for borrowers, saying the company misled students about job prospects, pressured them to take out high-interest private loans, and then used aggressive debt-collection tactics.

Company officials have defended their practices.

"Students who continue to study at our schools do so because there is clear, independent evidence that they receive a quality education," Kent Jenkins Jr., a Corinthian spokesman, told NPR Ed. He forwarded the company's official response to the California allegations, which said the complaint "paints a misleading and inaccurate picture of our schools."

Everest College and the other Corinthian colleges aren't officially shutting down. In fact, Everest is still recruiting and enrolling students as it searches for a buyer for its campuses. The decision of the Department of Education to allow most of the campuses to keep operating under new management also means borrowers, not the government or lenders, are still on the hook for those loans.

But not the lucky ones, like Brown. The weekly calls from debt collectors will stop. And, she says, she will soon be able to continue her job search without worrying that a hiring manager will see a ding on her credit report.

"I feel better knowing that it's off," she says. "I feel like I can do something better with myself."