Accessibility links
A $15 Million Space Race For Education : NPR Ed The Global Learning XPRIZE is announced this week. It poses a challenging question: With the right technology, can children teach themselves?

A $15 Million Space Race For Education

A $15 Million Space Race For Education 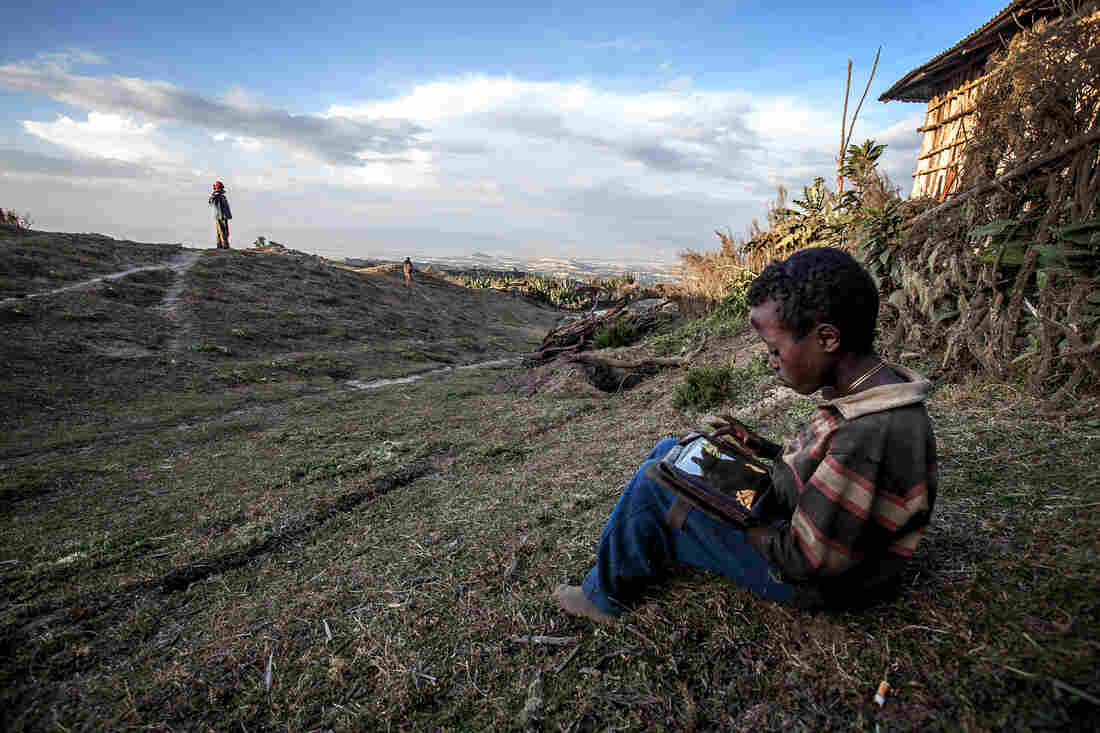 A boy plays with a solar-powered computer tablet on Mount Wenchi, Mirab Shewa zone of the Oromia region of Ethiopia. Courtesy of Tim Freccia/Xprize hide caption 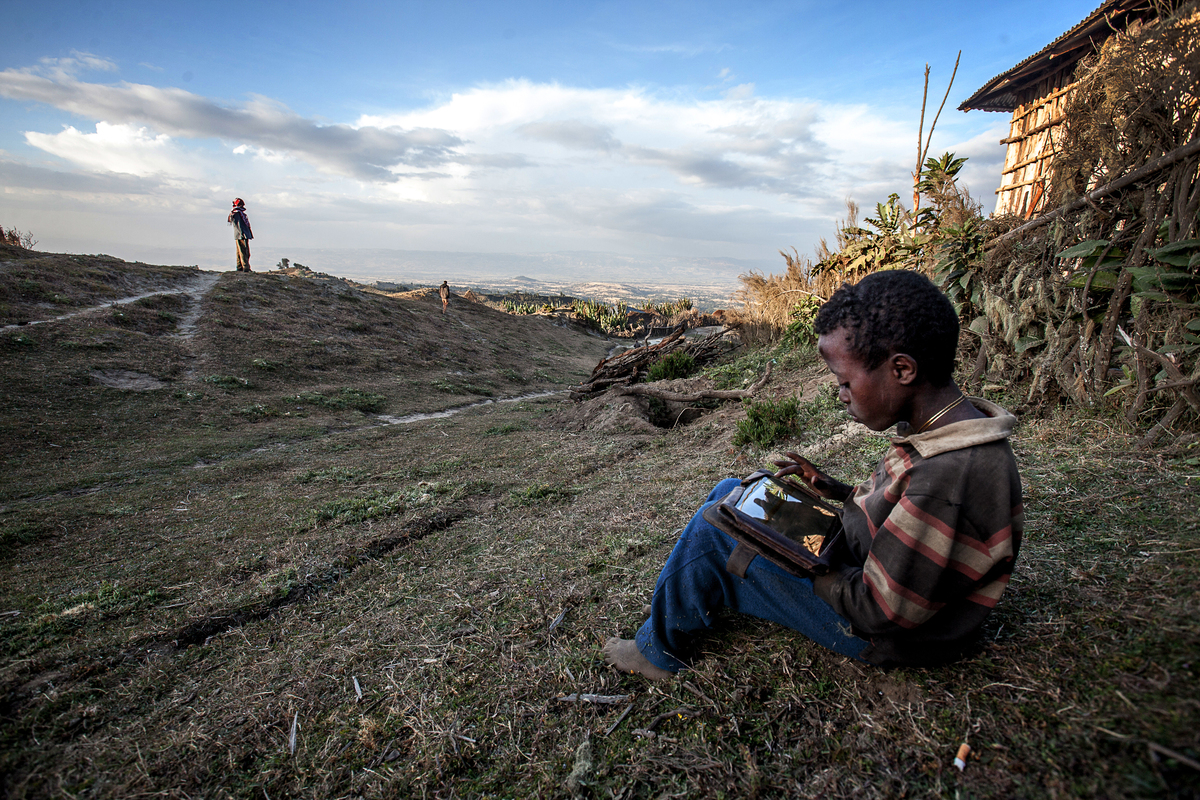 A boy plays with a solar-powered computer tablet on Mount Wenchi, Mirab Shewa zone of the Oromia region of Ethiopia.

A rural tribe is living peacefully in the Kalahari desert, free of contact with the modern world. One day, a Coke bottle drops from the sky, falling from a passing airplane.

The villagers find many uses for this unfamiliar new technology: a fire starter, a musical instrument, a stamp for printing on cloth. But because of its very uniqueness, they start to fight over it, and one of the villagers decides that to preserve harmony, it's best to return this "gift" to the gods.

The Gods Must Be Crazy, a South African comedy, was a global smash hit in the early 1980s. It's only in the past decade, though, that its plot — or at least, the setup — has been adapted as a playbook for transforming education.

The idea: Some previously unknown technology could, all by itself, catalyze a revolution in children's learning, especially in the developing world.

You're looking at a model that has arguably failed many, many, many kids. We're not in the business of looking back.

The latest incarnation of this idea was announced this week. The $15 million Global Learning XPRIZE is being billed as the largest-ever technology competition in the private sector, to "revolutionize global education."

The winning team of the Global Learning XPRIZE, organizers say, will "develop a free, open-source and scalable software solution in 18 months that can enable children to teach themselves basic reading, writing and arithmetic." The software, says the challenge's director, Matt Keller, will be designed to be deployed on very low cost Android tablet computers.

Keller explains that the idea emerged from his previous work with the One Laptop Per Child project. Announced in 2005 by Nicholas Negroponte of the MIT Media Lab, One Laptop Per Child has distributed over 2.4 million of its specially designed "XO" laptops and tablets around the world.

While the majority of these have gone to school systems, Negroponte and Keller ran a side experiment called The Reading Project, where solar-powered computers with literacy apps were distributed directly to children in remote areas of Ethiopia. The children were given no instruction in how to use them.

The initial experimental sites chosen were villages with no schools, no libraries, no printed material, even without road signs. "We tested the supposition that kids could teach each other how to read," Keller says. "The theory was, if you had the right kind of application and design for self-learning, you could conceivably see a breakthrough."

Maryanne Wolf, a professor of child development at Tufts University, has been researching the outcomes of the project, now called the Global Literacy Project, with sites in Uganda and the rural American South. She says that while the children haven't learned to read, they have learned the English alphabet from the tablets alone. "Our data serves as a kind of germinating first round of evidence that this approach can really help many children," she says.

The Global Learning XPRIZE grows from this seed. According to the press release for the XPRIZE, it aims to prove "that through technology a child can learn autonomously."

Keller says this is important because an estimated 250 million children around the world lack basic literacy, and 58 million are not in school. Schools are overcrowded and teachers are undertrained.

"I did a lot of work in Afghanistan," he says. "Teachers there are often just one grade more educated than the kids, and sometimes they're not literate at all."

But why not just spend the money to train teachers or build schools?

"Even just to get the kids that are out of school into school, you need to train 3 million more teachers and build 1.1 million more schools, which is going to take a really long time," Keller says. "You can say you're looking at a model that has arguably failed many, many, many kids. We're not in the business of looking back."

He says the time is ripe to gamble on new approaches.

Payal Arora is not so sure. A media and communication professor at the Erasmus School of History, Culture and Communication in the Netherlands, she has studied a similar attempt at technologically driven self-learning, the Hole in the Wall project in India.

Started by Sugata Mitra, Hole in the Wall simply places computers with an Internet connection in locations where they will be accessible by children. Mitra's concept of "minimally invasive education" won the 2013 TED Prize, given to a "visionary leader" with a "high-impact wish for the world."

Most of the positive research on Hole in the Wall comes from Mitra himself and his collaborators. There are reports of children acquiring basic computer literacy and researching topics like genetics.

Arora says the Global X Prize, like Hole in the Wall and One Laptop Per Child, represent not an evidence-based approach but an ideology: the belief that "Human resources are so deeply flawed that investments in technological resources will be much more effective."

But in reality, she argues, "learning is never 100 percent self-directed. Of course we want children to be agents of their own learning, but no one in their right mind would say let's get rid of human input, from parents, schools, or communities."

Arora says that before we continue to sway resources toward a quick technological fix, she'd like to see "substantive evidence that self-directed learning autonomous from human mediators can be a stand-alone tool."

Keller says his prize, if it works as designed, will generate exactly that evidence.

Unlike previous XPRIZE challenges, the final phase will be a controlled trial. Applications developed by the five finalist teams will be distributed to a few thousand children in West Africa, and the program deemed most effective at raising the kids' basic literacy and math scores from a baseline will be called the winner.

"We don't know if this is going to work," he says. "But if it does, it's transformative, and why not try?"