Accessibility links
A Collection Of Clues To America's Educational Past : NPR Ed Tucked away in boxes, deep in the collection of the Smithsonian's National Museum of American History, are objects that tell the history of American education.

A Collection Of Clues To America's Educational Past

A Collection Of Clues To America's Educational Past

The Allen Company alphabet board dates back to 1840. Elissa Nadworny/NPR hide caption

The Allen Company alphabet board dates back to 1840.

If you walk past Daniel Radcliffe's Harry Potter robe, ride the elevator up four floors, above the ruby slippers from The Wizard of Oz and a family of four visiting from Cincinnati, Ohio, you'll find yourself in a long hallway that vaguely resembles a hospital walkway.

The fourth floor of the Smithsonian's National Museum of American History is an assortment of offices and storage rooms. 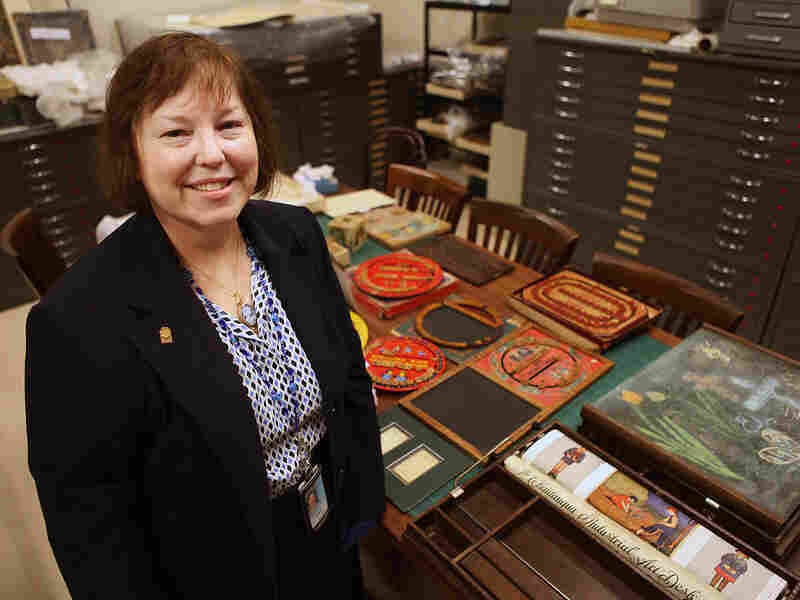 Debbie Schaefer-Jacobs is the curator of the education collection at the Smithsonian's National Museum of American History. Elissa Nadworny/NPR hide caption 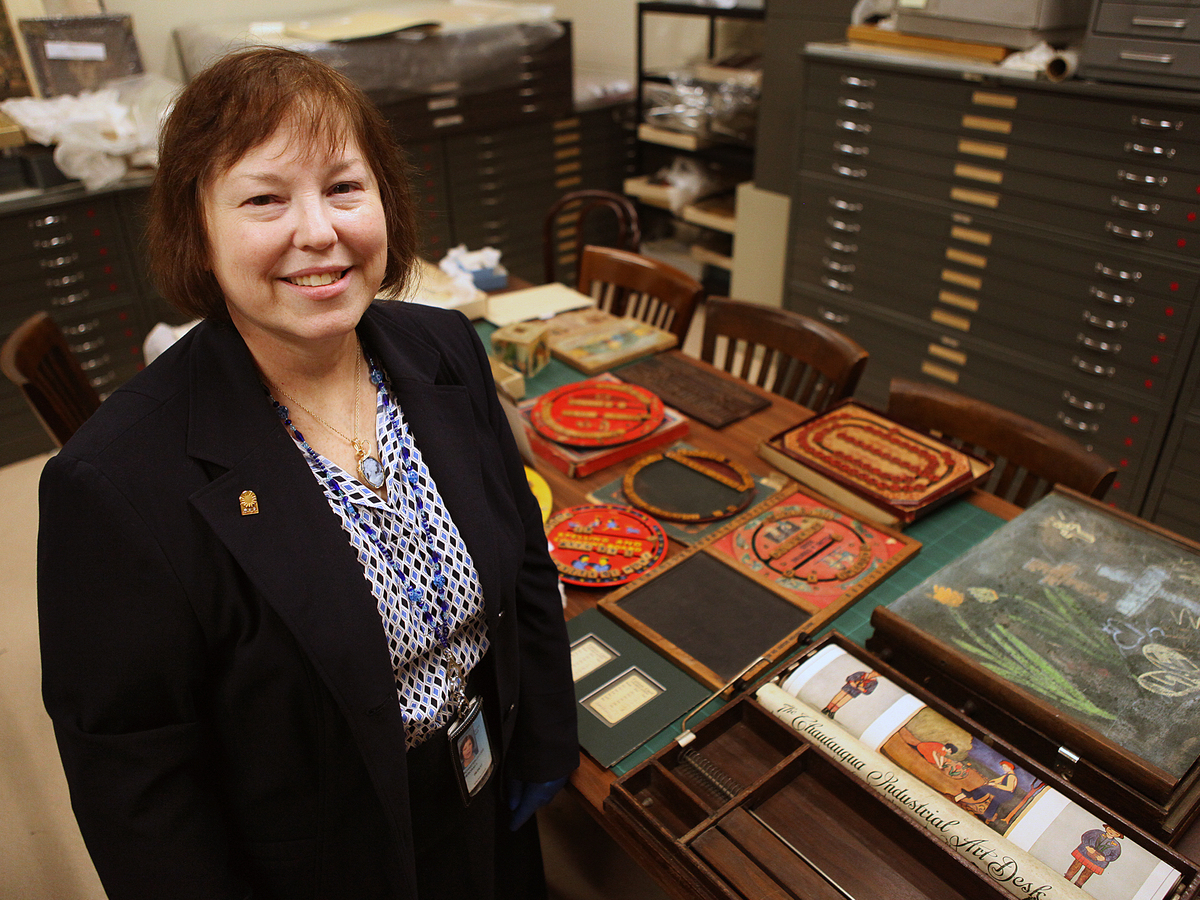 Debbie Schaefer-Jacobs is the curator of the education collection at the Smithsonian's National Museum of American History.

Debbie Schaefer-Jacobs ushers me through a heavy brown door. She's the curator for the museum's education collection, and this is one of those days that people like her relish.

In this room, below an air conditioner steadily filling the space with crisp, cold air, she's unpacking — very carefully — a newly arrived collection of items that help tell the story of America's educational history.

These artifacts are part of an 800-object gift to the museum by Richard Lodish, a former Lower School headmaster at the elite Sidwell Friends School in Washington, D.C.

The new collection spans more than two centuries — the oldest item is something called a "hornbook": a wooden paddle no larger than an adult hand, used by children in the 18th century as their first reading experience.

The 250-year-old object has a thin layer of parchment paper printed with the alphabet, covered by a translucent piece of animal horn. Once these were common in schools: other hornbooks in the collection include religious text in addition to the letters.

For some of the objects, it's as if time has stood still, the toys left exactly where a kindergartener may have put them more than a hundred years ago.

Take a box of blocks made by the Milton Bradley company. The company's founder and namesake, a New England businessman, was passionate about bringing kindergarten to the United States. 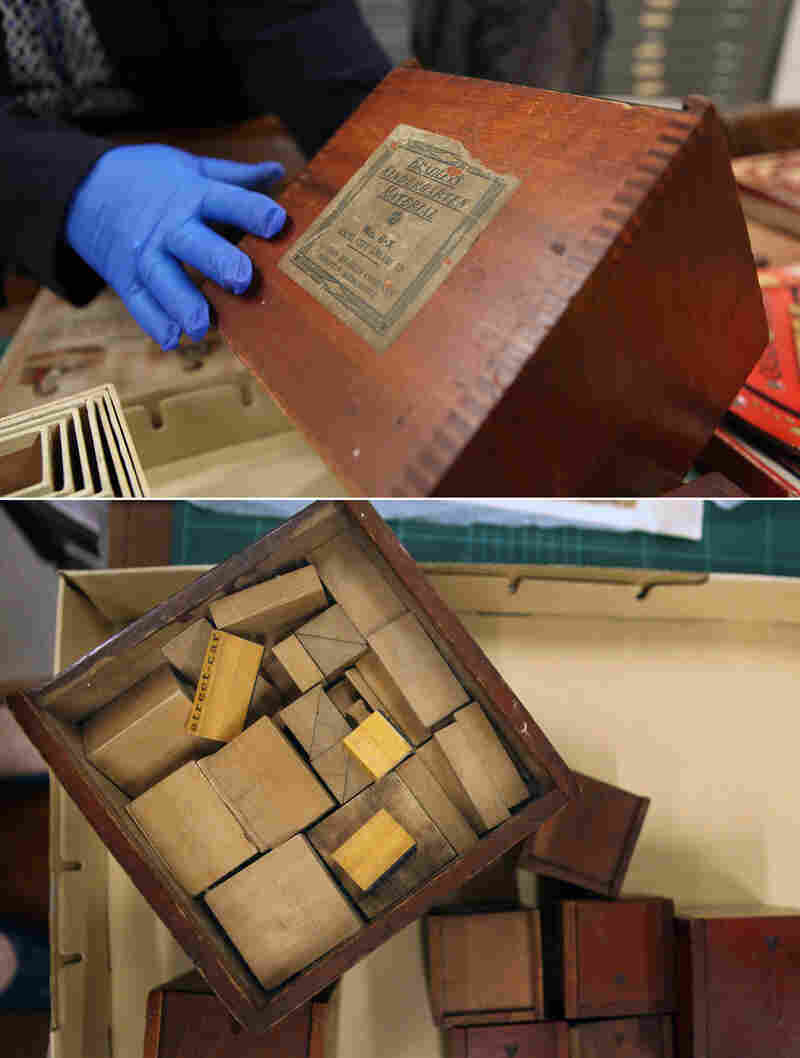 A box of blocks made by the the Milton Bradley company. Elissa Nadworny/NPR hide caption 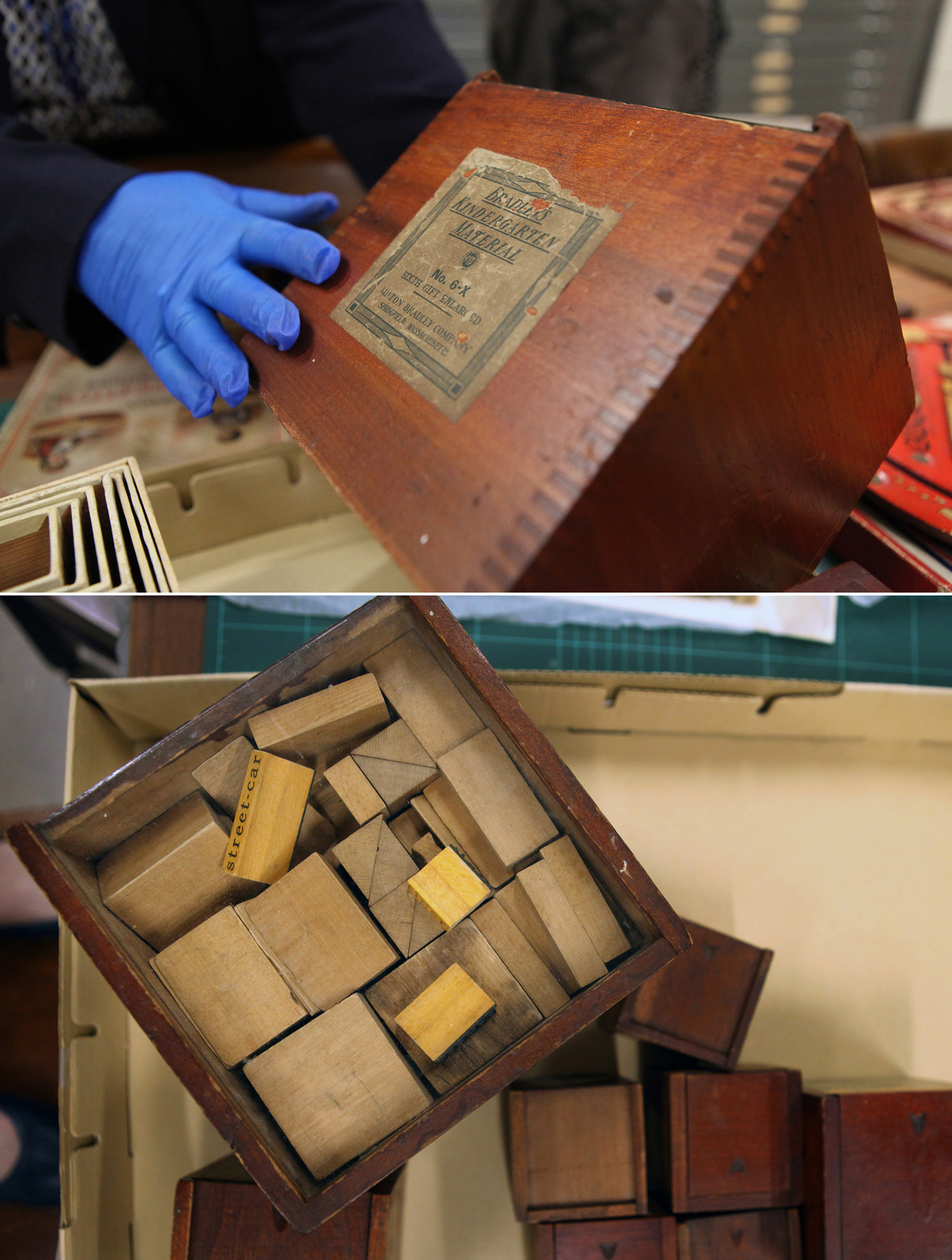 A box of blocks made by the the Milton Bradley company.

After attending a lecture by Elizabeth Peabody, a 19th century American educator and an early advocate of kindergarten and the role of play in learning, Milton Bradley branched out from the board games that made his company famous, and started a new line focused on educational materials.

"Bradley was convinced making educational toys was good for society," says Schaefer-Jacobs, "to the chagrin of his business partners."

The Milton Bradley Company sold everything you would need to run a classroom — paper cutters, desks, blackboards and their signature educational toys. The Lodish donation contains many of these items.

In the Smithsonian collection's box of multi-sized wooden blocks, there are a number of yellow stamps — not part of the Bradley set.

"It would have been common enough to have found both of these items in a classroom," says Schaefer-Jacobs. "Somehow they got mixed in. The funny thing about it is, at some point a child was cleaning up after class and neither the student nor the teacher ever thought: I'm not going to take them out again."

A century later, when the items arrived at the museum and Schaefer-Jacobs opened up the box, she discovered them just as they'd been left — a world away from that original classroom.

A History In Waiting

The objects in the collection are meticulously cared for and cataloged; some are housed here on the 4th floor at the museum and others are offsite in warehouses.

The American History museum doesn't have a specific gallery or exhibit on education, but often these artifacts are used to strengthen other exhibits. A set of bells in the collection will be used for an exhibit on patriotism in America. A "Dick and Jane" book will be on display as part of an exhibit about how the popular series of reading primers reflected American culture.

But many of these pieces will never find their moment in the spotlight on the exhibit floors. They'll remain in storage with the millions of other objects the Smithsonian owns.

But even if they don't get displayed, the curator says they provide a historical understanding of the American experience. "Often social changes play out in schools before they play out in the larger society," she says.

As examples, Schaefer-Jacobs cites issues like bilingual education, the teaching of English as a Second Language (ESL) and the conflicts in schools over classroom prayer and the separation of church and state.

"We have more than just old school materials," Schaefer-Jacobs says. "You also have materials where we can learn something about a school device."

Take the alphabet board.

An alphabet board, part of the Richard Lodish American School collection.

The Lodish donation includes a number of alphabet boards — made from wood, metal and, later in the 20th century, plastic. These educational toys have movable letters that allow children to assemble and spell words.

"It's interesting to see how the tool changed over time," says Schaefer-Jacobs pointing to a rectangular wooden alphabet board that dates to the 1840s. Others in the collection are round and colorful. Some have illustrations of boys riding bicycles and girls chasing animals; others include numbers for counting.

One circular board from the 20th century has the phrase "CATS AND LAZY DOGGIE" spelled out in the toy's center.

"That's exactly how a student left it," Schaefer-Jacobs says. And that simple remnant of life is what she loves about her job: imagining the classroom setting where these objects used to live.

The museum, part of the complex of Smithsonian facilities that sit on the edge of the National Mall in downtown Washington, is receptive to donations — Schaefer-Jacobs suggests emailing the museum with a photo of the object.

Based on the image, the curatorial staff will decide whether to accept the object. Even the Lodish collection went through such scrutiny – there were several pieces the museum didn't take.

Back on the museum's fourth floor, above the buzz of the public exhibits, Schaefer-Jacobs begins to put the objects back in their boxes. She covers the set of tuition cards for black students attending a segregated school in the Jim Crow South, and wraps up a math toy known as "Consul, the Calculating Monkey."

Over the next few months the museum will continue to receive boxes from the Lodish collection. And Debbie Schaefer-Jacobs will be there, wearing her bright blue gloves, meticulously unpacking, cleaning and cataloging each item, her hands tightening up in the cold, climate-controlled air.

She'll be inspecting each item, piecing together their stories, searching for clues to America's educational past.