Accessibility links
Pythagoras' iPhone: Is Listening A Lost Classroom Art? : NPR Ed We began our 50 Great Teachers series with a look at Socrates, which raised a question: Do educators focus enough on teaching students how to listen? 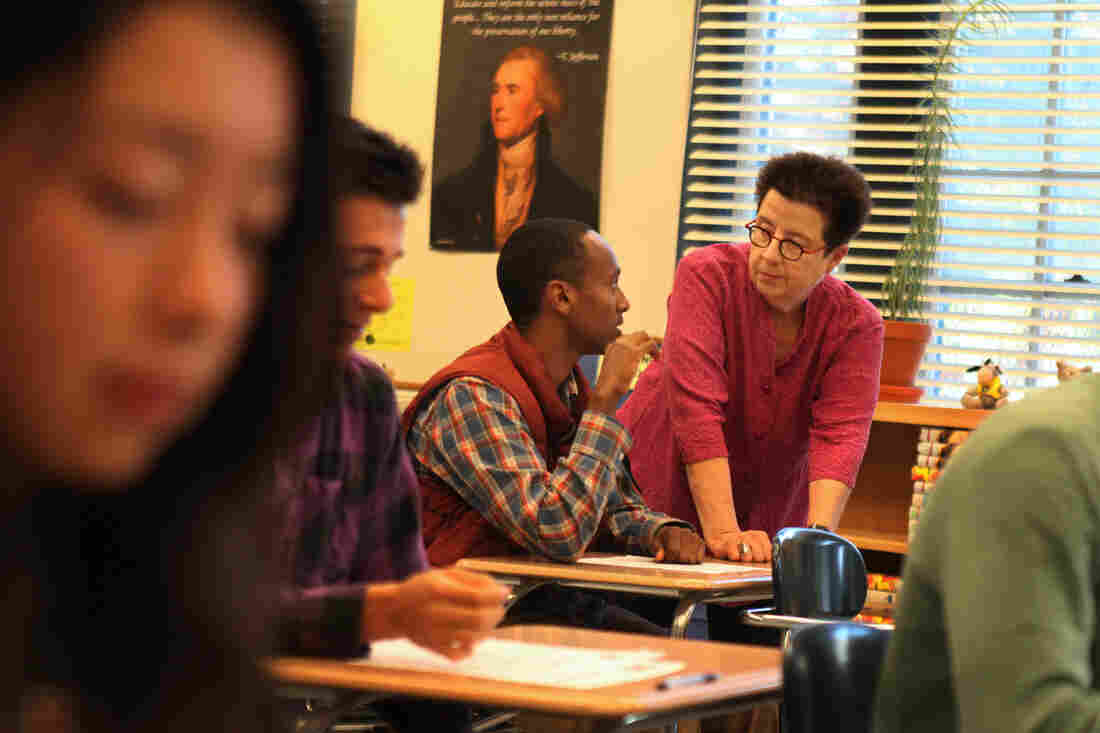 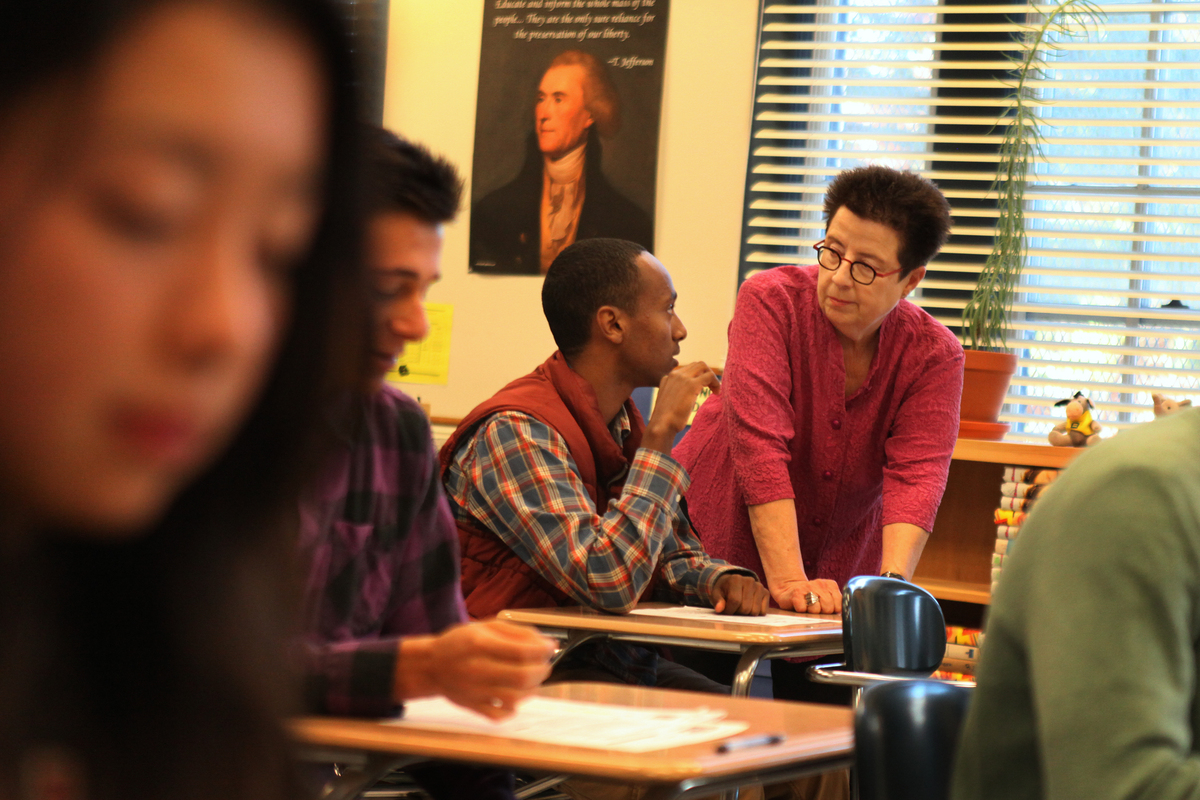 Listen and learn, the saying goes.

But are students and teachers these days fully listening to each other?

What, exactly, is good listening, and why does it matter when it comes to learning? Is "close listening" a doorway to understanding that too many of us are keeping only half-open?

My story on Socrates last week that kicked off our 50 Great Teachers project got me, and some of you, thinking about those questions.

The teachers in our story frequently reminded students how important it is to really hear each other in an open way. They consider it a vital, foundational part of Socratic-type dialogue and discussion — and learning.

A good number of the comments we got about the piece talked about the lost art of listening and its relation to learning.

"Hey, if it teaches my students to listen while others speak, I'm all for it," Len Lewis wrote in our comments section. "That basic skill is mostly lost in our society today. You can see in people's eyes that they are, if they are polite and not butting in, simply repeating in their head what they want to say to you instead of actually listening to what you are saying."

Julian Treasure works to rebuild that neglected, basic skill. He's a writer, business owner and TED lecturer. "Conscious listening is very largely overlooked in the mainstream of education. It's such an important skill in life. And yet we expect children to pick it up from home or from peers informally," Treasure told me. "It would be some sort of shock horror story if a child left school unable to read or write. But we do not teach explicitly, or test in the main, either speaking or — much more importantly — listening."

I'm not sure how you'd substantively test for listening, but it's a great point: Educators and parents are so focused on measuring reading, writing and math skills that the arts of speaking and listening often get pushed to a dusty corner of the pedagogic agenda. "Which I think is shocking," Treasure says.

Many believe there's a need for more conscious listening among teachers as well. Treasure points out that instructors are likely filtering comments through a set of pre-existing assumptions that are far more deeply ingrained than the students' assumptions. Donald Finkel made a similar point and called for moving away from the "teacher as great orator" model in his book Teaching with Your Mouth Shut.

What Would Pythagoras Do?

It is said that in ancient Greece, before Socrates, the philosopher and mathematician Pythagoras would put up a screen for his first-year students. They were not allowed to see him teach. The visual, he thought, would be a distraction from attentive listening and what he saw as the vital aural mode of teaching and learning. 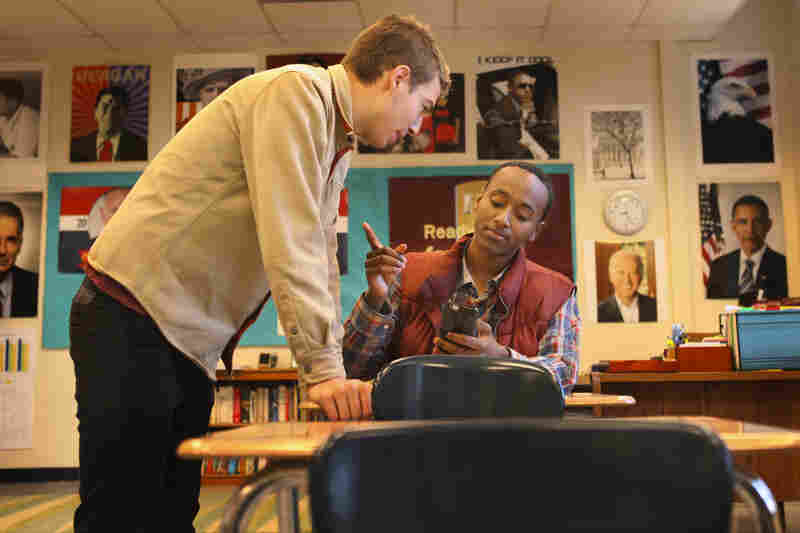 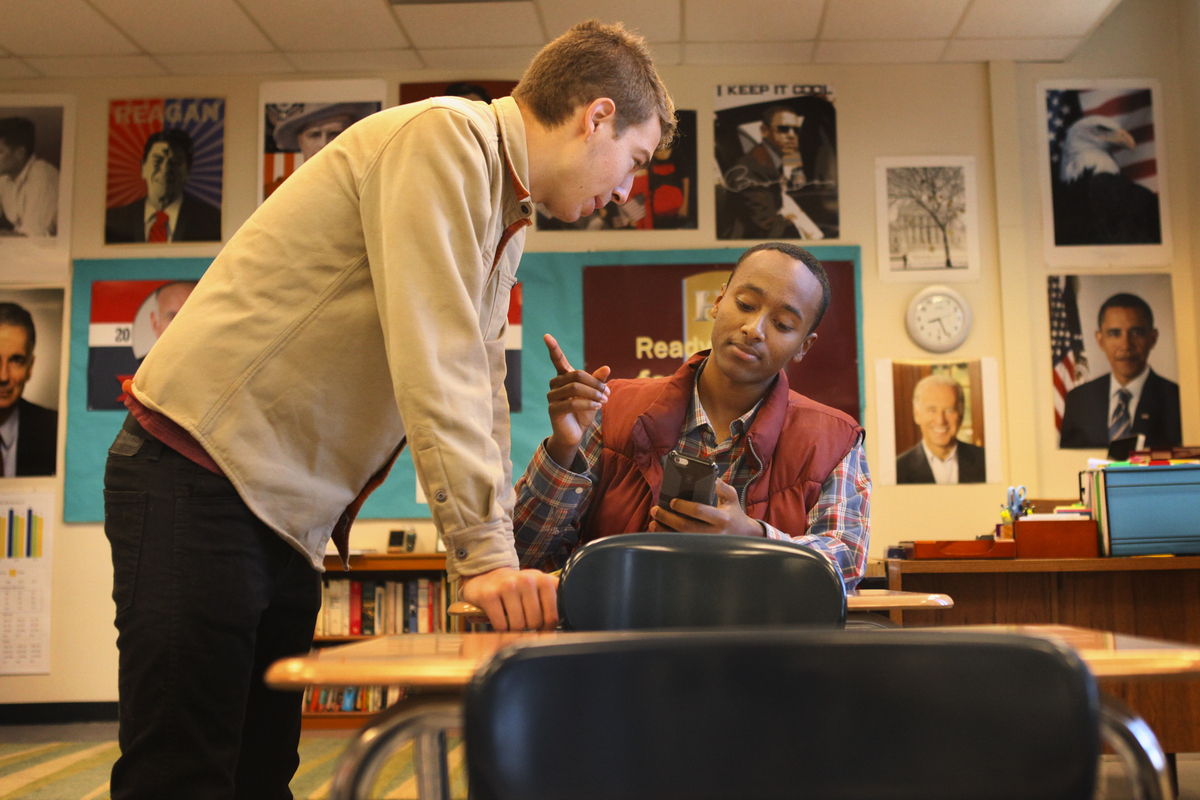 It got me wondering just how teaching in this country became so textbook- and reading-centered while the oral and aural bedrock tools of Western learning got pushed to the sidelines, long before the Common Core came to town.

Safe to say, iPads and smartphones would likely be banned in Pythagoras' classroom if he were teaching today.

Listening gets a passing mention in most states' Common Core standards. But it's cursory and seen only through the lens of outcomes: to respond and think well, you have to listen. Sure. But the process of listening is almost never addressed. Good listening, experts say, is a strategy to be practiced and honed, not just a skill.

And it's pretty clear few states and districts prioritize it.

"Listening is very challenging to teach, and it's been taken out of the curriculum at the K-through-12 level systematically throughout the last couple of decades," says Laura Janusik, an associate professor of communications at Rockhurst University in Kansas City, Mo.

That too few students are not honing their listening skills might be a bigger issue than many of us want to admit in an era when a glowing screen, large or small, is usually just an arm's length way.

Be honest: How often do you tell someone, "Yeah, I'm listening," while tap-tap-tapping away on your computer or checking your smartphone or doing three things other than really listening?

The fact is, students today are getting less practice at listening. At the college level, research shows that if students are required to take a basic communications course, "there is less than 7 percent of the class and textbook time that's dedicated to listening," Janusik says.

Janusik's work combines psychology, brain research and communications. She's interested in what's happening in the brain when people are listening.

Recent scholarship and the 2010 book The Shallows: How the Internet Is Changing the Way We Think, Read and Remember make the case that millennials are doing a lot more quick-hit skimming when reading and learning. They may be processing information in a way that's very different from previous generations because of the Internet.

Are students too often experiencing the classroom as a kind of mind-candy movie? You go into it for an hour or so and leave. That was fun/boring. The plot may not sink in. Even Bill and Ted listened closely to 'So-crates' in their Excellent Adventure. Dust. Wind. Dude.

Some believe careful listening is like entering a kind of meditative state or akin to the Buddhist concept of mindfulness.

Can students learn to listen, old-school style, without ubiquitous digital distractions? Sure. But that may not be realistic.

There are, however, practical classroom steps teachers can take, and Janusik says it starts by making links in an active, conscious way. Long-term memory research shows that learning happens best when students can make connections, build and attach information to other things swirling around in their cerebral cortex.

Janusik often tells her students, " 'OK, connect what we were just talking about to three things we've learned about in this class or another class.' " She adds that, "I find that just that simple strategy really helps them to remember things more."

Listening expert and writer Julian Treasure says he's currently crafting a school curriculum for conscious listening that he hopes to finish early next year. He hopes it will help show people how their communication experience is fundamentally changed by how someone is listening to them.

"This is a skill. This is not something that is just natural that we can expect everyone to be brilliant at just because we are human," Treasure says. "It is something we have to work out. Listening is an activity. It's not passive. We are creating the world by listening all the time."