Accessibility links
What The Movies Taught Us About Teaching : NPR Ed As part of the 50 Great Teachers series, NPR's Bob Mondello looks at what Hollywood has taught us about teachers. 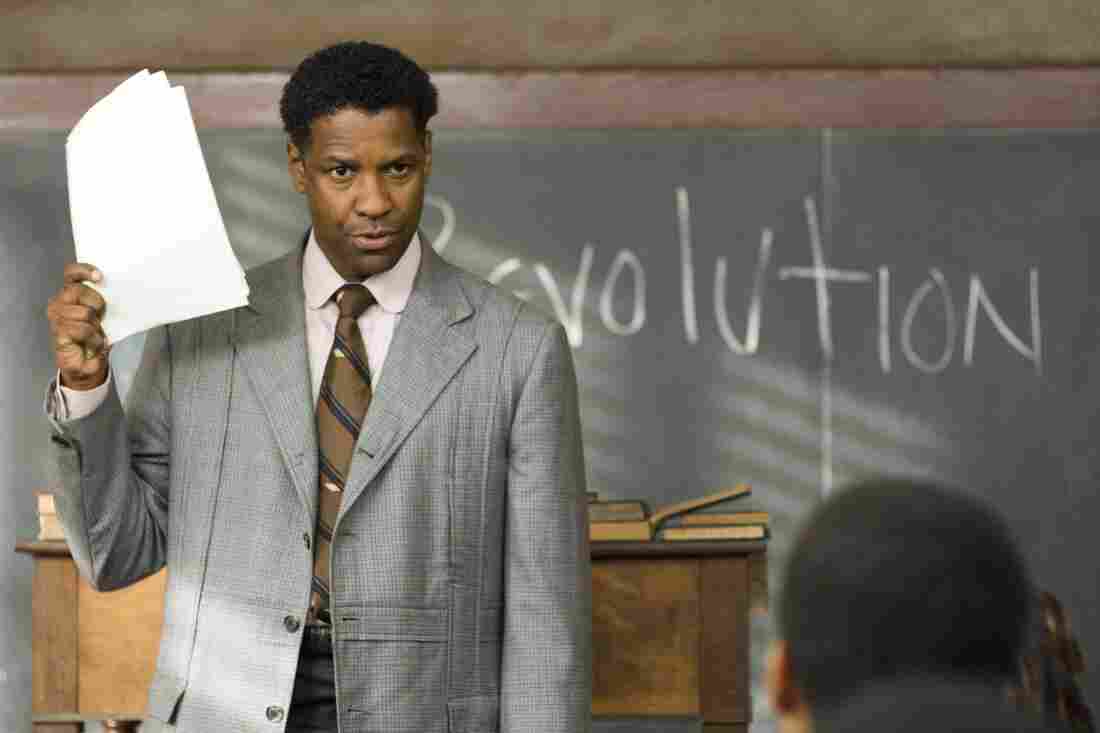 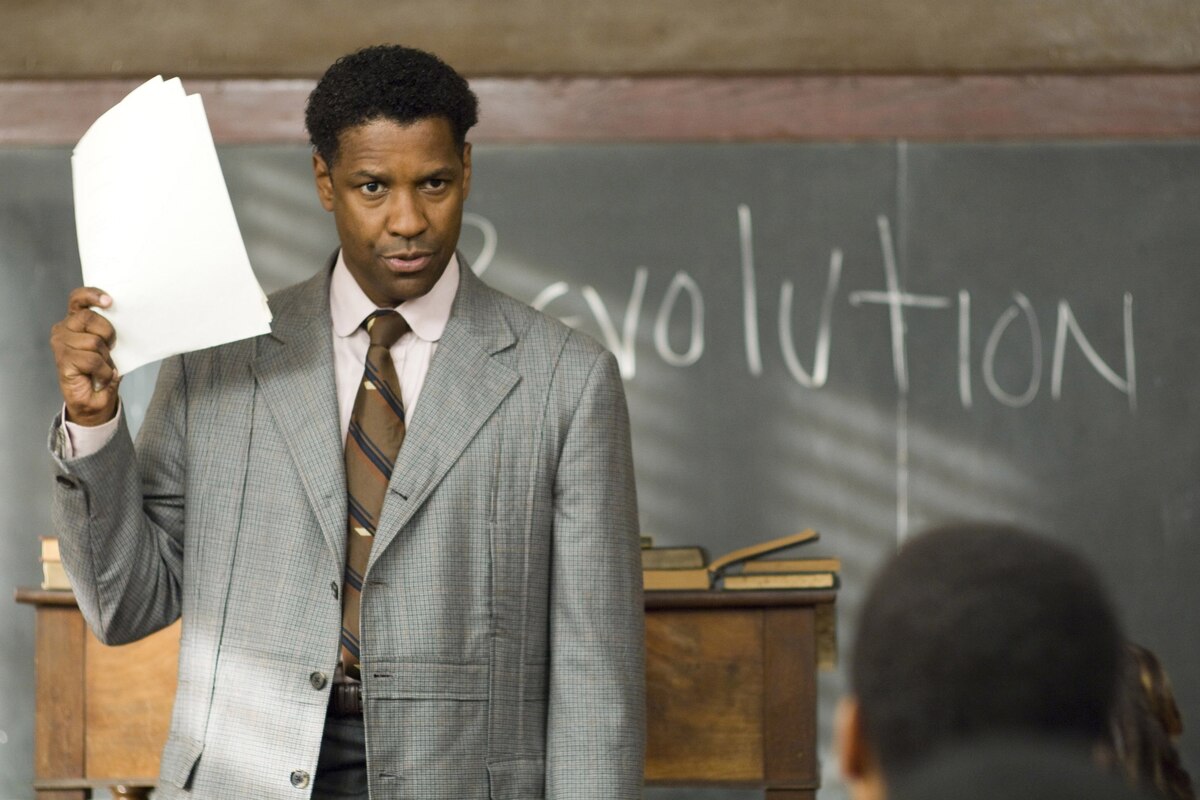 Denzel Washington in The Great Debaters.

Teachers are a type in Hollywood, as bound by convention as the guys who wear white hats in Westerns. They're mostly young, they're always energetic, and they answer to honorifics: Mr. Chips, Miss Brodie, Miss Moffat, Mister Miyagi, or just plain "Sir" (with love, of course).

They'll also answer to "Hey, wassup teach?" if that's what it takes to get their students to stand and deliver, to be great debaters or to form dead poet societies while heading up the down staircase in a blackboard jungle.

You know the type: hard-working, earnest, and most of all, inspirational. And they're all that while confronting — because Hollywood never does anything halfway — the sort of challenge that would give pause to a miracle worker.

The Miracle Worker's Annie Sullivan (Anne Bancroft), for instance, had to get through to a kicking, biting, almost feral Helen Keller (Patty Duke), who had been deaf and blind since infancy.

With only a few gestures to signal what she wants, 7-year-old Helen has no way to communicate with those around her, and initially, no concept of language itself. Her breakthrough comes in what amounts to a ferocious battle with Annie at a backyard water pump, where she suddenly realizes that the motions her teacher has been making in the palm of her hand connect to the movement of Annie's lips.

Annie spells out "w-a-t-e-r" and says urgently to this girl who can't hear her, "It has a name." And suddenly, in the midst of the struggle, Helen pauses. And you see her puzzle out that those movements of fingers and lips symbolize an idea: the wetness she's feeling.

She mimics Annie's hand movements, spelling it back. And Annie puts Helen's hand on her face and smiles and nods "yes." Immediately Helen wants other words ... pounding on the earth beneath her feet.

"G-r-o-u-n-d" spells Annie. And Helen spells it back, and as powerfully as it ever has on film, a whole world of knowledge opens up.

Most onscreen teachers confront more conventional students and forge bonds with them over more conventional problems: kids who don't think they want to learn ... who mistrust authority ... who are bored ... and who inspire teachers like Robin Williams in 1989's Dead Poets Society to climb on his desk and find other unorthodox ways to enliven classwork.

This gets him in trouble with the headmaster, and that's pretty much a standard Hollywood plot development. Teachers who care — and you wouldn't make a film about them if they didn't — must not only relate to students, but must also shield them from their own parents, from school administrators, from the police and from social forces that lead them to not value education in the first place.

Stand And Deliver's math teacher, Jaime Escalante (Edward Olmos), for instance, helps Latino students overcome first their own resistance to authority, and then, when they start to succeed, the unfair perceptions of administrators wielding standardized tests.

Denzel Washington is up against even stronger forces in The Great Debaters, a 2007 film set in the segregated south of 1935. When his all-black-college debate team is told it cannot compete in a national tournament, he lets them know his stake in their struggle is personal.

"You are my students. I am your teacher. That is a sacred trust," he tells them before urging them not to quit, though all the forces of a racist society are arrayed against them.

The "rebel with a class," as it were, is a relatively recent development in Hollywood. Onscreen teachers were long pictured in gentler terms, as protective and nurturing, rather than crusading. Movies tended to subscribe to The King and I's true, but sappy thought: That if you become a teacher by your pupils, you'll be taught.

No tough assignments in her class.

But a year before that movie came out in 1956, the rougher side of that getting-to-know-students equation was already on display in Blackboard Jungle, set in an inner-city school where teacher Glenn Ford sparred with rebellious student Sidney Poitier.

A few years later, teacher Poitier got his comeuppance in To Sir With Love, frustrated by kids who were rebellious for many of the same reasons that had driven his character in Blackboard Jungle. It's the realization that they are "kids" who need guidance that finally allows him to help them.

And that became the new template — teachers wading into issues of race, class, generational conflict — to help kids, armed with good intentions and reliably conventional wisdom.

The plots became familiar enough to be turned on their heads occasionally. Say, in the 2003 comedy School of Rock, where teacher Jack Black is almost inadvertently successful at winning over his charges. Or in this year's Whiplash, where jazz instructor J. K. Simmons hurls a chair at the head of an auditioning drummer when he gets the tempo wrong. Inspiration through fear — a definite outlier.

Far more frequently, movies reinforce the notion that in secular society, teaching is the closest thing we have to a religious vocation. You don't decide to teach, you're "called" to teaching as a profession. And as with religion, this "calling" is one in which the basic job hasn't changed in a thousand years:

You stand in front of your flock, which expects you to be above reproach both on and off the job. Your authority comes from on high. You need the patience of a saint, the wisdom of a rabbi and the endurance of a martyr. And, at day's end, the rewards are largely spiritual.

As when Helen Keller, having pretty much worn out Annie Sullivan demanding the name of every object around them, finally points to Annie herself ... and Annie, choking back tears, spells out "t-e-a-c-h-e-r." And Helen spells it back.

And the lesson begins.