Accessibility links
New GED Test Means Many Have To Start From Scratch : NPR Ed When the GED Testing Service created a new test in 2014, thousands realized they'd have to start the process over.

New GED Test Means Many Have To Start From Scratch

New GED Test Means Many Have To Start From Scratch 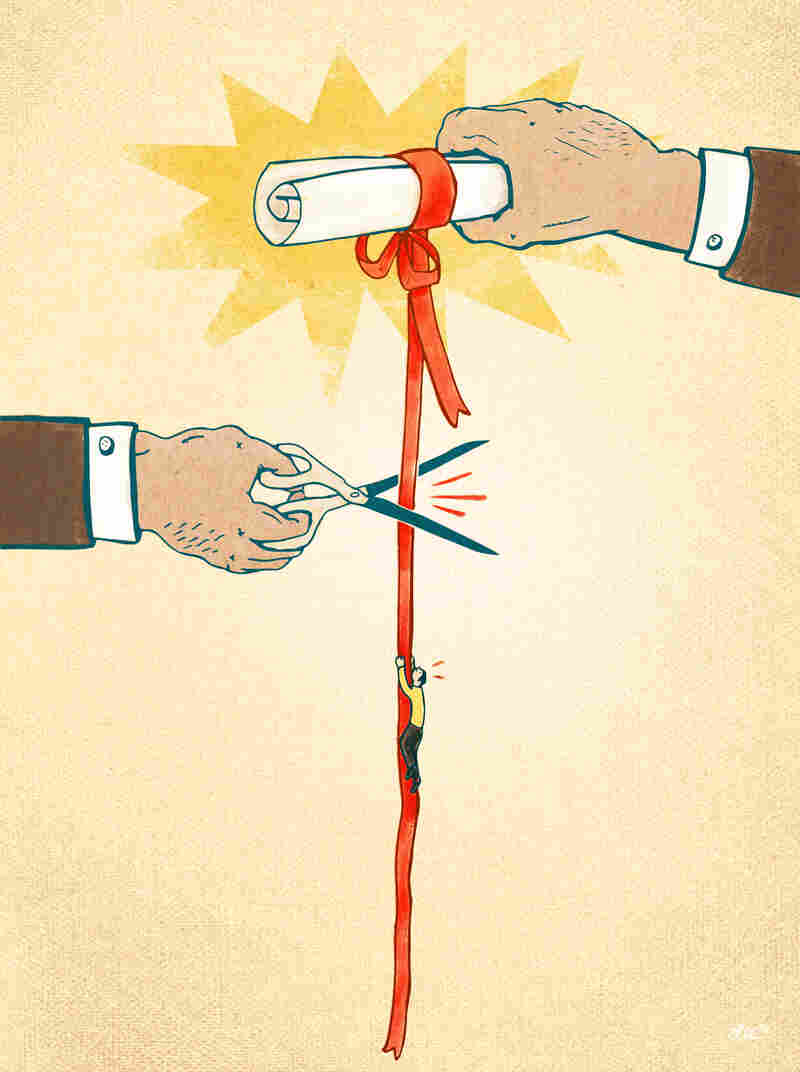 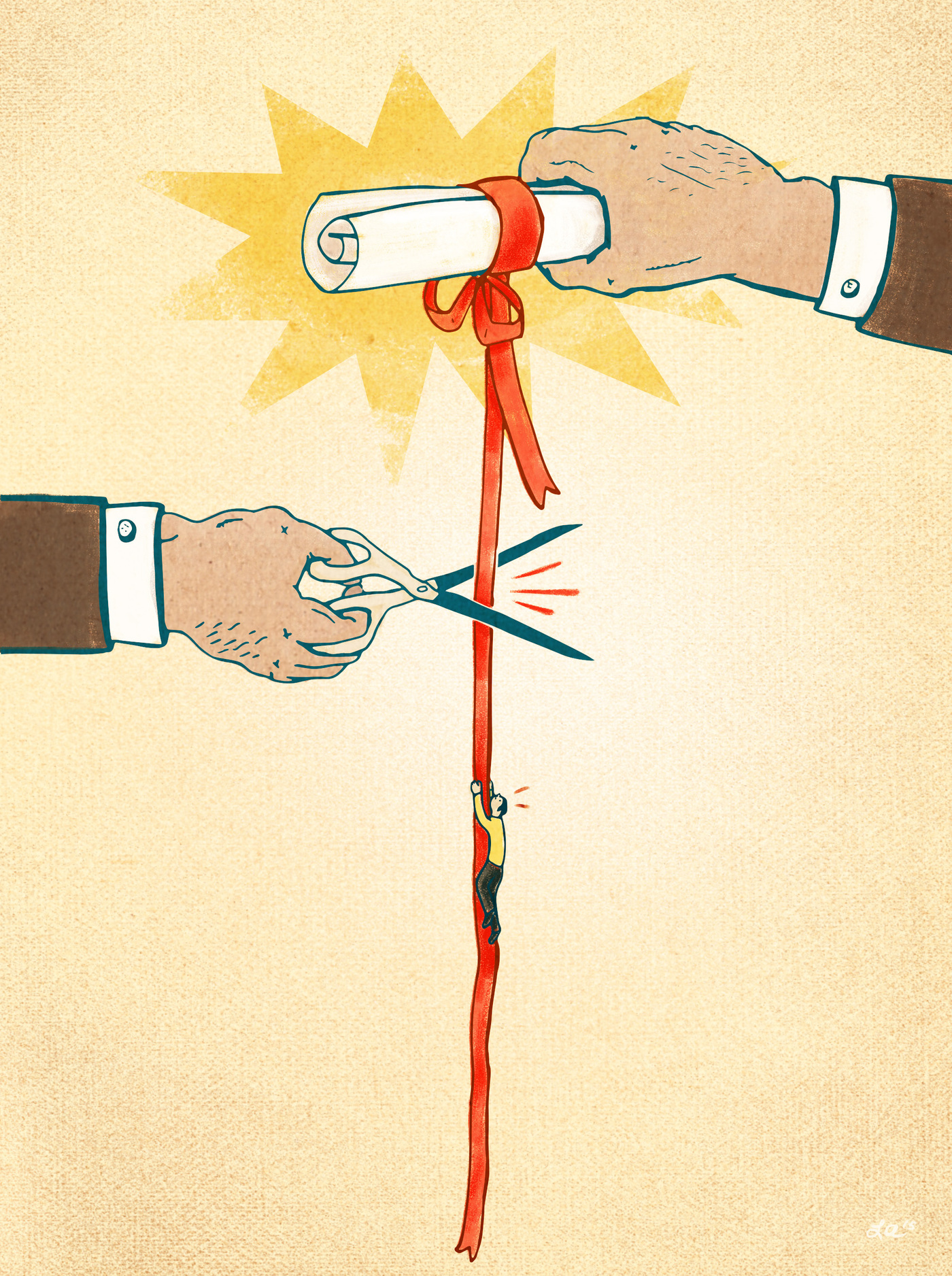 On New Year's Eve, 2013, as people were setting up house parties around the country and Times Square workers were preparing for the ball to drop, a small few were instead rushing to their local GED testing centers. Tyron Jackson, a 24-year old resident of Washington D.C., was one of them.

He had taken a prep course in the District and, because of aggressive marketing by the GED Testing Service, knew that Dec. 31 was his last good chance to pass the old version of the high school equivalency exam. For 2014, a newer, much harder test was coming.

The previous test came in five sections. You didn't have to pass all five at once. Instead, students could pass them one at a time, if necessary. The test was extremely long and many people only passed after combining scores from multiple attempts.

And so, as he sat there that day, with the clock ticking, Jackson got restless. He says he began rushing, just to be done with the thing.

When he got his score back weeks later, he was devastated. He had passed four sections and was just a few points shy of passing the fifth, social studies. "I was like 'Are you serious?' I was three questions off. Like 10 points!"

None of his passing scores would count. He'd have to start over completely.

'Won't Be No Guessin' In This'

Jackson is one of tens of thousands of people caught up in the latest overhaul of the GED. As we reported last week, the number of people who took and passed the exam in 2014 dropped sharply. The new test is more expensive, it is computerized, and it got more challenging. The GED Testing Service says the changes were needed, as with past upgrades of the test, to keep it meaningful and keep it in line with employer expectations.

We spoke with some GED takers this week and most found the changes frustrating. The new test places a much larger emphasis on critical thinking, say its creators. Some test takers, like Thomas Garrett, say that's made it much more difficult.

"Last year when it was on paper, all we had to do was mark the right answer," says Thomas Garrett, a 44-year old who is working on his GED in Raleigh, N.C. "On the new test you have to get the right answer and explain how you got that answer. So there won't be no guessin' in this."

Like Jackson, Garrett had passed some sections of the old exam before 2014.

He says he's having a more difficult time with the new one, particularly the computerized format. He was employed at a car detail shop for many years, before diabetes hindered his ability to work, and has little experience with computers.

While he says he understands the need to improve expectations and even the digital requirement, it's cold comfort after having his slate wiped clean. "To tell you the truth, I feel like it's wrong that me and the other people had to start over," he said. "I feel like they should give us credit for what we passed."

Jermaine Harris, 27, of Seattle, says he appreciates the new digital format, but also that the new test is "twice as hard."

Among the things he likes: The new test gives students their scores immediately upon completion, unlike the old test which took weeks to grade. It also tells them what areas of a subject they need to focus on improving.

Harris says he had also passed four out of five sections of the older version in 2013. He was angry when he found out, but added that he appreciates the more rigorous schooling he's going through: "This time I'm learning more and becoming more prepared for college." He hopes to attend community college and become a 3D graphic designer.

Harris says he dropped out of school after peer pressure led him to drugs and alcohol, and he went on to serve time in prison. He says now, he attends Alcoholics Anonymous meetings every day and that if he stays clean he'll continue to have access to housing and the GED program.

He had too much to lose, he said, to succumb to the frustration of losing all his previous work.

Harris has seen many of his friends end up dead or spending their lives in prison and believes if he doesn't finish his GED now the same thing could happen to him. "This really is all or nothing for me," he said.

Two years into his GED work, Tyron Jackson, too, is determined to finish. He plans to take the test again at the end of January, and is also philosophical about the changes: "Only thing I can say is nothing good is easy, you're gonna have to work hard for it."