Looking Across The College-Access Divide 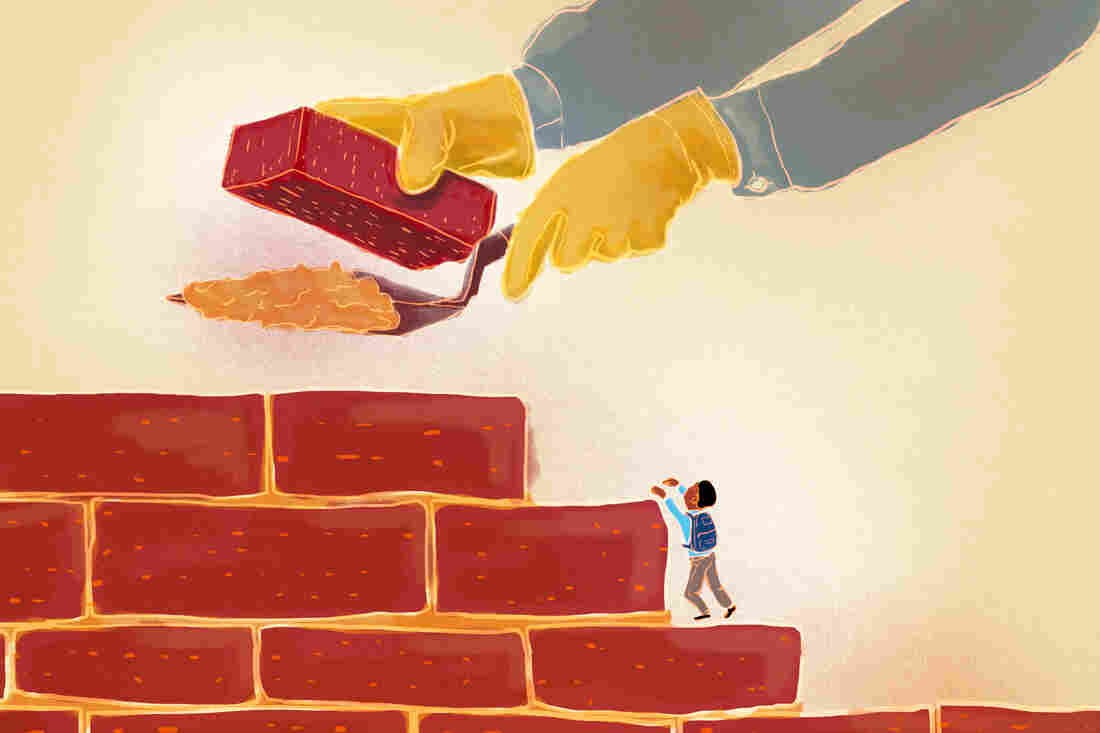 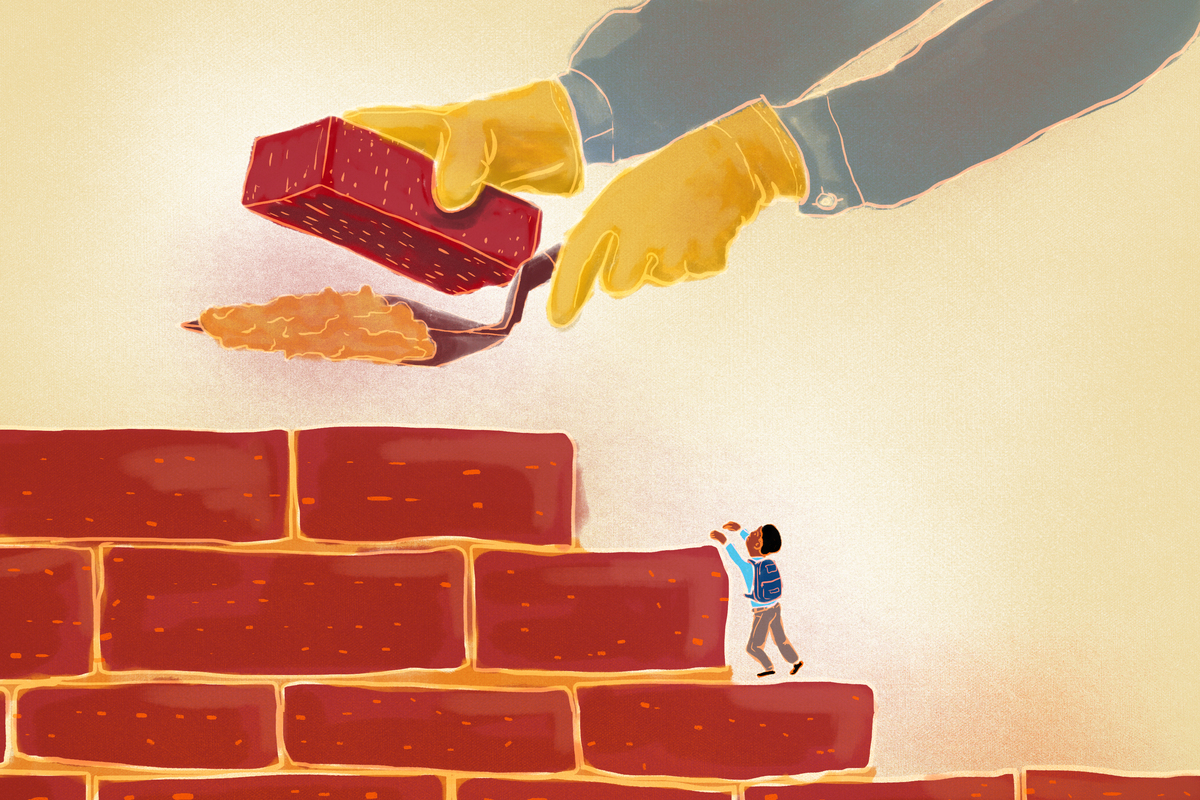 Beauty and peace radiate across the 319-acre campus of the elegant Cranbrook Schools in suburban Detroit. But in one corner of the upper school, overlooking the manicured lacrosse field, is an angst-filled office where students and their parents come to fret.

On a recent morning there, a pony-tailed soccer player was nervously fiddling with the zipper on her coat as she asked her college counselor if it was really necessary for her to do an admissions interview.

"It's just, like, nerve-wracking because, like, you don't want to say the wrong thing," she murmured, slumping in her chair.

"Your ZIP code can really determine what your future will look like."

An aspiring art historian down the hall was worrying that her latest grades — she got a B-plus in AP physics — could hamper her dream of following her mother and brother to Yale.

"I think it's, like, .7 percent away from an A-minus," she lamented, updating her counselor on her work with a physics tutor.

Deren Finks and his team were ready to help.

With 169 years of experience between them in college advising or admissions, Finks — the school's dean of college counseling — and his four associate deans and two support staff calmly dispense wisdom, manage expectations and offer practical training in such things as mock interviews for college aspirants.

Their work at Cranbrook bears almost no resemblance to the conversations about college taking place at another high school 19 miles south. There, in a crime-ravaged section of northeast Detroit, Andrea Jackson works with kids hoping to be the first in their families to climb out of poverty.

Jackson is the lone college adviser for the 400 students at the Osborn Collegiate Academy of Math, Science and Technology, a public school where most students are focused not on applying to Yale, but on surviving daily life.

"I need to start job-searching. I need help really bad," sighed a 17-year-old senior who turned up one morning in Jackson's office in the school's poorly heated library.

The girl hopes to enroll in a nursing program at a local community college next year but needs money now to make it through the end of high school.

Jackson and Finks are both skilled professionals charged with guiding kids as they figure out what to do next with their lives. But they are on opposite ends of what experts say is a glaring inequity in American schools.

The high-tech economy has made a college degree an essential ticket to a good job, and unraveling the college-application process is more complicated than ever.

Colleges Guide Low-Income Students From Getting In To Graduating

Yet students in poor urban and rural school districts can expect little or no college advising, an especially big problem given that many of them are low-income, racial minorities who would be the first in their families to go to college — meaning they need the most help with the application process.

"Your ZIP code can really determine what your future will look like," said Kim Cook, executive director of the National College Access Network.

Comparing a suburban private school with an inner-city one, of course, provides an extreme example of the disparities in college counseling based on socioeconomic status. But it symbolizes a gulf so critical that the Education Commission of the States reports that it's hampering the ability of the United States to keep up with international economic rivals, at least as measured by the proportion of the population going to college.

The average public high school counselor in the United States has a caseload of 471 students, reports the American School Counselor Association — nearly double the 250 recommended by the group and almost five times the number that counselors in private schools work with.

And what few counselors there are in the schools with the poorest kids may be "torn away because of testing requirements or because of disciplinary issues," said Maureen Hoyler, president of the Council for Opportunities in Education. "College admissions issues are not the highest on the priority list."

The drive to increase the number of people with degrees "has not been backed by meaningful state policies to improve college counseling in secondary schools," the Education Commission of the States report said.

There are several measures underway to address this problem. The American School Counselors Association, for example, has urged that overloaded counselors find some way to reach every student every year in some way, even if it has to be in groups rather than one-on-one.

A small number of communities have launched programs, often paid for by private donations, to supply volunteer "coaches" who help first-generation students get the college-going support they're not getting in high schools.

And correcting the inequity between the counseling available to rich and poor kids has become a priority of a White House initiative being pushed by First Lady Michelle Obama. Called Reach Higher, it encourages more high school graduates to go to college. The White House convened a meeting at the Harvard Graduate School of Education in July to begin devising ways of improving college counseling.

Still, even at schools where counselors have manageable caseloads, many have little formal training in college admissions. They may not know whether credits from a community college will transfer to a four-year institution, be ill-equipped to link students with schools where they'll do more than just run up crippling debt before dropping out, or be baffled by changing rules for the loans and scholarships the low-income students will rely on.

"Typically, you'll see the most well-trained people in the private, affluent schools and the least well-trained in low-income settings," said Mandy Savitz-Romer, a professor at the Harvard Graduate School of Education and a former counselor in an urban public high school. "The kids who need the most help are going to get the least-qualified support unless we train people very well for this."

It's unlikely that the typical public school can offer the resources available at private schools like Cranbrook, where tuition is $30,200 a year and alumni include former presidential candidate Mitt Romney.

But what happens at this private academy shows the edge afforded to kids already blessed with many advantages.

Cranbrook says all of its seniors enroll in college, mainly four-year schools, including some of the nation's top universities. The counselors hunt down kids who seem to be procrastinating, call admissions officers to pull strings, and spend hours getting to know their students so they can write detailed recommendation letters.

By contrast, in her Detroit public school Andrea Jackson has no help handling paperwork for the nearly 400 students she advises, and no access to the college application software that makes things easier for Cranbrook's crew.

She raises money from local businesses to take kids on college visits. She hosts financial-aid nights to get students face time with experts, and she works the phones to bring admissions officers to her school. She asks teachers to give extra credit during class time to seniors who fill out community college applications.

"I'm a college adviser, but I do more," Jackson says. "You cannot come into these type of communities and just say, 'Hey! You're going to college,' because, first off, they don't believe you."

Unusually for an urban high school, more than half of Osborn's students — 54 percent — enrolled in four-year institutions last year, with the other half headed to community colleges.

But advocates say her kids deserve more than even a devoted counselor like Jackson can give them.

This story was produced by The Hechinger Report, a nonprofit, independent news organization focused on inequality and innovation in education.