Accessibility links
Shrink The FAFSA? Good Luck With That : NPR Ed Lots of politicians are calling for a shorter FAFSA — the Free Application for Federal Student Aid. It now has more than 100 questions. But, it turns out, shortening the FAFSA is a tall order. 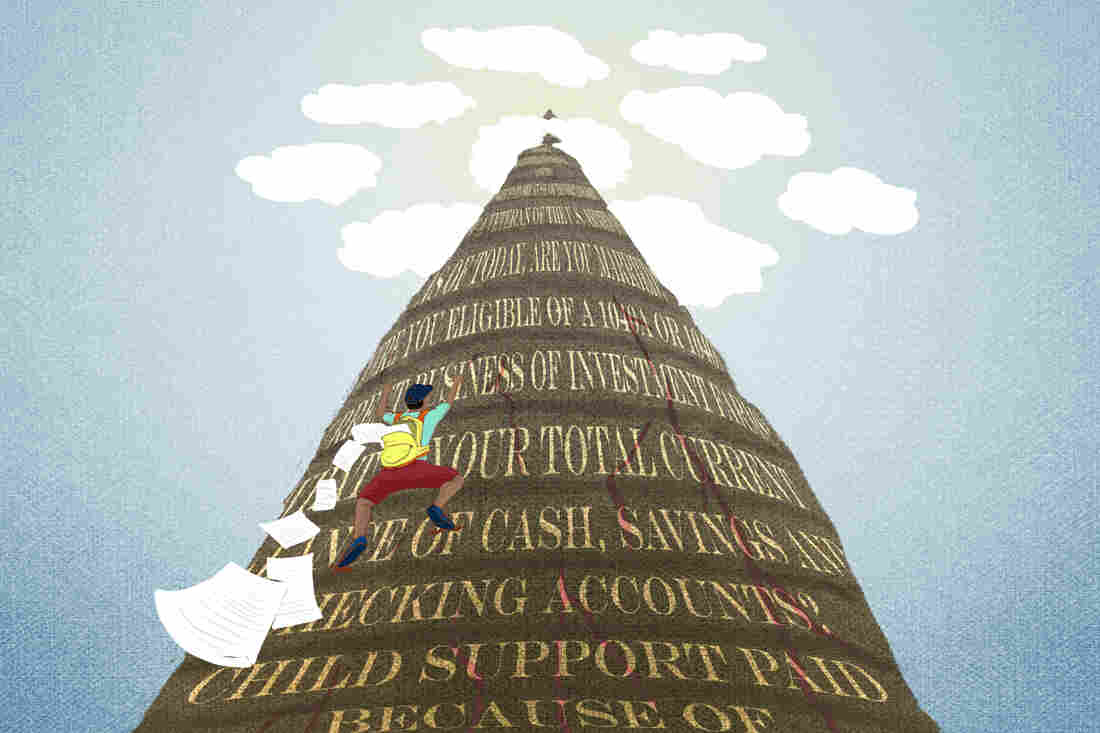 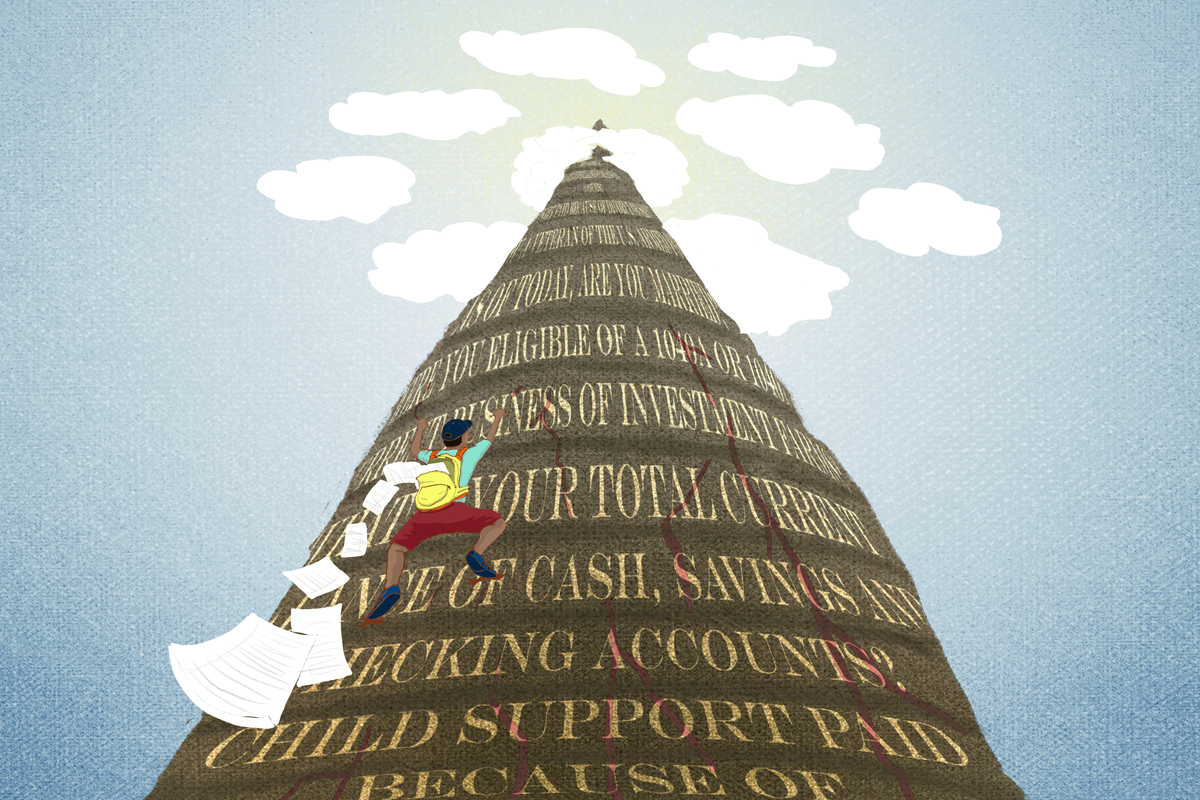 Shortening the FAFSA is a tall order.

Buried deep in President Obama's 2016 budget (Page 41) is a proposal to cut up to 30 questions from the Free Application for Federal Student Aid, or FAFSA.

The Obama administration has already done a lot to make the FAFSA easier — if not shorter. Online technology now allows students to skip questions that don't apply to them.

Congress wants to go even further. A bipartisan group of senators has proposed shrinking the FAFSA down — from 108 questions to two.

All of this is good news for students like Arnolda Butcher, a senior at T.C. Williams High School in Alexandria, Va.

Butcher lives with her older sister and, sitting in a small school office, needs question-by-question help filling out her FAFSA. The help comes courtesy of Margaret Feldman of the Virginia College Advising Corps.

Butcher navigates questions about her citizenship and state of legal residence, but she's stumped by question Number 60. It's about her parents:

What month and year were they divorced?

The Department of Education estimates it takes an average of 21 minutes to complete the FAFSA, but that's only for those who successfully completed the form. Elsewhere on the department's website it suggests students allow 55 minutes to complete and submit an initial application. Robert Kelchen, assistant professor of higher education at Seton Hall University, estimates it could take 10 hours to gather necessary documents and input information.

"Yeah, lots of people don't know that," Feldman assures her. "OK, you wanna use my phone or your phone?"

Butcher's friend, Salay Kamara, has similar trouble with the FAFSA. It's hard to answer questions about your parents, she says, when you don't live with them.

"You need, like, a lot of your parents' information. And sometimes, like, some of us can't get that," says Kamara, who lives with her grandparents.

Butcher gets her father on the phone, but the FAFSA has more questions for him. The conversation gets so complicated, she hands the phone to Feldman.

Forty minutes later, Butcher's finished. But it's hard to imagine her getting there without help. And she's not alone.

First lady Michelle Obama created a contest that asks students to submit a video of the most creative way their schools are completing the FAFSA.

One recent study found that, in school year 2011-2012, some 2 million students who would have qualified for federal Pell Grants simply didn't fill out the form — or failed to finish it.

Given the FAFSA's length and politicians' apparent willingness to shorten it, why is it still more than 100 questions?

Well, a FAFSA that is too simple — or doesn't ask all the right questions — could cause a chain reaction that would make the process of applying for financial aid even tougher than it already is.

Those who file the FAFSA have 72 percent higher odds of persisting through college versus those who don't file the FAFSA. That number jumps to 122 percent when considering only low-income Pell Grant-eligible students.

Before the FAFSA, a student applying for federal aid began by completing a free paper application at their college of interest.

Dan Madzelan, now at the American Council on Education after decades at the Department of Education, says the process confused students because there was much more to the form than just the section needed to determine federal aid eligibility.

Students could keep going, answering many more questions, to be considered for state and institutional aid. 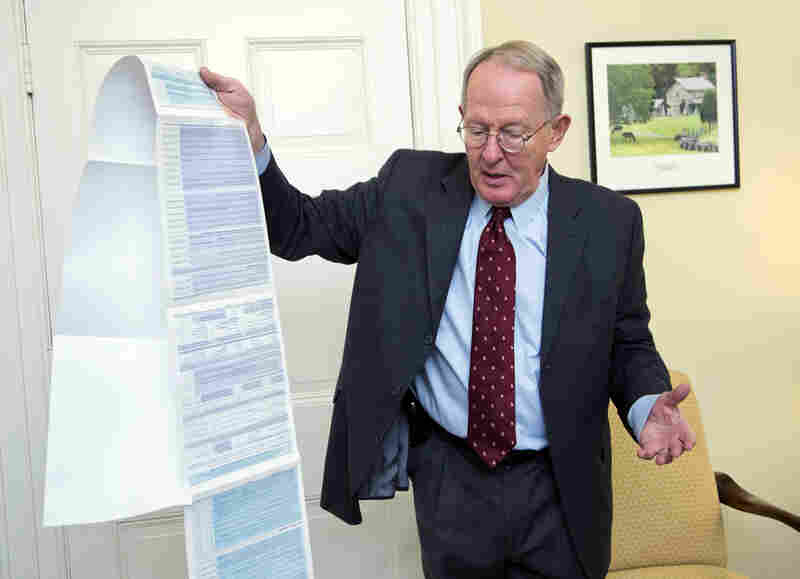 Here's the problem: If they kept going, they generally had to pay a fee. And some students applying just for federal aid ended up paying unnecessarily.

In 1992, Congress stepped in with the FAFSA. The idea was to create one universal, free application for federal, state and institutional aid.

One form to rule them all.

But, for the idea to work, the federal government had to incorporate lots of questions that various states and schools used to determine aid eligibility.

For example, questions Number 24 and 25 ask about an applicant's parents' highest level of education. But the federal government doesn't need that information. Madzelan says those questions were included at the request of states.

This is why shortening the form is easier said than done.

Nothing's stopping states and schools from going back to the old days of requiring their own applications for student aid. In some ways, that's already happening.

Used by more than 350 of the nation's most selective schools to distribute $9.5 billion in institutional aid to undergraduates in 2013-2014, the CSS PROFILE was introduced by the College Board during the 1996-1997 school year as a supplement to the FAFSA.

One study estimates that nearly 20 percent of freshman who received a Pell Grant failed to renew their FAFSA the following year.

The CSS PROFILE has almost twice as many questions and requires applicants to provide a comprehensive picture of their finances. It also costs money ($25 for the first institution and $16 for every institution after that).

To be clear, the CSS PROFILE is only used by a small minority of the nation's higher ed institutions. But it — or forms like it — could become much more common if lawmakers shorten the FAFSA, says Justin Draeger of the National Association of Student Financial Aid Administrators.

One possible fix would depend on a crafty way of shortening the FAFSA — without actually shortening it.

How does your high school compare against others in FAFSA completion rates? Find out here.

A magic trick, courtesy of the IRS. More on that, later today.

Read part two of our coverage on the FAFSA, "The Magic Trick That Could Shorten The FAFSA."