Accessibility links
Common Core Means 3 Tests In 3 Years For Michigan Kids : NPR Ed As exams kick off for the controversial learning standards, both students and teachers are trying to cope with the stress — and the political one-upmanship. 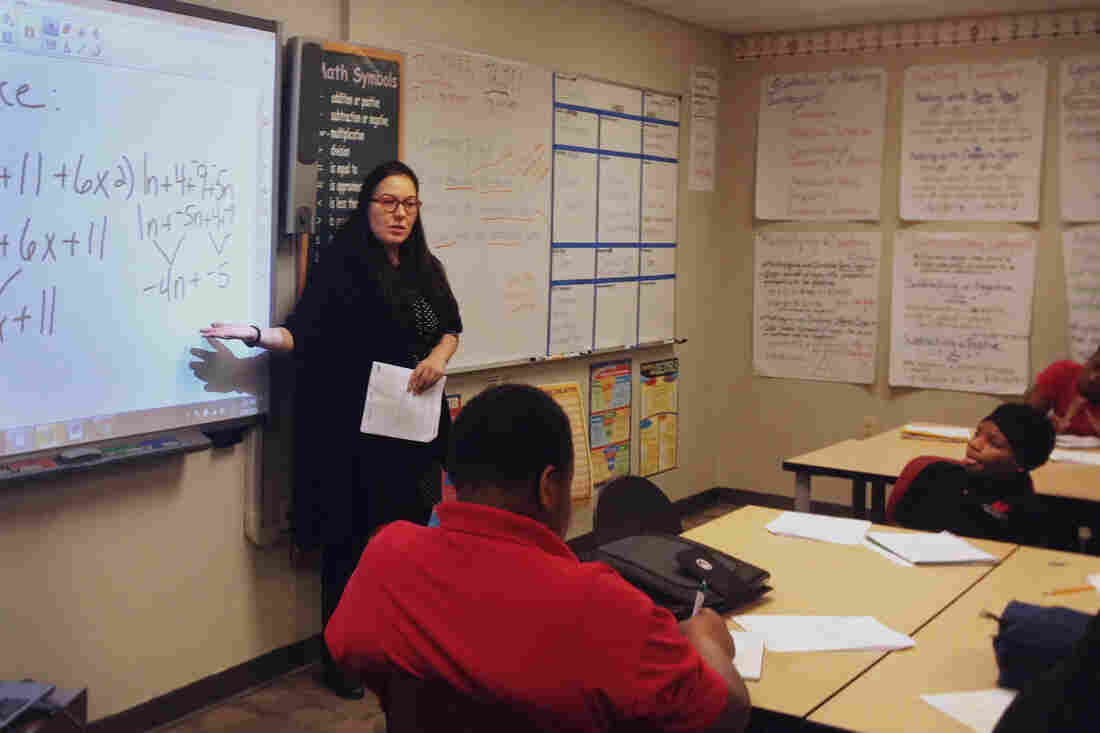 As political battles rage over the Common Core, teachers like Jennifer Bahns at the University Prep Academy middle school in Detroit are trying to prepare their students for the first major Common Core exams this spring. Erin Einhorn/Hechinger Report hide caption 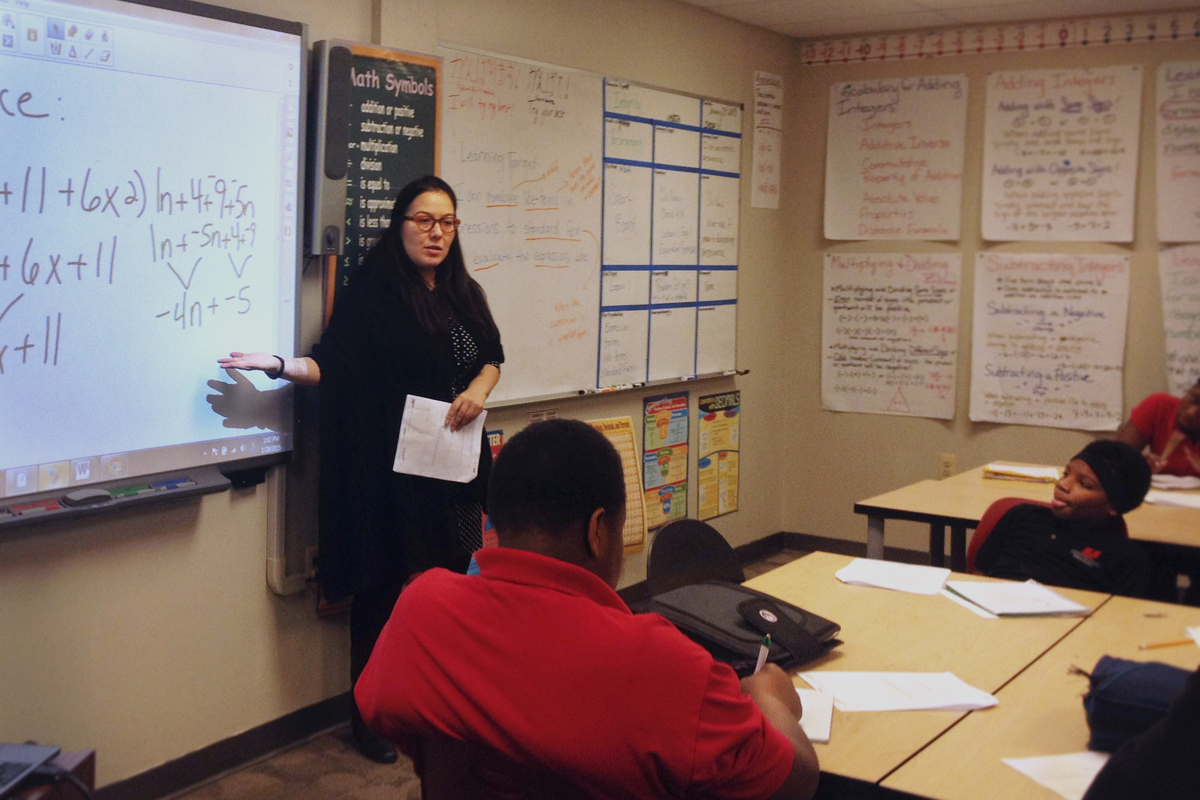 As political battles rage over the Common Core, teachers like Jennifer Bahns at the University Prep Academy middle school in Detroit are trying to prepare their students for the first major Common Core exams this spring.

This story was produced by The Hechinger Report, a nonprofit, independent news organization focused on inequality and innovation in education. Read more about the Common Core.

Partisan bickering over the Common Core has pushed Michigan legislators in recent years to freeze — then unfreeze — spending on the new learning standards. They've banished the new exam that education officials had been planning to introduce this year and forced the creation of a second new test for 2015 — and a third one for 2016.

Through it all, Jennifer Bahns and her students have just been trying to keep up.

Bahns teaches seventh-grade math at the University Prep Academy Middle School in Detroit — a highly regarded charter school that draws kids from some of this city's most struggling neighborhoods. 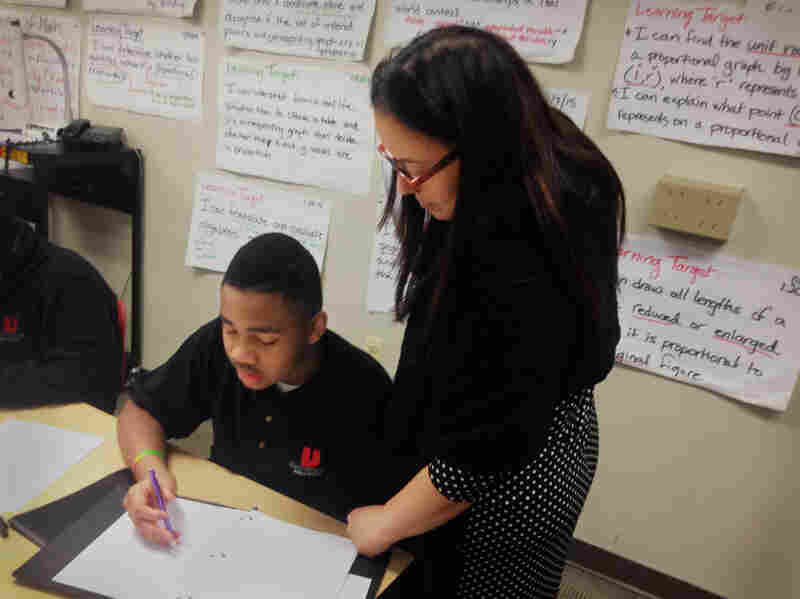 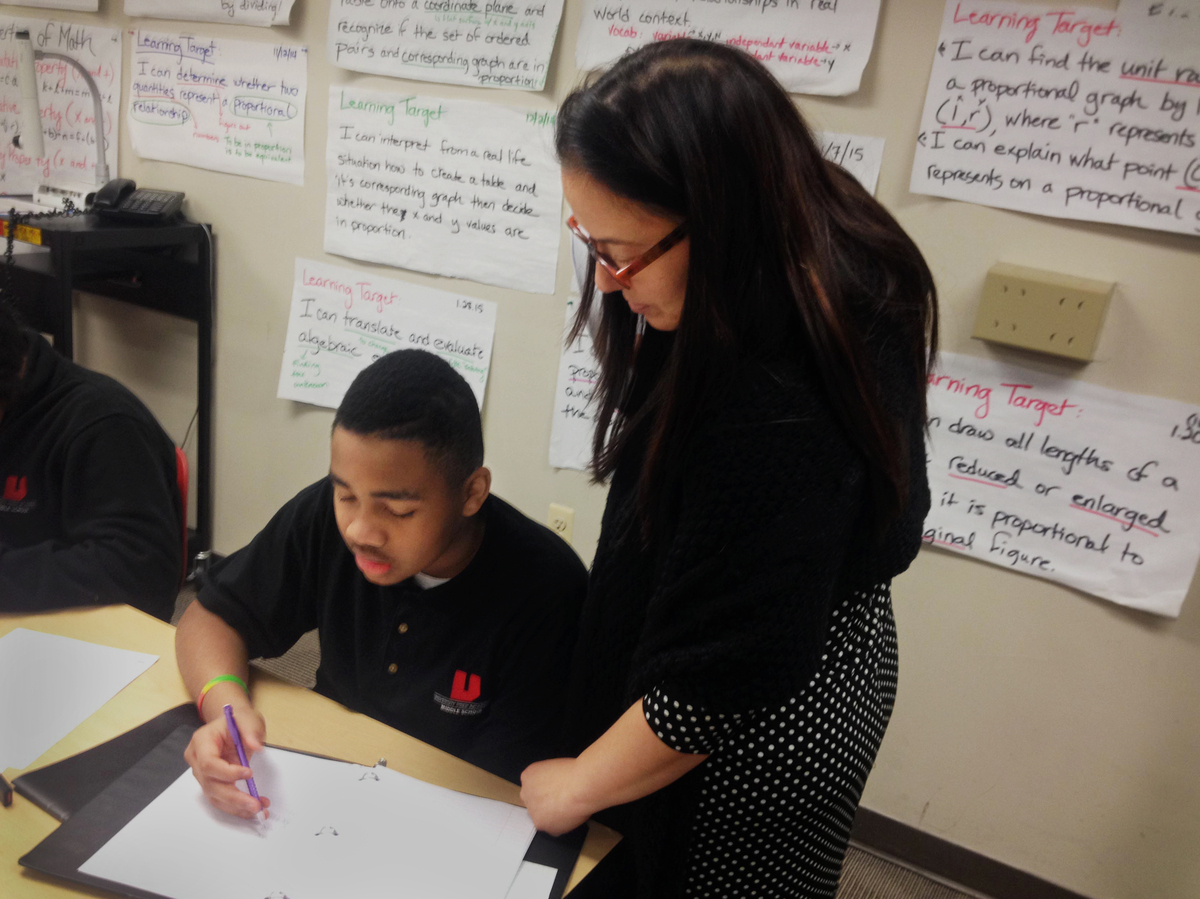 Teacher Jennifer Bahns helps her seventh-graders work through algebraic equations that, before the Common Core, were taught in eighth or ninth grade.

She has no influence over the politics of the Common Core — slammed by critics on the right as an overreach by the federal government and by critics on the left as a profit engine for testing companies — and she can only guess how ongoing conflicts and confusion over Common Core in state legislatures and education agencies will ultimately play out in American schools.

But, as Michigan and more than 40 other states plan to administer new exams linked to the standards for the first time this spring, Bahns is among hundreds of thousands of teachers nationwide who have had no choice but to plow ahead with implementing changes in their classrooms.

The transition is especially tough in Michigan, where political one-upmanship has made it likely that students here will take three different state exams in three years. The measures that determine which kids are destined for success — and which ones are falling behind — have been repeatedly changed by lawmakers.

To meet the standards, Bahns' seventh-graders this year are grappling with algebraic equations that used to be taught in the eighth or ninth grade. They're being asked to learn multiple solutions for each equation, and to write sentences explaining how they computed their answers.

In their English classes, they're being asked to delve into articles and learn to cite evidence from those texts in their writing.

It's a lot for these kids, many of whom face the trials of poverty on top of their schoolwork. That said, on a recent afternoon, as Bahns took her students through a series of problems, most of them were catching on.

"Oh, this is easy!" one student said, as Bahns showed him how to break down an algebraic expression a simpler form.

Other students nodded in agreement as they worked through a group of equations. But when Bahns told the students to plug in negative numbers for each of the variables, the sounds of confidence around the room sputtered into confusion.

The problem was with the negatives: These kids hadn't worked with negatives in months and couldn't remember how to handle them. Bahns tried quickly to remind her students that two negative numbers multiplied together make a positive number, but the class remained so stumped that she had to improvise. She scrapped the lesson she was teaching and launched into a review of negatives. That meant she'd have to spread over two days a lesson that was intended to be taught in one. And it meant her students would be yet another day less prepared for the new, unknown — and utterly mystifying — state exam that was looming just two months away.

The class showed the Common Core delivering on its promise — a teacher pushing her students to learn more advanced material so they'll be better prepared for college and careers. It also showed why the new standards have made so many educators so upset. For older students especially, who have had to switch to the new rigorous material halfway through their school careers, such impromptu reviews keep coming up. In Bahn's class, there won't be enough time to cover all the material her students are expected to know before test time.

"They want us to go deeper but it's impossible. ... There's no give anywhere."

This year's test — the first state exam to be administered entirely online — presents a daunting challenge. Students who perform poorly could have trouble getting into top high schools. Schools like University Prep — which must aggressively compete for students in a city where kids can freely choose from a long list of charters, city schools and suburban schools — could lose students and resources if they drop on the annually published state rankings. At some schools, low scores could jeopardize job security for teachers and principals.

And while every school in Michigan is facing the same ordeal, research shows that schools like University Prep, which have high numbers of kids living in poverty, tend to take a bigger hit on new exams than schools with more affluent students. The online test format is expected to only exacerbate that disparity.

And then there's the political maneuvering.

Michigan was one of the first states to embrace the Common Core. The Michigan Board of Education (eight officials chosen in statewide elections) unanimously adopted the standards in 2010. The state soon joined the Smarter Balanced Assessment Consortium, one of two state coalitions that received federal funding to develop Common Core-aligned exams that are being administered across the country this spring.

There was so little controversy around the board's decision, the move barely rated a mention in local news reports. Elected officials who later raised alarms said they were not aware that their state had adopted the new standards.

And a group of opponents in the state legislature made Michigan one of the first states to slow Common Core implementation when they slipped language barring spending on the new standards into the state budget at the eleventh hour.

Michigan's Republican Gov. Rick Snyder, a Common Core supporter, had no power to remove the language from his $49.5 billion spending bill. And so, for the next few months, schools were thrown into limbo, unsure if they could continue to pay for teacher training or materials related to the Common Core. The state Education Department even wondered if it had to take down part of its website.

Funding was restored in October 2013 after four months of hearings, but Common Core opponents were emboldened by their brief victory. Last year, just nine months before Michigan planned to administer the Smarter Balanced exam to students in grades three to eight, the Republican legislature shut the test down, barring the Smarter Balanced test and joining a growing number of states that have pulled out of Common Core consortia in favor of single-state exams.

Michigan didn't have enough time to create a new exam — a process that typically takes three years — but the legislature left enough legal wiggle room to allow the Education Department to repackage the Smarter Balanced exam for 2015, just under a new name.

When students in grades three to eight take the new Michigan Student Test of Educational Progress (M-Step) this spring, all the reading and math questions that will count toward their scores will be drawn from Smarter Balanced exam materials. Michigan is still listed as a full member of the Smarter Balanced consortium and will pay its full $4.9 million fee for 2015.

Plans for 2016 are still underway as the state talks with test makers and considers its options, but the testing turmoil most likely means that Michigan kids will end up taking three different tests in three years: the state's traditional MEAP in 2014, the Smarter Balanced-based M-Step in 2015 and a new, unknown M-Step in 2016.

Asked about the 2016 test, state education officials issued a vague response saying only that they were "required by legislation to develop a [Request for Proposals] for a new assessment." They added that, until that process is complete, "it is unknown if this year's assessment data could be compared to next year."

The constant changes will likely make it impossible to track student progress from one year to the next — a problem that has forced the state to seek a waiver from federal rules requiring states to hold schools accountable for student progress over time. The confusion has also put on hold another legislative priority: a plan to use student test data in teacher evaluations.

Still, teachers fear they'll be blamed for the resulting tumult and school leaders worry the commotion will affect their schools' standings in annual state rankings.

The rankings are especially crucial in Detroit, where population loss and the charter boom have forced schools into heated recruitment wars. A single year of bad scores here can sink a school if too many students — and the education dollars they bring with them — decide to go elsewhere.

So for teachers like Bahns and her colleagues at University Prep, the politics around testing have added an extra layer of anxiety to the already formidable challenge of teaching to the more rigorous standards.

Both sides of the debate in Lansing, the state capital, say they regret the way the political dispute has affected classrooms, but are quick to blame each other.

"Legislators should not be guiding educational decision making or second-guessing the good [decisions] we make," said John Austin, who now heads the state's Board of Education. "Their gumming up the process of moving ahead with the Common Core certainly does not help advance the goal of educating our kids."

Tom McMillan, who led Common Core opponents in the state house before leaving office this year due to term limits, shot back that the mess could have been avoided if the Board of Education had held a more public process when it adopted the standards in the first place.

"The chaos was created by the state Board of Education and the Michigan Department of Education sneaking it through in 2010 without looking for a debate and making sure people were signed onto it," said McMillan, a Republican who represented the wealthy Detroit suburb of Rochester Hills.

Uncertainty in schools may be exacerbated by the arrival of new legislators with new priorities every few years since, under Michigan law, legislators are term-limited to eight years in the senate and six years in the house.

But experienced educators say they do their best to tune out the noise.

"I'm 71 years old, and I'm so used to this," sighed Narda Murphy, the superintendent of the Williamston school district in a suburb of Lansing. "If somebody decides on a political level to throw out the Common Core, they'll bring in some other framework. To me, it's a lot of wasted energy."

As for Bahns, this is her eighth year in a classroom, and she's not about to let politics or outside pressure affect her students.

"It's really, really ridiculous to me," she said. "But what I tell the new teachers is just do the best you can do because that's all you can do."

This story was produced by The Hechinger Report, a nonprofit, independent news organization focused on inequality and innovation in education.