Accessibility links
Fundraising Site For Teachers Illuminates Classroom Disparities : NPR Ed Since DonorsChoose.org launched in 2000, teachers have been able to crowdfund rather than use their own money to pay for supplies. A broader look at the site's data shows who needs what. 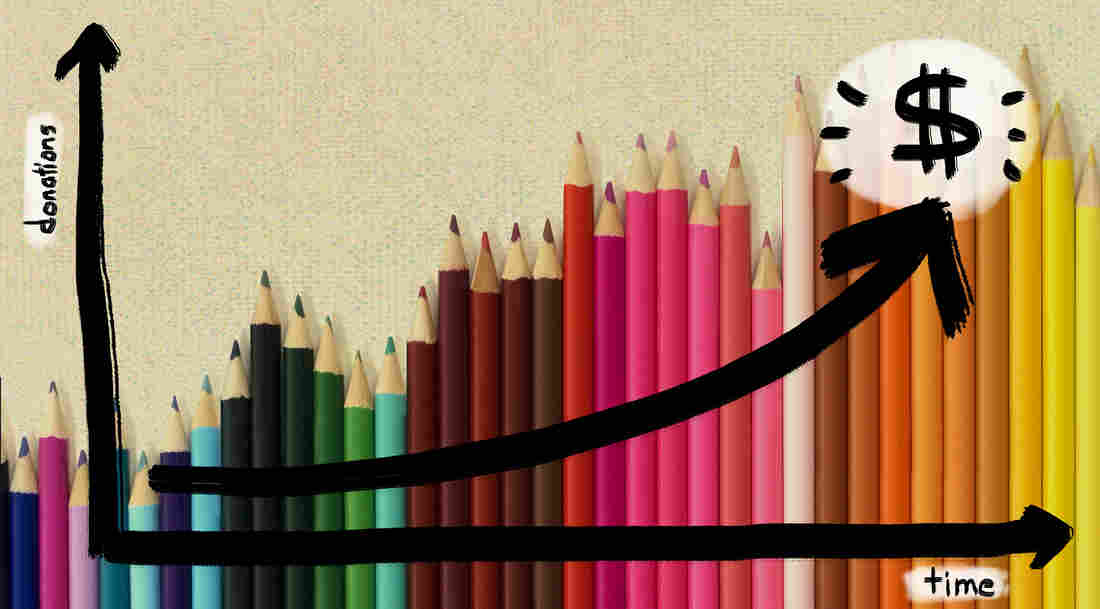 With DonorsChoose.org, teachers have an alternative to dipping into their own pockets to pay for classroom supplies. LA Johnson/NPR hide caption 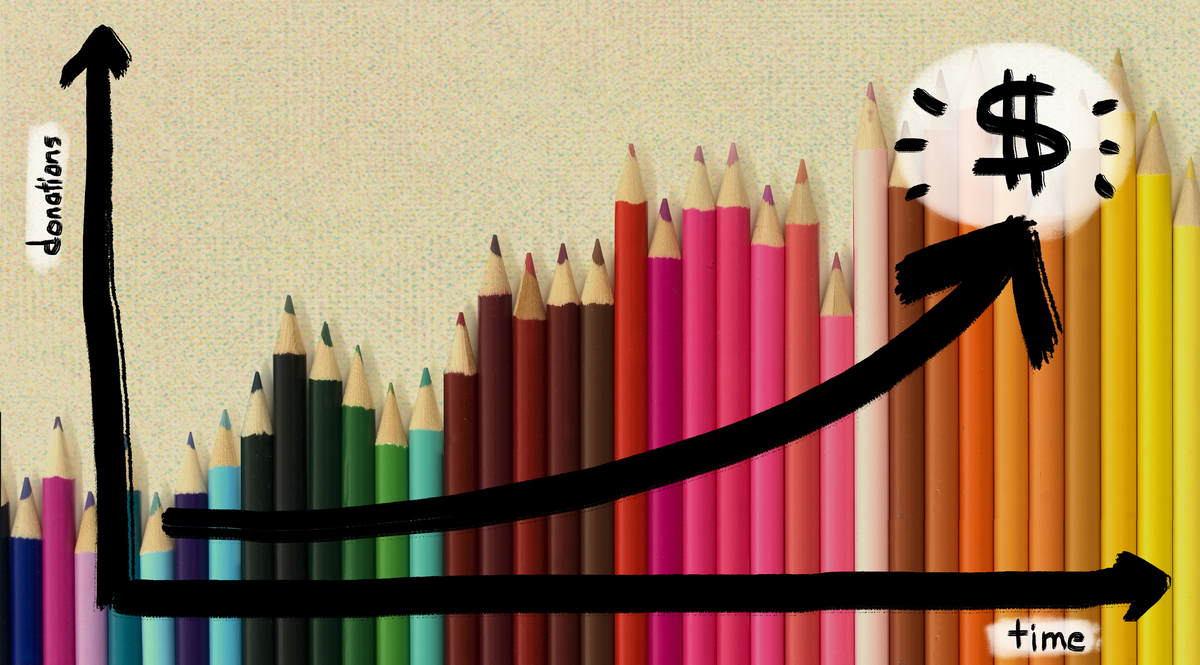 With DonorsChoose.org, teachers have an alternative to dipping into their own pockets to pay for classroom supplies.

What happens when a teacher wants to assign an extra book for class, but the school can't afford a copy for every student?

For Dana Vanderford, an English teacher at L.W. Higgins High School in New Orleans, the book was Eric Schlosser's Fast Food Nation. Buying enough copies for her class would have cost more than $800. Not an option.

In the past, teachers in Vanderford's position had a few options: Pay the costs themselves, ask students to pay, or somehow try to raise the money.

In 2000, DonorsChoose.org made that "somehow" a little easier. Public school teachers can use the site to "crowdfund" classroom project ideas, raising donations to pay for everything from basic supplies to technology upgrades, field trips, and more.

Five days. That's how long it took Vanderford to raise the money she needed to buy a copy of Fast Food Nation for each of her students.

For the past 15 years, DonorsChoose.org has helped teachers like Vanderford raise more than $310 million — with more than half of those donations going to America's poorest schools.

It's a drop in the bucket of the more than $600 billion spent on K-12 education by localities, states and the federal government, but Charles Best — DonorsChoose.org's founder/CEO and a former high school social studies teacher — thinks its impact goes beyond delivering classroom supplies.

During his keynote address at this year's SXSWedu, Best highlighted some of the many ways he sees DonorsChoose.org shaping education. One example: When a teacher posts her idea online, the site collects dozens of variables about the teacher's project, school and students. Why is that a good thing?

More than a year ago, that data became publicly available. And with it, Donorschoose.org can not only reveal what classroom projects are popular but also illuminate the vast disparities in resources among public schools.

The overwhelming majority of students benefiting from projects posted on DonorsChoose.org are low-income. The poorest schools also have a higher success rate when it comes to funding their projects — 70 percent versus the 66 percent average among all projects.

The site has also been instrumental in helping to channel donations to schools hit hard by natural disaster. Below is a map of every successfully funded DonorsChoose.org project along the Gulf Coast in the year before (2005) and after (2006) Hurricane Katrina. 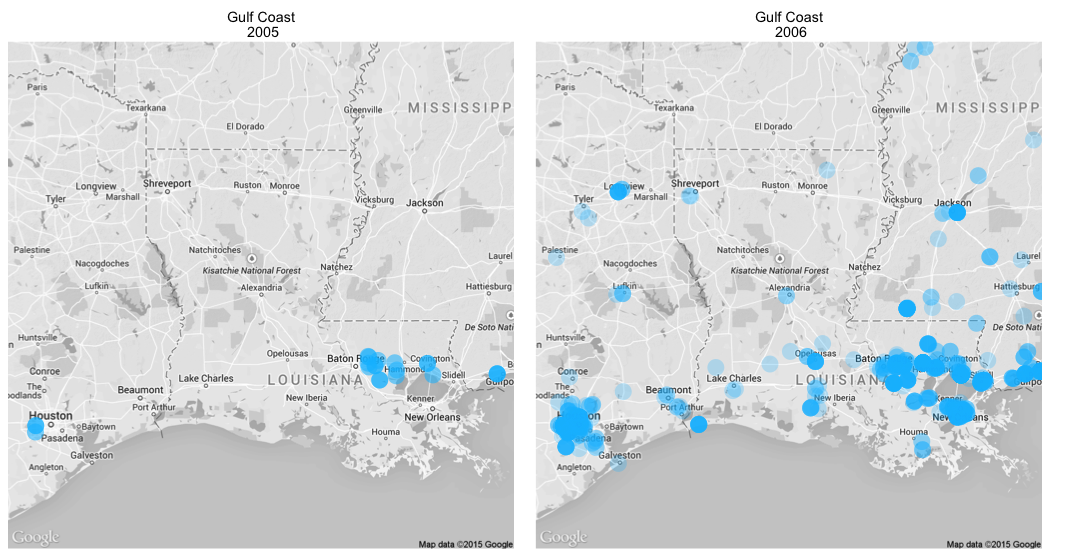 DonorsChoose.org projects before and after Hurricane Katrina data.donorschoose.org hide caption

The structure of DonorsChoose.org allows the public to decide which projects get funded. Requests for books and efforts to improve literacy are the most successful with nearly $75 million in donations — more than math and science projects combined.

Below is a table of the 10 most requested books on DonorsChoose.org.

California and New York top the list for total donations received by a state, but, after controlling for population differences, Idaho and Hawaii tie for first place with $0.45 per resident. Also high on the list is Utah, where 60 percent of adults belong to the Church of Jesus Christ of Latter-day Saints and are expected to donate 10 percent of their income to charity.

In most states, large differences remain in the amount of public money sent to the lowest-income schools versus the highest-income schools. Funding tends to be based on property taxes, and states struggle to address the inequity.

DonorsChoose.org gives teachers at high-poverty schools access to an alternative source of funding. But it can also be a lot of work: From creating and publicizing the online request to following up a successful campaign with personalized thank-you notes from every student.

"[My first project] was literally for pens, pencils, crayons, glue and rulers. Just very minimal stuff," says Smith. "I never realized schools wouldn't have these basic necessities for the kids."

Now in her second year of teaching, Smith has already funded 13 different projects, buying a pair of iPads, a printer and equipment for dissections in her anatomy and physiology class — something her students had never experienced.

That's a lot of earthworms, rats and sheep eyeballs that Smith never could have paid for on her own.