Accessibility links
Stretching One Great Teacher Across Many Classrooms : NPR Ed A Nashville middle school is test-driving a big idea: To put a great teacher in charge of multiple classrooms. 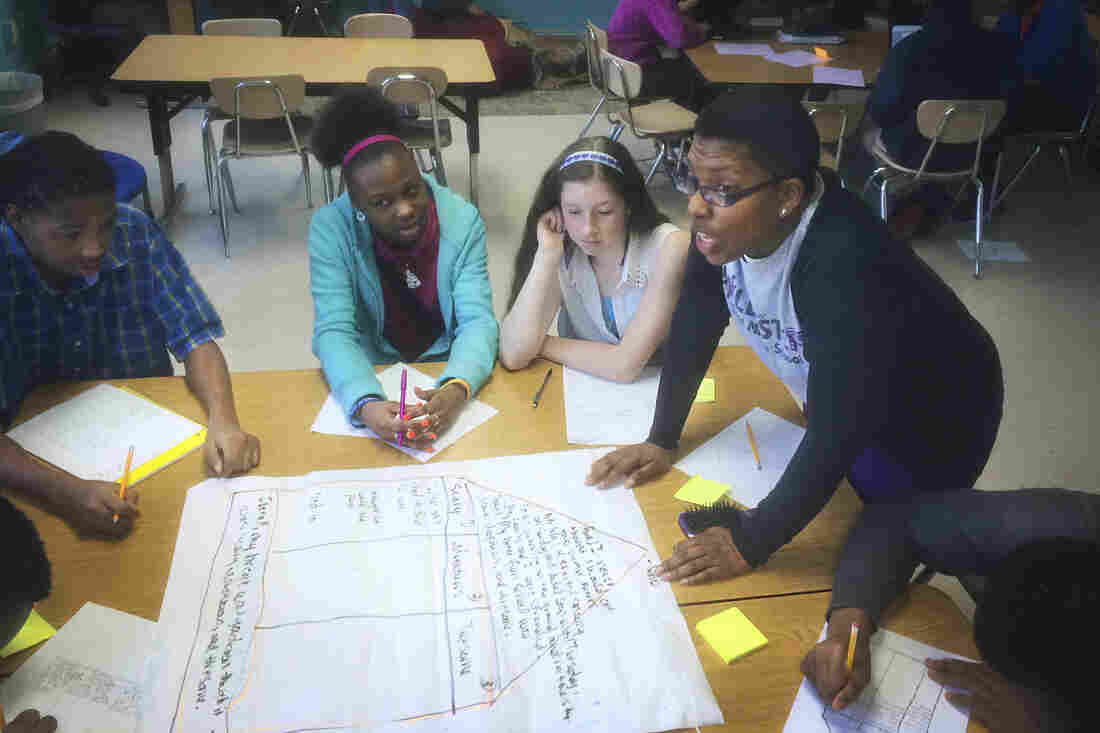 At Nashville's Bailey Middle Prep, Whitney Bradley teaches her 8th-graders how to organize an essay in preparation for the writing section of Tennessee's standardized test. Most in her class trail their peers in literacy. Blake Farmer/Nashville Public Radio hide caption 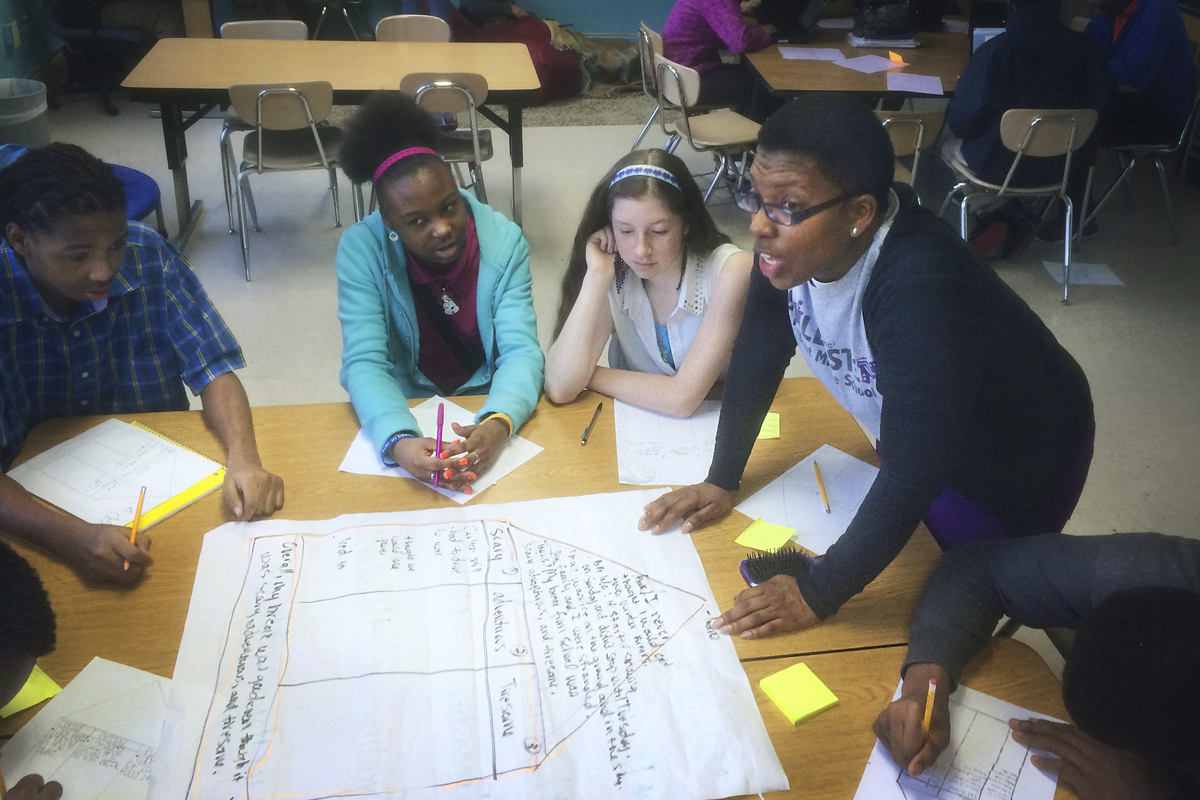 At Nashville's Bailey Middle Prep, Whitney Bradley teaches her 8th-graders how to organize an essay in preparation for the writing section of Tennessee's standardized test. Most in her class trail their peers in literacy.

A stack of research suggests that all the classroom technology in the world can't compare to the power of a great teacher. And, since we haven't yet figured out how to clone our best teachers, a few schools around the country are trying something like it: Stretching them across multiple classrooms.

"We'll probably never fill up every single classroom with one of those teachers," says Bryan Hassel, founder of Charlotte-based education consulting firm Public Impact. But, he says, it's important to ask: "How can we change the way schools work so that the great teachers we do have can reach more of the students, maybe even all of them?"

Public Impact is working with schools in Tennessee, North Carolina and New York to build what it calls an "opportunity culture" for teachers. It's part of a broader turnaround strategy at schools like Bailey Middle Prep in Nashville.

Bailey sits tucked into the gentrifying neighborhoods of East Nashville, but its test scores rank among the worst in Tennessee. Many students here are behind, and it's up to top-notch teachers like Whitney Bradley to close the gap. 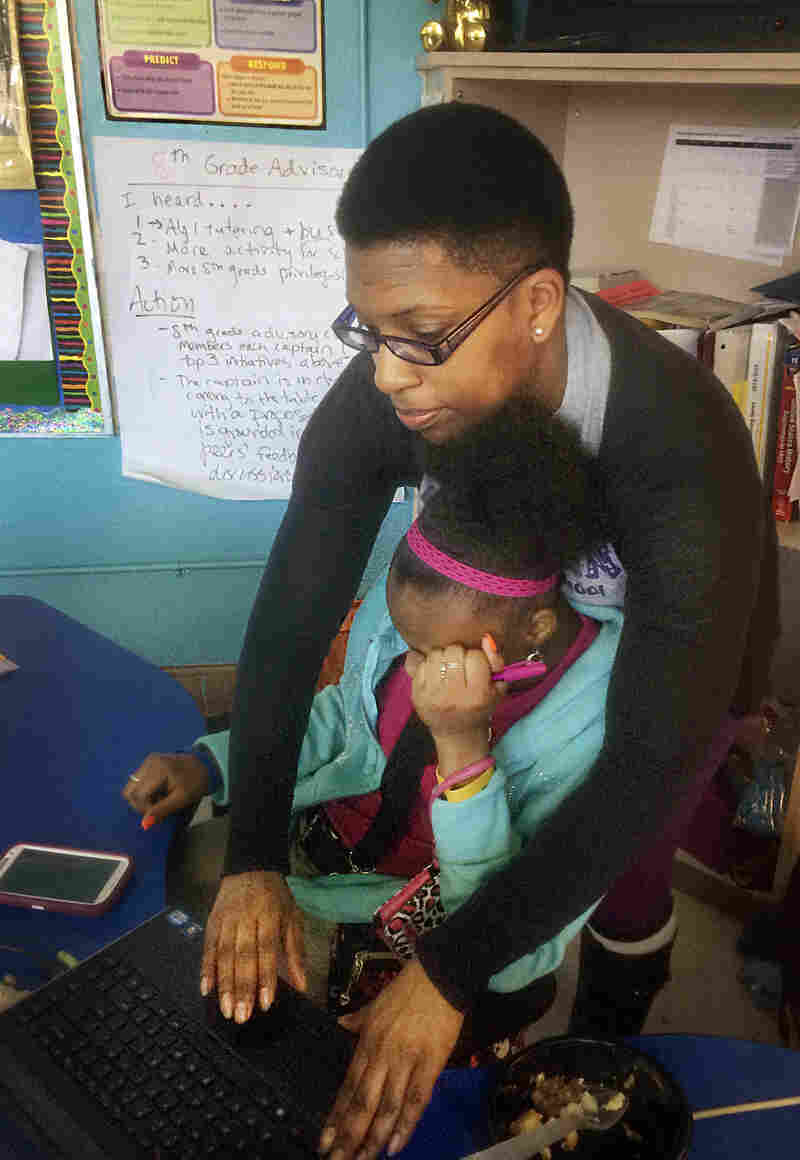 As a multi-classroom teacher, Whitney Bradley juggles instruction and helping the teachers on her team. Ultimately, her evaluation depends on the performance of her students and those of her team members. Blake Farmer/Nashville Public Radio hide caption 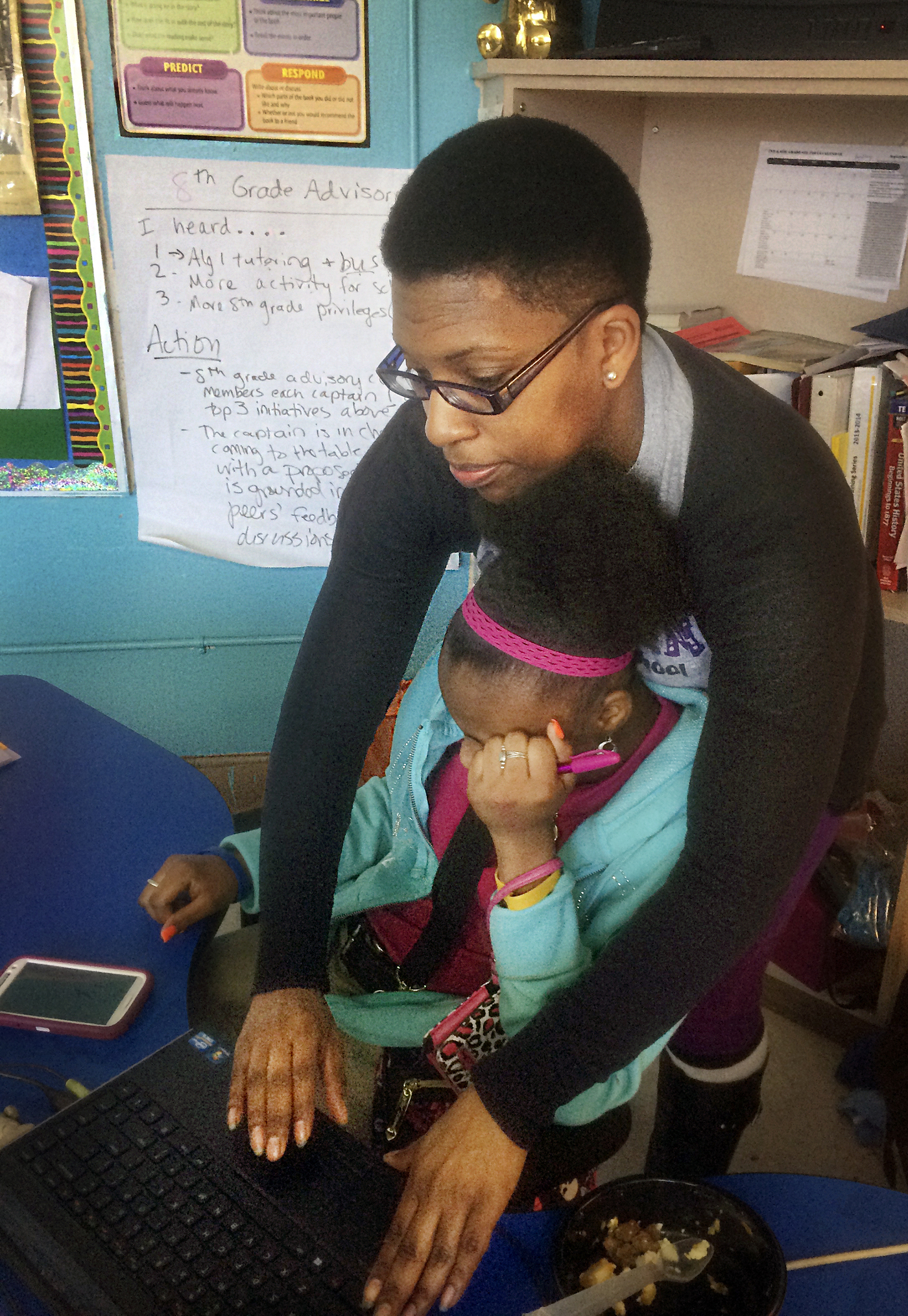 As a multi-classroom teacher, Whitney Bradley juggles instruction and helping the teachers on her team. Ultimately, her evaluation depends on the performance of her students and those of her team members.

"That is awful," says Bradley, pinching her nose while spraying a can of air freshener. "They're the most flatulent group of children."

One of Bradley's 8th-graders has passed gas, setting off a classic, middle-school moment of chaos and laughter.

Bradley — as she's known to students and colleagues alike — isn't afraid to get silly with her kids, and they love her for it. That's one reason she's in the running for Tennessee's Teacher of the Year. Another reason: She knows when to get serious.

"Let's face it," she tells the class just minutes later, "we've got six weeks and one spring break before TCAP."

When prepping her students for the state's writing test, she doesn't rush in headlong but eases them into the material with a journaling exercise. Why?

"For struggling readers and writers, they may not know a lot about Shakespeare. And they might not know about literary allusions, but they know about themselves," she says after explaining to the class how to organize an essay. "It's strategic. They're writing. And they don't really know they're about to crank out an essay."

Bradley's tactics pay off. Her evaluations place her in the top echelon of teachers statewide for student growth. She's the kind of natural leader who's told — and even tempted — to become a principal.

But professor Barbara Stengel of Vanderbilt University's Peabody College says Bradley is precisely the kind of talent schools should bend over backwards to retain as teachers.

"How do we create career paths for teachers, fabulous classroom teachers like Whitney Bradley, so we don't have to make them administrators?" she asks. "They can still be in classrooms."

Stengel advises Bailey Middle in its experiment with multi-classroom instructors. The school hires "lead teachers" to handle their own class while also paying them to oversee a small team of fellow teachers. At Bailey, those teams also include non-certified aides and full-year student teachers from Peabody.

The new hierarchy solves several problems at once, Stengel says. The lead teacher becomes an automatic mentor to the teachers she oversees. The mid-level management position also helps the school justify paying them more while giving teachers something to aspire to that won't take them out of the classroom.

In The Trenches But In Charge

The pay and new title merely formalize what a lot of great educators already do.

Whitney Bradley says mothering and mentoring come naturally for her, even at 28 years old. Her colleagues seek her out for help. Her room is a hub. Teachers duck in with a quick question or ring Bradley's phone every few minutes.

As a multi-classroom instructor, Bradley is like an infantry officer — in the trenches but in charge. Between calls, she teaches lessons that draw in every student. Then she lets her student teacher take over some one-on-one work while she helps a teacher next door with a discipline issue. A boy has a cartoonish, mostly naked woman on his hoody.

"If you wear a shirt that has boobies and bottoms on it again, I'm going to write you a referral, capeesh?" she says. The student nods after the third "capeesh?"

As part of her new role, Bradley is no longer responsible for her classroom alone. Her evaluation now depends on the test scores of her students as well as the scores of students under the teachers she leads.

"The weight of these 100 students is on my shoulders, but I have a team that is strong enough," she says. "They follow me."

Bradley admits it is an "awkward dance" at times. For better or worse, teachers are accustomed to working alone. Now they have a fellow teacher looking over their shoulder.

Ann Marie Dvorak, who is considered an apprentice teacher, jokes that she's one of the "underlings."

"We talk about how we're equals, and we plan like we're equals. And there are times – obviously – when Bradley will have more of a responsibility," Dvorak says. "But honestly, I think the philosophy behind it is so important."

It's too early to tell if this model is genuinely helping students. But for teachers, Dvorak says, the multi-classroom idea makes the job feel more like a profession with room to grow.