Accessibility links
The Value Of Wild, Risky Play: Fire, Mud, Hammers And Nails : NPR Ed A new short documentary on an adventure playground in Wales explores "the nature of play, risk and hazard." 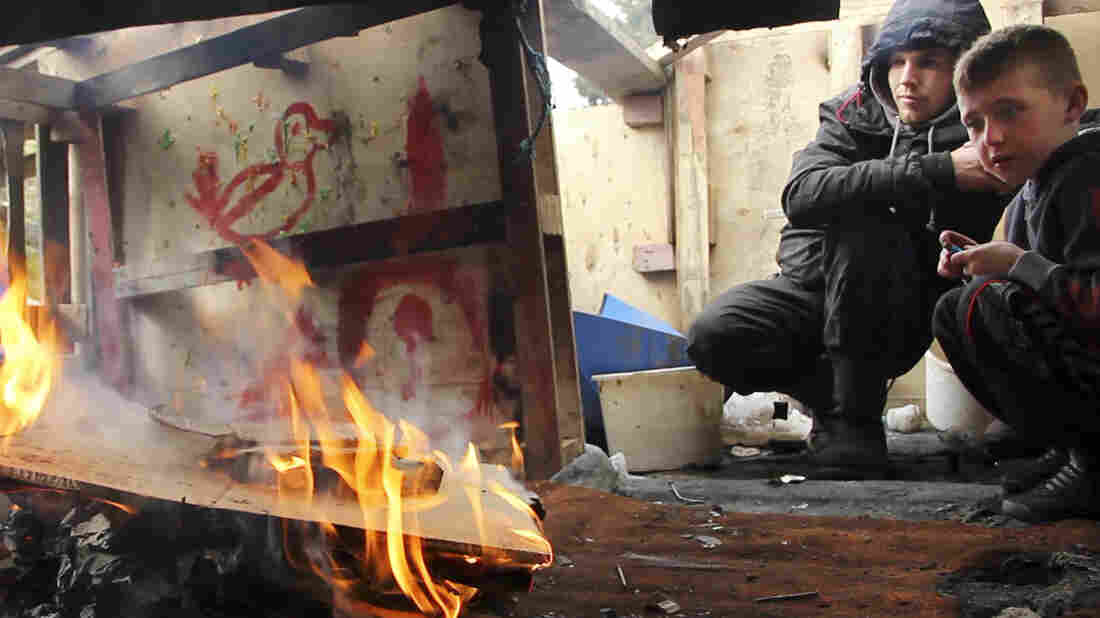 The Land adventure playground is situated in a neighborhood that allows the staff to get to know the children well. Playworker Dave Bullough supervises a fire that Corey has built. Courtesy of Erin Davis hide caption 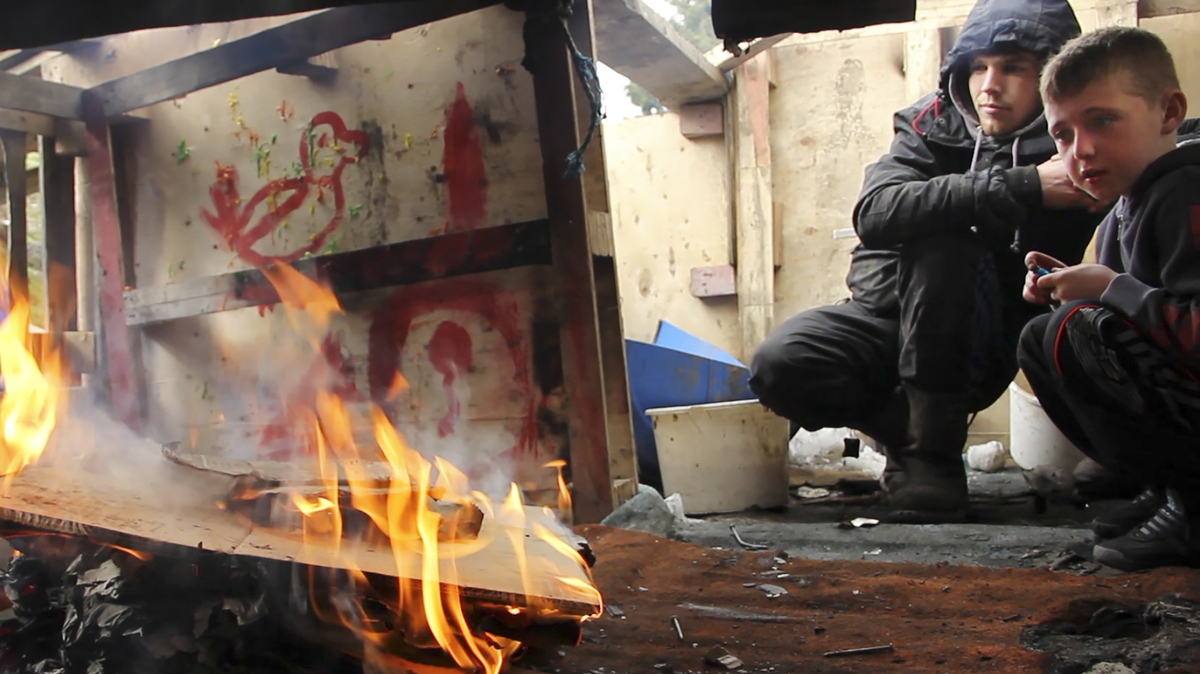 The Land adventure playground is situated in a neighborhood that allows the staff to get to know the children well. Playworker Dave Bullough supervises a fire that Corey has built.

Filmmaker and radio producer Erin Davis' new short documentary shares its name with an adventure playground in North Wales called The Land. As Davis puts it, the film explores the "nature of play, risk and hazard" — issues I explored last summer in a story on the decline and fall of wild play.

At The Land, children start fires, swing from trees and play with saws, hammers and nails. Davis' film offers the chance to examine why it's important for kids to wave their wild-play flags high.

Davis spoke with me about the Welsh playground. As she puts it, The Land is "a play space rooted in the belief that kids are empowered when they learn to manage risks on their own." Trained staff keep a watchful yet unobtrusive eye on the fun, and they step in only when they must.

There are dozens of these adventure-style playgrounds across the U.K. and Europe, but really only a few in the U.S. And some of those are not open year-round. We can't blame it all on the lawyers. What's your take on why there are so few?

I think people just don't know this is real, that it exists, that it's possible. I don't think people have a model for these kinds of adventure playgrounds. That's what I'm hoping the film will do — is give people a look through the keyhole to this world that has a wide variety of models for play environments for children.

At the adventure playgrounds I've been to, kids are having a blast: They're rolling down hills, riding the zip line, using hammers and nails. They're gettin' muddy. For kids, anyway, there seems to be a real hunger for more of these.

My feeling is that kids now are the same as they ever were, and have been throughout time. Kids are drawn to the same kinds of things: They climb things, they hide in things, they create dens and places to hide in, create hierarchies and worlds of their own. They're drawn to fire, they're super-imaginative. What's different [today] is the degree to which they have an opportunity to express and pursue these interests. So it's surprising to us — but really it shouldn't be — that kids thrive in these environments when they can do really whatever they want. They have the play drive. It's up to us to kind of provide the kinds of opportunities for them to really follow through on it.

And maybe it's up to their parents, too, to help them follow through?

Maybe. What I really learned from The Land is the value and practice of playwork. A playworker is an adult who works in an adventure playground with particular training on how to support children in their play. I think for parents who take an interest in playwork there are a lot of lessons, takeaways from playworkers. But I don't really think of it as a parenting issue per se, I think it's something bigger than that.

Well bigger than that, sure. What does it say about contemporary American culture and zeitgeist that we are, in effect, sheltering our kids from potential harm a lot more than other industrialized nations?

Something that's hard for us to accept is that safety, security, is a myth to a degree. There's no such thing as complete safety; it's impossible, unfortunately. But we are interested in being as safe as possible. So that is reflected very obviously in children's culture in America these days. Certainly fear culture is a barrier to adventure play in the U.S. But my sense is that people are growing bored of that. [They are] exhausted by worrying about everything all the time, constantly trying to preempt disaster and enjoying the permission to let go that comes from this adventure play movement. 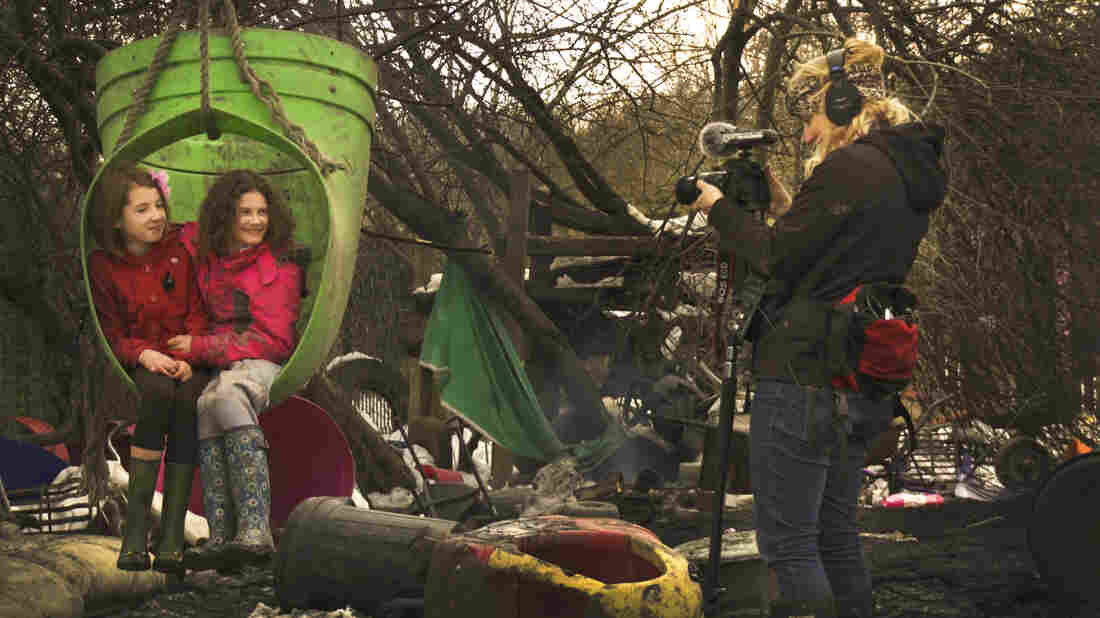 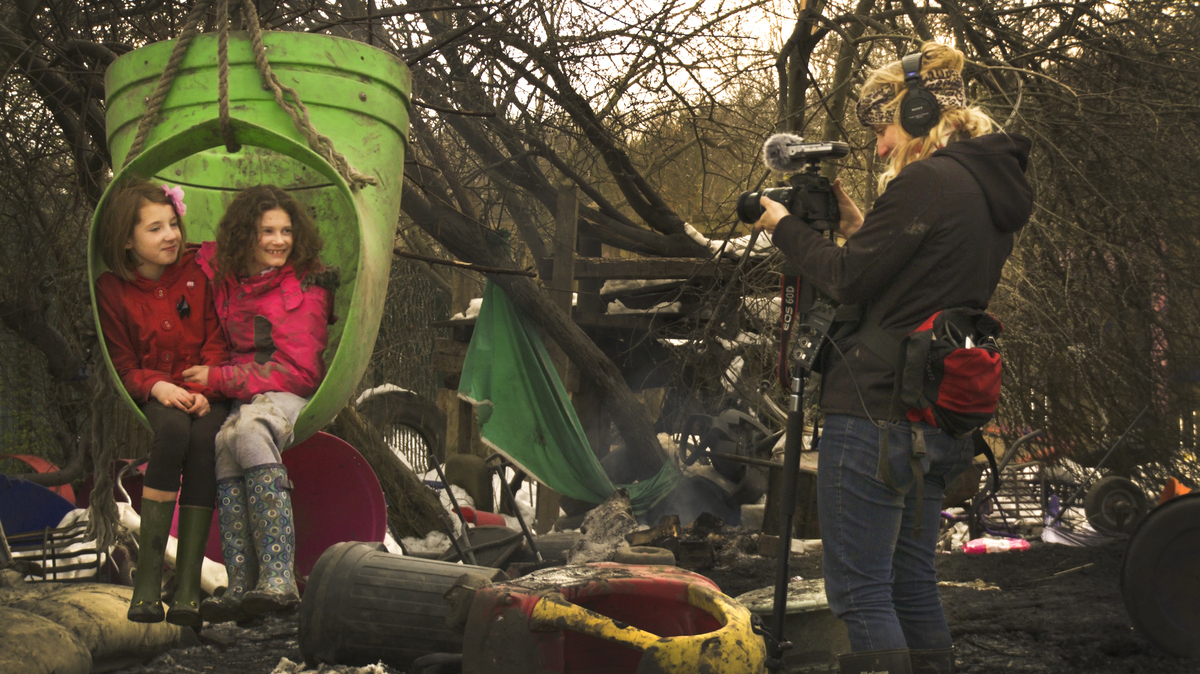 So you think that [fear culture] is changing in the U.S. today?

I don't know if it's changing. All I know is that when people see The Land and they see children playing the way they remember playing, people have an instinctual reaction, they are like, 'Yes this, this is what it should look like!' Whether that means we are letting go of the reins, I don't know, but intuitively people get it.

We found that in the reaction to our play series a lot of parents and educators said, "Wow! We need more of this. This is like what we had when we were kids." It wasn't just banal nostalgia, in my view. It was a sense that we've taken it too far with the padded playgrounds and helicopter parenting.

Children are an indicator species, in a way. And if kids are stressed out and confined and constrained, they're living in the world we created for them. So really this should really be an opportunity for us to look at ourselves and what we're doing in a larger cultural capacity.

It's still weird to me that we just don't have more of these in the U.S.

Another serious barrier is the ugly factor. Junk playgrounds are junky and they don't look cute. They aren't tidy. So for that reason it's a tough sell — even to people who easily get on board with the self-directed and risky play ideas. Of course, that's where the fence comes in. The Land is surrounded by an 8-foot privacy fence that protects neighbors from an eyesore while enabling kids their own independent experiences — playful ones like we remember fondly from our own childhoods.

I've been to adventure playgrounds in Germany and California, and your film makes clear there's a lot more fire, mud and water in Euro land. I think it shocks a lot of American parents to think, "Oh my goodness, they're playing with fire." But if they're supervised by a parent, guardian or playworker you're letting kids explore those boundaries.

They're going to do it anyway. I hate to talk like that. But when I played with fire as a child, my parents weren't there. It was me and my friends doing it in the garage, we were unsupervised. The Land, as much as they can, tries to create an environment where the kids feel like they are alone, that they are not surrounded and supervised by adults, but the adults are there.

For the record, as a kid I liked playing with fire, within reason. A good number of model airplanes and ships went up in flames. And I didn't turn out to be a serial arsonist! I can't speak for my brother.

[Laughs] Everybody loves fire! We played with fire too. We melted candles on our side porch for hours and made a mess I'm sure. Fire is amazing, beautiful and warm. It has historically brought people together. It's where you come to make food and sing and tell stories. At The Land they know that: that children are drawn to fire and that it's captivating.

So they enable an environment where a child can interact with fire safely and engage with it and learn about it on their own terms. So a lot of kids at The Land stand back when they first come, they have a long stick and they light the very end and blow it out immediately. The next time they'll get a little closer and warm their hands. It's a really gradual, natural, intuitive process. It's beautiful to watch.

Besides viewing your film or setting fires, what do you think it would take to get more parents and city playgrounds to embrace these more wild, go-crazy, saw, paint, water and mud playgrounds?

I have a great playworker friend who says, "We don't go from zero to chainsaw." I think when people see the adventure playgrounds in Europe they say, "Oh my God! We have to install a fire pit and we have to go to Home Depot and buy a bunch of saws so kids can hammer and build stuff!" But what's really happening at the heart of The Land is child-directed play and loose parts. So kids have time, space and stuff. I think the very first baby steps we can do is provide kids with loose parts that are simple, and follow their lead in what they are interested in. At your front yard, your street party at your public playground — bring out cardboard boxes, tape, fabric, just crap from your garage. If you can create a pop-up adventure playground, that is the first step in nurturing a playful, kid-friendly community.

All right, parents, turn your side yard or lot into a mini adventure playground!

It's easier than you think to do! And I think it's important to really follow the child's lead. The biggest thing that has changed about my own behavior after visiting The Land is I bite my tongue a lot more and I keep my hands in my pocket a lot more. I really hold back unless I'm specifically invited into the game or am asked for help.

Davis adds that the group Pop Up Adventure Play offers free resources for parents and educators as well as playwork trainings (not free) for educators and others looking for a deeper dive. The Alliance for Childhood has the Playwork Primer.