Accessibility links
A Classic Prep For Parenthood, But Is The Egg All It's Cracked Up To Be? : NPR Ed It's a rite of passage for teens in sex ed: simulating parenthood by caring for a fragile, or fussy, surrogate — sometimes even an egg. But do egg babies really teach kids the hardships of parenting?

For the series Tools of the Trade we've been thinking a lot about the iconic tools that some of us remember using — if only for a short time — in our early schooling. Things like the slide rule and protractor, Presidential Fitness Test and Bunsen burner. 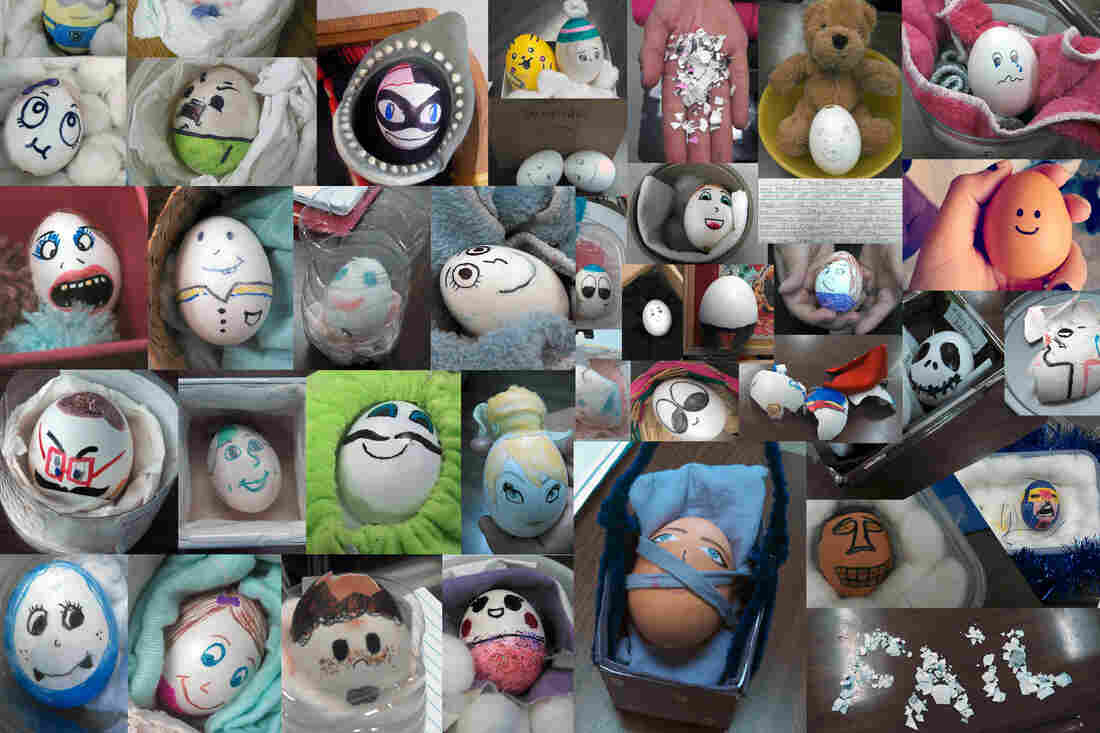 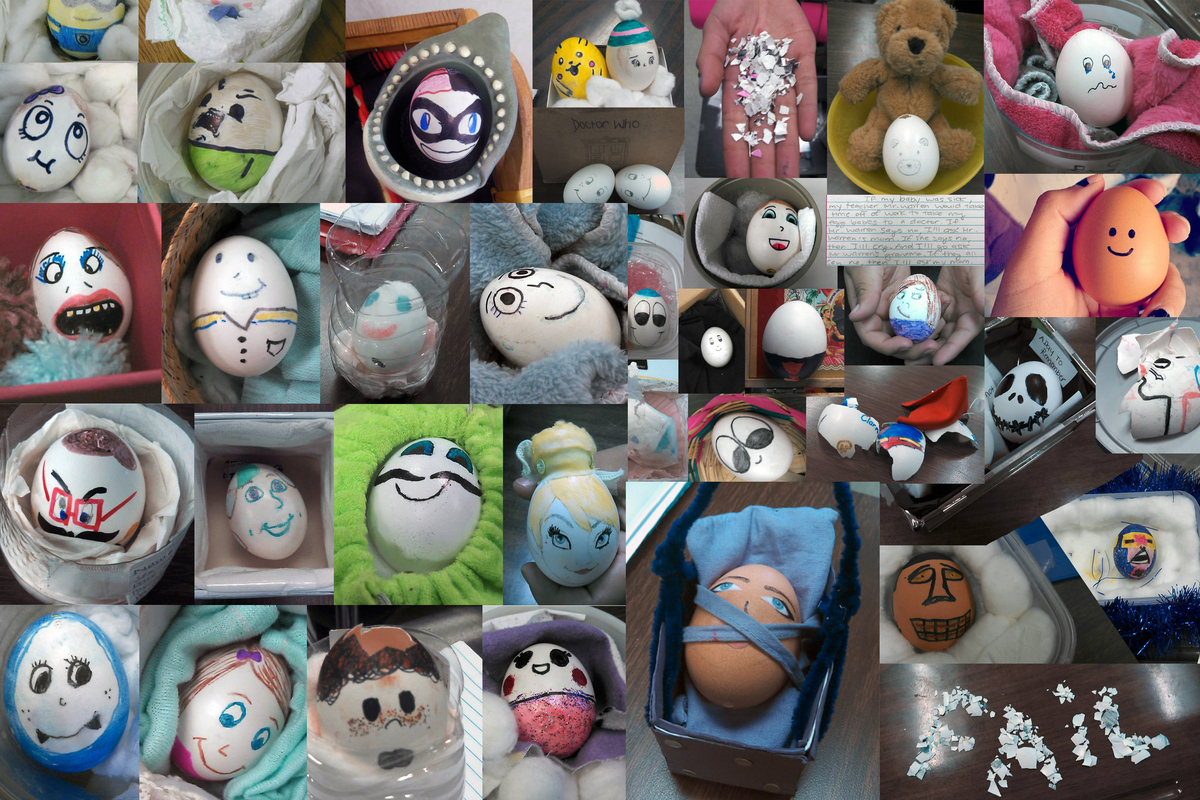 One afternoon last fall, my 16-year-old sister, Veronica, stomped into the kitchen of our childhood home in St. Louis. Visibly exhausted, she complained about her sleepless night and her fussy newborn. Yes — my sister had recently been introduced to some of the challenges of teen motherhood. But only for a weekend.

"I have [taped] it up, put it back together with white out, carried it around safely, and some dumb little mistake [occurs], BOOM! It cracks, EVERYWHERE!"

Veronica became the (not so) proud mother of an infant simulator doll as part of her health class. She had to feed him, change his diaper and comfort him. The baby tracked and recorded each of her parental responses on an internal computer that her teacher then used to determine her grade.

"It was terrible. I got no sleep that weekend," she told me last week. "When anyone but me touched him, he cried. When he was hungry, he cried. I literally couldn't leave him for 10 minutes without him needing something."

As a way to show the difficulties of parenting, variations of this assignment have become a classic rite of passage for teens across the country. Long before the days of simulator dolls, students used all sorts of low-tech infants made of things like flour or sugar bags and, perhaps most famously, eggs.

So where did this idea come from, and does it actually work?

It's difficult to pinpoint the origins of the egg baby project.

A 1986 story in the Philadelphia Inquirer about the organization Education for Parenting appears to be the idea's first media reference. The Philadelphia-based nonprofit originally used egg babies at local schools to teach kids compassion and responsibility.

"I think it is crazy that you have to make money in a certain amount of time to raise your child and that it takes a lot to actually raise a baby."

"Parenting is about real hard work. It's about nurturing and caring and about responsibility," Kulick says. "We've seen kids suffering from antisocial behaviors who are just drawn to that baby. The kids are just engaged."

Though Kulick can't definitively say her organization started the egg baby trend, it has since become a popular tool in schools throughout the country. And while the program in Philly doesn't specifically seek to tackle teen pregnancy, many other infant simulation projects in schools today do.

National efforts to address teen pregnancy began after teen birthrates increased by more than 60 percent between 1940 and 1960, according to the Centers for Disease Control and Prevention. What was more alarming to the public, however, was the number of unwed teen mothers, says sociologist Frank F. Furstenberg of the University of Pennsylvania.

"Marriage kind of covered up the issue before the middle '60s, but that cover was pulled back because marriage was deemed to be quite risky," Furstenberg says. "Mothers began to say to their daughters: 'Finish school. Don't get married.' "

After a steady decrease in teen birthrates over the next 20 years, concern re-emerged when the rates surged again between 1988 and 1991. Many American schools soon required sex education as part of their curricula. Today teachers continue to use baby simulation projects for both science and sex ed topics. 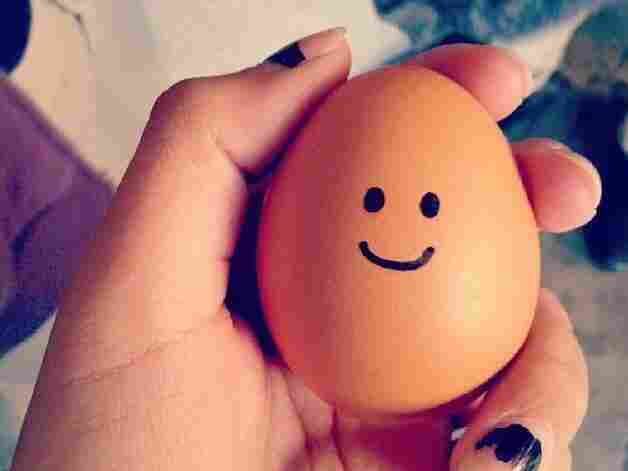 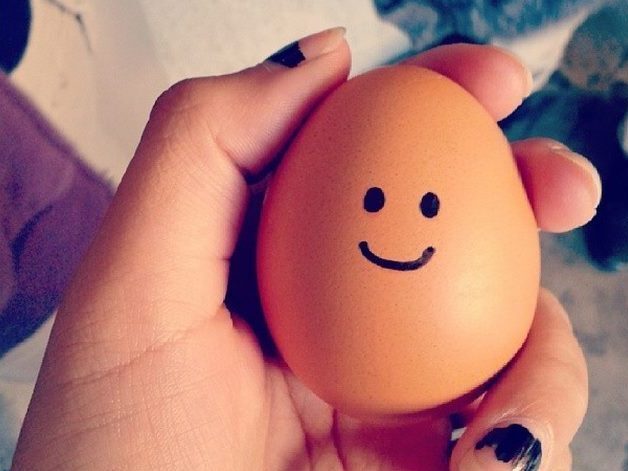 Aaron Warren teaches ninth-grade health and genetics at Orthopaedic Hospital Medical Magnet High School in Los Angeles. Warren remembered doing the project in his own middle school and thought it would be a good addition to his class.

Warren's students decorate and care for a hollow eggshell baby for two weeks. Not all the babies survive, Warren says. In fact, he estimates about half of the eggs suffer untimely deaths within the first week.

He expects them to build the baby a suitable container, carry it wherever they go and write about their experiences. Warren's journal prompts are also meant to facilitate discussion about the topic between the students and their parents.

Warren receives the occasional complaint about the difficulty of the project, but the majority of his students enjoy and take ownership of the challenge, he says.

So does the egg baby project work? We don't really know.

Studies into baby simulations don't look at eggs specifically, but researchers have studied the effects of advanced infant simulators — specifically the RealCare baby program, formerly known as Baby Think It Over. Wisconsin-based Realityworks developed the RealCare dolls to teach a variety of sex education topics including the stages of pregnancy and the effects of drug use on infant development.

The dolls were crafted to look, feel, act and even smell like actual infants, says company CEO Timmothy Boettcher. They respond to and track feedings, diaper changes, comfort, neglect and abuse.

Overall, reports find that participants in simulation programs demonstrate a better understanding of the responsibilities of parenting. But simulator dolls are not financially practical for every school — costs for RealCare babies start at $649 each.

The way teachers use the baby simulations are much more important than their sophistication, says Monica Rodriguez, president and CEO of Sexuality Information and Education Council of the U.S.

"Don't get me wrong, I'm not knocking it," Rodriguez says. "But I think we can't delude ourselves into thinking that one limited interaction can address the bigger, larger societal factors that contribute to teen pregnancy rates."

Comprehensive sex education, one that informs teens of the contraception and health services available to them, is key, she says.

Teacher Warren expresses similar views. He doesn't attempt to solve the complicated issues of teen sex and pregnancy with one assignment. Rather, he says his egg baby project gives students context for difficult concepts.

What about the egg baby project's original intent: to teach children to be more nurturing and careful?

Marcy Thomaswick, who teaches a sixth-grade class in life cycle studies at Ezra Academy in Connecticut, leaves out conversations about teen pregnancy from her egg baby lesson.

After parenting an egg for one day, Thomaswick's students walk away with an appreciation for the "fragility of life" and the value of helping others, she says.

"It's about teaching them to think about things besides themselves," Thomaswick says. "It's just one of those assignments that really sticks with them. They remember how hard it is and the amount of care and responsibility involved."