Accessibility links
It All Came Down To 'Nunatak' : NPR Ed The Scripps National Spelling Bee had drama, excitement and a lot of really hard words. 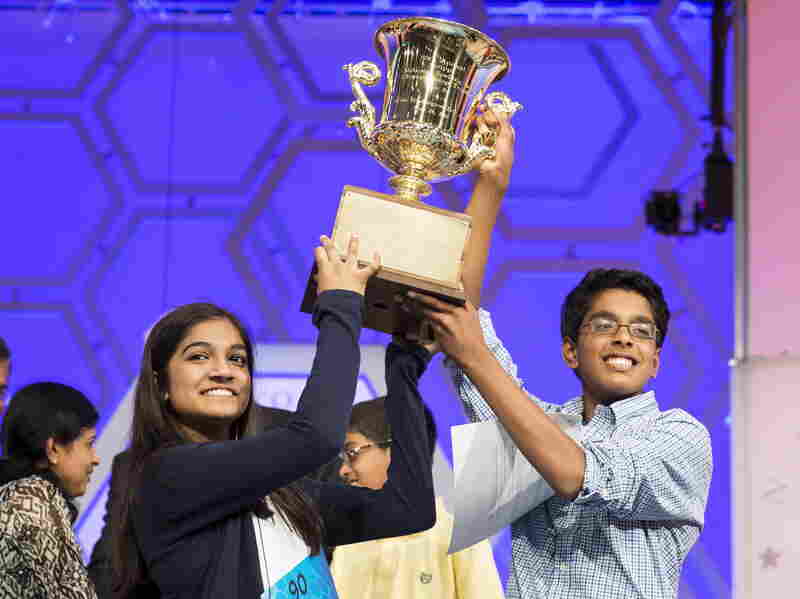 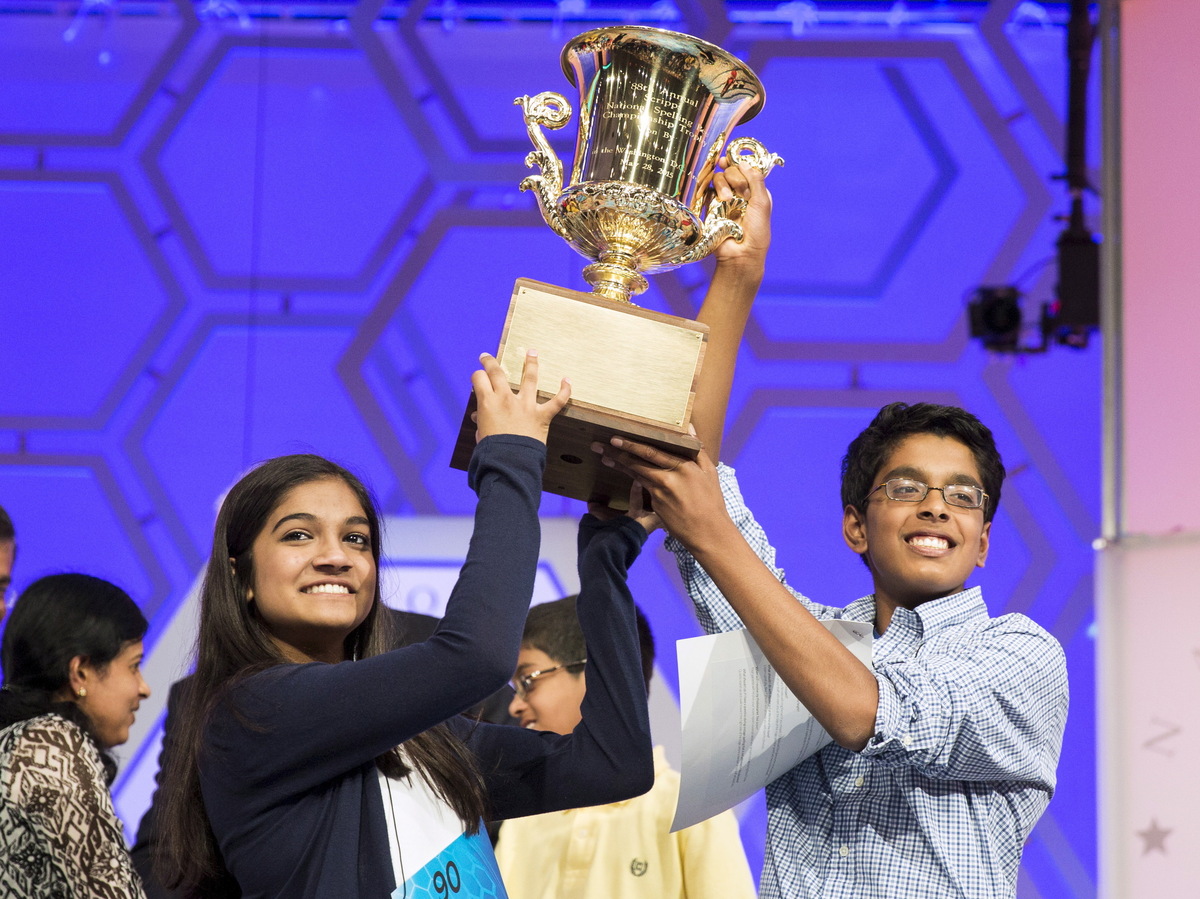 Vanya Shivashankar (left) of Olathe, Kan., and Gokul Venkatachalam of Chesterfield, Mo., lift the trophy after becoming co-champions Thursday night after the final round of the 88th annual Scripps National Spelling Bee at National Harbor in Maryland.

I started off wondering whether I might be able to spell a few of the words right. I ended up realizing that most of them I had never even heard of before.

It was one of the many surprises of an evening spent watching the finals of the Scripps National Spelling Bee on Thursday night near Washington.

Another big surprise was how much I thoroughly enjoyed it.

I had expected to see a bunch of highly trained kids who've spent months and years memorizing the dictionary, essentially regurgitating that information.

Instead what I saw felt much more like a celebration of language and learning. An evening that showed these 13- and 14-year-olds — some younger — displaying deep knowledge of word origins, analyzing Latin and Greek roots, even Sanskrit.

"Does this come from the Greek word 'stome' meaning 'to have a mouth,' " asked 13-year-old Dev Jaiswal of Louisville, Miss., after he was given the word "gnathostome."

The definitions alone were fascinating: Tartarean, of Latin and Greek origin: "of, or relating to, the infernal regions of ancient mythology, in other words relating to or inhabiting hell."

There was a word from the Cree language of North America, another of Fijian origin.

The other surprise was how far spelling bees have come from the wooden, nerdy presentations when I was a kid. ESPN and Scripps have turned it into a slick and entertaining evening, and they've learned how to showcase the often charming personalities of the young participants.

I kept thinking how much it reminded me of the Little League World Series — another decades-old event that used to warrant nothing more than a few paragraphs in the newspaper ... until TV discovered it.

Now it's a huge summer spectacle, seen by millions of people every year. Watching 12- and 13-year-olds play a grown-up sport with a high level of skill is pleasing in itself, but what I think has made it so immensely appealing is the raw, unscripted emotion of the athletes.

In the Major Leagues, a player who drops a fly ball or serves up a home run may kick the dirt, or be seen, briefly, cursing himself. But to see a preadolescent outfielder throw down his glove and break into tears, or a coach run from the dugout to console a sobbing young pitcher, is truly moving.

It was much the same at the Spelling Bee. It broke my heart each time one of these talented and trained young people realized he or she was halfway into a word and didn't know how to get out of it. One almost cried. There was an audible and genuine "awww" from the crowd each time the bell dinged a young contestant off the stage.

Emotional, entertaining, and yes a little worrying. As with the Little League World Series, putting all this on television puts a lot of pressure on these young people and you can't help wondering whether some of them are ready for it.

At the same time, to see the amazing composure of the night's eventual co-champions: Vanya Shivashankar, 13, of Olathe, Kan., and Gokul Venkatachalam, 14, of Chesterfield, Mo., as they confidently swatted words like "pipsissewa" and "scherenschnitte" over the fences was, no question, inspiring.

So, too, was watching little kids scurrying around with autograph books to get the signatures of these young spelling superstars.

My favorite moment of the evening came after the event was over. Earlier, as the bee was about to start, the producers had called on past winners to come up to the stage.

Then at the end, as the crowd filed out of the auditorium, I recognized the 1965 winner, Michael Kerpan Jr. of Tulsa, Okla., (winning word back then? "eczema"). A couple of kids had recognized him, too, and asked him to sign their autograph books.

Balding, gray-haired now, a little stooped, he stopped, smiled and graciously obliged. They asked him how this night compared with his spelling bee. He grinned and told them, "I wouldn't have won this year."