Accessibility links
5 Ideas To Ease The Burden Of Student Loans : NPR Ed Presidential candidates are writing their plans now. We talk with the experts about some of the policy options on the table. 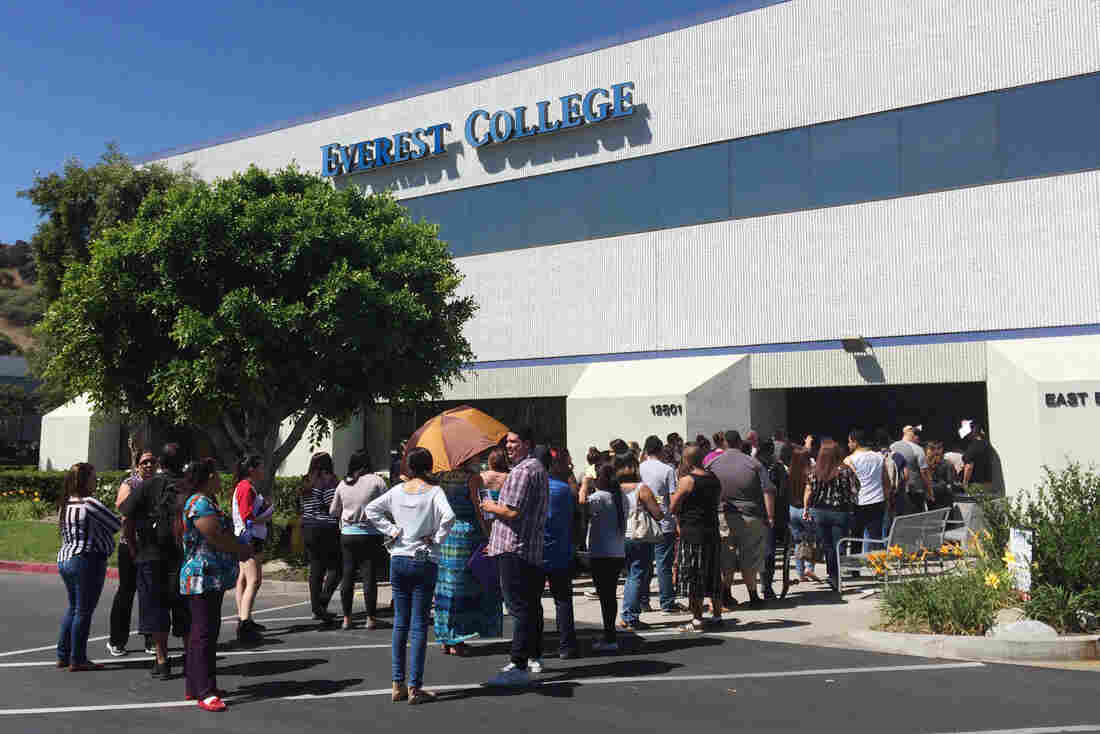 Students wait outside Everest College in Industry, Calif., hoping to get their transcriptions and information on loan forgiveness and transferring credits to other schools. In April, the school was one of the last Corinthian Colleges campuses to close. Christine Armario/AP hide caption 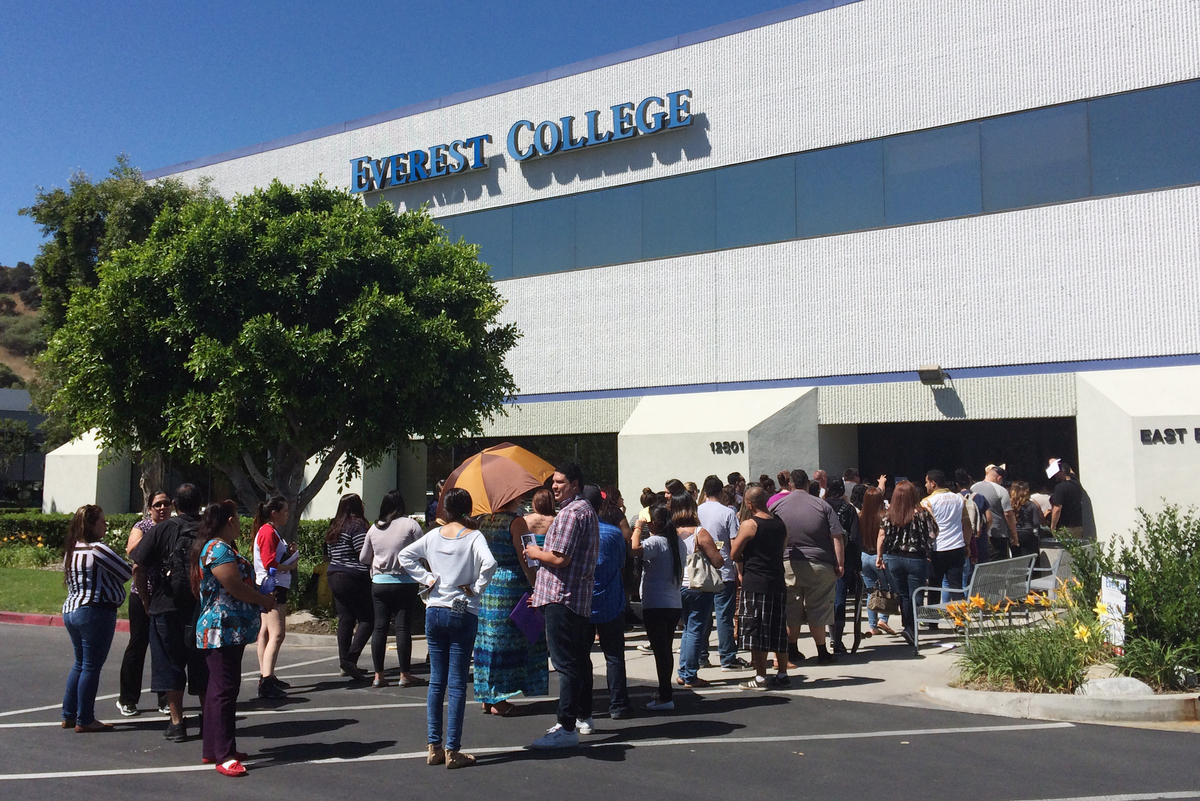 Students wait outside Everest College in Industry, Calif., hoping to get their transcriptions and information on loan forgiveness and transferring credits to other schools. In April, the school was one of the last Corinthian Colleges campuses to close.

Whether it's because of for-profit colleges shutting down or popular debates about the moral necessity of repayment, the issue consistently makes headlines, and it shows signs of emerging into political prominence during this election cycle. Sen. Elizabeth Warren, D-Mass., made news recently when she spoke out about creating a debt-free option at public institutions.

Lauren Asher, the president of The Institute for College Access and Success, says that all this interest is a big change from a decade ago.

"There wasn't a term or an awareness of the trend in a broad sense," she says. 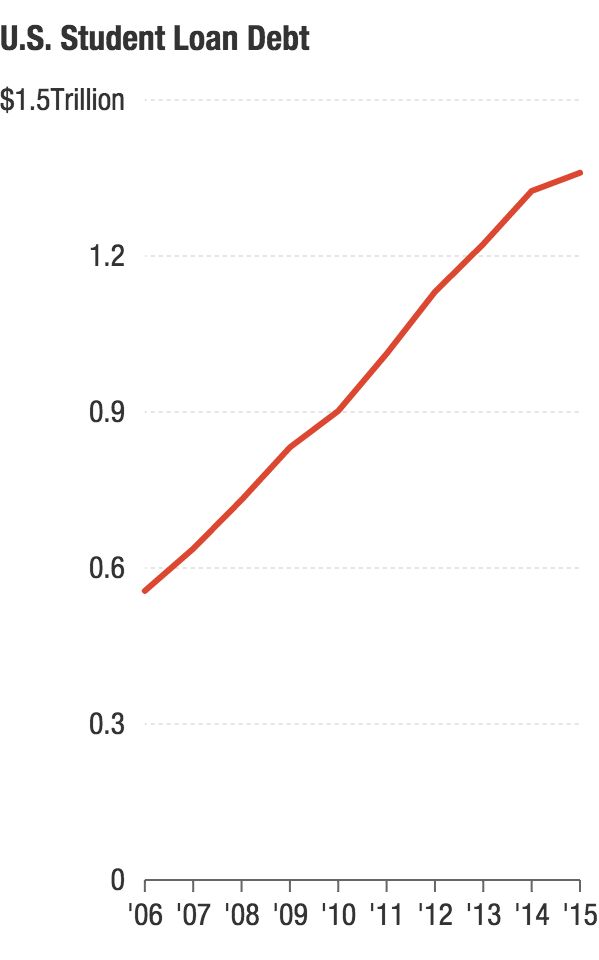 Total U.S. student loan debt increase, in trillions of dollars, as of the end of the first quarter in 2015. (Data: Federal Reserve Bank of the United States.) LA Johnson/NPR hide caption

Over the past 10 years, the nonprofit, nonpartisan organization's Project on Student Debt has been laser-focused on this issue. Their first big campaign, backed by a broad range of student and education groups, was to introduce income-based repayment for loans, a proposal adopted by the Obama administration and passed into law in 2007.

Asher's group isn't the only policy shop that recognizes that student debt is having a moment.

"All the major Democratic candidates have committed to pushing for debt-free higher ed," observes Robert Hiltonsmith, a senior policy analyst at Demos, a progressive think tank based in New York. "I think that just reflects both, first, the efforts of a lot of groups to bring the issue to the fore, and the students themselves who have become increasingly vocal about a huge economic issue."

The nation's reliance on loans as a means of financing education has grown inexorably in the past decade. And that, says Asher, is more by happenstance than design.

"This was not a result of a conscious top-down decision, in the way that the U.K. or Australia or New Zealand changed from a tuition-free system to one heavily financed by student loans," she says. "This instead, in the U.S., was a shift over a generation."

The primary driver of that shift? A dramatic erosion of support for higher education at the state level.

The consequences, meanwhile, of the United States' reliance on student loans have been abundantly demonstrated by researchers. People with debt have a harder time leaving the family nest, buying homes, starting businesses and saving for retirement, all of which creates a negative headwind for the economy at large.

They are much less likely to be thriving in all aspects of their lives, including health and mental health. And the system is inequitable:

"Low-income students are the most likely to have loans, and when they graduate they owe more than anyone else," Asher points out.

So, what solutions are politicians supporting? And what should they be supporting?

Asher says that, with the reauthorization of the Higher Education Act on the horizon, "Congress should be looking at the whole student loan program soup to nuts."

I spoke with both of these experts, plus Beth Akers of the Brookings Institution, and pulled out five top recommendations to make college more affordable and reduce the societal impact of student loans.

States need to act. "States have a critical role to play in reducing the need to borrow," Asher says. "To rein it in, we need more investment and more need-based grant aid, so that those who can least afford to are not being forced to take the most risk."

Demos, where Hiltonsmith works, has been engaged in conversations with both Clinton's and Sanders' campaigns to flesh out what a debt-free higher ed proposal might look like. This could include tying federal student aid — and possibly other federal funds as well — to some kind of mandate that states hit their own funding markers and reduce tuition costs.

But Akers isn't so sure. "Debt-free college is a fantastic branding, because everyone hates debt," she says. "But it's a concern because the more subsidies you put into the system, it won't necessarily lower costs."

Reduce repayment choices. Since 2009, the Department of Education has added several different repayment plans designed to reduce the burden of repayment and the risk of falling into default. There's income-contingent repayment, income-based repayment, Pay As You Earn, or PAYE, and public service loan forgiveness. And that's on top of standard repayment, graduated repayment and extended repayment. All have slightly different terms and qualifications.

Even Asher, who does this every day, gets a bit tangled up trying to explain them to me. "It's confusing for people," she says. "There are too many repayment plans right now. They ought to be streamlined."

But there is hope in the interim, she says. Today, if you go on to studentaid.ed.gov and create an account, you can electronically link your tax return and there is an option for the system to automatically put you into the most affordable plan you qualify for.

Create options for debt relief. Student loans, both federal and private, are currently nondischargeable in bankruptcy under most circumstances. This makes them different from any other kind of consumer debt. It's an issue that's been in the news recently with the shutdown of the for-profit Corinthian Colleges; borrowers are asking to get all of their loans forgiven. "Borrowers need to be able to count on consumer protections: Loans should be discharged if schools are closed or if they're defrauded," says Asher.

Hold colleges accountable. Asher points out that the department's new "gainful employment" rule, which sanctions colleges where too many students can't repay loans, applies to public vocational, technical and training programs as well as for-profits. It goes into effect July 1.

But, she says, there's more that the states and the federal government could do to publicize and sanction colleges of all kinds for practices that contribute to debt. Sanctions could apply, for example, "when students can't get all the courses they need to graduate in four years," which is common at large four-year public institutions, or "when they are lied to about job placements at career education programs, then we're harming them and we're harming taxpayers."

These types of accountability restrictions are particularly popular with conservative groups. The American Enterprise Institute, for example, has called for colleges to be financially on the hook for students who default on their loans.

Beth Akers, however, says that the "purest form of accountability" is transparency: providing information to prospective students to make better decisions. The Department of Education has just said it's releasing a new tool this summer that will do exactly that.

Reduce the profits. Loans are a source of revenue for the federal government, thanks to interest rates and fees. "The federal loan program makes profit. We think that it shouldn't," Asher says. Cutting interest rates on federal loans, which currently range from 4.29 percent to 6.84 percent depending on the type of loan, would clearly save students money. Here, too, Hiltonsmith agrees. "This is a moral issue."

One way to do that would be to allow borrowers unhappy with their terms to refinance and seek a lower interest rate, as with a mortgage refinancing. This idea has had traction recently, but it seems to be fading, Hiltonsmith says. And, says Akers, that might be a good thing, because refinancing is in some sense a regressive policy. It offers the biggest benefits to borrowers with the largest balances.

"Some of my work has shown that people with the largest debt balances tend to be doing really well," Akers says. Think law or medical school graduates with six-figure balances. "The crisis is driven by people who have a little bit of debt and no degree, or who have invested in degrees that don't pay off in the long run."