Accessibility links
For This Transgender Third-Grader, Life As A Boy Is Liberating : NPR Ed For Brooklyn elementary student Q Daily, the first full school year as a "he" made all the difference. 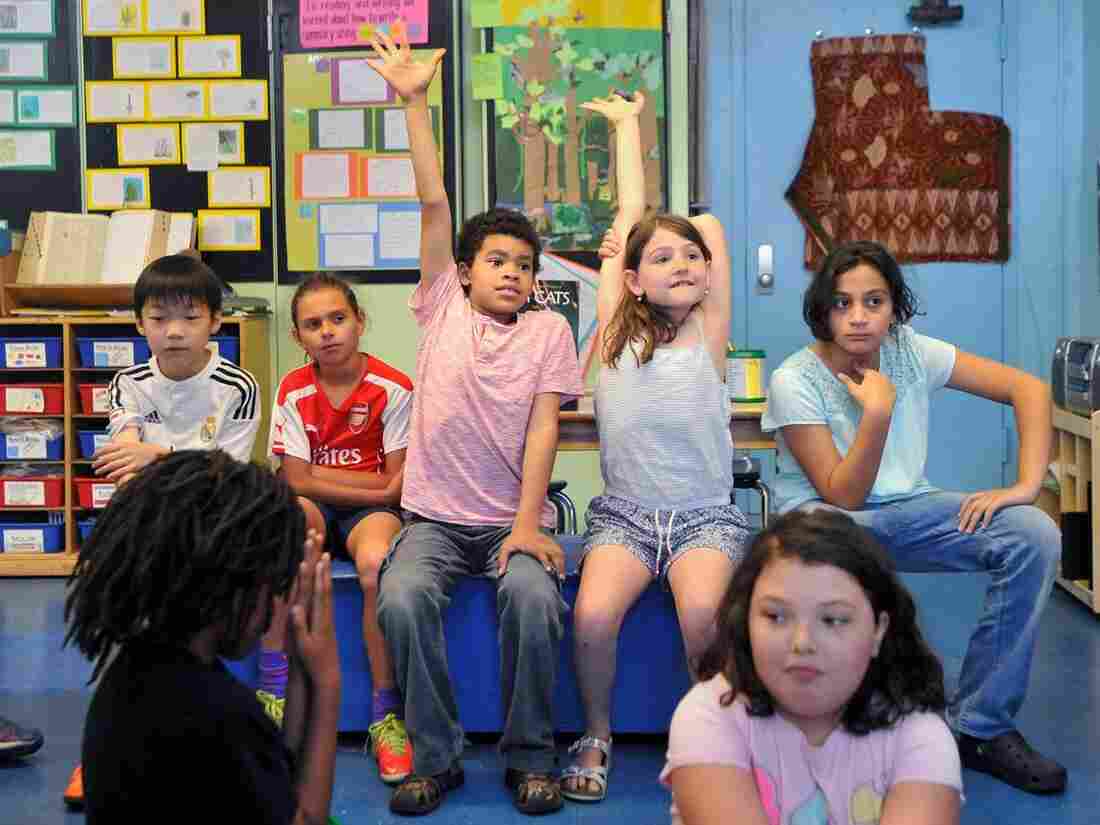 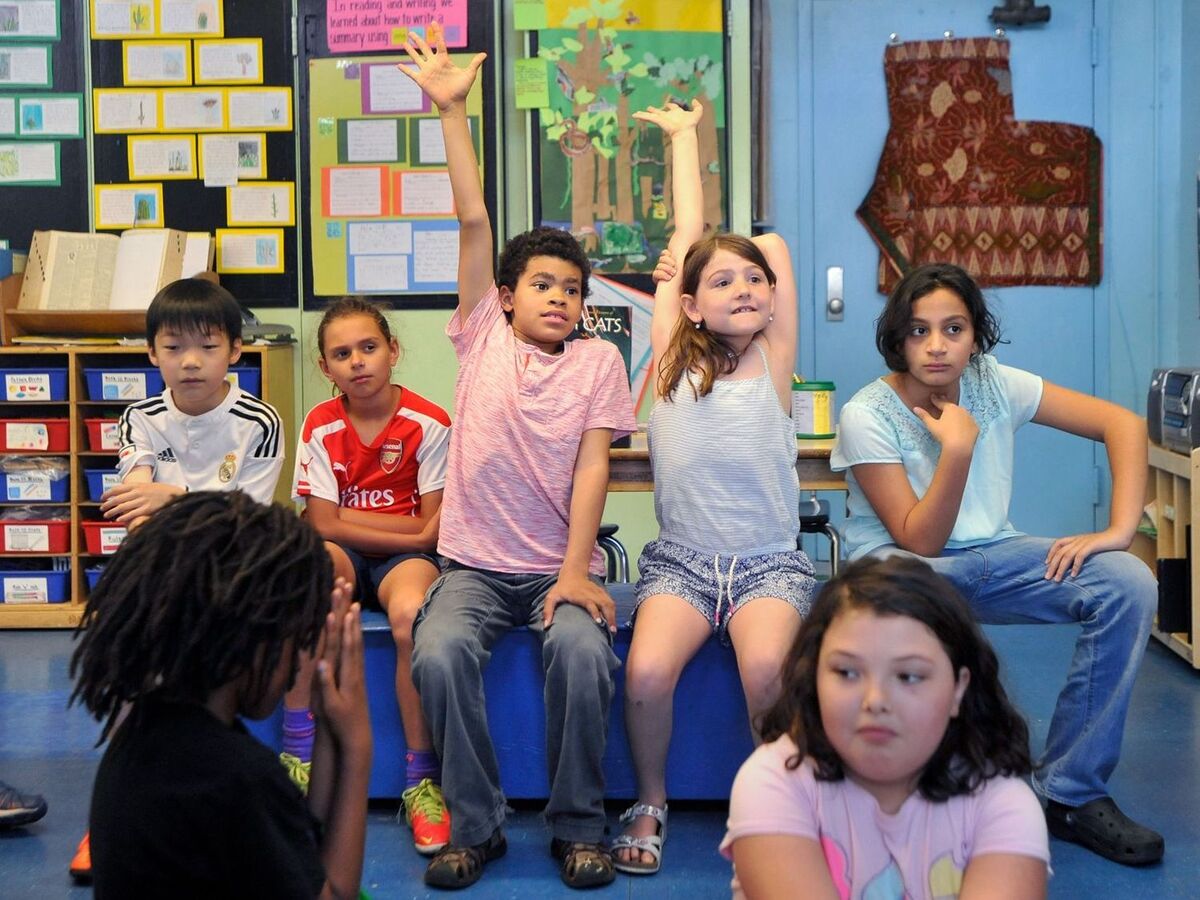 Nine-year-old Q Daily, center, was born a girl, and just finished his first full school year as a boy.

Update: Feb. 23, 2017, we're republishing this story after the Trump administration rescinded Obama administration guidance giving transgender students equal access to bathrooms and other facilities in public schools. This story originally ran in 2015 before any federal clarification.

And to him, that's liberating. Really, he explains, it's everything: "It feels like — instead of a dead flower — a growing flower."

It might be a feeling his peers don't totally understand, but it seems like they really don't care, either.

Billy Griffith is one of Q's closest buddies. They were friends when Q was a girl, too, and they have a lot in common. "We both like Michael Jackson a lot," Billy says. "We're both obsessed with him a lot."

They love to dance, and performed in the school extravaganza two years in a row. They talk. They get along, and Q's transition doesn't affect how they play.

Billy says he probably asked Q at one point why he wanted to be a boy instead of a girl: "I think I forgot what the answer was. I don't know." Billy adds that it doesn't really matter, anyway.

Q transitioned from girl to boy gradually during second grade. That's when he started to dress in boy clothes, dropped his given name, Qwanaia, and wanted to go by "he."

Q's teacher, Katherine Sorel, says the third-grade students have adapted. "Occasionally, there are still kids that will say 'Qwanaia,' " Sorel says. "And still occasionally, they'll say, 'She ... I mean he.' " But it's rare.

The big question at school, though, was the bathroom. Q started using the boys' room on his own in second grade, and says he was told by at least one adult not to.

So Principal Anna Allanbrook did her homework. "And in fact, it is not the place of the school to tell the child which bathroom to use," she says.

Allanbrook learned students should be allowed to use the bathroom of their gender identity. That's backed up by guidelines on transgender students that New York City issued last year. Not all schools in the city follow them; this one does.

The school also tried to follow the lead of Q's parents, who recognize that Q's gender identity is not a whim. They say he began questioning gender going back to age 3 or 4.

Q remembers that his transition started with feelings about his clothes: "I didn't like the dresses, or the pink shirts, or the light blue with the guitar," he recalls. "Or the sparkly stuff."

At first, Q's mom, Francisca Montana, was fascinated by her kid questioning gender stereotypes. "For instance, the color thing — like, purple and blue. I was like, 'Colors are for everybody,' " she says.

But Q kept questioning, so Francisca borrowed some boys' clothes from a friend. And at the end of first grade, Q's dad, Avery Daily, cut Q's hair very short. "It was a new person. A whole light came out," he says.

Avery and Francisca are separated, adapting to Q's gender identity individually. Avery says that, for him, it wasn't easy in the beginning. This was his little girl, and he wondered what people were going to think of him.

"I just thought that people would look at me funny, but I saw that Q had a lot of confidence in what he wanted." So, he accepted the transition.

Francisca really threw herself into the changes, calling Q "he," and researching playgroups for transgender kids in New York City. She's been encouraging, but not everything has been easy for her.

"I miss his name. Because I ..." Pausing, the thought stirs her emotionally, "Because I put a lot of thought into it."

Q, though, says it feels like "55 years ago" when he was a girl. He says he thinks of crying, too, when he hears the name Qwanaia, because, "that tells me that they don't believe that I'm a boy."

Q's parents are supportive of however the situation plays out. But, they are bracing themselves for a different conversation ahead, with puberty just around the bend.

Francisca says Q is nervous about becoming a teenager, "After all the clothing and stuff, then he started thinking about his body."

For now, they're grateful that — at age 9 — Q has a little bit of time before his body begins to change. But there's not much.