Accessibility links
If These Bones Could Talk: The Stories Human Skeletons Can Tell : NPR Ed When human remains turn up at the bottom of the lake or in the trunk of a car, often its the bones that hold the answer. One of the best places to learn to read these clues is in Tennessee.

There's an open box of skulls on the floor. A table is covered with pelvis bones. Nearby: a pile of ribs, tied up with a piece of string.

I'm standing in a basement room, underneath the bleachers of the football stadium at the University of Tennessee, Knoxville. Looking at floor-to-ceiling shelves filled with cardboard boxes. More than a thousand boxes, and each one contains a human skeleton.

"Pick a box. Any box," says Dr. Dawnie Steadman, the director of the school's forensic anthropology program. "What's your pleasure?"

I scan the rows of boxes. I'm thinking I should pick a female. And so I settle on a box five rows up, just above my head, labeled "Female 57."

Steadman places it on a table and starts to unpack it. Inside, the bones are tannish brown, not the bleached white I imagined.

She knows how to read these bones, and this one tells a story right away. "So this individual needed to have an autopsy after death," Steadman explains, "and now I know why."

She picks up a piece of the skull and points to a place just above the left eye.

I see it: a perfectly rounded hole. 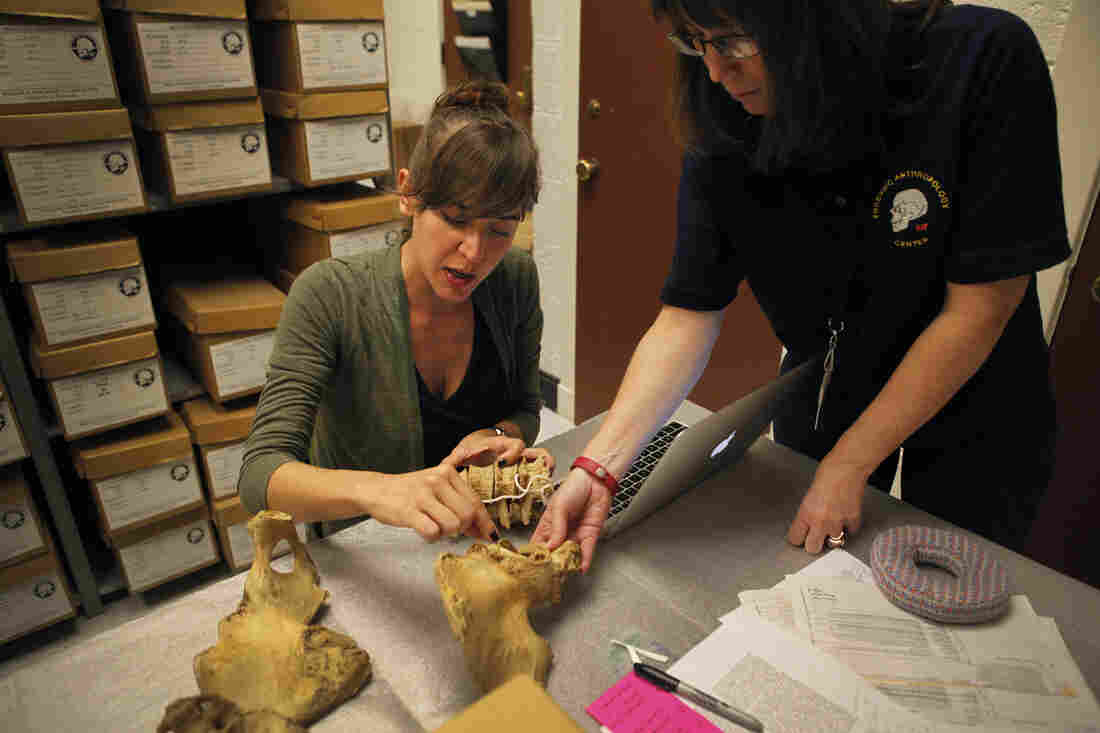 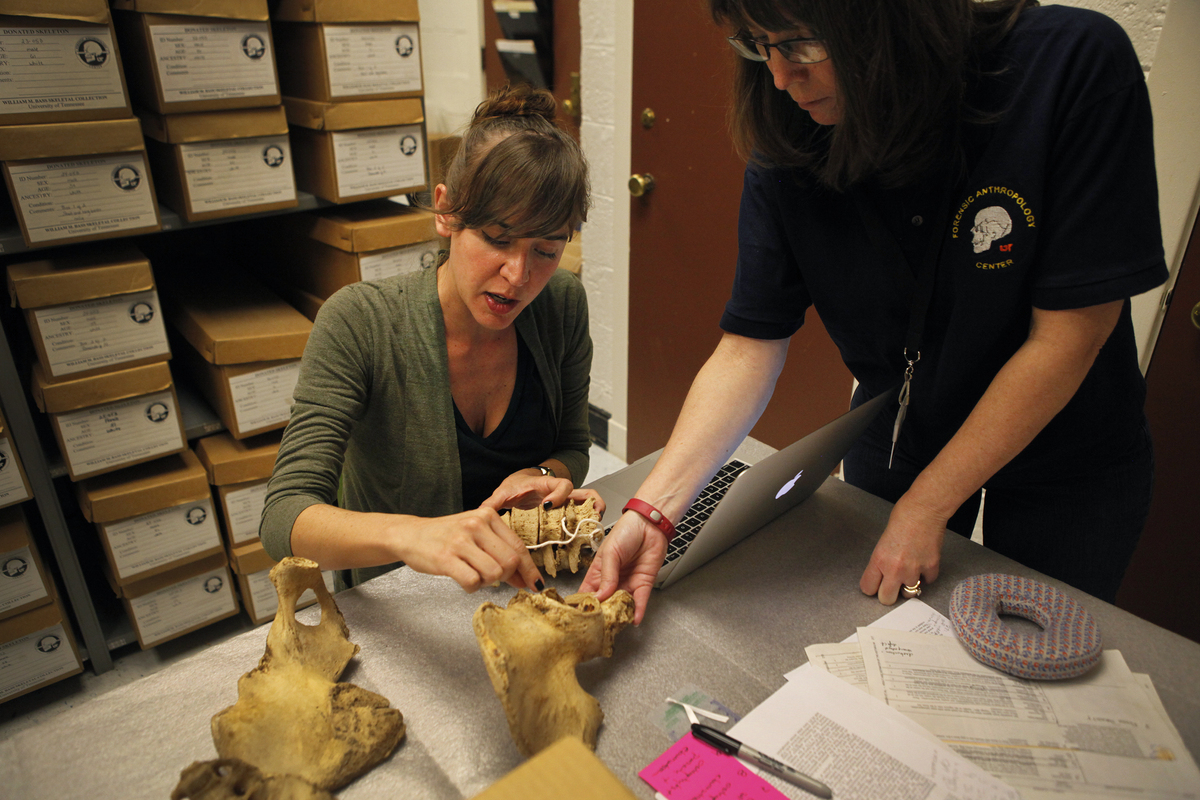 Allysha Winburn, a Ph.D. student from Florida, came to the Bass Collection to study age estimation, osteoarthritis and obesity.

This moment is why people come from all over the world to study these bones. Female 57 is just one of the 1,200 skeletons here, part of what's called the Bass Donated Skeletal Collection.

Anthropologists, detectives, demographers — they all come here to learn how to read these bones: How old was this person? Was it a man or a woman? How did they die?

What they learn here can help them identify a missing person, crack an old murder case ... or understand how obesity relates to osteoarthritis.

Steadman heads deeper into the stacks.

So, how did these bones get here? While they're still alive, people can sign up to donate their remains to the UT's body-donation program. When they die, their bodies are sent here to the university. 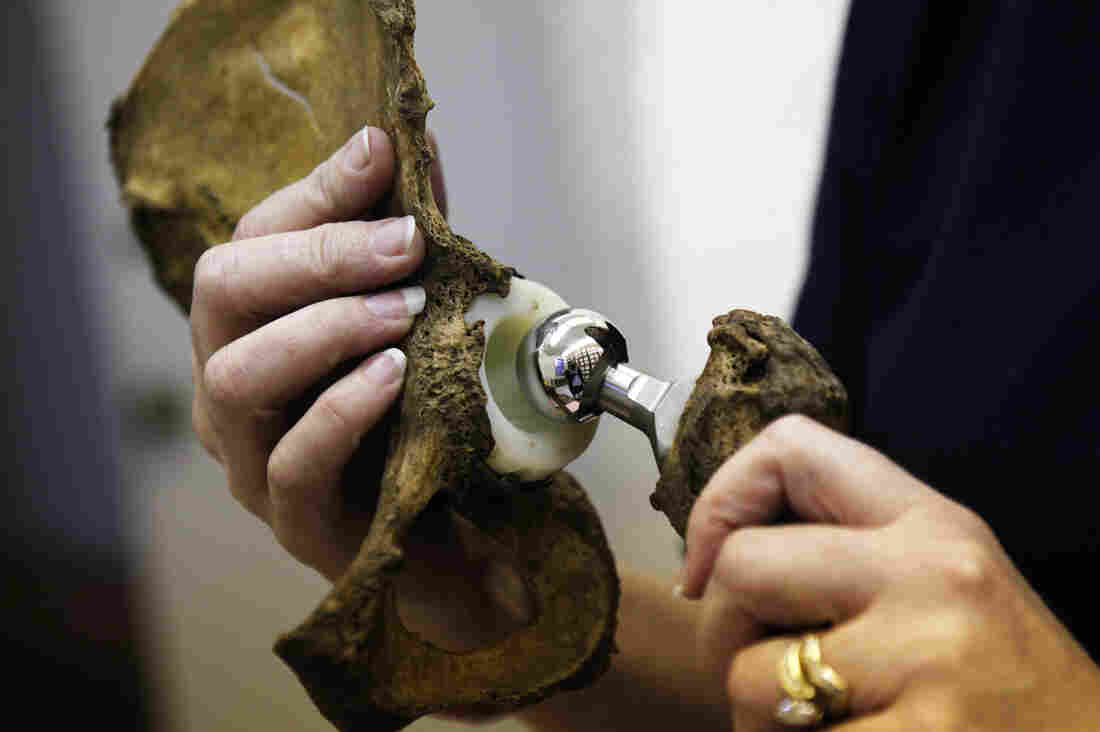 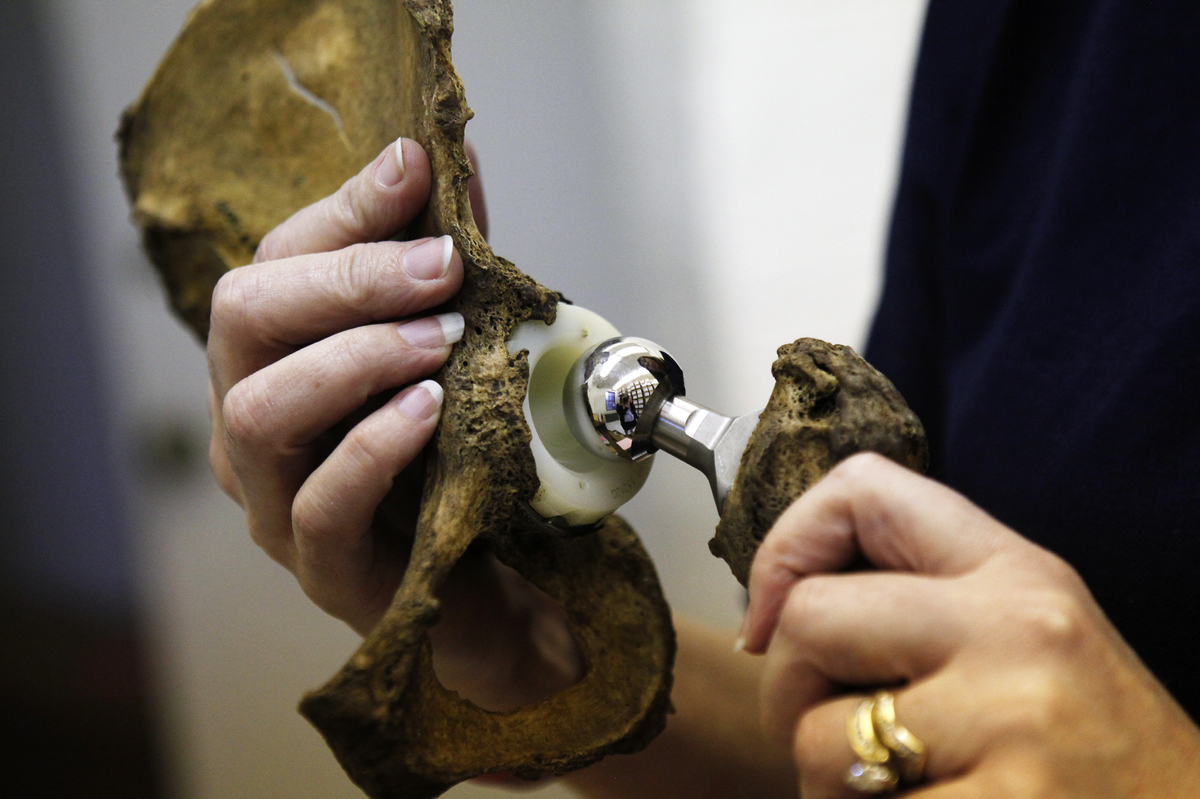 Contemporary skeletons show researchers the side effects of modern medicine, like a hip replacement.

But before they become skeletons in a box, they have another stop to make: a special fenced-in field across campus. There, the corpses are laid out on the ground and students study them as they decompose. When all that's left is the skeleton, students clean the bones and send them here.

The donors "give us all sorts of information about themselves," says Steadman. "They tell us their age, sex ... ancestry."

Everything but their name. To visitors — like me — the bones remain anonymous.

Because these bones belonged to people who died in the last 35 years, many skeletons bear the marks — and products — of modern medicine.

"Here's another prosthetic that we commonly see," says Steadman, pointing to an box open on the floor.

I look closer, and something shiny catches my eye. It's on the end of a leg bone.

"It's the ball of the ball and socket joint. They remove that and they replace it with a really nice stainless steel, metal head," Steadman says. "That's a hip replacement." 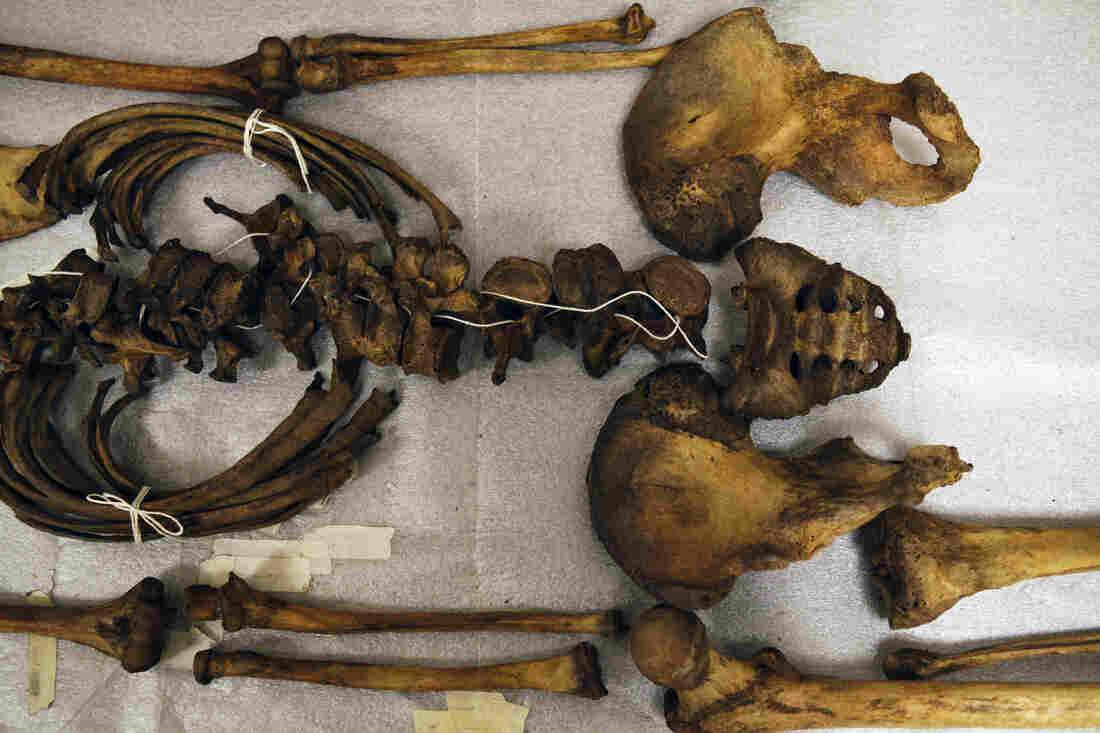 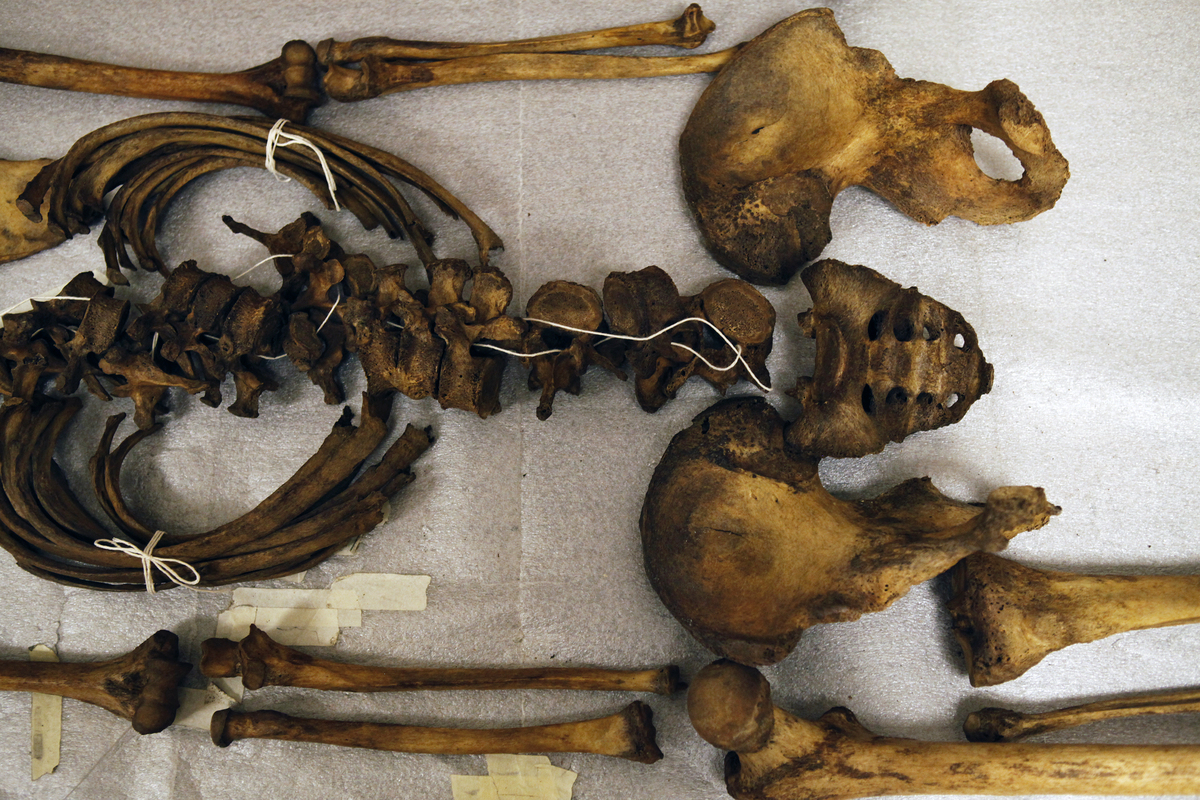 Pelvises, skulls, vertebrae! Its all so cool. But I can't stop thinking about Female 57, that first skull with the bullet hole. We head back to her box, still open on the table.

"I can't believe you pulled out that gunshot wound," Steadman says, laughing.

She rolls the large piece of the skull over in her hands, looking for more clues.

"This looks to me like it could be either a contact entrance wound or exit wound. I'll have to keep looking," she says, sifting through the other bones.

We learn more about this 57-year-old woman. She has a bifurcated rib — meaning she was born with two of her ribs are stuck together. She was about 5 feet 7 — a little taller than I am. I'm dying to know what happened to this woman. Who shot her? Was it a suicide?

But Steadman stops me.

"I'm not gonna say much more because of this ... it now may become somewhat identifying." She trails off.

I get it. We have to protect this women's identity, and we're about to learn too many details.

So we pack up the bones. Steadman returns them to the shelf, tucked between a male, 35, and a female, 81.

These bones, they're silent teachers.

Steadman agrees: "You can absolutely learn something from every single skeleton."

And here they'll rest, waiting for the next set of curious hands.