Accessibility links
Teaching Teachers To Teach: It's Not So Elementary : NPR Ed How are great teachers created? Practice, practice, practice, says Deborah Ball, dean of the University of Michigan School of Education. 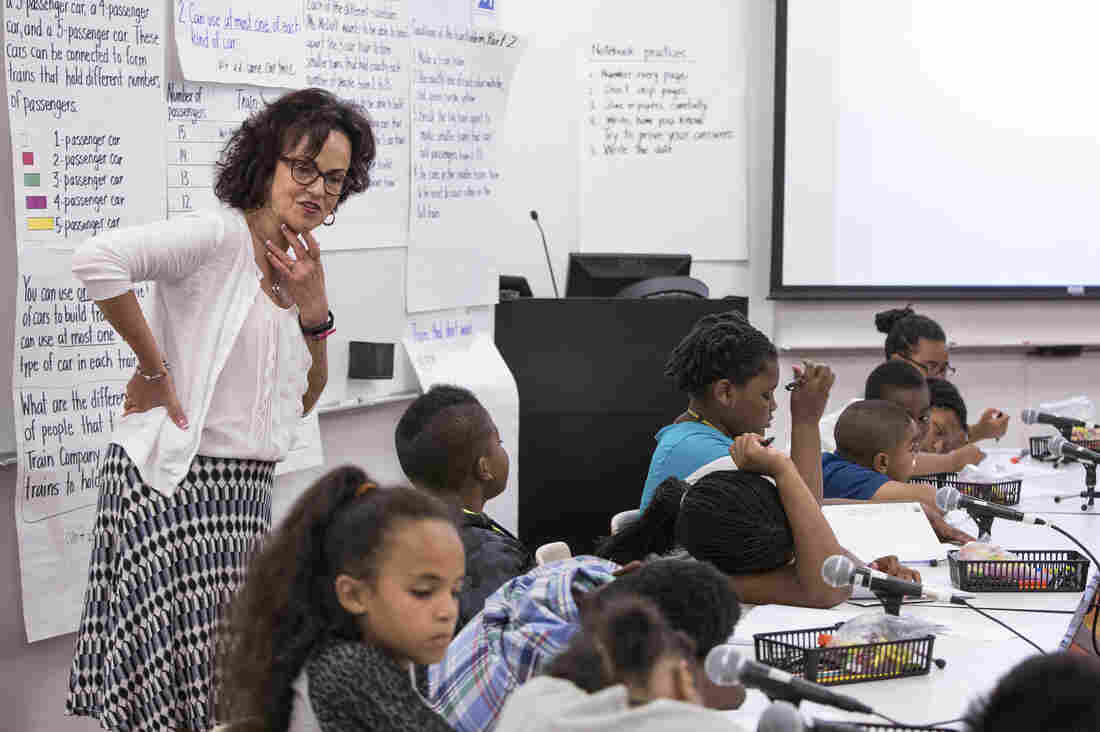 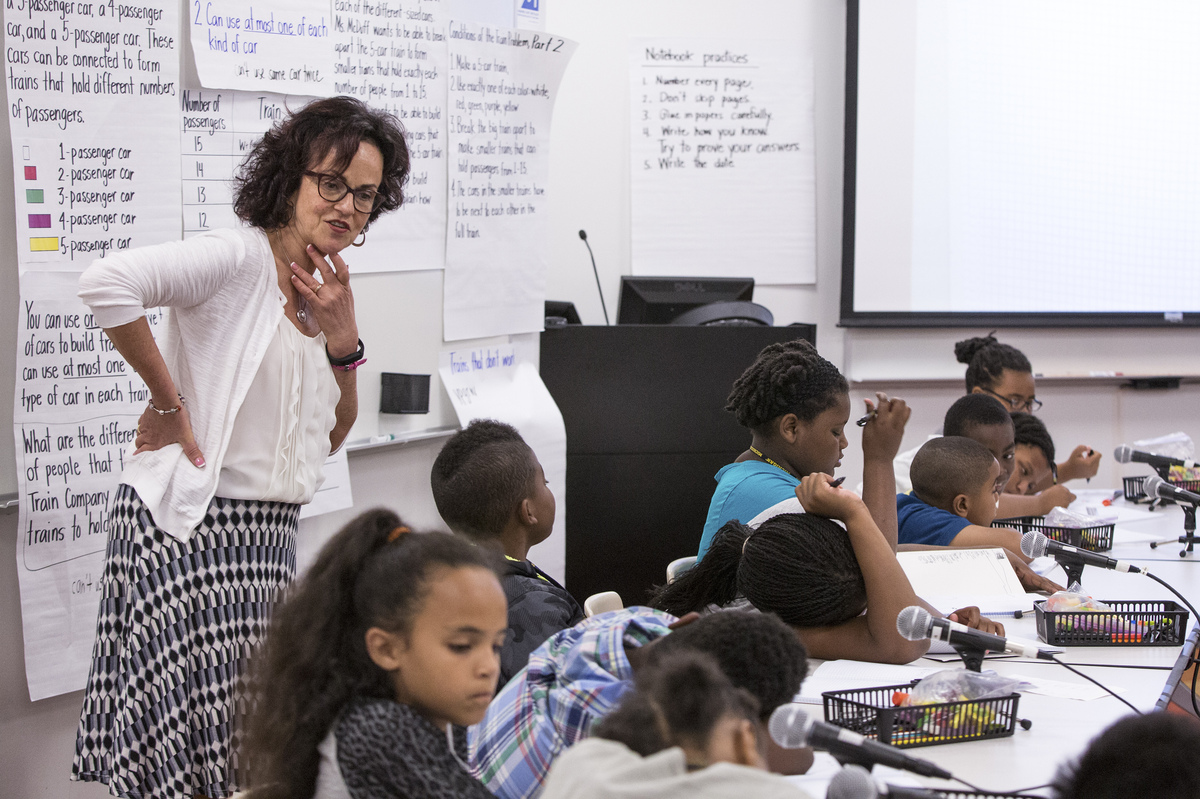 Deborah Ball introduces a math problem to students at the Mathematics Teaching and Learning to Teach seminar at the University of Michigan.

Deborah Ball realized years ago she had a problem.

It was around 1980. She'd been working as an elementary school teacher in East Lansing, Michigan for about five years. But she felt like she just wasn't getting any better at it.

"I felt like I was really thoughtful," she says. "I tried to make stuff make sense to them. I used examples and tried to connect them to their lives, but they would forget things as fast as I taught them. On Friday they could do it, on Monday they would have forgotten."

Ball is now the dean of the School of Education at the University of Michigan, and kind of a rock star in the field of teacher education.

She's spent the past three and a half decades thinking about what good teaching looks like. And every summer, she puts her own practice on display, teaching math to fifth-graders in front of an audience of educators. It's part of a program called Teaching Works she started, in part, to help teachers figure out how to get students to not just give right answers, but really understand math.

"I'm really trying hard to dispel this idea that teaching is this thing you're born to do and it's somehow natural to everyday life," Ball says. "I don't think either of those things is true."

"Maybe they don't really get this"

At the Elementary Mathematics Laboratory on the campus of the University of Michigan, 28 children sit at tables arranged in a horseshoe shape. Ball was just introduced to these students — from a nearby school district — a couple of days before, at the start of a two-week class. But she moves around the room in a way that suggests they've been working together for much longer – commenting on their work, complimenting their thinking and always using their first names.

Today they're working on a fraction problem. It's a tricky one, designed to test their understanding of the concepts "equal parts" and "the whole."

There are some, shall we say, creative interpretations of the math concepts this lesson is intended to impart. It's clear some kids don't understand that a shape has to be divided into equal parts in order to figure out what the fraction is.

What fraction of the rectangle below is shaded gray? 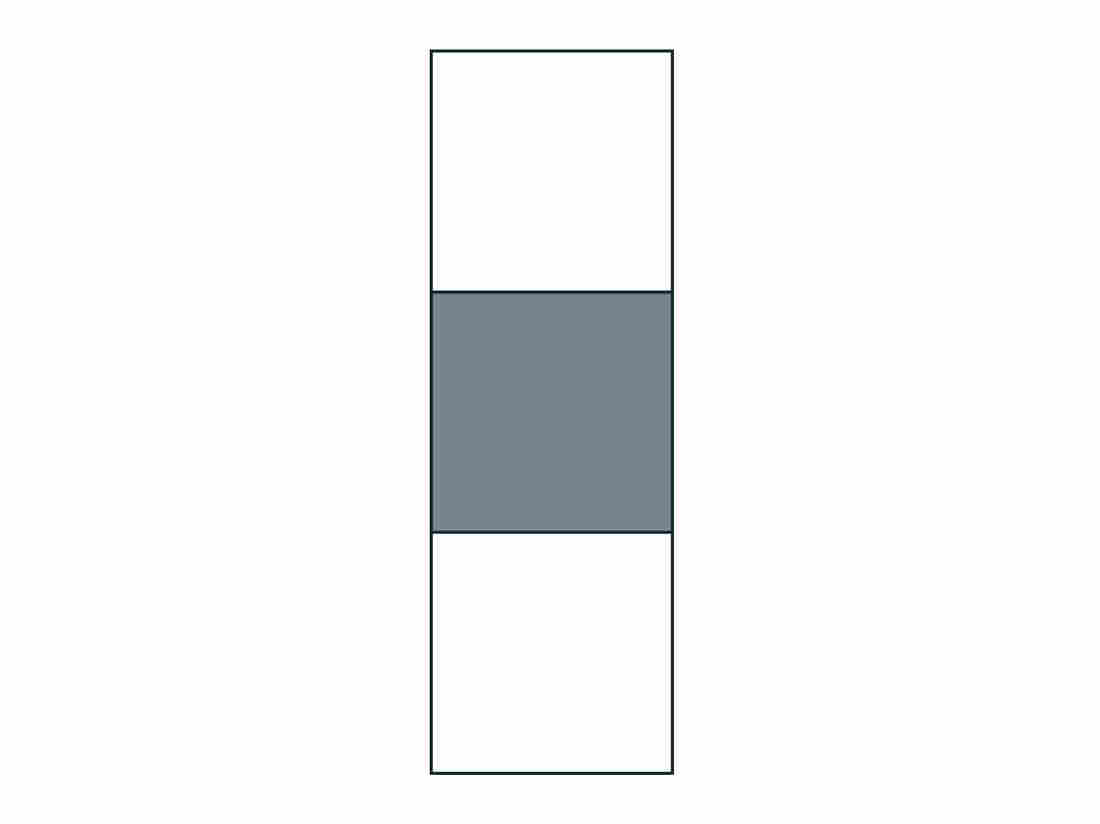 Generally, a class of students will understand right away that the fraction of the shaded area in this rectangle is 1/3 because there are three equal parts. LA Johnson/NPR hide caption 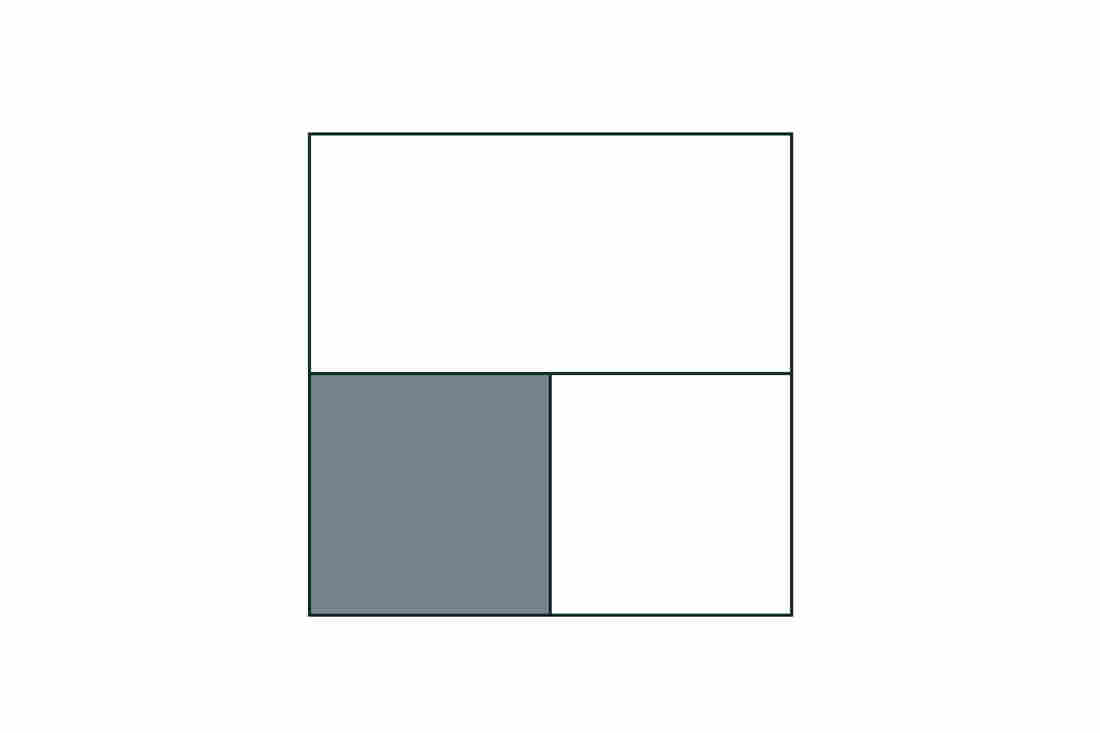 Students might think that the fraction of the shaded area in this rectangle is 1/3, 1/4 or 1 1/2. LA Johnson/NPR hide caption 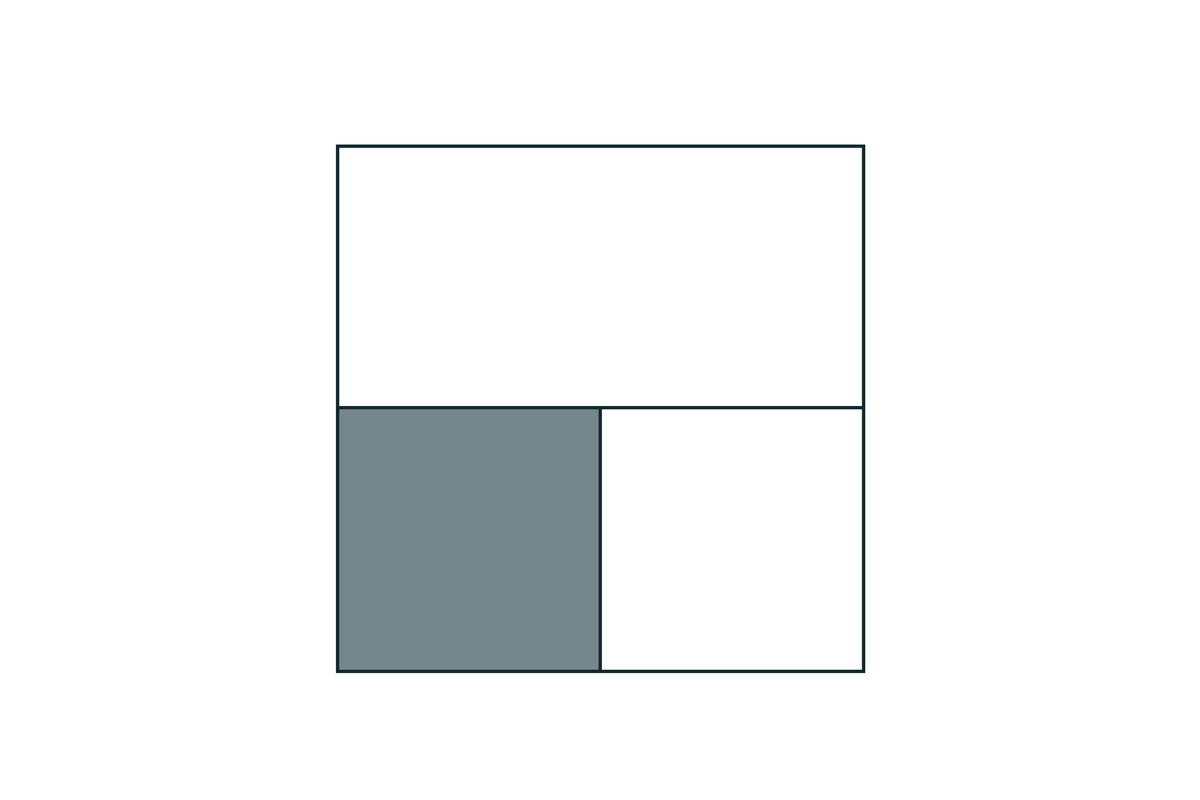 And then, after 22 minutes, a student named Mitchio says something, which Ball then repeats to make sure it sinks in for the whole class:

The parts have to be equal to identify a fraction.

A few minutes later, I catch Ball during a break. She says the thing that was throwing kids with the fraction lesson was that they'd never seen a shape that wasn't already neatly divided into equal parts.

"And that's the question we never ask in school," Ball says. "We just give them all those right answers ... we give them drawings that are already divided correctly, and we never stop to think – 'huh, maybe they don't really get this.'"

It's that question – is this kid really getting this? – that was nagging Ball decades ago as an elementary math teacher. And it's one she'd like more teachers to ask, more frequently.

Noncy Fields teaches fourth grade in Ypsilanti, just a few miles from the University of Michigan. She's been to several of Ball's summer teaching sessions, and says watching Deborah Ball in front of a classroom has totally changed how she teaches.

"When I came out [of college] 20-plus years ago, I was almost married to the textbook and I felt like I welcomed right answers," Fields says. "Wrong answers, I wanted nothing to do with them. It froze me if a kid were to say something wrong. Now, I feel like a doctor. I diagnose problems. I look for those misunderstandings. That's when I dive in and I do my best work."

The University of Michigan is not a school that churns out thousands of teachers every year. By that measure, it's actually a pretty tiny program. But Deborah Ball has had a big influence on the national conversation about teacher quality.

What Ball is trying to model at U of M is a system where future teachers have to demonstrate they can do some core things – like present a math problem, and lead a discussion about it – before they're safe to practice.

She says pilots, doctors, plumbers and hairdressers don't learn on the job. And teachers shouldn't either.