Accessibility links
No Child Left Behind: What Worked, What Didn't : NPR Ed As Congress attempts to rewrite the much-maligned federal education law, it's worth exploring its successes and shortcomings in fixing broken schools. 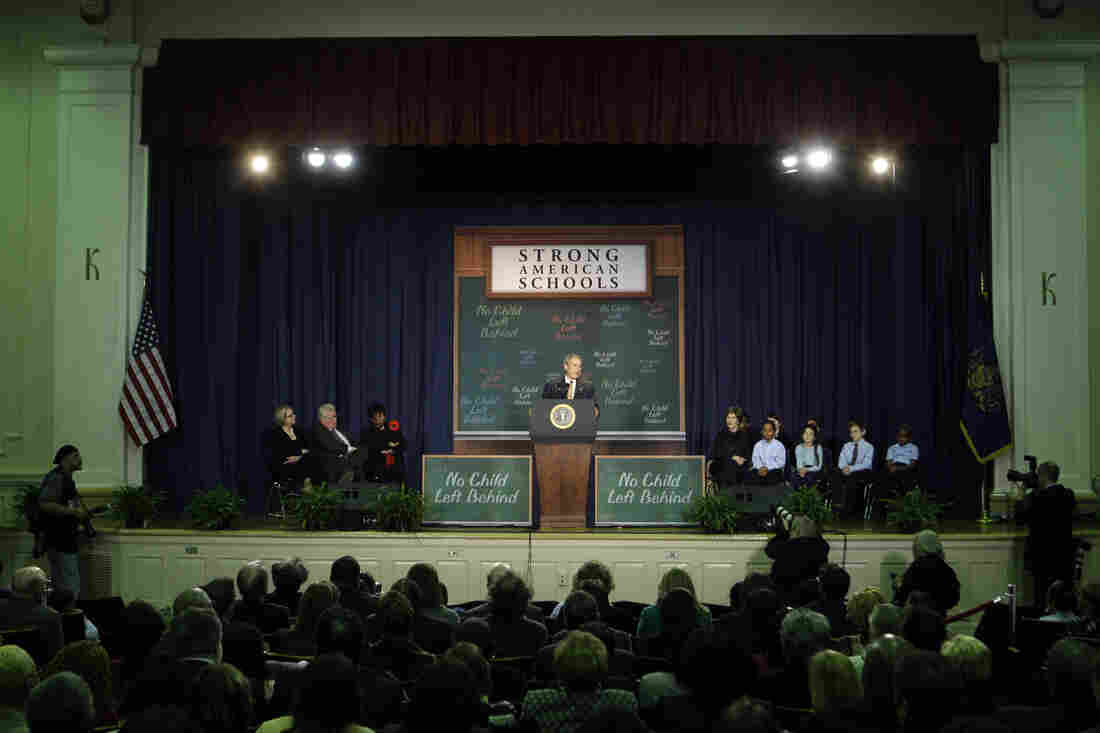 The Elementary and Secondary Education Act hasn't been updated since it was renamed "No Child Left Behind" in 2001 by President George W. Bush. The law was introduced by President Lyndon Johnson in 1965 to help states level the playing field for students living and learning in poverty. Matt Rourke/AP hide caption 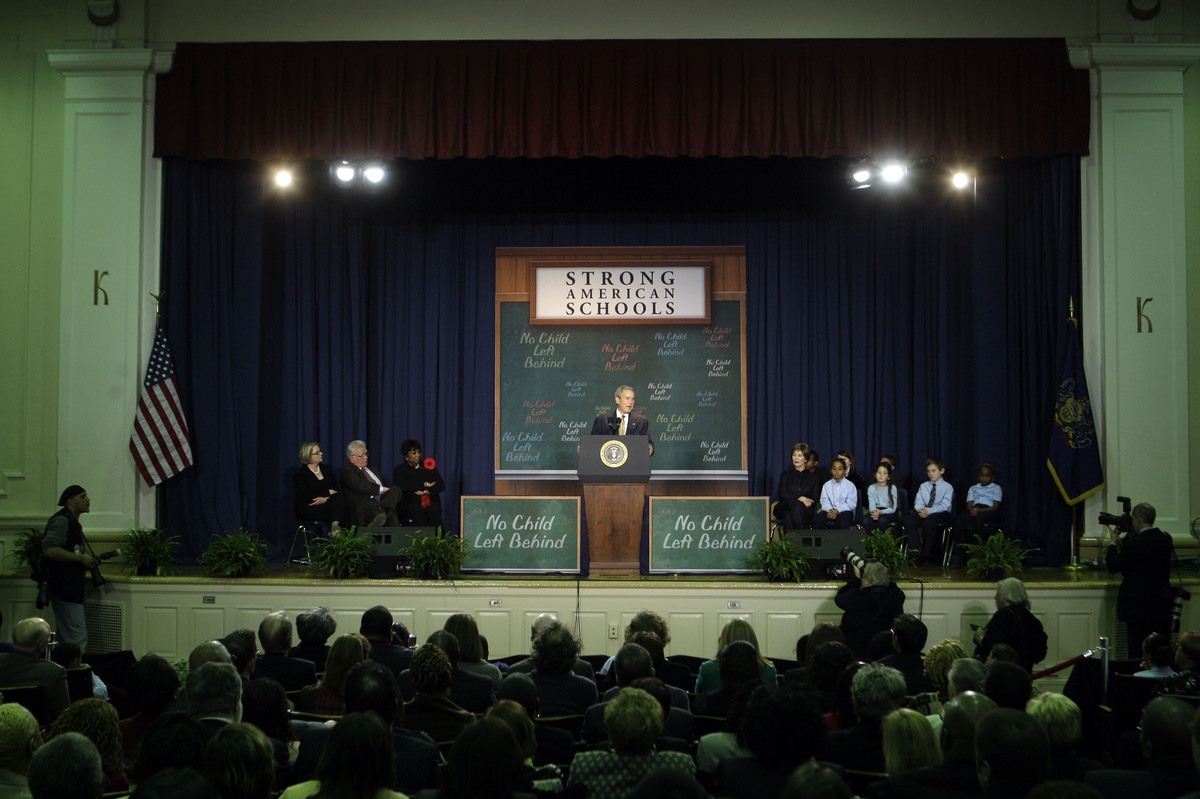 The Elementary and Secondary Education Act hasn't been updated since it was renamed "No Child Left Behind" in 2001 by President George W. Bush. The law was introduced by President Lyndon Johnson in 1965 to help states level the playing field for students living and learning in poverty.

Congress is trying to do something it was supposed to do back in 2007: agree on a rewrite of the Elementary and Secondary Education Act. It's not controversial to say the law is in desperate need of an update.

The ESEA is hugely important, not just to our nation's schools but to the social fabric. It pours billions of federal dollars each year into classrooms that serve low-income students. When President Lyndon Johnson first signed it in 1965, he declared the law "a major new commitment of the federal government to quality and equality in the schooling that we offer our young people."

The ESEA is supposed to be updated every few years but hasn't been rewritten since 2001, when another Texan, President George W. Bush, famously renamed it No Child Left Behind. Bush took Johnson's original vision, to help states level the playing field for students living and learning in poverty, and added teeth.

Those methods included a sweeping new federal system of testing and accountability — as strict as it was controversial. The message to states was clear: We don't trust you to do the right thing by your most disadvantaged students. Schools that fail to educate all kids should be fixed or closed.

With its emphasis — obsession, critics would say — on standardized testing, the law became unpopular among many teachers and parents and technically expired in 2007. But it's on the books until it's replaced.

Now, the challenge for lawmakers is figuring out what — if any — of Bush's tough-love methods worked. This week, NPR is trying to do the same. 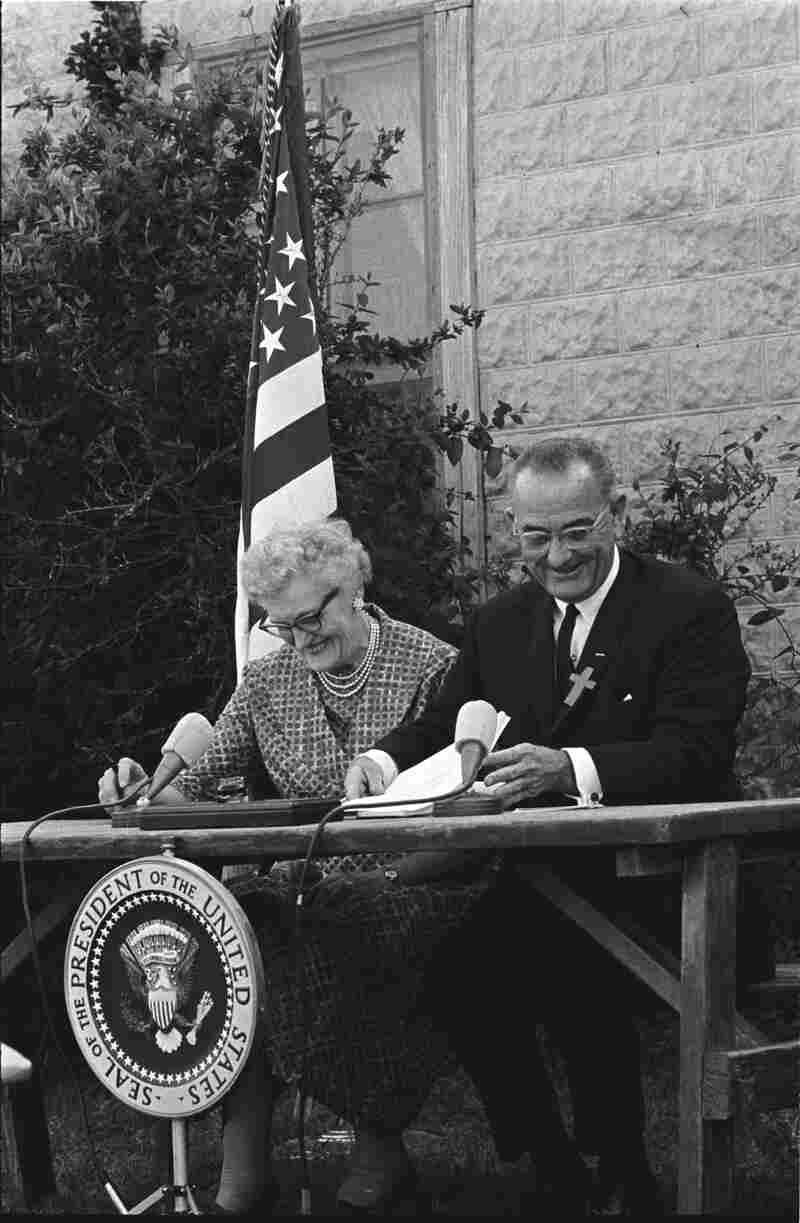 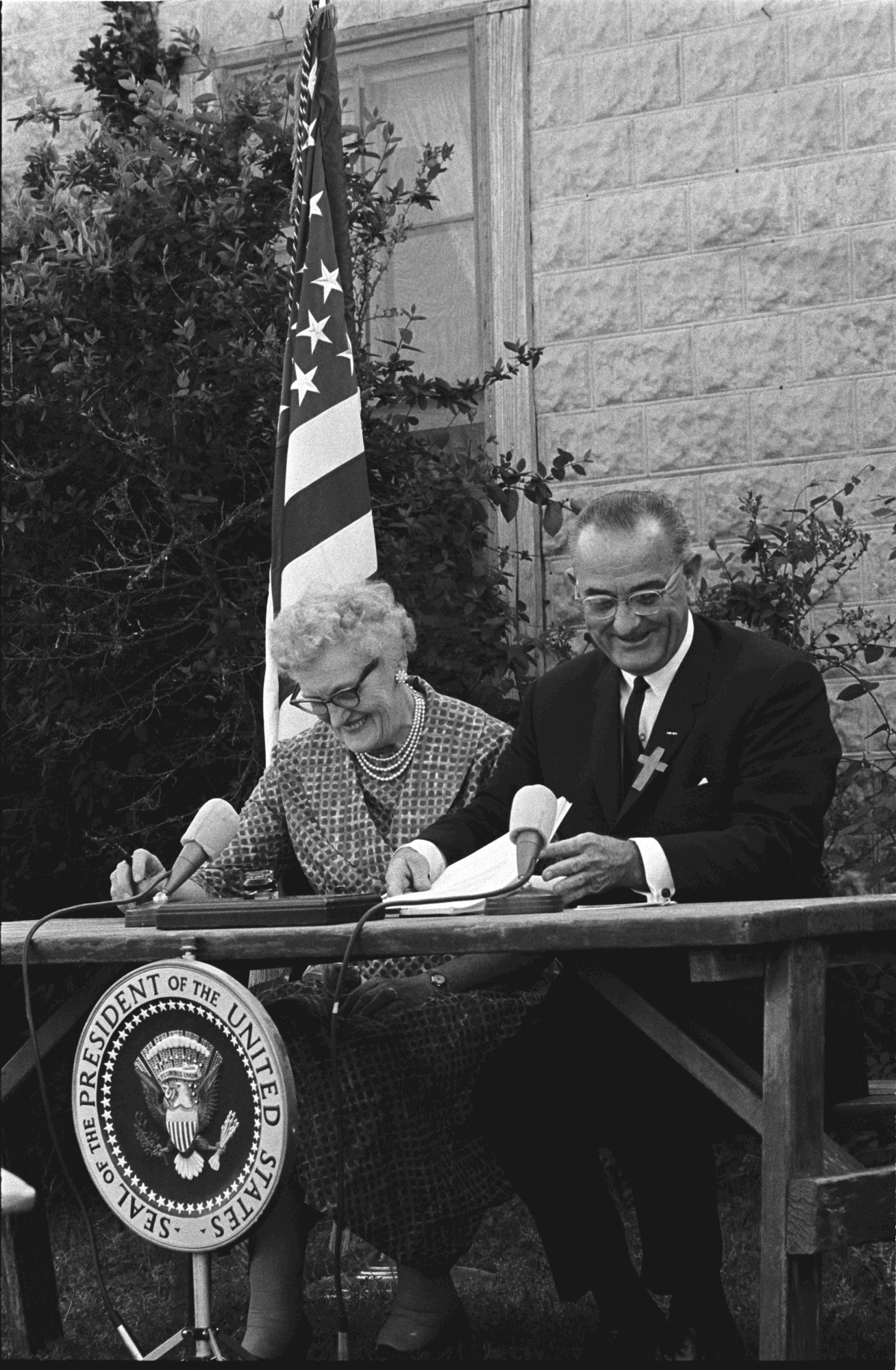 President Lyndon B. Johnson signs the Elementary and Secondary Education Act in 1965 with Kate Deadrich Loney, his first schoolteacher.

Bush's tough-love approach was motivated by the sense that states weren't doing enough to fix their low-performing schools. NCLB created a new role for the federal government: Tough Guy. Right now, the House and Senate don't agree on much, but they do agree that the Tough Guy routine didn't work.

The recent bills crafted by both chambers — and that must now be reconciled — leave it to the states to decide what to do about struggling schools. That includes how to fix them and whether or when to close them.

But at least one researcher thinks the law, like the classic Tough Guy, is a little misunderstood. And that parts of the law did work.

"NCLB is usually regarded as a sledgehammer, but it's actually fairly complex and fairly nuanced," says Tom Ahn, who teaches at the University of Kentucky.

Ahn has a Ph.D. in economics and writes papers with titles like, "Distributional Impacts of a Local Living Wage Increase." In short, he's an unlikely guy to have written one of the go-to studies on NCLB. But he did. And it's an eye-opener.

A few years ago, Ahn and his colleague, Jacob Vigdor, wondered: In spite of the controversy, did No Child Left Behind do some good? Did it improve low-performing schools? For answers, they studied the schools of North Carolina, though what they found can be applied just about anywhere.

Under NCLB, schools were judged on something called Adequate Yearly Progress. The goal was to get every child to grade-level in reading and math by 2014. It was an impossible goal that infuriated teachers and administrators alike because it held all children — and all schools — to the same timeline.

The law didn't care if a child had begun the year three grades behind in reading and a teacher helped her make two years' worth of progress by May. According to NCLB's strict proficiency guidelines, that student was still a year below grade-level.

The law also required schools to break down their student data into lots of little subgroups, including race, disability and socioeconomic status. Ahn says that was a game changer. "If one group of disadvantaged students underperformed, the entire school was considered underperforming."

Or, as Nancy Barbour puts it: "Your high-fliers can't cover for your low-fliers."

In 2002, Barbour was the principal of a very good school in Durham, N.C. She says the new law made her and lots of fellow principals and teachers nervous, thinking "Oh no, oh no. In four years we're gonna be restructuring, and in six we're gonna be closed down."

Some of that fear was justified. Because of the law's attention to these smaller groups of students, some of whom tended to underperform, many schools that had previously earned high marks suddenly got red flags. This is the first of two important lessons Tom Ahn learned studying NCLB.

"The ones that had the capacity to shape up, they did," Ahn says.

He found that many schools improved after that first warning with no sanctions at all — just the threat of sanctions. Because these schools had relatively few kids below grade-level and enough money and staff to focus on them.

Ahn found a very different story among schools where lots of students were struggling. For these, often poorer schools, the law was like quicksand. Donna Brown is director of federal program monitoring and support for North Carolina's public schools, and she saw the quicksand firsthand.

"When I came to the department in 2004," Brown remembers, "there were nine schools in the state that were identified for some level of improvement sanction. And, by 2008-9, there were 521."

That's nearly half of all schools in the state that received federal Title I dollars. After two years of failing to make progress, a school had to offer students the right to transfer to a better school.

The problem with this transfer policy, says Brown, is "you're not really doing anything to address the needs of that school."

It was more punishment than panacea. Schools often sank deeper into the quicksand. If they continued to fail to make Adequate Yearly Progress, they were also required to pay for tutoring services and, later, to choose from a list of "corrective actions," including changing curriculum or lengthening the school day. And here begins the other great lesson of No Child Left Behind.

Lesson No. 2: The Lobotomy

For schools stuck in the quicksand, Ahn says, "these sanctions start stacking up, and at the end of the day, they don't help the schools to improve."

That is, until the last, most-feared sanction — restructuring — which Ahn likens to "a lobotomy."

After five years, schools "in need of improvement" were supposed to write a restructuring plan that could include firing teachers, reopening as a charter or handing over control to the state. And in Year 6, they were supposed to do it.

In North Carolina, Ahn found the most common strategy was simply replacing the person at the top, the principal. The effect on student performance was significant, equivalent to "reducing class size by a third to a half."

Why did the lobotomy so often work? It's hard to say. Ahn points out that, to be forced into restructuring, a school had to be considered failing for six years.

"There's something seriously wrong with the way the school has been run," Ahn says. "And, when leadership change occurs, basically there's a sea change."

He says he could see it not only in student performance but in teacher satisfaction surveys. After the lobotomy, teachers were often happier.

At least, that's what the data suggest. To really understand restructuring and why, Ahn says, it was the only sanction under NCLB that seemed to work, we need to see a lobotomy firsthand. We'll have that story later today.