Accessibility links
For At-Risk Kids In Baltimore, Mentors Provide Far More Than Just Homework Help : NPR Ed At Baltimore's Renaissance Academy High School, mentors help students cope with the trauma in their daily lives. The principal says the aim is not just to keep boys in school, but to keep them alive. 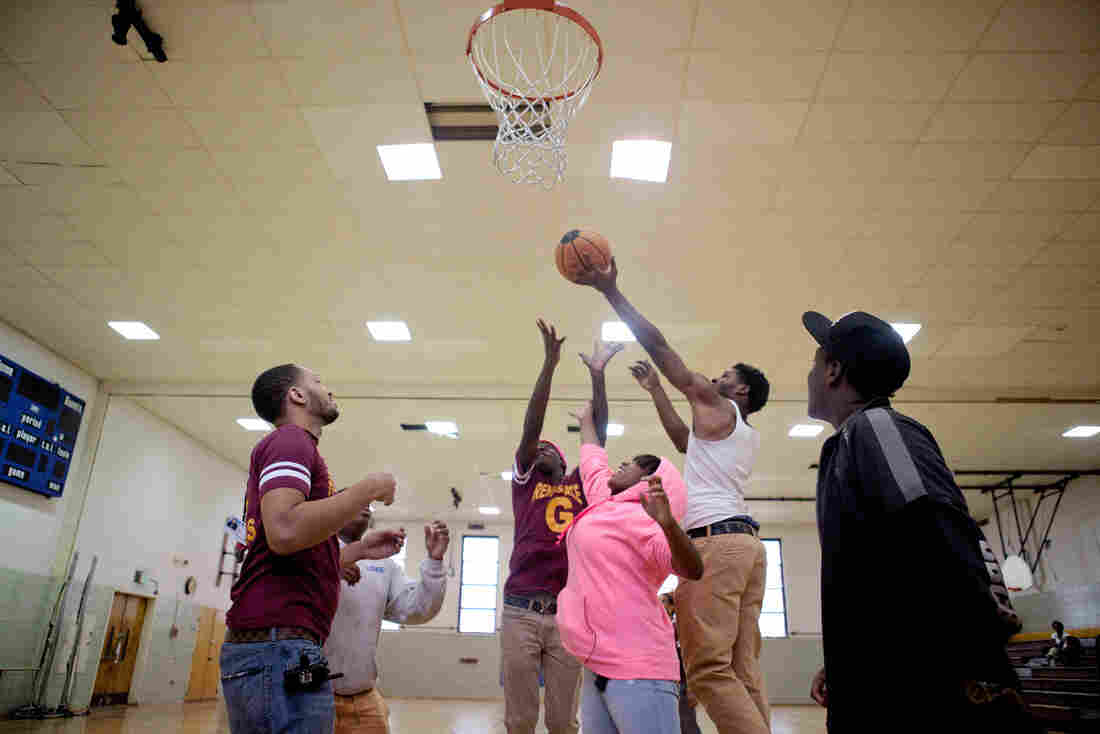 When West Baltimore's Renaissance Academy High School hired four African-American mentors earlier this year, student Jalone Carroll wanted nothing to do with them. He figured they would come "mess everything up, and then dip," or disappear.

"We didn't know how to take that type, you feel me," says Carroll. "Somebody that cares, somebody that really wants to see us succeed."

Carroll is 20, but he has only enough credits to be in 10th grade. He says no one at other schools he attended ever seemed concerned. "They just give you work, and if you ain't do it, you just didn't do it. You got zero," he says.

But the mentors at Renaissance Academy did care, and slowly they won Carroll's trust. When Carroll was hungry, one mentor would share the small, round pizzas he kept in the fridge. Another would make sure Carroll came to school and check on his homework. Carroll says their bond is now so close that — in perhaps the ultimate test in this impoverished community — if someone tried to hurt a mentor, he thinks some students would jump in to defend him.

"It's crazy," he says. "Some of them treat them like their own family members."

The wonder in his statement gets to the heart of the problem, as Renaissance Academy Principal Nikkia Rowe sees it.

"Ultimately, it's about our children not necessarily having the benefit of relationships," she says. Last spring, Rowe hired the four men to mentor 20 male students each, based on what she says is her "strong belief that human beings change their behavior based on deep, interpersonal relationships."

Renaissance Academy abuts the impoverished neighborhood where police arrested Freddie Gray, the unarmed black man fatally injured in police custody last spring. Two-thirds of the students here are boys, and Rowe says every one "has experienced trauma, and at any given moment something can trigger it." She says they are boys who have been neglected, or physically abused by a loved one. They've been in foster care and in jail. It's no wonder, she says, that so many fail classes or get suspended. 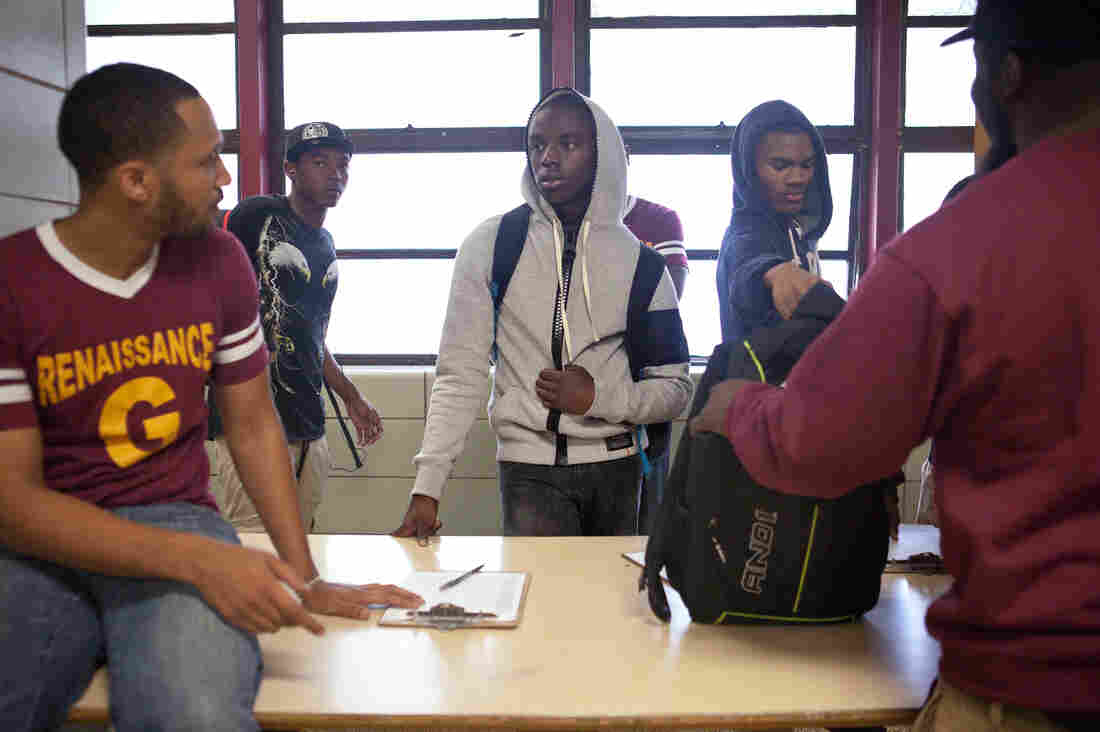 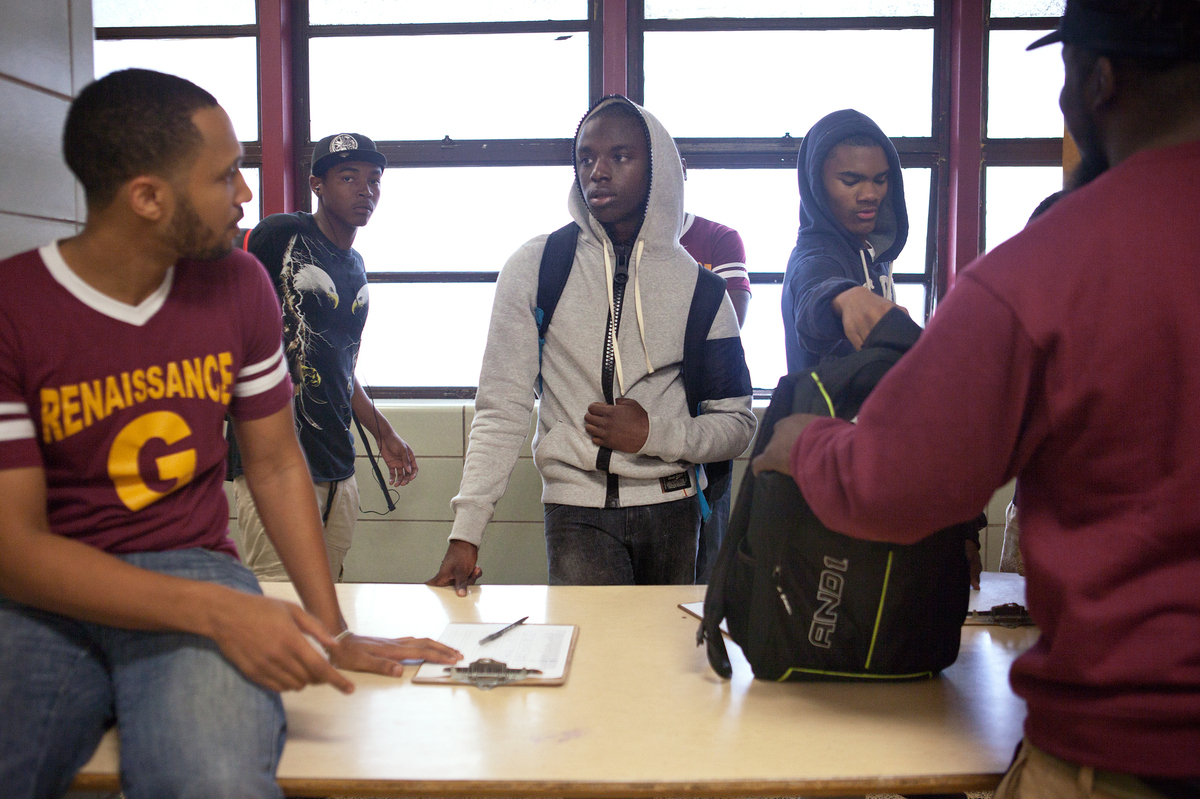 The mentors help with classwork for those who need it. They step in if a student acts out. They offer hugs if someone's upset. They also help get kids to class, which turns out to be a surprising challenge.

"Go to class Dayvon, please. Come on, brother," says mentor Marcus Taylor, desperately trying to channel the energy in a packed hallway. Tall and thin, in jeans and a sweatshirt, 27-year-old Taylor almost looks like a student. As he checks a bathroom and locks the door, there's a burst of commotion and cursing.

"Watch your mouth!" he orders. Two boys have taken off their belts and swat at each other. Taylor moves in, loops his arm around one boy's neck, and guides him away.

"Thank you, appreciate you," says a teacher as she steers the other boy into her classroom.

The mentor jobs are full time, with some federal funding and help from a partnership with Promise Heights, a nonprofit that's part of the University of Maryland's School of Social Work. But these men are not social workers or psychologists. In fact, only one has a college degree.

The men, in their late 20s and early 30s, bring something else: a background students here can relate to.

"I ain't had a father," says Taylor. "I grew up in a single-family home myself, and I had two cousins. Eight kids in a one-bedroom house."

Mentor Antwon Cooper is from East Baltimore, where he "hung in the projects." Corey Witherspoon's family was homeless for a time. And Daijeon Powell grew up with Freddie Gray — "Pepper, that's what we called him" — in the same public housing complex.

The men say they can show students that there's a way out. Each came to this from other jobs — in business and retail, professional sports and the Navy. 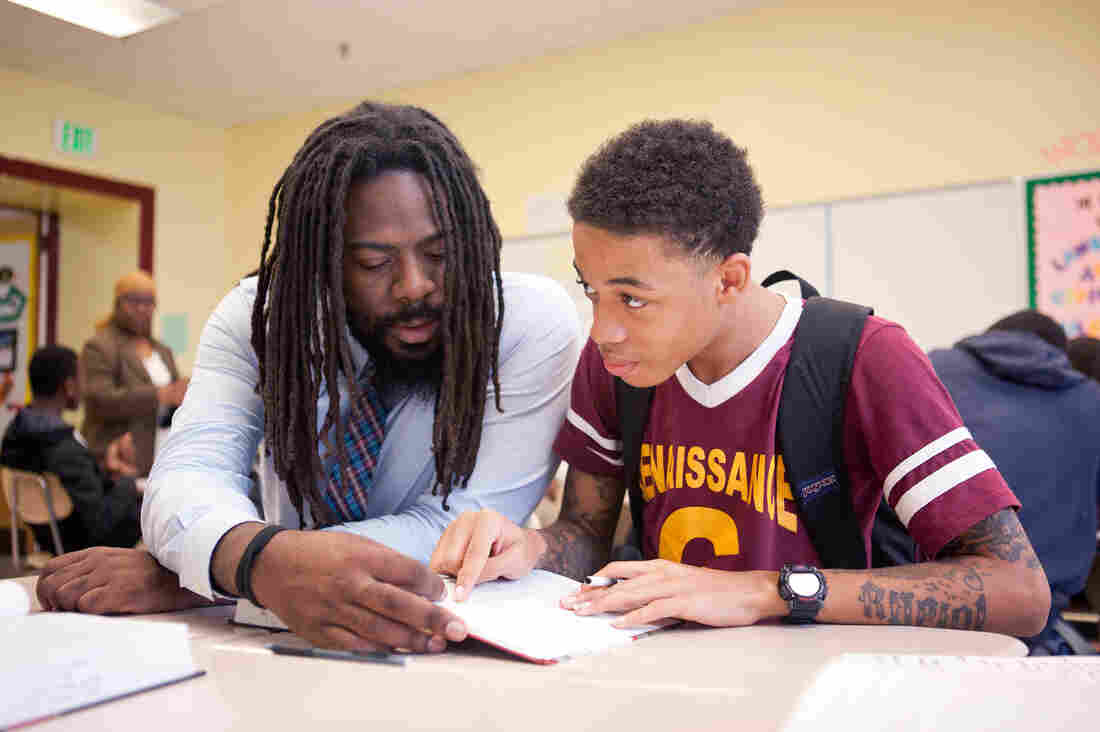 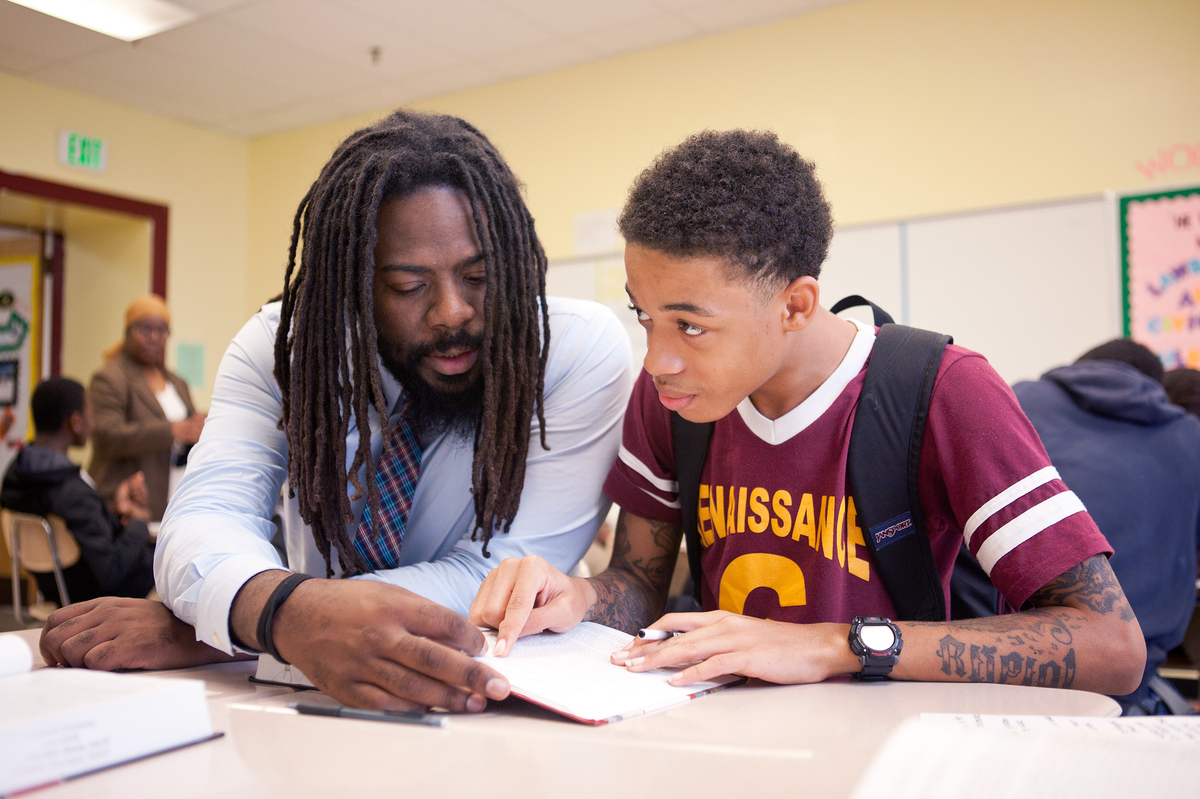 Still, it was hard to break through.

"It was, 'Why you talking to me? Why you saying good morning to me? Why you being so happy, brother?' " recalls Cooper, who wears his hair in long, thick dreads, and a school T-shirt that says "Scholarship, Discipline, Justice."

Sitting in a small office, student Jalone Carroll admits he had a "street mentality," looking out for himself and wary of anyone who tried to get close. But he believes Cooper and the other mentors understand his troubles better than the teachers here, who have things he can hardly imagine, like college degrees and a home in the suburbs.

"They never worry about where they gonna get their meal from, or how to get to school," Carroll says.

"I never grew up with my father, so I have no need to want anything from a man figure," he says.

But Boyd admits he was slacking off in class, skipping school. Now his mentor asks to see his homework and even reads his essays. And he's just there, if Boyd wants.

"He came to visit me on my prom, because I asked him to. I felt he should be part of it."

Aaron Smith, a 17-year-old in 11th grade, says he was on the verge of dropping out before the mentors came. "Once they started telling me, you know, 'Life ain't no joke, get your high school diploma, get out,' I started taking it more serious." 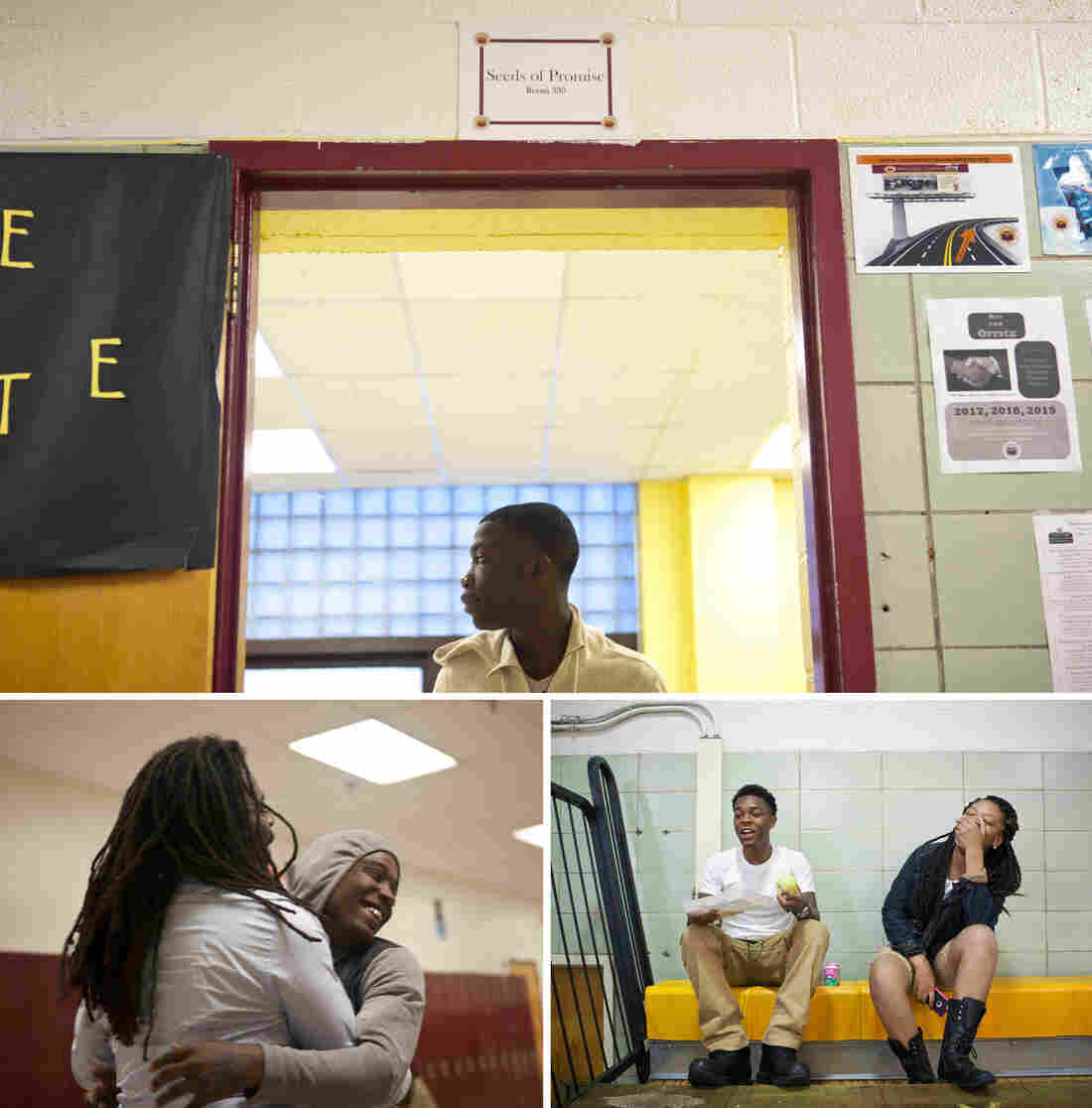 TOP: Student Dwayne Russell walks out of an office after checking in to start his day at school. RIGHT: Students Aaron Smith, 17 (left) and Lanaya Whittington, 16, interact in the gym during their lunch break. LEFT: Antwon Cooper embraces student Darian Bowers, 17, in the hallway. Jun Tsuboike/NPR hide caption

The mentors are part of a larger effort to support students at Renaissance Academy. Promise Heights also funds a social worker, Hallie Atwater, at the school. Atwater runs a food pantry on one floor and keeps donated backpacks and school supplies in an office on another. She tries to solve the daily crises that can derail kids' education.

One student's family has been unable to pay electricity or rent, so Atwater has been on the phone with relatives, the landlord and the electric company.

"Right now I'm just trying to pull as many resources as possible to stabilize that family unit," she says, "so the student can come to school every day, and have space and room in her brain to learn."

On a recent Friday, someone at a Metro station picked a fight with a student on his way home from school. Atwater rounded up community members to escort students the next Friday. The school mentors now accompany them to the Metro every day.

In fact, a lot of the mentors' work comes after hours. They take boys to the movies on weekends. Parents have texted them at all hours when a child has stormed out of the house after a fight, or been picked up by authorities.

Taylor let one student stay with him a couple of nights — with a parent's knowledge — when things were bad at home. Cooper says a boy texted him recently, wanting to talk.

"And I called him, and I was on the phone with him for an hour and I really didn't say too much," Cooper says. "He just talked, because that's all he wanted, was somebody to listen to him." 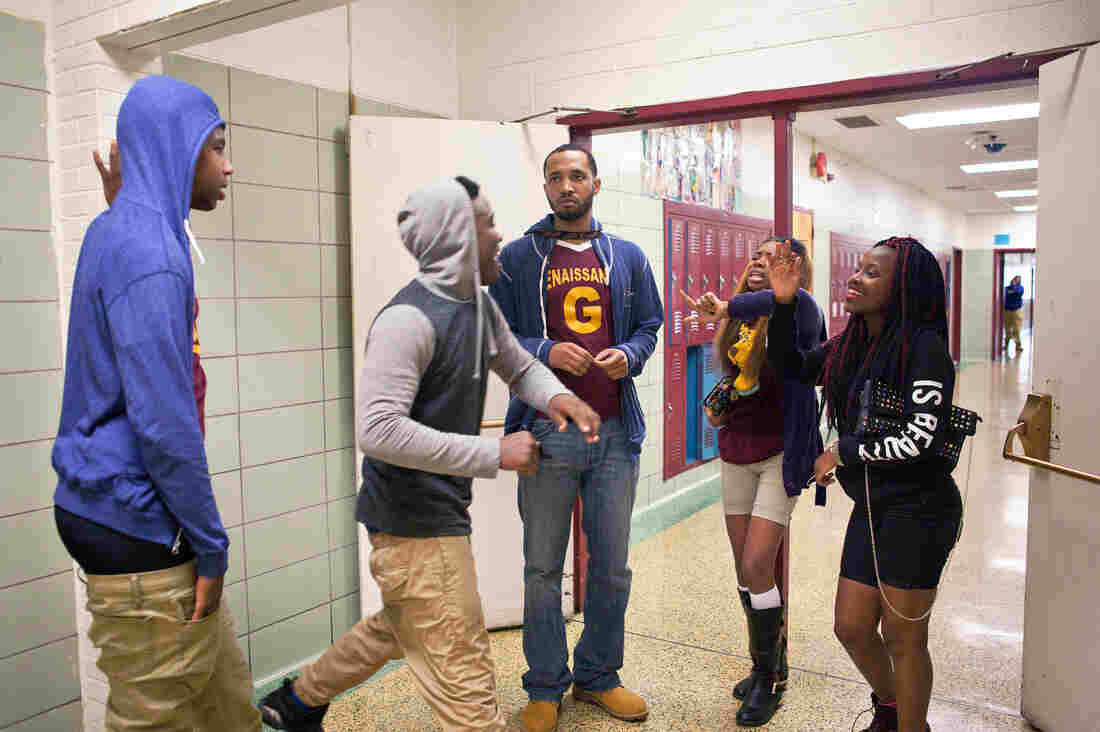 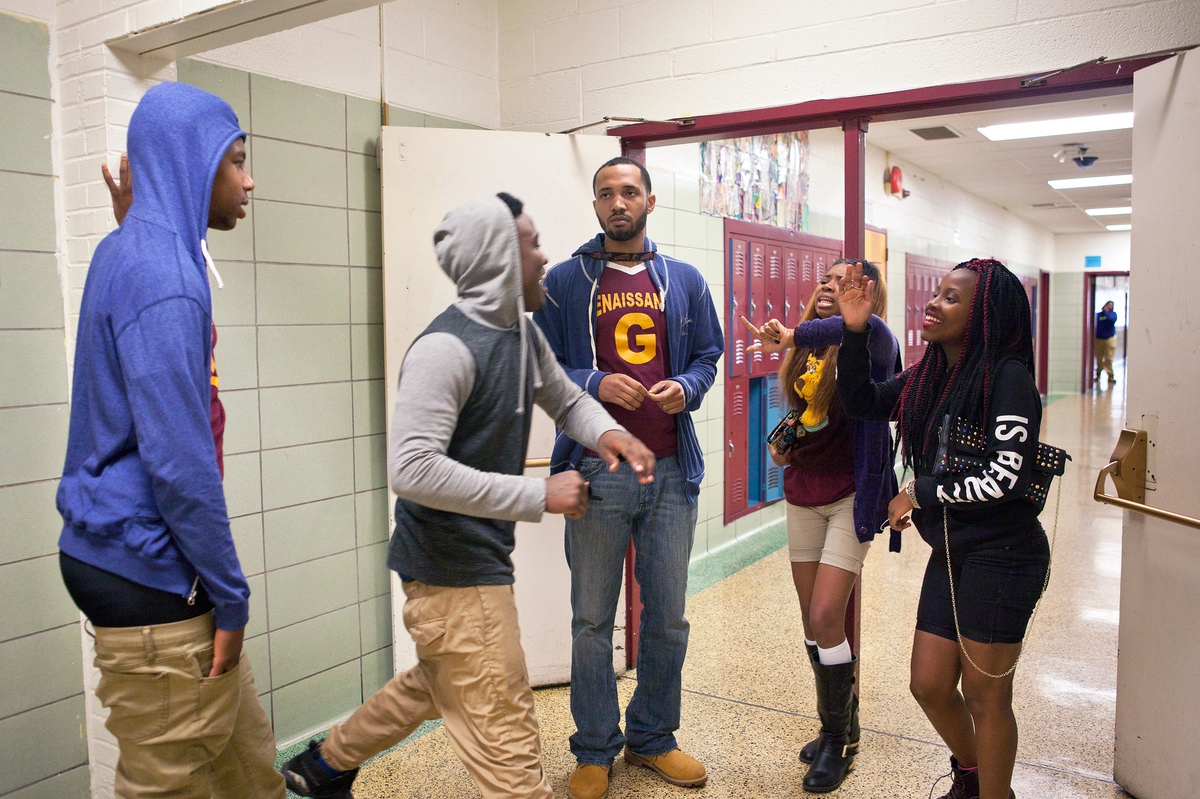 In school, the mentors also listen, and mediate, when disputes break out.

During the last class change of the day, a girl starts shouting after a boy rams into her. They're pulled into a meeting — what's called a "circle" — with a deputy principal and mentor Cooper.

The girl slumps in a chair, sulking. They boy says he was just playing. Cooper turns to him and says, "You understand why she's upset, though?"

This spat is small. But Taylor says an argument outside school, on Baltimore's streets, can easily turn violent.

"So we try to give them a sense of dialogue on how to cooperate with a person," he says. "Communication. 'Cause that's how you stay alive." 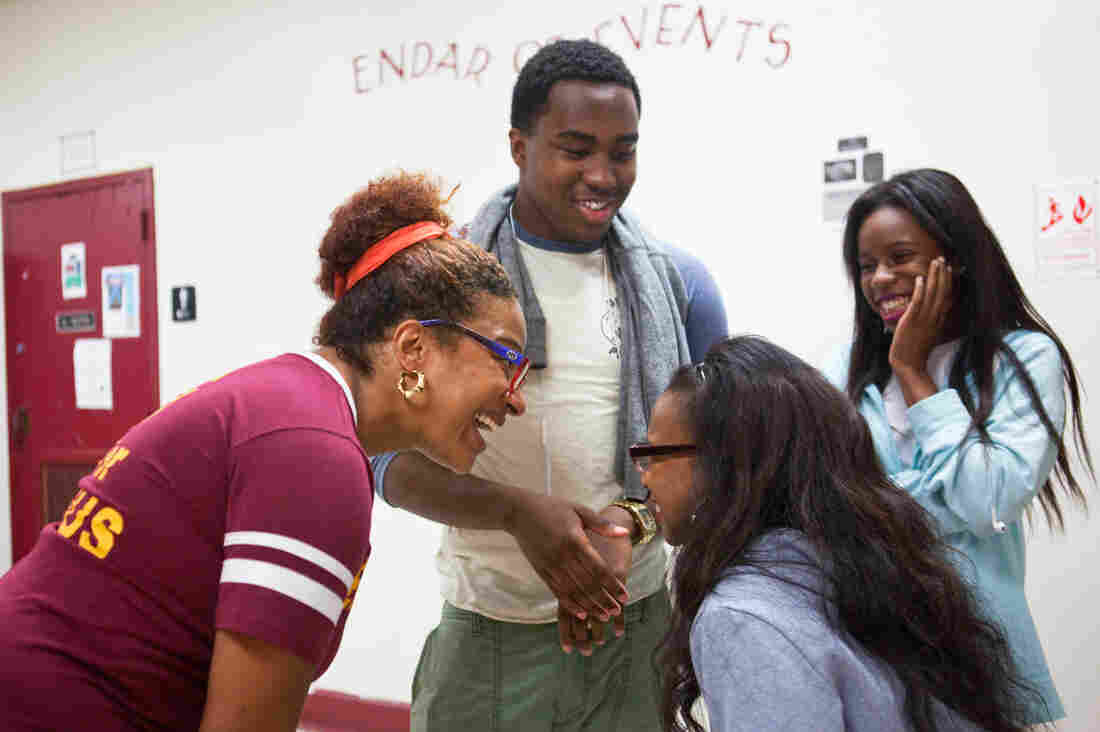 Principal Nikkia Rowe (left) exchanges laughs with students as they head to the cafeteria for lunch. Jun Tsuboike/NPR hide caption

Since Renaissance Academy's mentors started last spring, suspensions are way down and grades are up. But Rowe, the principal, says the real measure of success may not come until next summer.

That's the time when students don't have this safe place to be every day. Rowe says she holds her breath, waiting for the call that another young man has been killed.

She hopes getting that message across will keep her students alive. For now, she's trying to find the money for more mentors.