Accessibility links
From 'Book Strap' To 'Burrito': A History Of The School Backpack : NPR Ed Backpacks and textbooks are a match made in heaven. But not too long ago, students walked to school carrying their books in their arms.

From 'Book Strap' To 'Burrito': A History Of The School Backpack

From 'Book Strap' To 'Burrito': A History Of The School Backpack 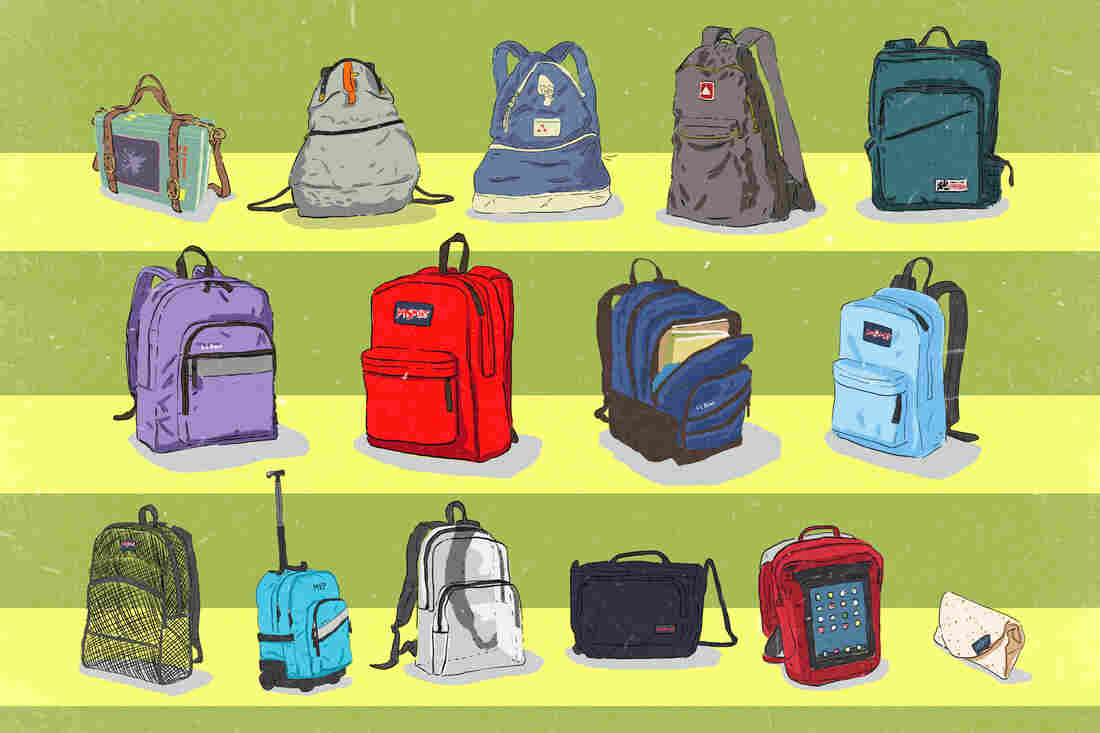 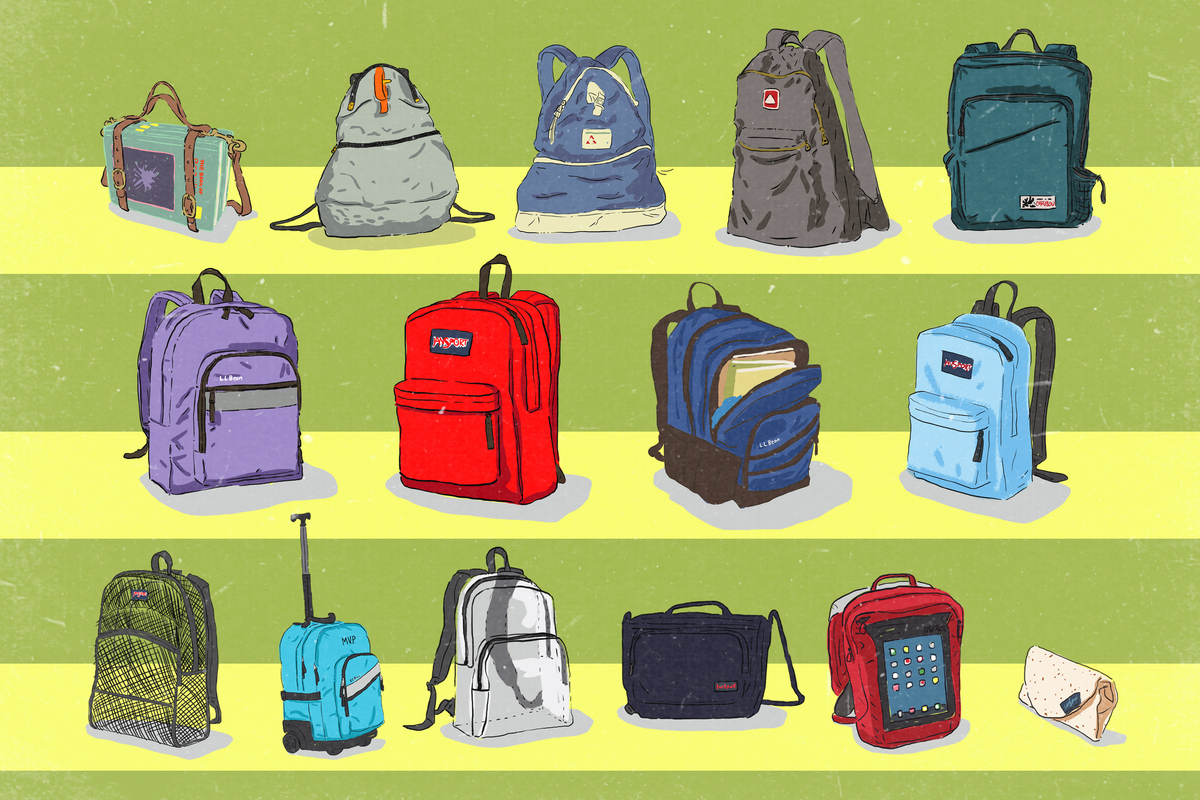 Our Tools of the Trade series is exploring some of the icons of schools and education.

My editor, Steve Drummond, isn't that old of a guy. He's from Michigan — Wayne Memorial High School, class of '79.

But when he starts talking about backpacks, he dips into a "back in my day" tone that makes you think of a creaky rocking chair and suspenders: "You know, Lee, when I was in school, no one had a backpack!

"You just carried your books in your arms." He says it like he's talking about sending a telegram with Morse code. "No one really thought about it, that's just what you did."

And, like all good memories, he tops it off with some commentary about the younger generation.

"Nowadays, backpacks are everywhere. It's almost impossible for younger people to imagine a world without them."

Right about then, I started to tune him out. I think he went off about how our phones are practically glued to our hands or something like that.

But it's true. I'm one of those younger people, and I can't imagine going to school without my backpack.

Since my first day of kindergarten in 1995, my JanSport and I were inseparable. It was a fluorescent green SuperBreak model. My dad wrote my name on the front with a Sharpie (he did his best to match the JanSport font).

Me and millions of other kids. The school backpack is as essential to education these days as textbooks or No. 2 pencils. And yet, that's a fairly recent development.

Turns out, Steve was right, as I found out when I started looking into backpacks for our Tools of the Trade series.

Ah, yes, the book strap. An ingenious contraption. But really, just a leather belt. I doubt you've ever seen one in use, but you've almost certainly seen them in the movies. You wrapped the strap around your books and carried the bundle like a bag or threw it over your shoulder.

Students found them useful in the early 1900s, but they eventually went out of style.

Then came that middle period — the one Steve talked about where kids just carried their books.

In other words: The backpack didn't evolve from the book strap. It came from a different world altogether. The world of the outdoors.

Gerry Cunningham, owner and creator of Gerry Outdoors in Boulder, Colo., is credited with the two biggest innovations that would, decades later, lead to the modern school backpack: the use of zippers and nylon for daypacks.

According to the company's website, Cunningham was an outdoor enthusiast unsatisfied with the rucksacks of his day. So in 1938, he made his own, with two zippered compartments for easy reach while rock climbing.

It sold well, and over the years Cunningham improved it. In 1967, Gerry's Teardrop Backpack made a big leap forward: nylon. Canvas had been the go-to fabric. Nylon was stronger, more durable and lighter. It quickly became the norm.

There was a lot of excitement about the outdoors around this time. Gear companies were popping up left and right, each seeking new and better equipment and clothing. Many of them are still around today: The North Face, Kelty, Patagonia.

Which brings us to Skip Yowell and his cousin Murray Pletz.

In 1967, they started an outdoor gear company in Seattle. The only problem: They needed somebody who could sew.

"Murray was dating this girl named Jan Lewis, and she had a home sewing machine," Yowell recalled recently. She also had a teaching degree, but there were too many teachers in Seattle at the time. They brought her aboard as a partner.

"Murray decided to take it one step further," Yowell said. "He told her, 'If you marry me, I'll name the company after you.' "

And JanSport was born.

One of the new company's first products was the Ski and Hike daypack, released in 1969. Yowell approached the typical vendors: ski and outdoor shops.

One of those shops was connected to the University of Washington bookstore, which was unusual for the time — and also fortuitous.

"Because it rained so much there," Yowell noticed, "the students started buying our packs to put their books in."

Books are heavy, though. Eventually, they made the bottom of the bags sturdier. "So we took some cheesy bus-seat vinyl and sewed it to the bottom."

The Ski and Hike sold like crazy. Other college bookstores began selling the packs too.

But the company didn't exploit the education market right away. At the time it had an even hotter product: the dome tent. You know, that tent. So the backpack was on the back burner.

They founded Caribou Mountaineering in 1974. At the time, Kirk was taking classes at Chico State on the GI Bill, and he couldn't find a pack that would hold all of his textbooks.

"He took a pile of his chemistry textbooks, wrapped some nylon fabric around them, stapled it together and said, 'Will you make a backpack for my books?' " Briggs recalls. It took her a few days. The new pack was called the Cricket.

Briggs took it to the bookstore at Chico State. "They just laughed at me," and told her: " 'We don't sell backpacks; we sell pencils and books.' "

So she made it easy on them. They agreed on a consignment deal. The store would only have to pay her for packs it actually sold. The first batch sold out.

Briggs quickly lined up university bookstores across the country.

Soon after, at a trade show, Briggs met Ned Kitchel, then a senior project manager at L.L. Bean.

Kitchel had been on the lookout for a daypack to hold textbooks ever since he received a suggestion letter from a Harvard Law student.

At his request, Briggs modified the Cricket to add a little more room on top — for your jacket or something — and brought it to him at L.L. Bean headquarters in Freeport, Maine.

He loved it. In 1982, the L.L. Bean catalogue featured the Book Pack, and it quickly became the company's top-selling product. "It just exploded," Kitchel recalls. "We were selling tens of thousands of them in almost no time."

While the Book Pack conquered the East Coast, Skip Yowell and his team were gearing up for heavy production back in Seattle.

"The outdoor market was becoming saturated," Yowell said. "We needed to move on to something a little different."

In 1984, JanSport released a new model, the Spring Break — the first one specifically for textbooks. It spread throughout the West as fast as L.L. Bean's was taking over in the East.

The rest is history. Within a few years, backpacks had gone from novelty to necessity. Competitors popped up, too.

By the late 1980s, nearly every kid walking to school was wearing a backpack. So the only thing left to do? Make the backpacks bigger!

Over the years the styles haven't changed much. A few adaptations here and there: Some for function, some for fashion. 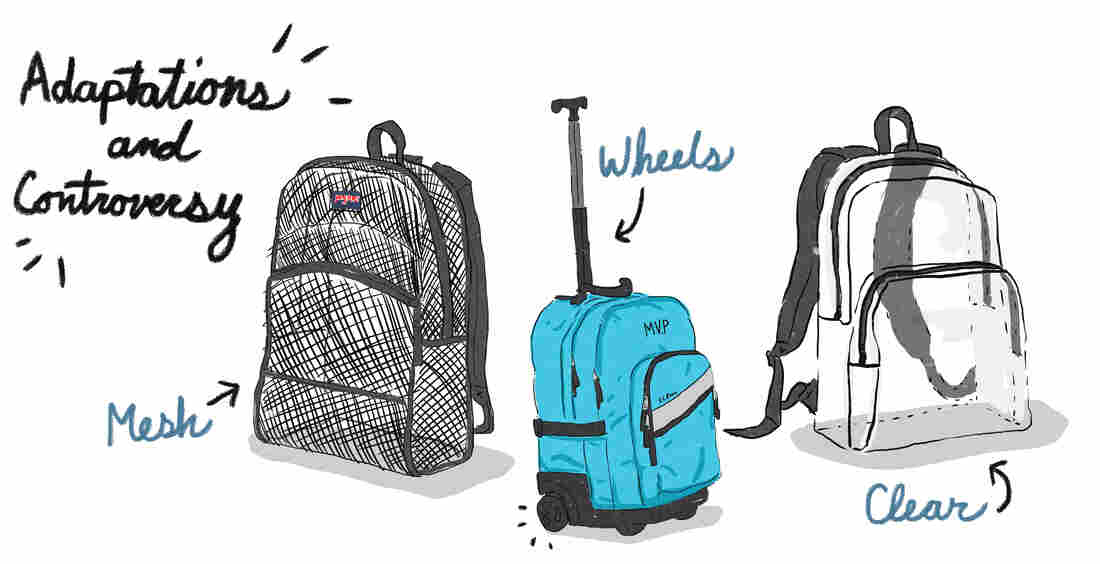 Of course, the school backpack has seen its troubles too, and even controversy.

You've probably seen articles about the health risks of kids weighed down by their backpacks. The American Chiropractic Association even wrote some guidelines to prevent "backpack misuse." Wheeled packs became a popular option in response.

There have been security concerns, too — that backpacks can be used to smuggle weapons or drugs. Administrators at a few schools have gone so far as to require clear or mesh backpacks. 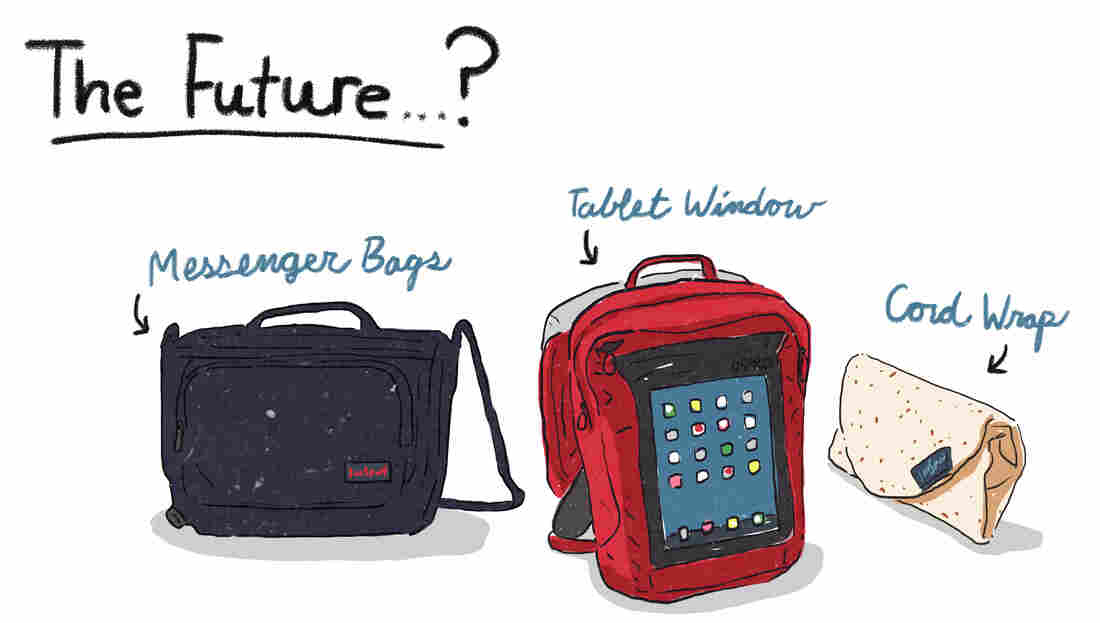 Now, there are concerns about the backpack's future. As textbooks give way to tablets and laptops, some have wondered if the traditional backpack is headed the way of the old leather book strap.

Companies are starting to rethink what today's students need.

Enter the Digital Burrito: JanSport's attempt to get ahead of the curve. This tortilla-shaped product wraps electronic cords neatly together. While another JanSport offering, the SuperBreak Sleeve, is a backpack but is super slim for holding your laptop.

For now, though, millions of kids still use the classic Book Pack and SuperBreak and many other models like them.

Not just in the U.S., but all over the world.

In an interview a few weeks ago, Skip Yowell told me: "Last year I traveled to Jakarta, Korea, Japan, Nicaragua, Indonesia, the Philippines, and I saw JanSport packs wherever I went." It made him smile: "You never get tired of it."

(Note: While I was reporting this story, Skip Yowell died at his home in Morland, Kan. At the end of our phone interview, he asked for my address so he could send me his book. I got it in the mail with a thoughtful and considerate note just days before he passed.)