Accessibility links
Does It Pay To Pay Teachers $100,000? : NPR Ed Once all but unattainable, a six-figure salary is a reality for a growing number of teachers.

We're brought up to believe our teachers are modern-day saints.

Just look at how we portray them in the movies and on TV. From Dead Poets Society's iconic Mr. Keating to resourceful LouAnne Johnson in Dangerous Minds, we reinforce time and again that teaching is a noble calling.

These teachers are heroes, we're told. It's hard to imagine them even thinking about money.

But their real-life counterparts aren't getting rich, either. The average pay for a teacher in the United States? About $56,000, usually higher in urban districts, lower in rural ones. Add the fact that salaries fell in recent years, and it's probably no surprise that more teachers are leaving the profession, with fewer entering it.

And yet, here and there, in a few places around the country, some teachers have attained what has long been considered a mark of success in this country: a six-figure salary. 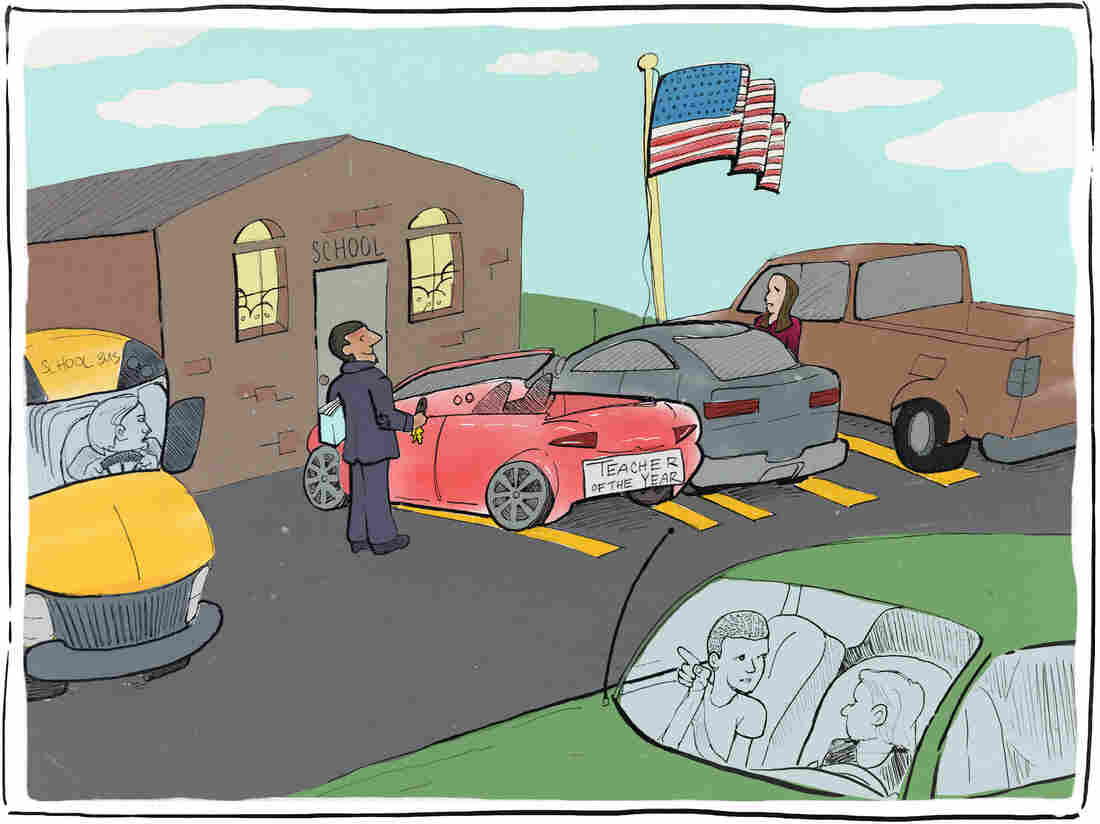 Once all but unattainable, a six-figure salary is a reality for a growing number of teachers. Ryan Schuette/NPR hide caption 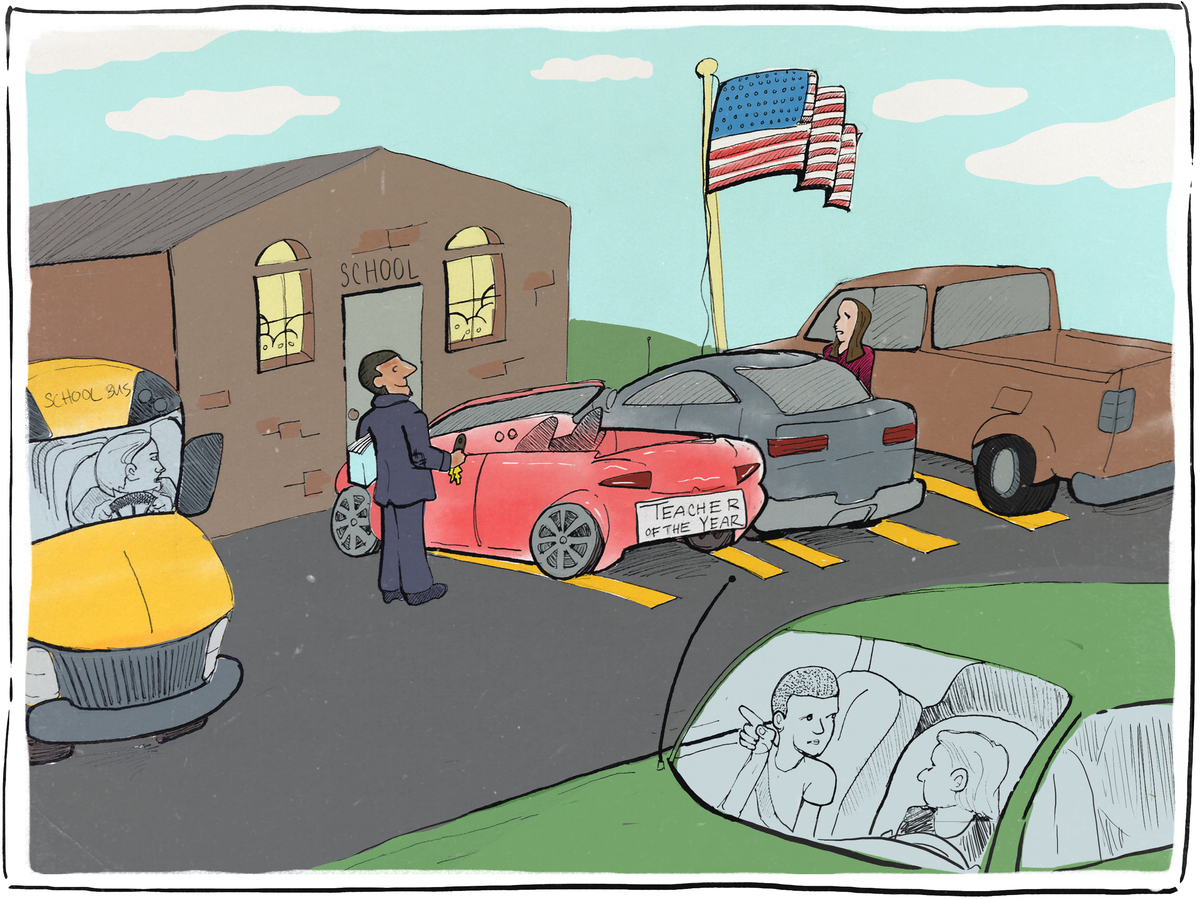 Once all but unattainable, a six-figure salary is a reality for a growing number of teachers.

One place you can find them is Washington, D.C. After 14 years teaching in the nation's capital, Hope Harrod is closing in on that magic number.

"I didn't expect to make the kind of money I'm making now," she says.

These days, paying teachers that much is "unusual, but not rare," says Dick Startz, an economist with the University of California, Santa Barbara. And it's becoming less rare every day.

The teacher shortages and pipeline problems are leading some school districts back to the drawing board — or chalkboard, rather. And increasingly, one of the things on the table is higher pay — even six figures.

In most places, reaching that magic number still means getting there the old-fashioned way — with a master's degree and 10 or 20 years on the job. And in places like New York state, salaries are given a hefty boost simply because the cost of living is higher, too.

So what's new? A growing number of districts are looking to change that pay structure. The goal: Give teachers, even younger teachers, the chance to earn more. Reward them not for seniority or advanced degrees, but for how well they teach.

Startz called these strides a "very small step" in the right direction. "If we want a large set of people to do a job relatively well, we have to pay them relatively well," he said.

'It's A Really Good Feeling'

Until a few years ago, Hope Harrod made better than the national average for a teacher, but nowhere near six figures. The 40-year-old educator, who teaches fourth- and fifth-graders at John Burroughs Elementary School in Washington, says that changed in 2010. That was the year Michelle Rhee, then the city's schools chancellor, upended teacher compensation in the nation's capital.

Rather than advance teachers solely on the basis of seniority or education, the city school system rewards performance, with an evaluation system that involves classroom observations, test scores and other criteria.

Not that she teaches for the money: "I love watching kids move through their thinking," she told us. "I love to hear them talk to each other about the ideas that they have."

Still, she says, recognition matters. "I feel like I'm very much in a system that's honoring me in a way that other systems don't honor other teachers," she said.

She doesn't use that salary to buy a Mercedes-Benz or a home near Embassy Row. Instead, she said, she uses it to put away money for savings and help give her dad a more comfortable retirement.

And, as with many other teachers, some of it goes right back into her job so that Harrod can help her students.

"Now I can spend money on my classroom and do that without worrying about bills for the rest of my life," she added. "It's a really good feeling."

Where Other Teachers Can Make Six Figures

This year, 765 teachers in the D.C. schools earned $100,000 or more, including bonuses. The salaries stem from a program called Impact Plus that Rhee negotiated with teachers' unions.

Essentially, the contract was a trade: more money for important concessions. Teachers agreed to competitive performance evaluations and the loss of tenure protections in return for the chance to increase their base salaries and receive bonuses.

"We were trying to do something that had never been done before," Rhee explained in a recent phone interview.

Half a decade later, more districts around the country are considering or adopting performance pay. In February, the Center for American Progress, a left-leaning think tank, identified 10 school districts revising their pay schedules and boosting teacher pay.

So, if the benefits of paying teachers more seem straightforward, why isn't the six-figure salary — the one that doesn't take three decades to earn — catching on in most other communities?

For one, the issue may be wading into performance pay, a sticky subject for those who feel evaluations could be unfair to teachers or make schools themselves more competitive.

Diane Ravitch, a New York University professor and longtime critic of Rhee and performance pay, said the trade-off simply isn't worth it for most districts.

"Teachers always want more pay," she said, adding that she feels "it's most important where kids are poorest and neediest."

Even Rhee cautions against a cookie-cutter approach. Not all school districts are created equal, she said, and officials need to conduct evaluations and consider issues of pay and performance carefully.

Higher pay isn't "the end-all, be-all" for teachers, Rhee said. "But it is one way that makes them feel really good about the work they're doing and helps them feel valued."