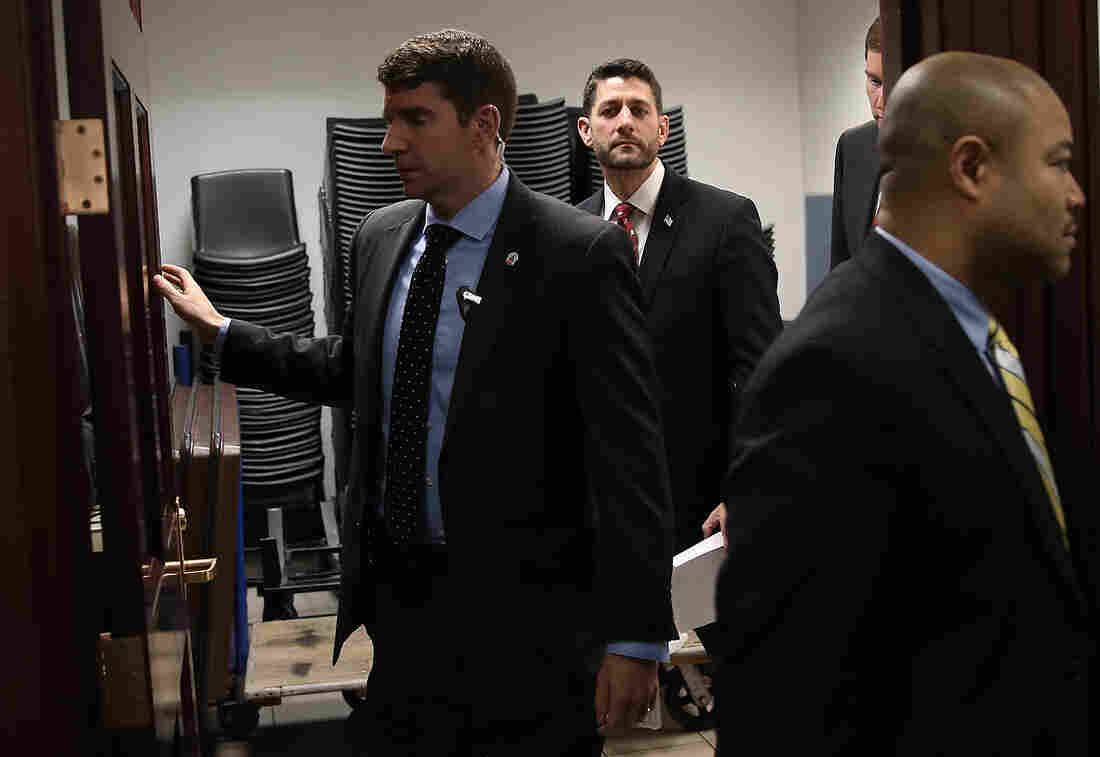 House Speaker Paul Ryan leaves a meeting of the House Republican conference at the U.S. Capitol. The House of Representatives is expected to vote soon on a rewrite of the No Child Left Behind Act. Win McNamee/Getty Images hide caption 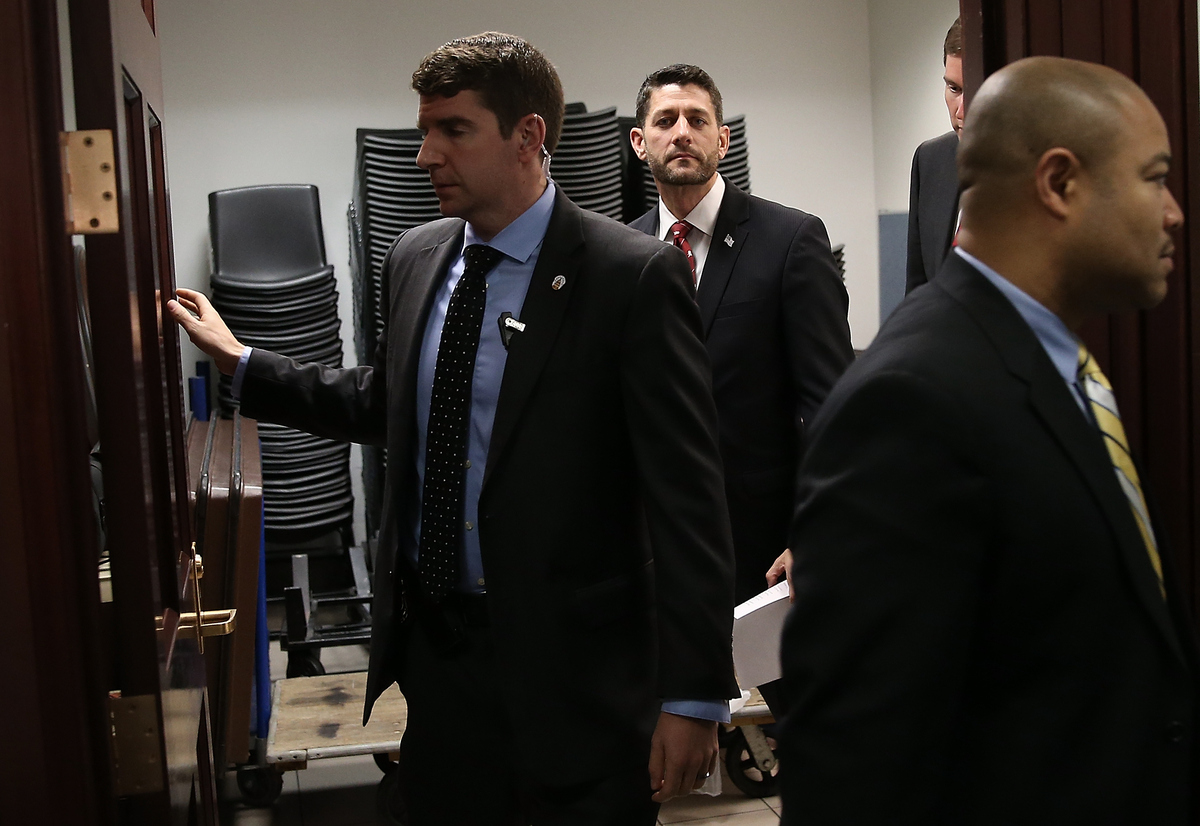 House Speaker Paul Ryan leaves a meeting of the House Republican conference at the U.S. Capitol. The House of Representatives is expected to vote soon on a rewrite of the No Child Left Behind Act.

It's almost a decade overdue, but the U.S. House of Representatives is scheduled to vote later today on a bill to replace the No Child Left Behind law.

Since NCLB was signed by President George W. Bush in early 2002, the federal government has played a major role in telling states how to run — and reform — their schools. But this new bill signals a sea change in the federal approach.

Annual tests in math and reading, the centerpiece of the old law, would remain in place. But the consequences of those test scores would no longer be dictated by the federal government. The new law, known as the Every Student Succeeds Act, significantly shifts responsibility for improving schools back to the states.

But the new bill has no single definition of proficiency like NCLB's much-maligned "adequate yearly progress." Instead, each state would come up with its own deadlines for schools to improve, its own methods of improvement, and its own metrics to measure that improvement.

Those metrics would include test scores, of course, but could also incorporate graduation rates, attendance, behavior, surveys of student engagement (as California's CORE districts are currently trying) and student work like projects and presentations (as New Hampshire is piloting).

If you've got a few free hours, here's the bill itself. For more of our coverage of NCLB and ESSA, see below.

Goodbye, No Child Left Behind

Goodbye, No Child Left Behind 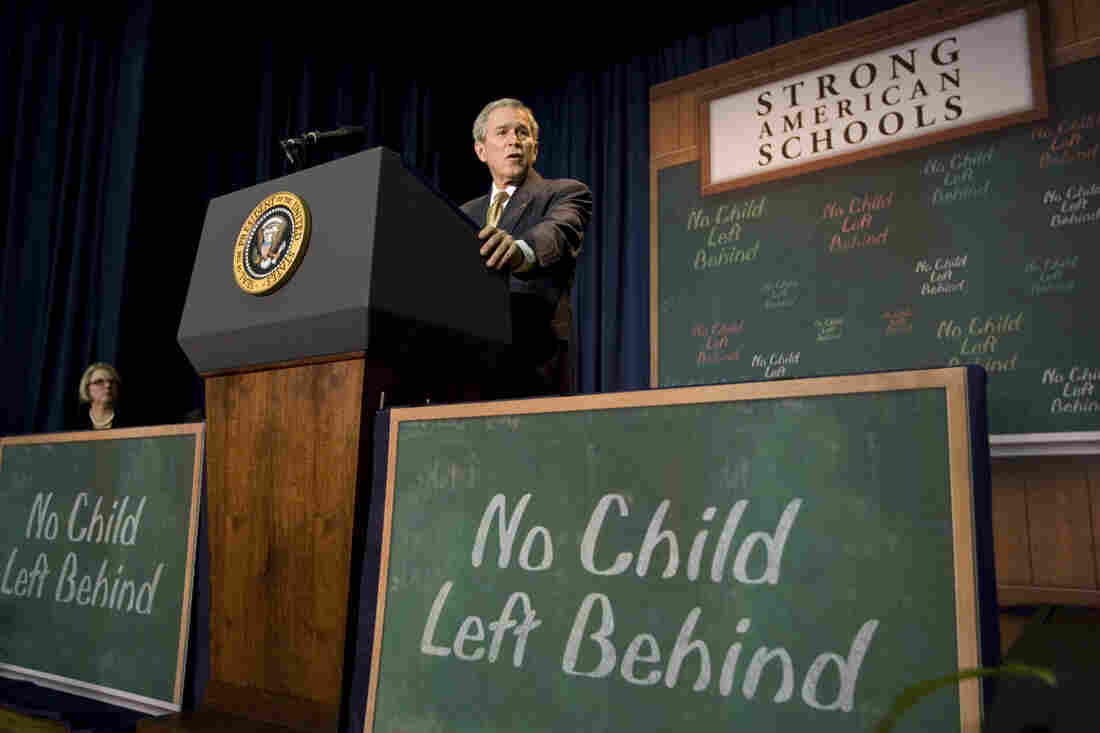 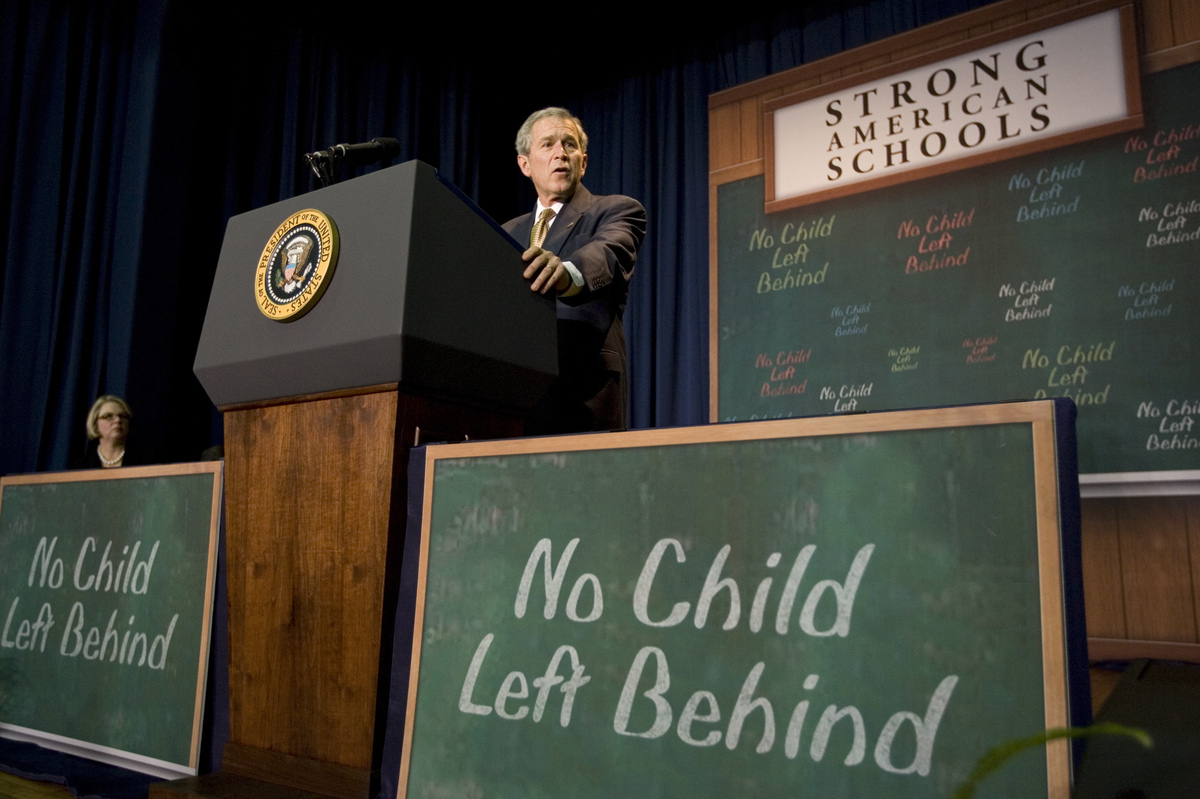 In 2008, President George W. Bush addressed his No Child Left Behind act. Congress now appears ready to overhaul the law, which is the nation's most important federal education act.

After a long stalemate, a bipartisan team of congressional negotiators has agreed to overhaul the Elementary and Secondary Education Act. The law, currently known as No Child Left Behind, sends roughly $14 billion a year to schools that serve mostly low-income students.

Here's what we know about the rough agreement. First, annual testing — a major feature of NCLB — would remain for grades three through eight and at least once in high school. Schools would still have to test 95 percent of their students and report the results by race, income and special need.

"It is the mechanism that brought to light how children in subgroups — I'm talking about Latinos, African-Americans, children in poverty, limited English-proficient children — how they're doing."

As for what would change, the U.S. education secretary could no longer push for academic standards like the Common Core or mandate that teachers be evaluated based on things like student test scores.

But the biggest change lawmakers are proposing is this: They want the federal government out of the business of identifying failing schools, leaving that tough job to states. Each state would come up with its own plan to help schools improve, its own deadlines and its own metrics to measure that improvement. If schools don't improve, states would have to figure out what to do.

Under NCLB, the federal government has had a big role in all of that, and some lawmakers and advocates worry that this overhaul could move too far in the opposite direction, dramatically weakening the law's protection of poor and minority students. At a recent meeting with civil rights groups on Capitol Hill, Democratic Sen. Elizabeth Warren of Massachusetts sounded anxious.

"The idea that we would pass a major piece of legislation about education and, in effect, shovel money into states and say, 'Do with it what you want', and not have some accountability for how that money is spent, I think, is appalling," Warren said.

Sen. Lamar Alexander, a Republican from Tennessee and one of the architects of the law's rewrite, has dismissed this concern. He declined to be interviewed for this story but sent NPR a statement saying he disagrees with groups "who believe that the path to higher standards, better teaching and real accountability is through Washington instead of states."

But Daria Hall, with the advocacy group The Education Trust, says that, historically, "states have not made decisions with the best interest of vulnerable kids in mind."

Hall says, when given the opportunity, states still find ways to camouflage the fact that most of their low-income, black and Latino students don't get a quality education. As evidence, she points to the most recent reading and math scores from the so-called "Nation's Report Card."

"Those kids are losing ground," Hall says. "And yet, we're telling parents and the public this is an A school when the reality is it's doing C work or maybe D work. That's why we need a continued federal role in education."

How significant a role is the question. Ted Shaw, former head of the NAACP's Legal Defense and Education Fund, says that, without the federal government as a watchdog, it'll be up to states to take the lead in tackling the biggest problem of all — the concentration of poor and minority children in failing schools.

"This is one of the most important issues our nation faces when we talk about educational opportunity," Shaw says. "Concentrated poverty is deadly, and we're not paying enough attention to it."

A compromise bill will soon move to the full House and Senate before it can make its way to President Obama.