Accessibility links
What's Next For 2 Seniors Wrapping Up At A Big State University? : NPR Ed One, newly graduated from the University of Maryland, settles into a sometimes-daunting job hunt, while the other prepares grad school applications.

The Value Of A College Education 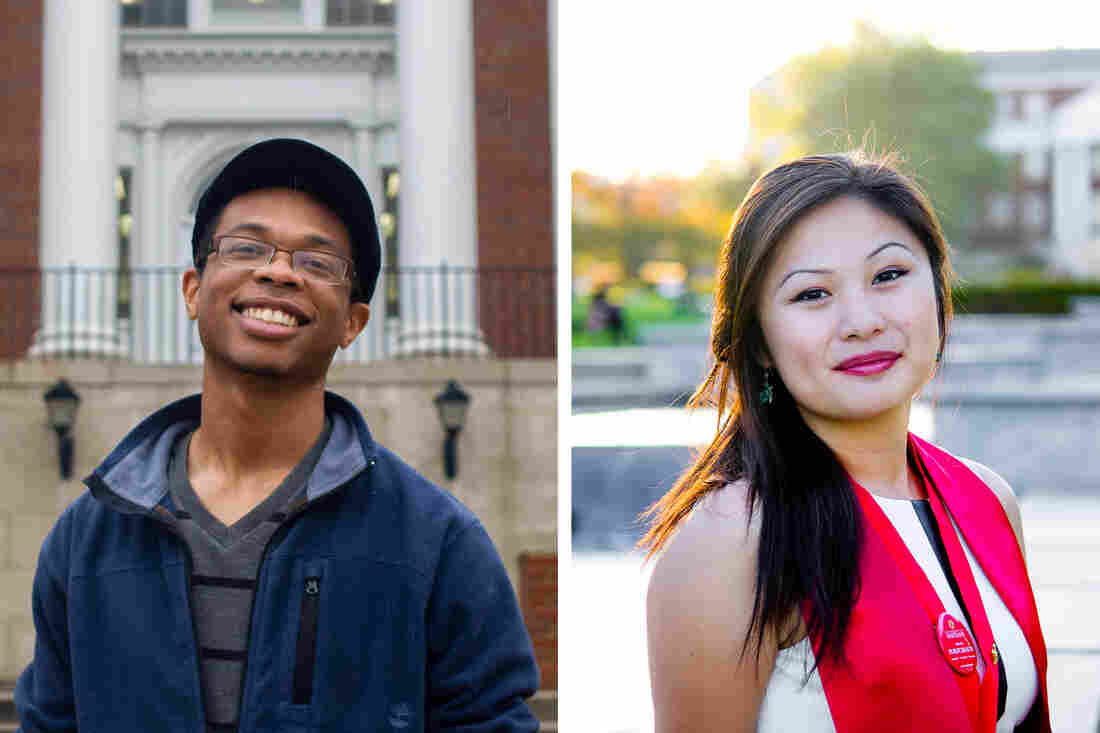 Rhys Hall and Karie Cheung are both seniors in college. They spoke with NPR about their experiences at The University of Maryland. Kwame Abrah for NPR hide caption 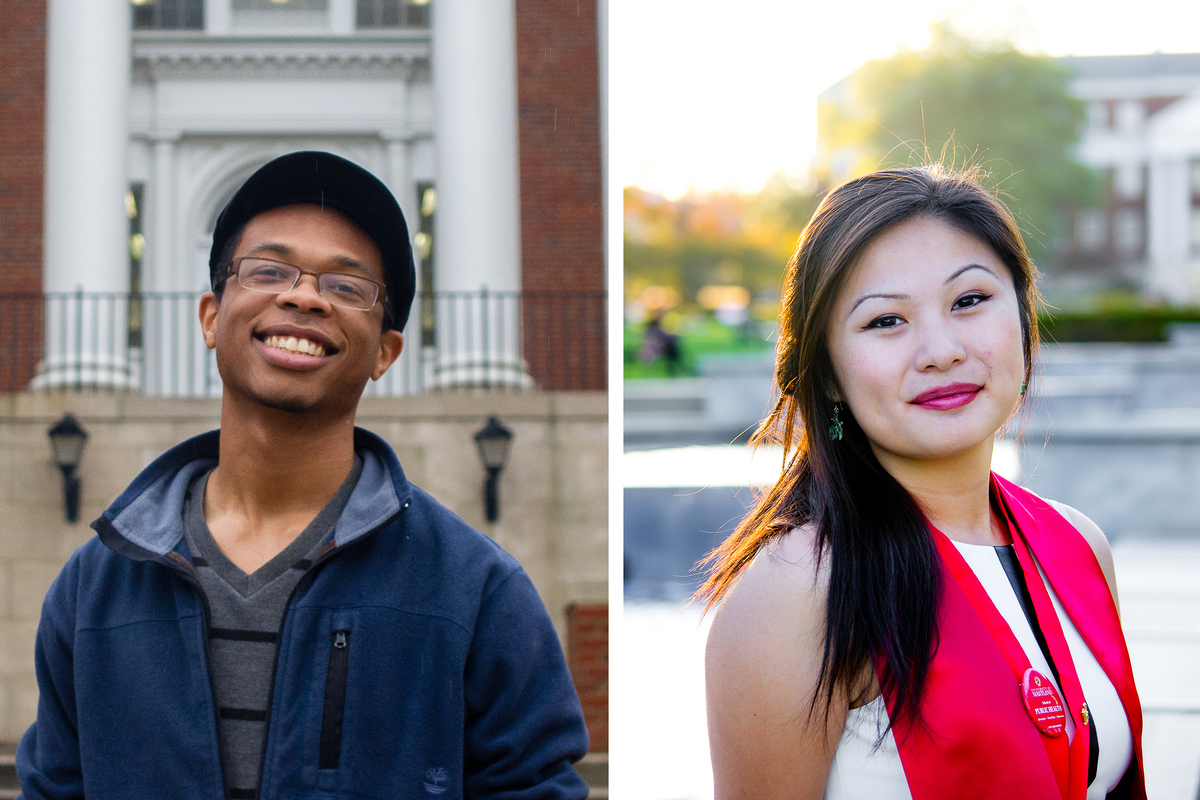 Rhys Hall and Karie Cheung are both seniors in college. They spoke with NPR about their experiences at The University of Maryland.

Going to college today is a very different experience than it once was. The cost has soared, and the great recession cut into many of the assets that were supposed to pay for it. This week All Things Considered is talking with young people about the value of school and about their choice of college.

What do you get from a college education? And, given today's eye-popping costs, is it worth it? We're following a group of college seniors through this academic year and asking them those questions.

The Quintessential College Experience, Without The Big Bills

At the University of Maryland's College Park campus, just outside Washington, D.C., we caught up with two of the seniors we met last September: Rhys Hall and Karie Cheung. Like all the students we're following, they are both from Montgomery County, Md., just outside Washington, D.C. As two undergraduates among 27,000 students, they had never met. So, we introduced them.

Rhys Hall will be the first college graduate in his family after the spring semester. He's African-American and the son of a single mother, a sociology major and very active in campus affairs. 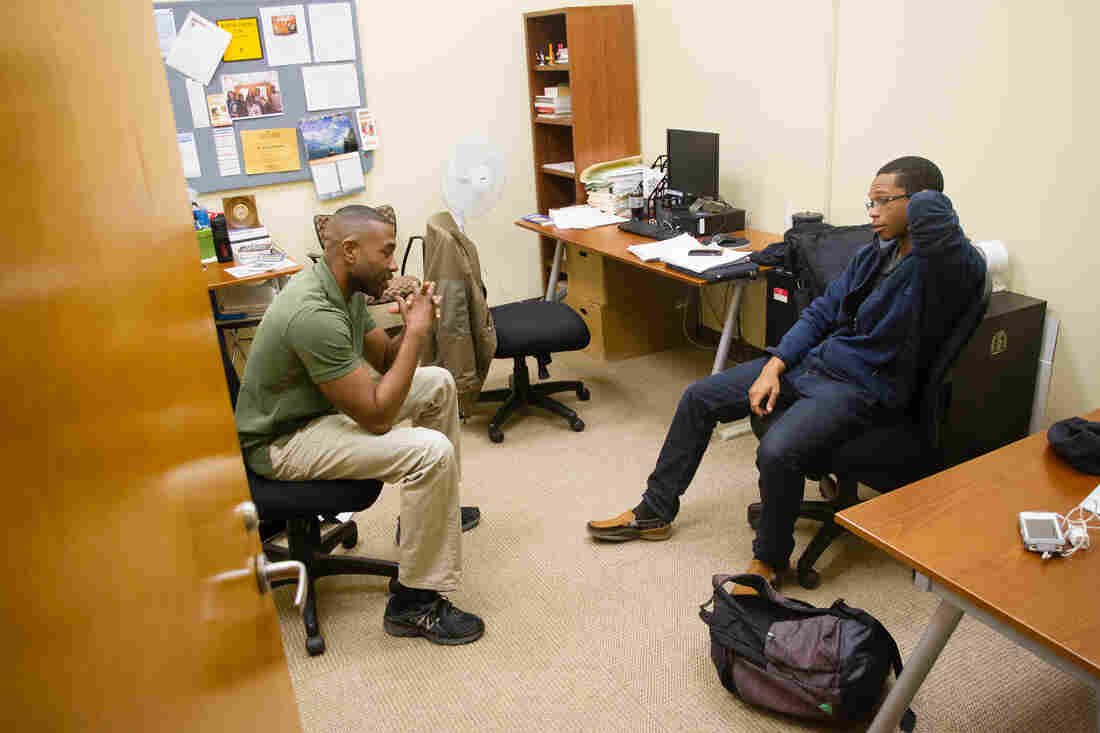 Rhys Hall talks with Jason Nichols, a professor of African American Studies at the University of Maryland. Kwame Abrah for NPR hide caption 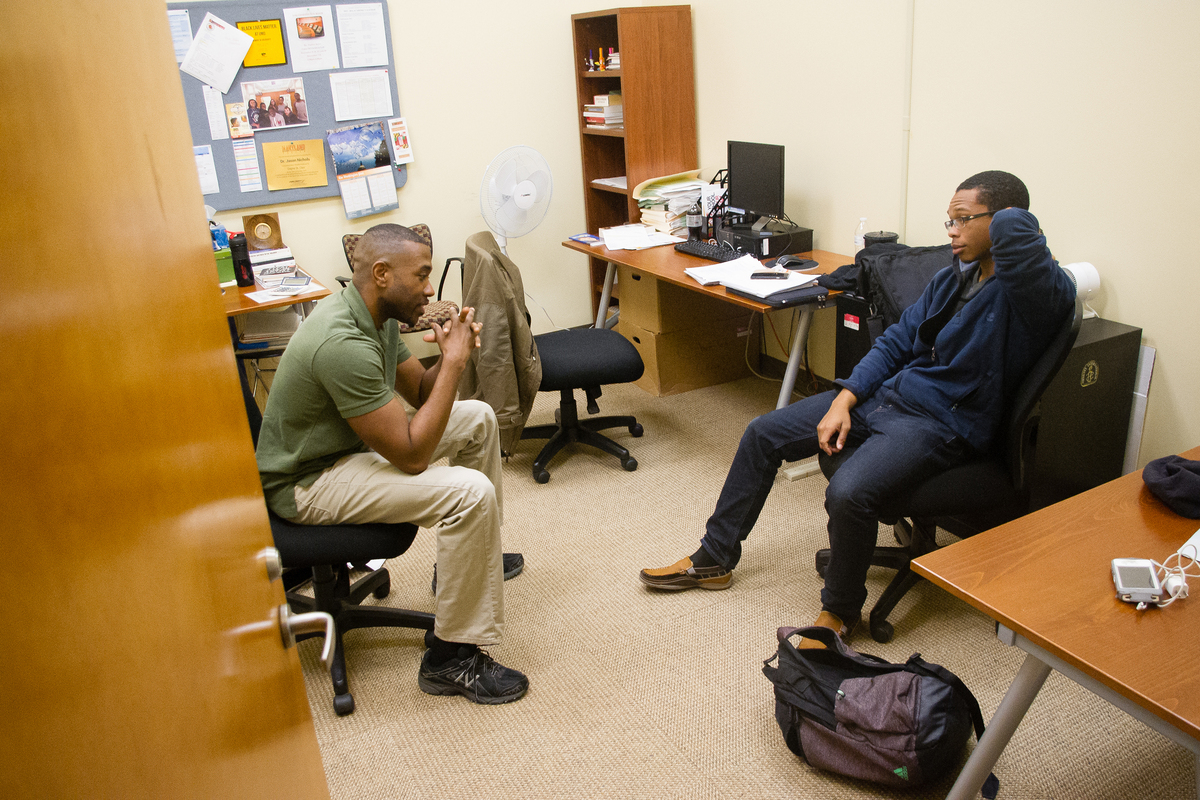 Rhys Hall talks with Jason Nichols, a professor of African American Studies at the University of Maryland.

Karie Cheung graduated last week, at the end of the fall semester. She's the daughter of Chinese immigrants and the first in her family to go to college. Her major is community health and this past semester she spent most of her time doing an internship. She also had a job on campus to help pay for college.

And she has spent a lot of time looking for her first job after college: "Actually, the other day," says Cheung, "I found a social media job that required seven years of experience. And you know, social media kind of, barely, didn't really exist seven years ago."

Hall has ambitions of earning a Ph.D. and has been preparing graduate school applications to several universities.

"I'd like to come back to Maryland," he says. "If I do, I'd probably consider American studies, as opposed to sociology." For every other school, Hall is applying to sociology departments. 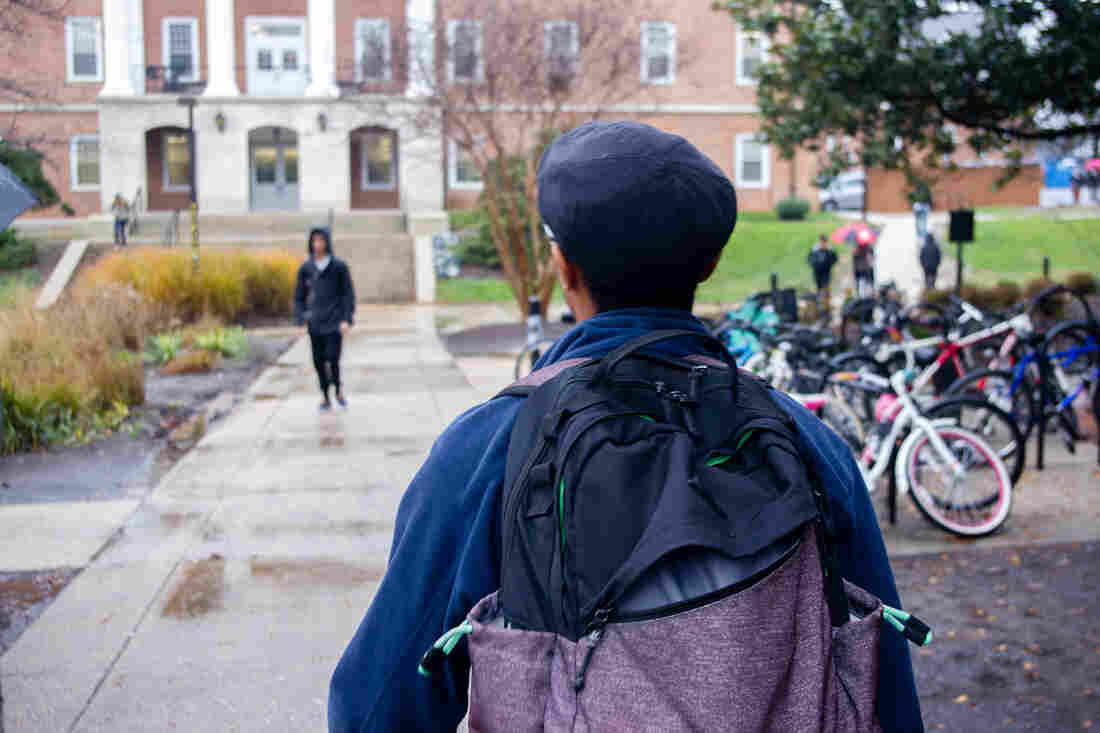 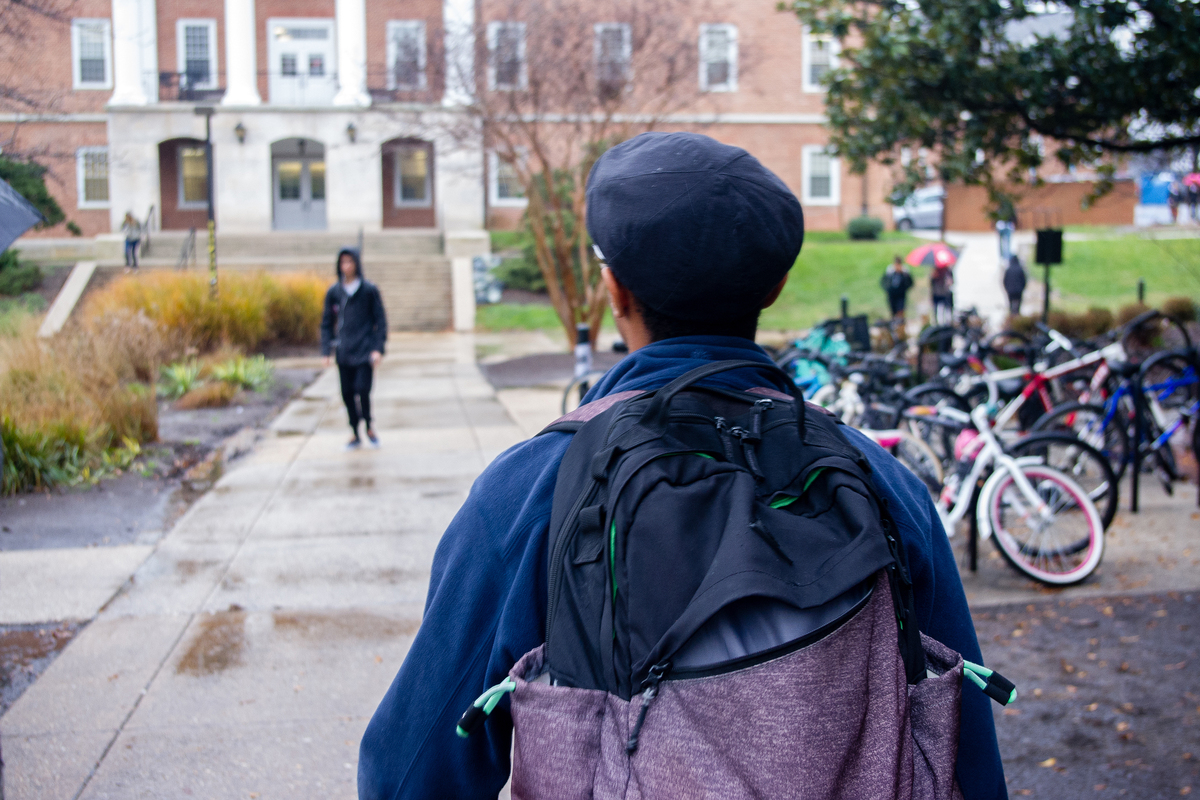 Hall relished studying at what he calls a "Research I" university — a category (now officially called RU/VH) made by the Carnegie Foundation for the Advancement of Teaching to indicate institutions with a very high level of research activity. There, he saw the "impact that being the creator of knowledge can have for the next generation."

"Being able to work with the faculty here has shown me that you can have a consultant position, you can work at a think tank, you can write for a paper or you can go into academia and actually be a professor."

Hall's goal is to become a research-based professor at a research intensive institution.

Cheung started her job search in places like Seattle. But reality quickly set in. "The more planning I did, the more I realized that was only a dream, for now," she says. "Right now I really need to focus on what is feasible financially." 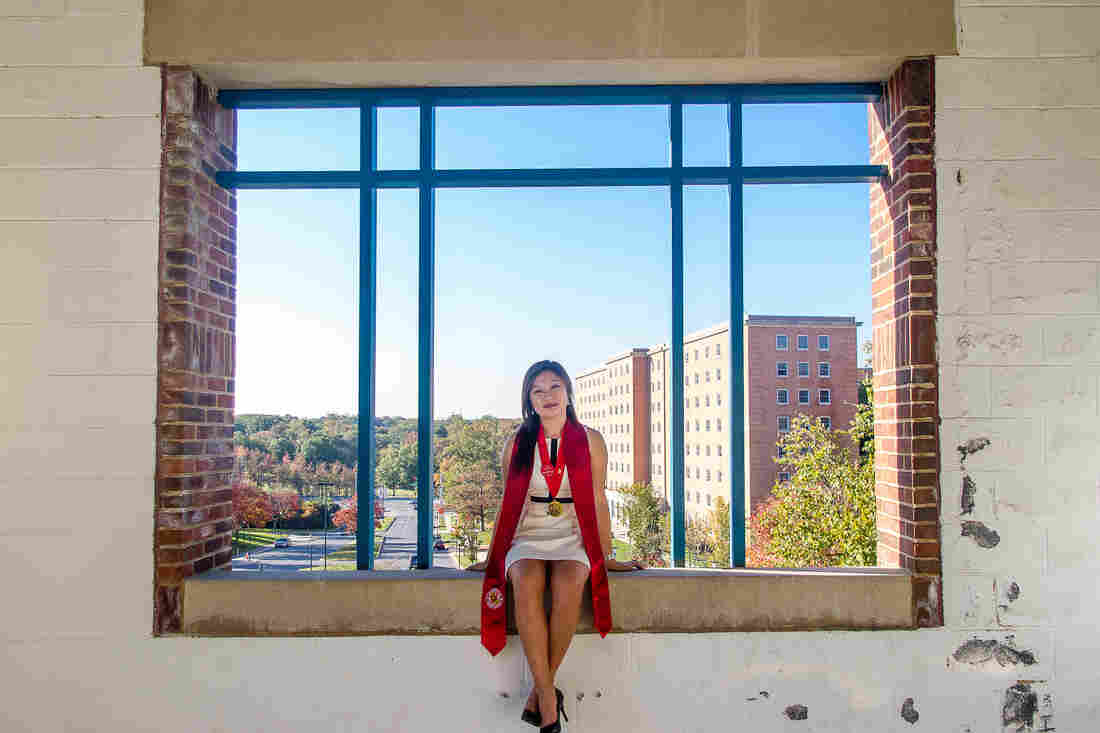 Karie Cheung poses for a graduation portrait at the University of Maryland in College Park, Md. Kwame Abrah for NPR hide caption 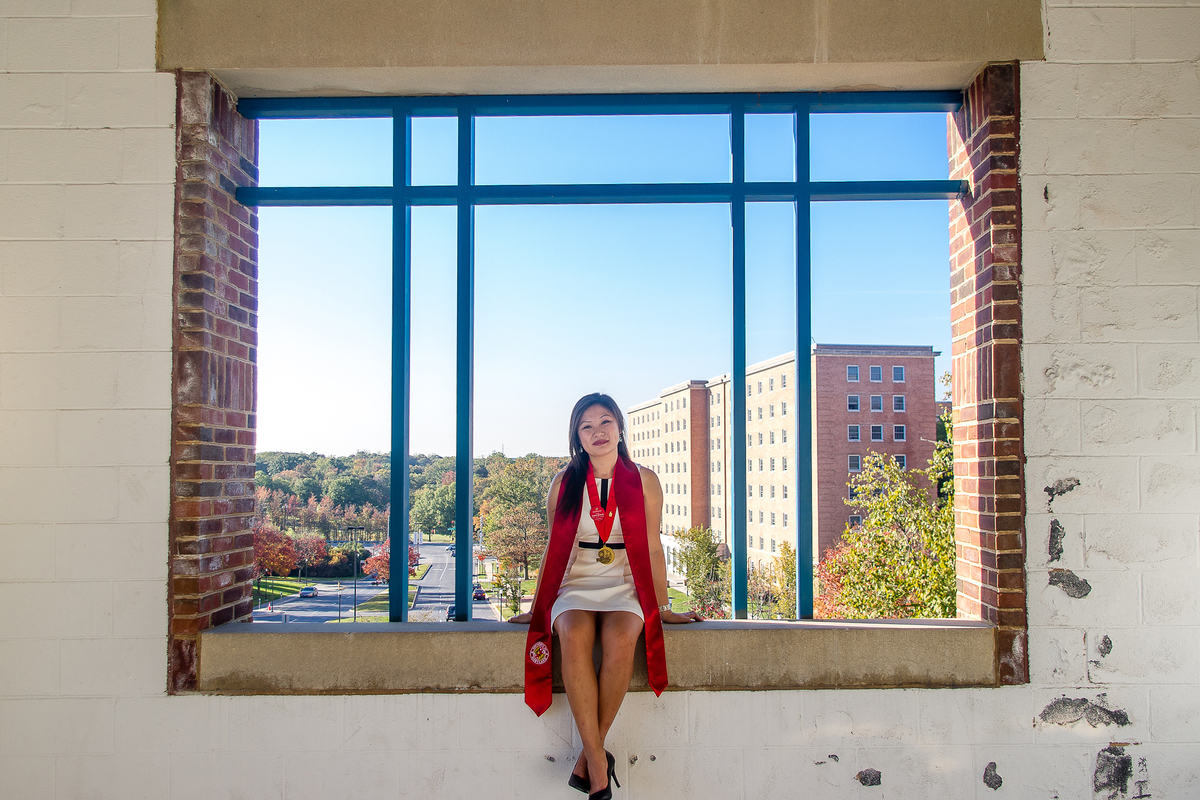 Karie Cheung poses for a graduation portrait at the University of Maryland in College Park, Md.

So she has limited her job search to the "DMV" area: D.C., Maryland and Virginia. It hasn't been easy.

"A lot of entry-level jobs, they're really tricky," she explains. They tell you that you need at least two or three years of experience, but you can't gain that experience unless you are at an entry-level job."

She says one must be organized and "love colors" to find a job: "Your Excel spreadsheet will look very colorful."

"Keep in the back of your mind, that as much as you're involved here," says Cheung, "you do have a life after college. In order to have that life be successful, you have to start preparing for it now in college."

We'll continue to check in with these students, plus the other students we met last September, as the week and the year continue.

This week, we're talking to students who went to high school in Montgomery County, Md., just outside Washington, D.C. It's considerably more diverse than the rest of the nation: Nearly one-third of its residents are foreign-born. It's also more highly educated: with more than double the national average for bachelor's degrees.