Accessibility links
Teaching Grit On The Water: A Top Coach Mixes Rowing With Life : NPR Ed For more than a decade, a rowing coach in Oregon has been teaching teenagers the value of hard work with tough love that sticks. 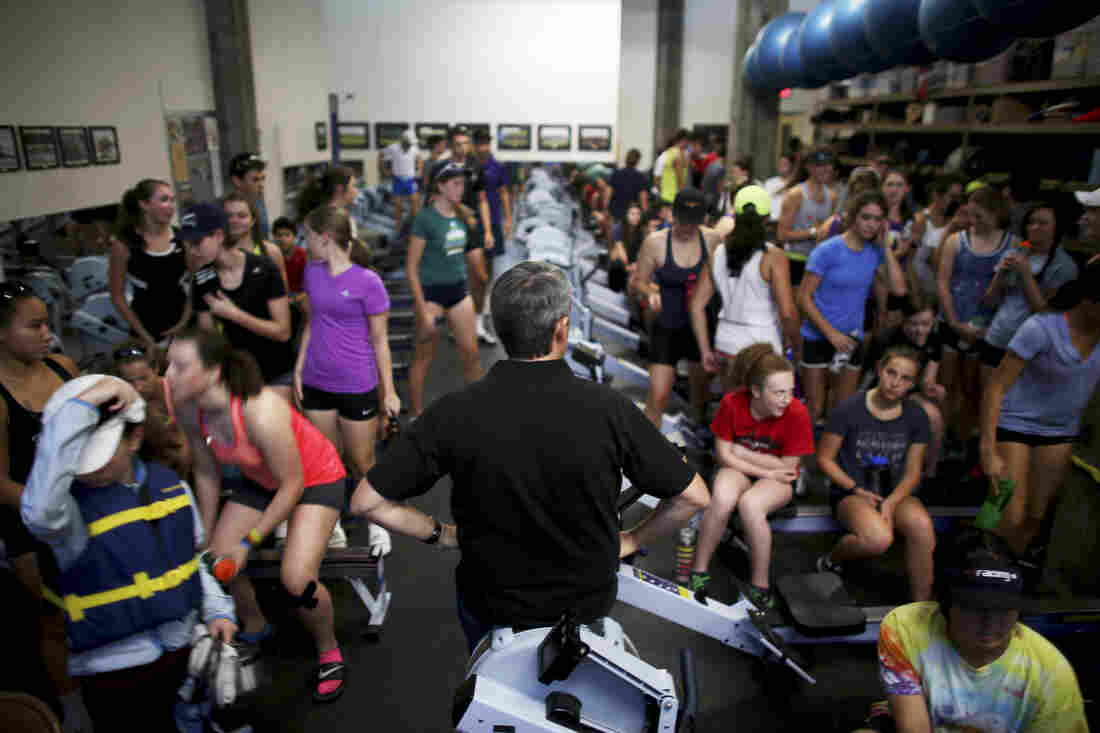 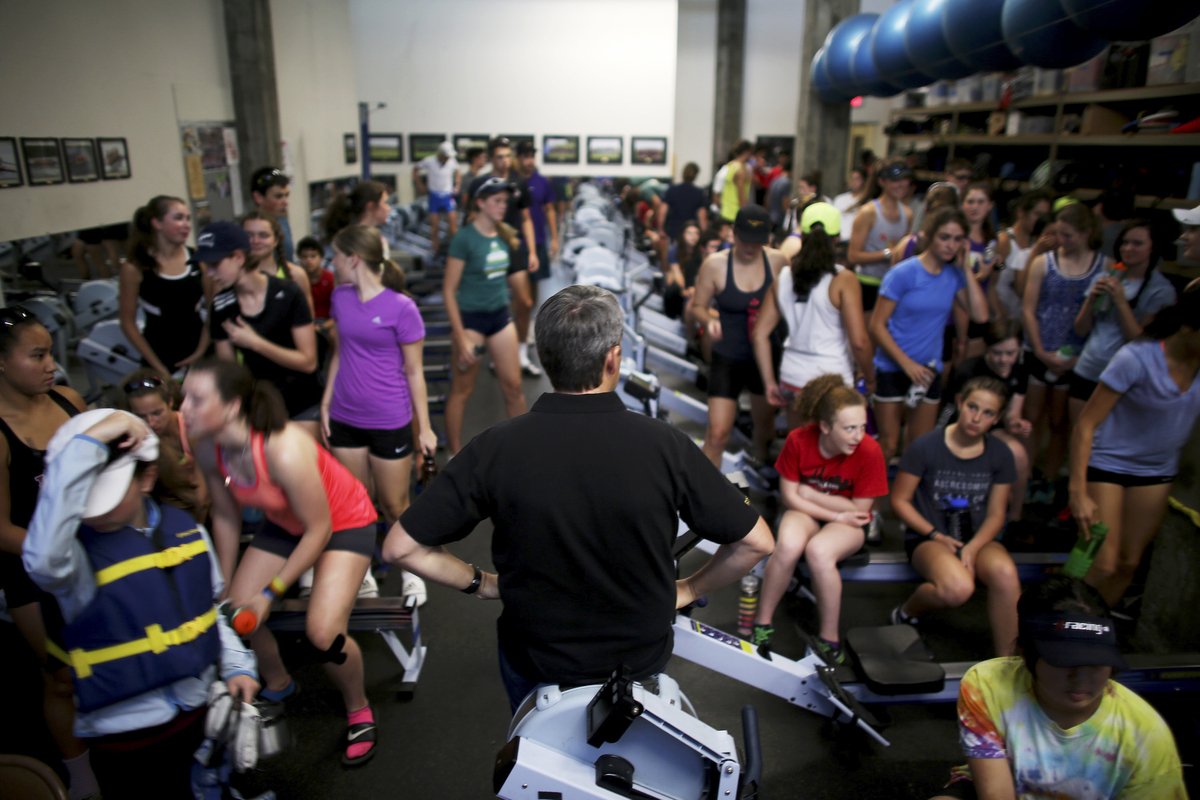 The education at the Rose City Rowing Club starts long before oars touch the water. The first lesson from head coach Nick Haley is about punctuality.

Afternoon practice begins at 4 o'clock sharp at this club in Portland, Ore.

The next lesson is about respect. This one's a big deal at Rose City: Respect your fellow teammates, coaches, the sport itself and — today in particular — the equipment. 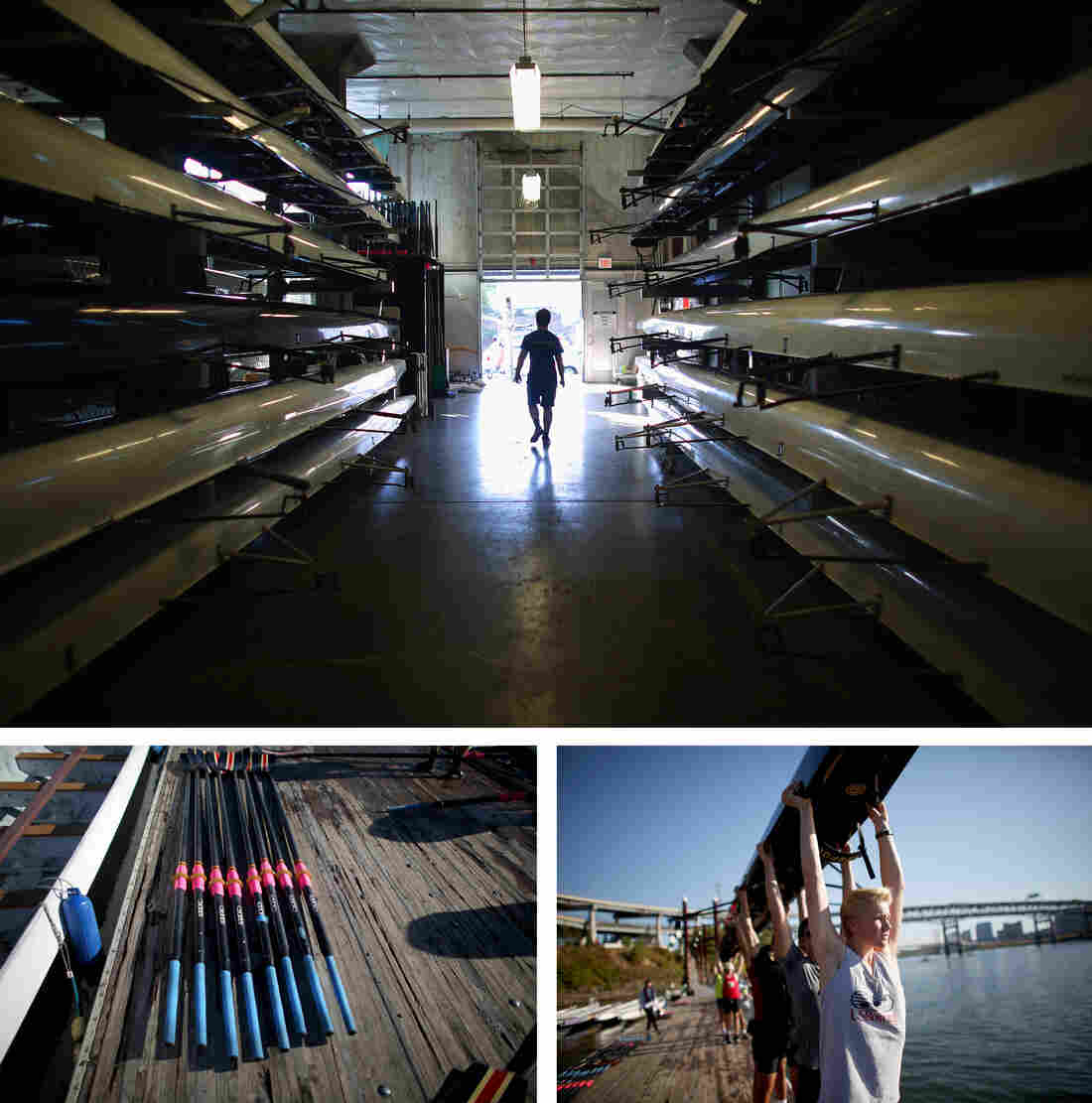 Haley is speaking to more than 100 high school students gathered before him. He notes that several of the club's big boats — they're called Racing Eights — are being repaired because some of the kids carelessly banged them together.

He tells them their goal is to "try and eliminate silly mistakes," and Haley gives them a chance to do just that. After the talk, several rowers carefully guide a rack of boats outside.

"That is trust," says Haley. It's not just that the boats need to be cared for. It's also about money. The students, Haley says, are wheeling $20,000 out the door.

The students transport them safely to Portland's Willamette River, where Haley will do his coaching from a launch — a small, open motorboat. 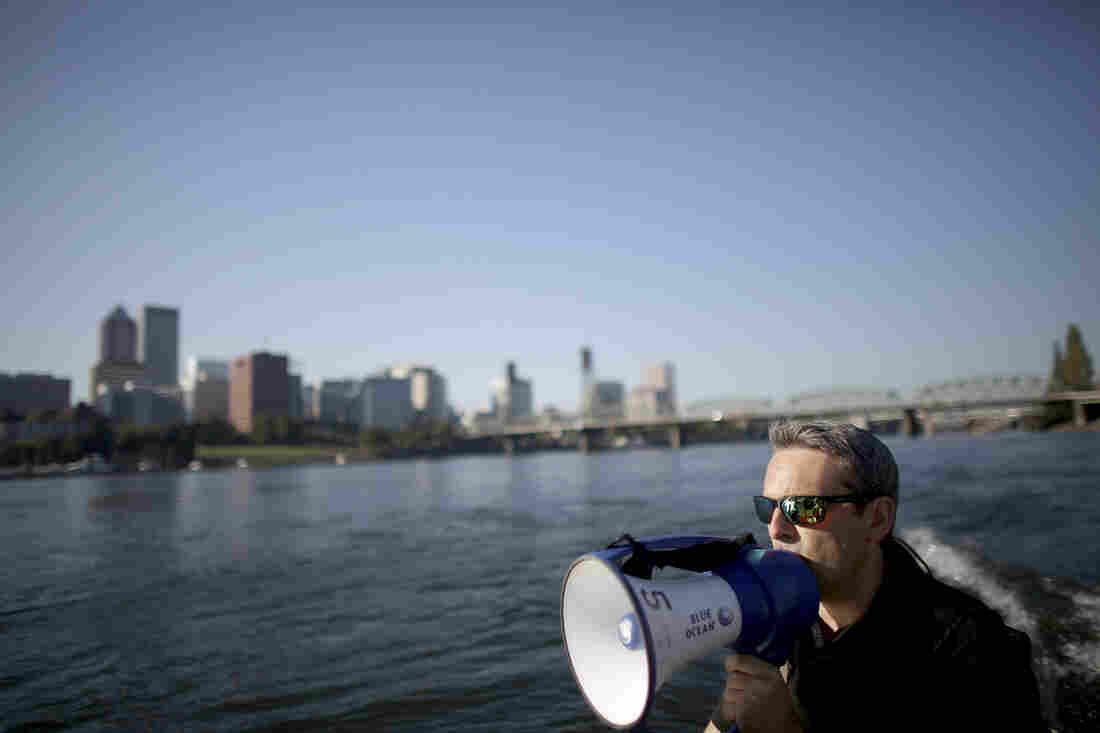 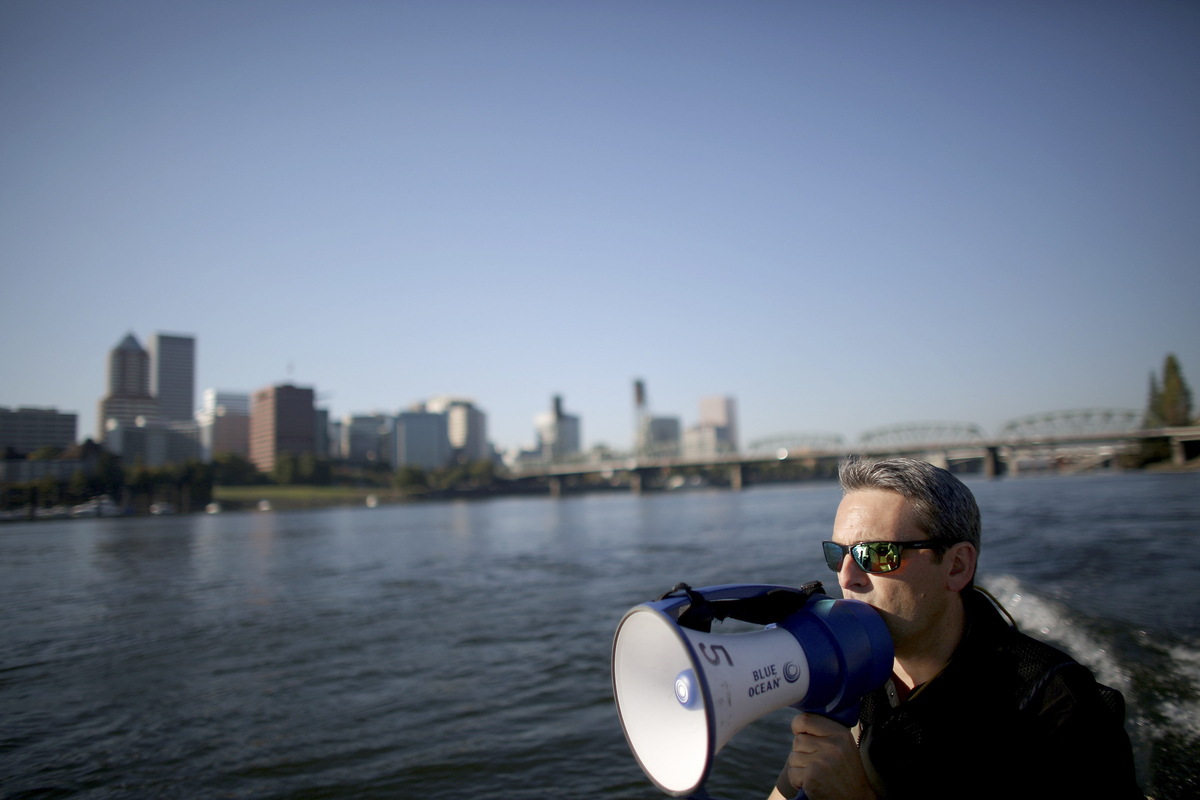 Haley on the Willamette River.

He stands, 5 feet, 8 inches tall, wrapped in a vortex jacket, with the wheel in one hand and a bullhorn in the other. Early in the practice, he pulls up next to the varsity girls' Racing Eight, where several rowers are struggling to get their oar blades out of the water cleanly.

Haley, sounding like a hypnotist, has them row with their eyes closed.

"All right, imagine it is coming out perfectly clean," he says. "Breathe. Confidence."

He is paying close attention to this boat. In a few days, he will travel with these girls to Boston for the celebrated Head Of The Charles Regatta. But he knows that prepping for the world-class event requires more than hypnotic rowing exercises.

They are racing now, against several of Rose City's boys' boats. In between the practice races, the girls' chests heave. Their faces turn red. Haley, bobbing next to them in his launch, explains why pain and discomfort are good.

"We have to practice sticking our neck out physically. We have to do that today," he says. "The upside to doing that is you're going to have confidence at the starting line in Boston that physically you can do it."

Many of the lessons 45-year-old Haley teaches on the Willamette are lessons he learned long ago on the fabled Thames River in England. When Haley was a teenager, he went to school in London. Rowing practice back then often meant exploring the river alone. 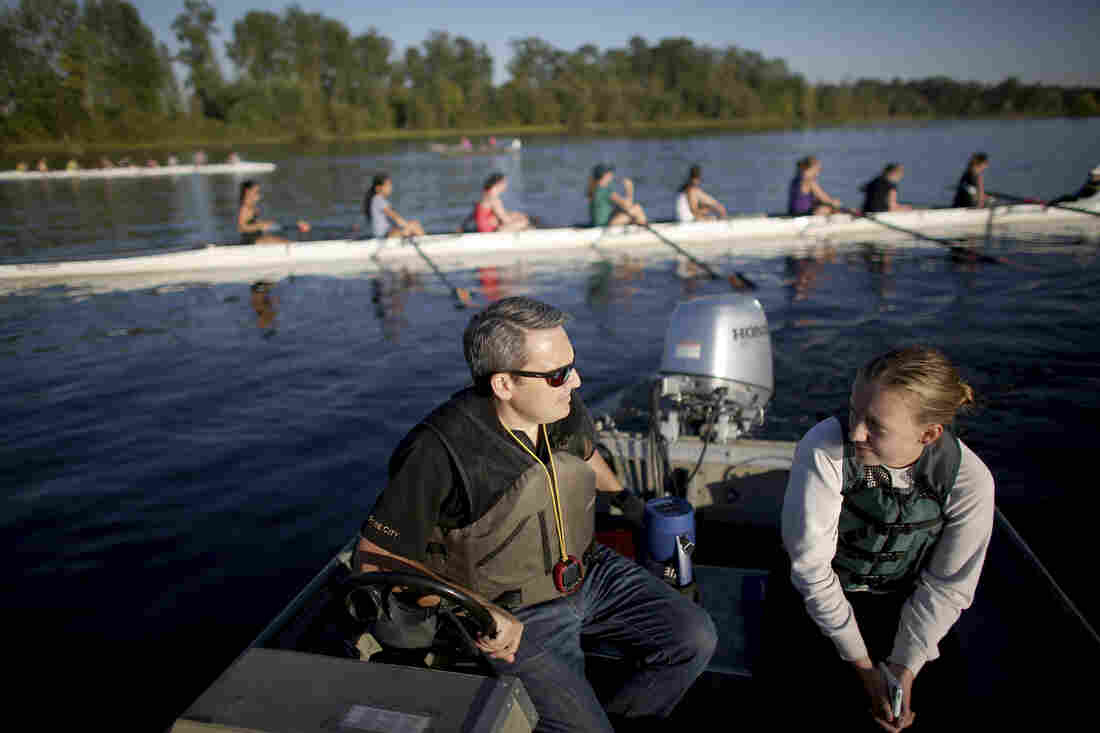 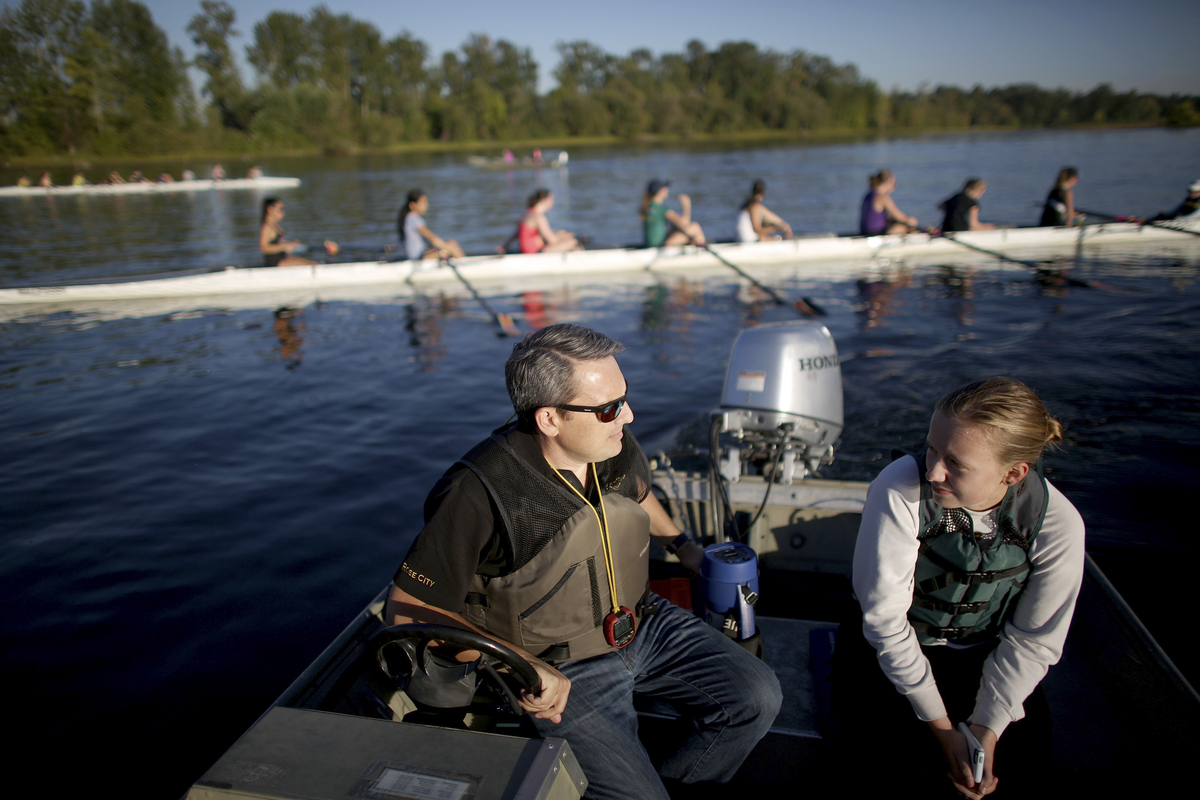 Haley and a student share a moment during practice.

"I was allowed to develop a love of rowing in a kind of organic way. It wasn't a factory," he says. "We weren't just churning it out to get medals, so I think I was imbued with a real deep love of the sport."

It's been 11 years since Haley started Rose City Rowing, a nonprofit that pays him about $50,000 a year, with no health benefits, for a job he does at least six days a week, 12 hours a day. The passion he discovered on the Thames fuels his nonstop schedule. He tries to instill that in his athletes, not just by imparting wisdom but by making them active participants in the experience.

He tells his rowers that they decide how much pain they can tolerate. He tells them that trading late nights with friends for 5 a.m. practices is not a sacrifice, it's a choice.

Those lessons can linger past sunrise. Take 22-year-old Gregor Dierks, a former Rose City teammate, who rowed at Boston University.

"Rowing is one of those sports where you really see what you're made of," he says. "You really find new depths to yourself."

Dierks is now back in Portland as an assistant coach for the club. He is one of Haley's many success stories, not because Dierks kept rowing after Rose City, but because he took what Haley taught him and — in Haley's words — ran with it. For Dierks, the concept that stuck was the value of hard work. 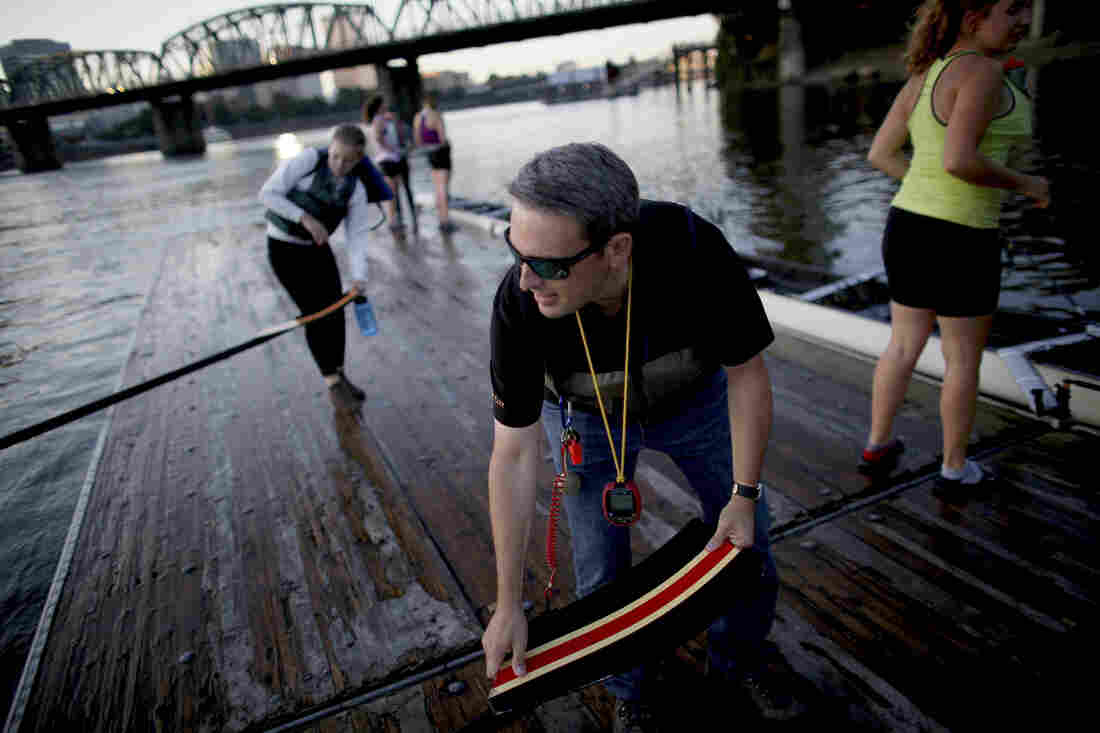 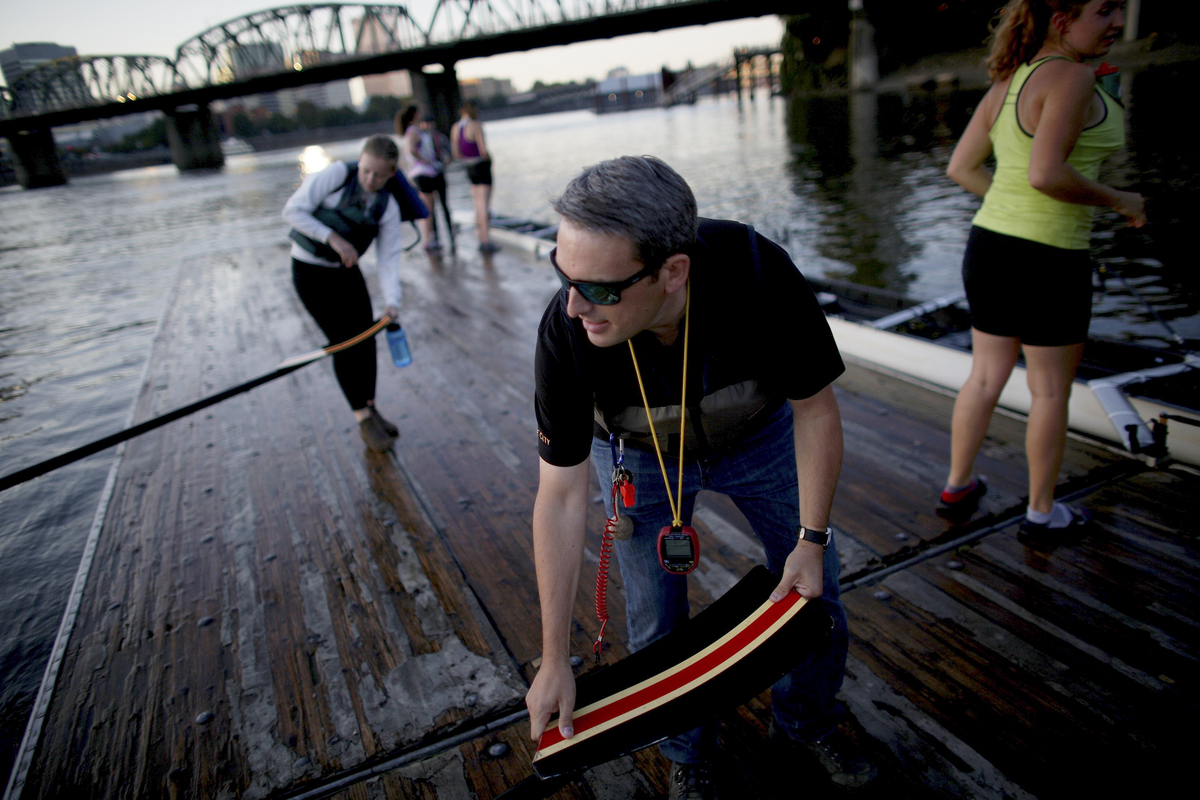 After practice, Haley helps students bring the boats up onto the dock.

"That has totally permeated the rest of my life: with school, with rowing, with relationships, with friends," he says. "You only get as far as the work that you put in."

The rowing and life lessons have bred tremendous loyalty and respect for Haley, but he'll never be mistaken for warm and fuzzy.

This philosophy also appears to have its roots in Haley's London experience. In a newspaper article from several years ago, he praised his coach, a former Olympic rower, for teaching Haley how to be both inspirational and tough.

"He didn't coddle me," Haley was quoted in the story. "He spoke to me as if I was worth the straight story."

In Boston, the girls finished 34th out of 85 boats, but they also showed the mental toughness that Haley preaches. An announcer took note of the tenacity of their boat, identified by the 25 on the bow.

"Bow No. 25 is not giving it up here and this is great," the announcer reported. "We love to see this kind of racing. Look at them taking it back!"

Molly Mastrorilli, 17, was in the boat. She says she achieved her goal at the event by successfully representing what Rose City stands for.

"To me, it's not necessarily the fastest team out there, but we definitely are disciplined, hard-working people who try to be good people and try to work hard," she says. 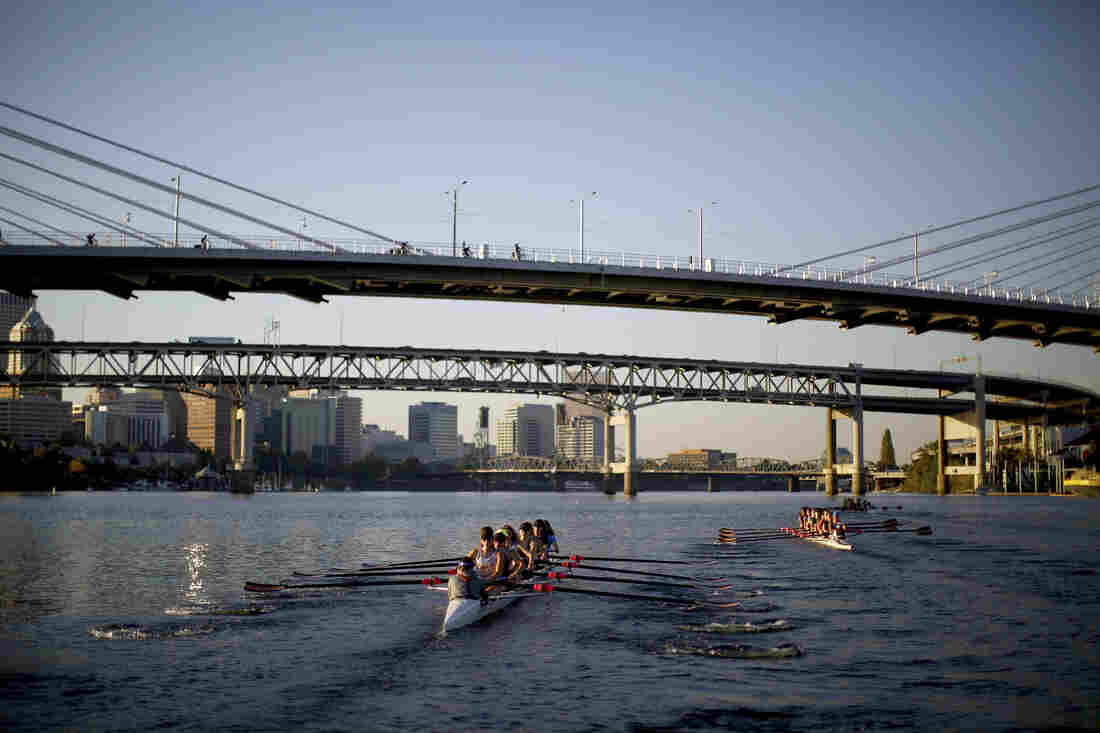 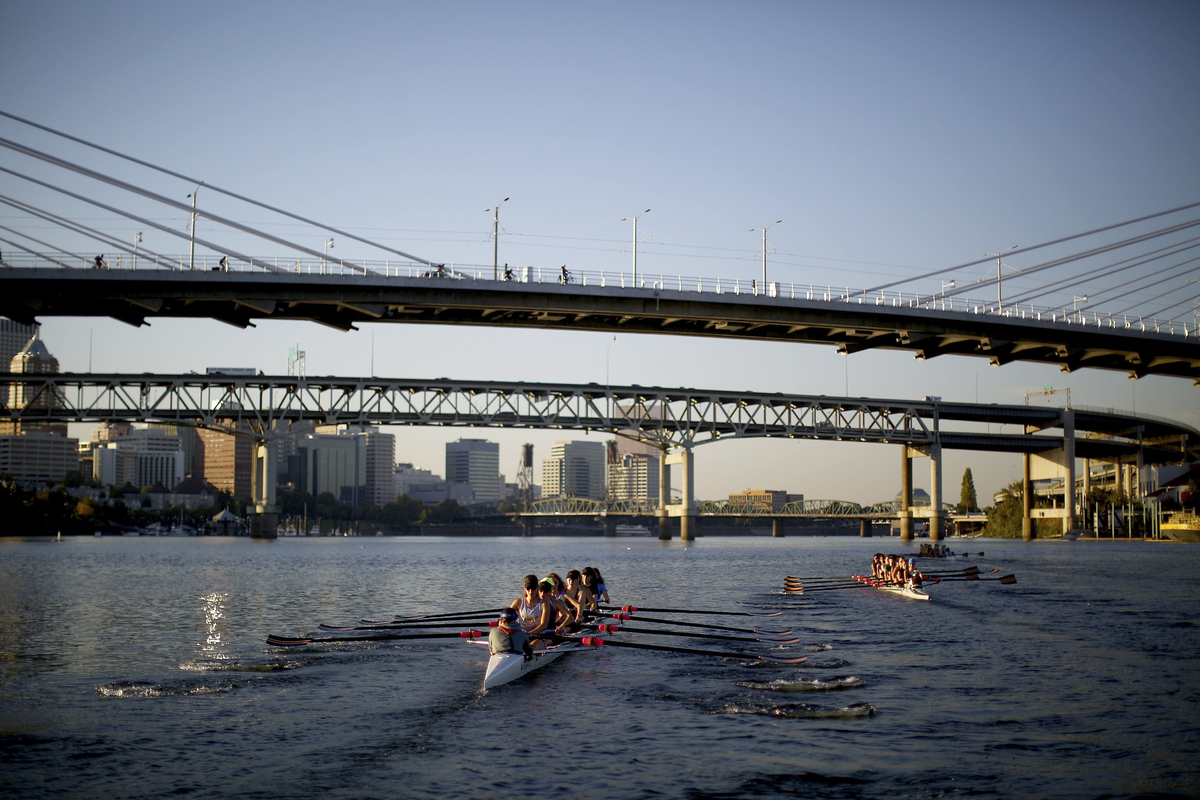 Rose City Rowing Club under Tilikum Crossing, Bridge of the People, in Portland.

Of course, winning is important and the team will try to add to its already full trophy case when spring racing season, the most important time of the year, comes around. But Haley says the competitions and the endless practices are as much an investment in what he hopes is a rowing future for his athletes.

"I'd like them to be able to walk into any boathouse anywhere in the world, at any level, at any age, and be able to hop in a boat and work with the group that's there," he says.

Haley says it's impossible for his athletes to get to that finished point while at Rose City. There's too much going on in their teenage lives.

But getting them on track, and seeing the lightbulb come on, he says, is where he gets his satisfaction. So, if you see a glow coming from Portland's Willamette River, that's why.