Accessibility links
For-Profit Colleges Seeking Veterans' GI Bill Dollars Aren't Always The Best Fit : NPR Ed There are growing calls for leading universities as well as community colleges to do more to attract and serve those who served. 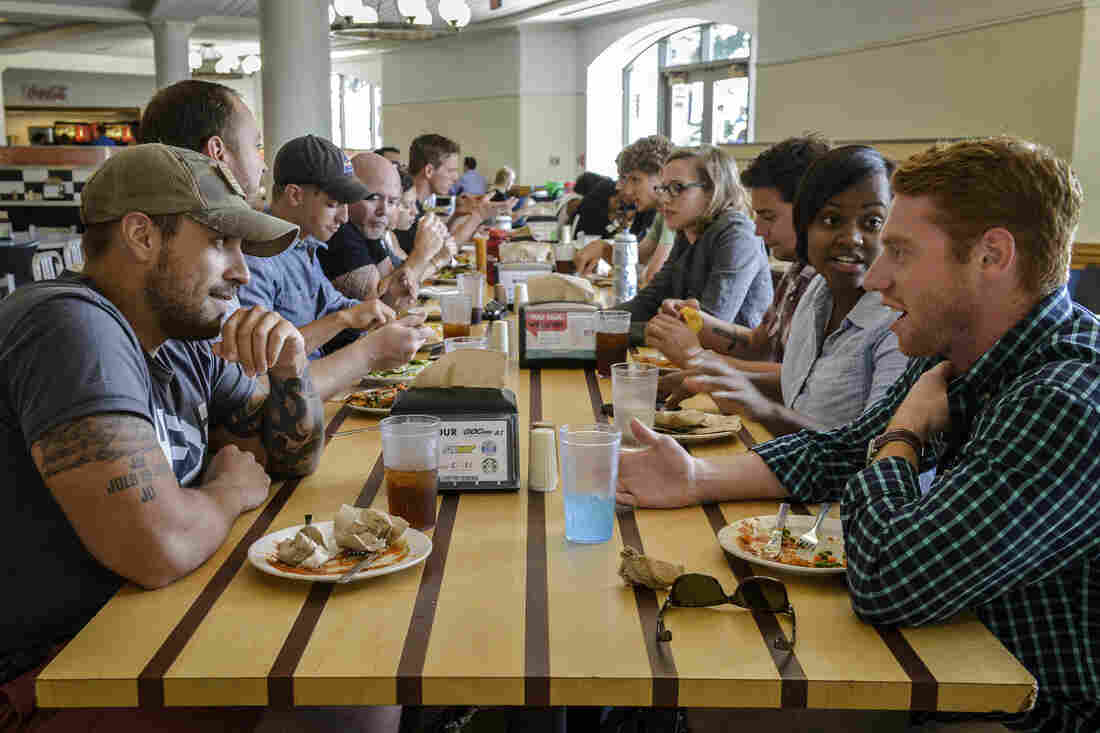 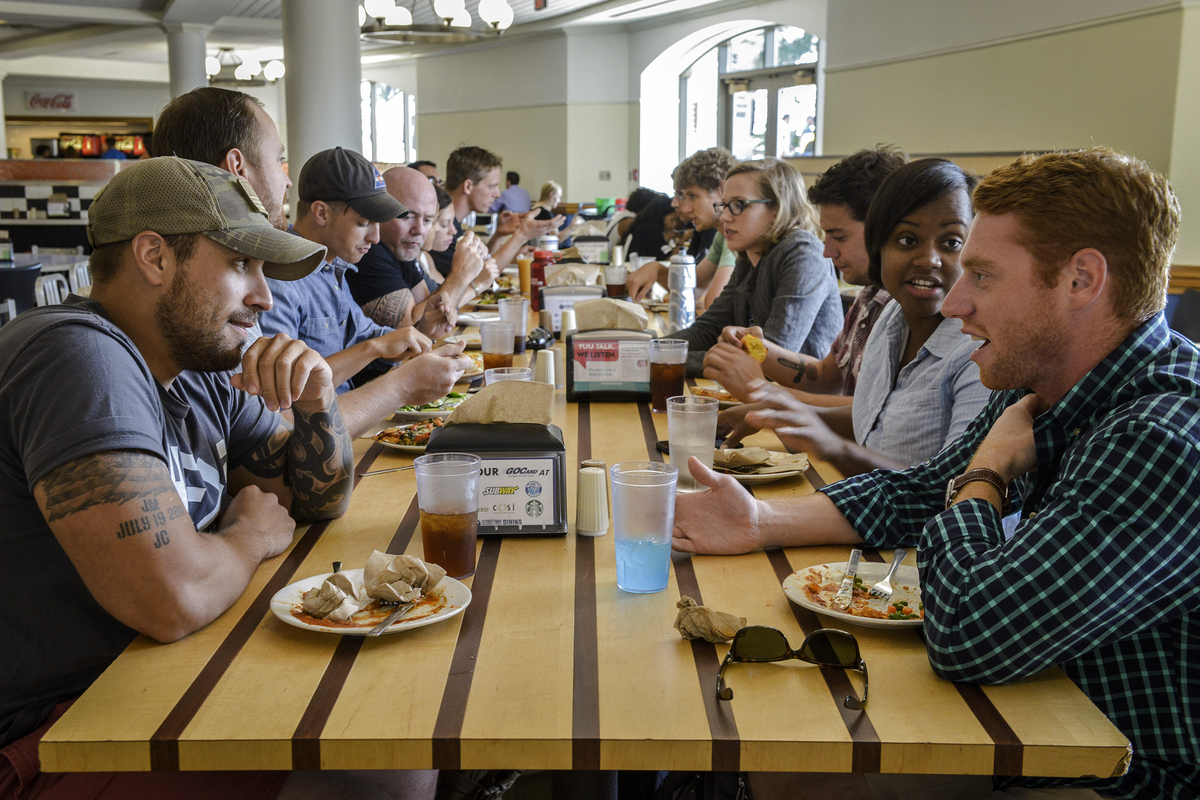 Participants in a Georgetown University program for military veterans dine together on campus in Washington, D.C.

Recent government sanctions against predatory for-profit colleges that preyed on veterans by using inflated job promises have opened the window on the wider challenges of helping veterans transition from service to higher education.

This week, the Federal Trade Commission filed a lawsuit against DeVry University claiming the for-profit deceived students with claims that its graduates make more money and that 90 percent of its graduates seeking work found jobs in their field within six months of graduation. In a statement DeVry vowed to "vigorously contest" the suit it calls baseless.

More than 1 million veterans and their families are taking advantage of the Post-9/11 GI Bill to attend college. But thousands are still attracted to for-profit schools. Are they aiming high enough? Are for-profits really the best fit for those who served?

The for-profit sector has marketed aggressively to members of the military and even enrolls them online while they're stationed overseas. A 2014 Senate report shows that eight for-profit college companies got about a quarter of all the funds spent on GI Bill benefits in 2012-2013. The report also says, on average, for-profit schools cost twice as much as educating veterans at public colleges.

One reason these schools target vets is that GI Bill funds help them comply with a federal rule that states that at least 10 percent of revenue for for-profit colleges must come from outside the Department of Education's Title IV financial aid programs. Some critics says this is a loophole and are calling for lawmakers to close it.

But others say traditional colleges and universities, as well, should be doing much more to reach out to help those who served reach their education goals. And that vets themselves need to shake off some education myths.

I reached out to former Army Capt. Tim Hsia to dig deeper. Hsia co-founded the group Service to School, which assists vets transitioning to higher ed with free application and school counseling help. He is a West Point and Stanford graduate who served two infantry combat tours in Iraq, including in Mosul and volatile Diyala province during the pivotal "surge" near the end of the American occupation.

Tim, the data show that there's a dearth of U.S. veterans enrolled, not just in Ivy League schools but really the top echelon of America's undergraduate colleges and universities. Is it fair to say that myth No. 1 might be veterans' own perceptions that they won't get into these top schools, in part because of their own lowered expectations?

There is definitely an aspect of where veterans are not setting their goals high enough. But there is also a lack of awareness of what they can reach if they strive and work hard. The VA has published data on veterans transitioning out. More than half of them will be first-generation college students. Many of them see the schools available to them as for-profit schools because they are the schools that most aggressively target them. There is no training or coaching for these veterans on what's best for them and how to make that transition.

That gets to another misconception that's hopefully changing following the scandal at Corinthian Colleges, once the nation's largest chain of for-profit schools, and at other for-profit institutions. That is the idea that these are the best fit for veterans.

It's a myriad of factors which are driving veterans to non-ideal schools. One is for-profits marketing to them and [the second] is service members' own, perhaps lowered, expectations. A third factor is that the top schools could do a much better job of reaching out to veterans. In my mind it's head-scratching given how vets come with the Post-9/11 GI Bill benefits. So their education, for the most part, is heavily subsidized if not fully covered by the government. Do veterans have the academic excellence to get into those programs? Some veterans do.

And the DOD and the VA do not offer many resources for vets in transition. There was a Rand report that said there really is limited support for veterans who want to pursue higher ed, while there are a lot of resources and nonprofits trying to help veterans get jobs.The last thing I think anyone wants is a veteran who is doing a job below their real potential.

The scandal at Corinthian got a lot of coverage. The issue of some of America's top, say, 100 schools, and the Ivy League not doing enough to actively recruit veterans less so.

There's a lot more that America's top 100 schools can do for veterans, and many like our VetLink schools are taking a big step in that direction by actively working with us to recruit, source, identify and admit qualified veteran applicants. Veterans have to be academically qualified for these top 100 schools. Full stop.

We also think schools could take a more holistic approach to veterans because right now the veteran perception is that getting into these top schools is unattainable and so uncertain. Schools can do more by leaning forward and taking a little bit more risk on student veteran applicants, meaning boosting enrollment and working with organizations in this space like us and Warrior Scholar Project to further attract veterans and educate them that they are veteran-friendly.

These vets are often labeled "nontraditional" students. And many are. Soldiers, marines, sailors, airmen and Coast Guard vets often come out of their service time with powerful and unique skill sets. Technical as well as leadership and organizational. Some of those are skills top schools should want in their undergraduates, no?

Totally. It's a win for the school. They get these veterans with leadership and who have this incredible experience who want to give back to their community and to the nation writ large.

Yet many vets are still attracted to for-profit colleges. Where is that disconnect, that cognitive dissonance coming from?

If you're a veteran, you're 24 or 25 maybe and married with a kid and maybe another on the way. If you're transitioning out you don't have much time to think, "What am I going to do 12 months from now?" You get out and you have barely a month to think about what's next. The last thing you want is to go back to your hometown and be that veteran who doesn't have a game plan. So you say, "OK, I'm going to get a job or I'm going to go to school." Most schools don't have admission cycles to accept veterans. Whereas these for-profit schools, it's turnkey. It's easy. They set it up that way. It's smart of them. For some veterans it can be helpful. And many veterans don't have that wait-and-see mentality.

And some for-profit schools are preying on that time crunch?

It's not just Corinthian Colleges. I think focusing on for-profits misses the wider context. There are others who can do more for veterans and veterans to do more for themselves to prepare themselves not to go to for-profits. Other schools in their marketing need to make it clear veterans are welcomed and accepted. It's also the VA and [Department of Defense] doing more. It's the nonprofits doing more. That's why Service to School and programs such as Warrior Scholar exist.

You raise a good point. Many from the Pentagon to higher ed need to do more to come up with plans and programs to advocate and attract veterans.

Totally. They need and can do more. As with every major social problem it's not just one, simple solution: "OK, we knock out the for-profit schools; what's next?" For some veterans, for-profits might be a good alternative. For some. I think it's a very, very small minority.

As you say, a for-profit school might be the right fit for some veterans. Do you and would you at Service to School recommend that route?

We have never endorsed or recommended an applicant to proceed with that route because we believe there are better alternatives. For example, if a veteran needs to beef up their academic credentials, then attending a community college is a great steppingstone that expands their academic horizons. Many of the veterans that we have placed into top undergrad schools have gone through a community college program. ... For people staying in the military, though, for-profits can be the easiest and most efficient way for people to get promoted in the military. The DOD, like other government agencies, doesn't distinguish between Yale and University of Phoenix when checking off the degree box. But it is a rude awakening for some veterans when they later transition out and realize that they often don't get academic credit for those for-profit classes when they're applying to nonprofit colleges, and that those for-profit degrees often don't count when applying to selective graduate schools.

You've mentioned a lack of higher-education role models for some service men and women. Aren't officer leaders in the field across the services role models?

I'm an officer. But I'll be candid. It's just a different mindset. For a junior officer who's gone to West Point or an ROTC program, that transition to higher education is very easy. They've got their service academy network, role models, they've got a well-worn path. But if you're an E5 sergeant from the Marine Corps or Army transitioning out, there's no model of, "How do I make a successful switch?" There's not a community, a program, a network to assist you with that transition. Compounding that is you're probably the first person in your family applying to schools.

What more, concretely, can the DOD, the VA and colleges do institutionally to help those enlisted men and women transition?

For the longest time the transition program for the military was centered on just getting them jobs. It really ignored the vast majority of veterans who were thinking of utilizing their GI Bill benefits. So providing more guidance and knowledge on how to make that transition is crucial: When you need to apply. What kind of credentials schools are looking for. How to package yourself as an applicant. Just a little bit of investment there, in the long run, will save taxpayer money.

In terms of the schools, it's outreach and getting them to be as aggressive as for-profit schools are in telling them how good of a program they have. That's part of what we do at Service to School. We partner with eight schools, some of the top schools in the nation, to help increase the number of veterans admitted. To society it looks very homogeneous: a veteran's a veteran. But it's very hard for admissions officers to pierce through that military veil. How do they efficiently, and at scale, reach out to veterans who are in Germany, Japan, the National Guard, Army Reserve, deployed veterans, Air Force, Army, Coast Guard, Navy, etc.? It's a very fractured and heterogeneous demographic. And there's also a different vocabulary and culture we come from.

If schools did a better job of getting more vets into college, might it help lessen the post-Sept. 11 civilian military divide in America today?

That civilian-military divide is very real. It's especially real in an academic setting. Some of it goes back to the Vietnam era when a lot of the top schools decided not to have ROTC programs there. There's been a whole generation of veterans not at these campuses. Some colleges want to address that. And I think that would be great for the schools and for society.