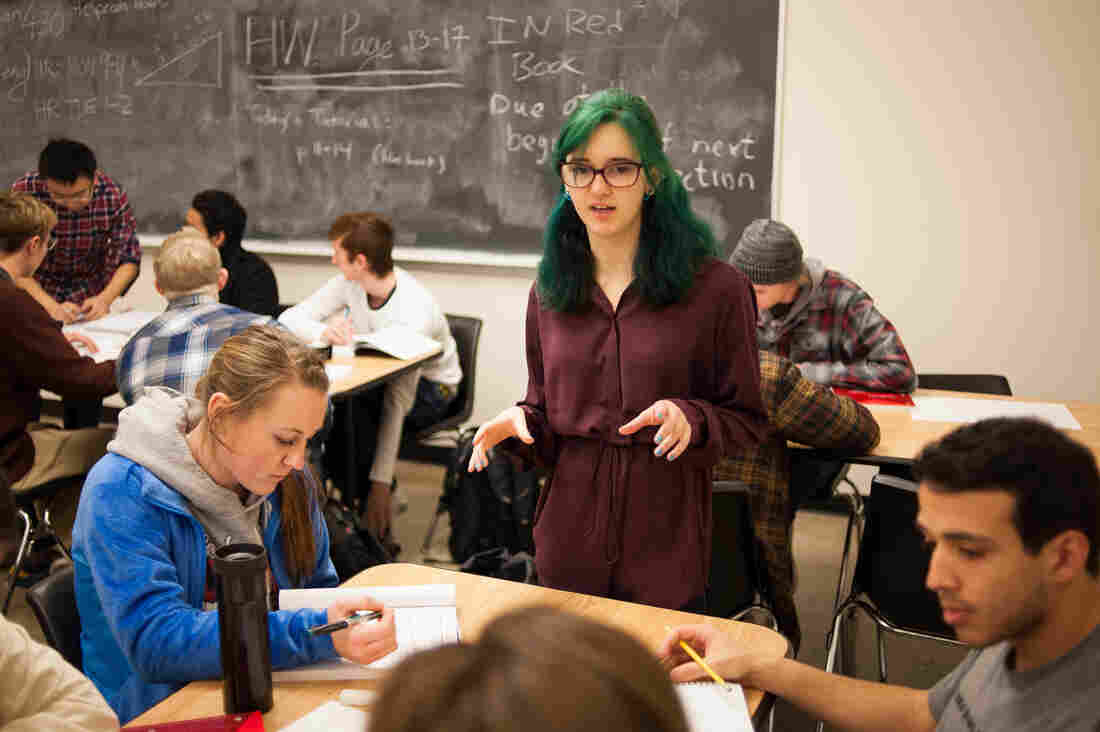 Amelia Westerdale works with physics students during a tutorial session at the University of Colorado Boulder. Westerdale is part of the Learning Assistant Program, tasked with helping to coach and tutor students. Theo Stroomer for NPR hide caption

In the basement of the Duane Physics and Astrophysics building at the University of Colorado Boulder, a science demonstration is going on, but it looks more like a vaudeville act.

One by one, students balance precariously on a rotating platform. Then they are handed what looks like a spinning bicycle wheel, holding it by two handles that stick out from either side of what would be the hub of the wheel. When you flip the wheel over, like a pizza, your body starts rotating in the opposite direction.

The principle at work is called angular momentum, explains Katie Dudley: "You can move or stop yourself by changing what you do to the wheel."

Dudley is a blonde 20-year-old junior with glasses, an aerospace engineering major. She's in charge of today's session, tutoring a roomful of students who are her own age or even a bit older. She's a learning assistant — an undergraduate trained and paid to help teach fellow students. 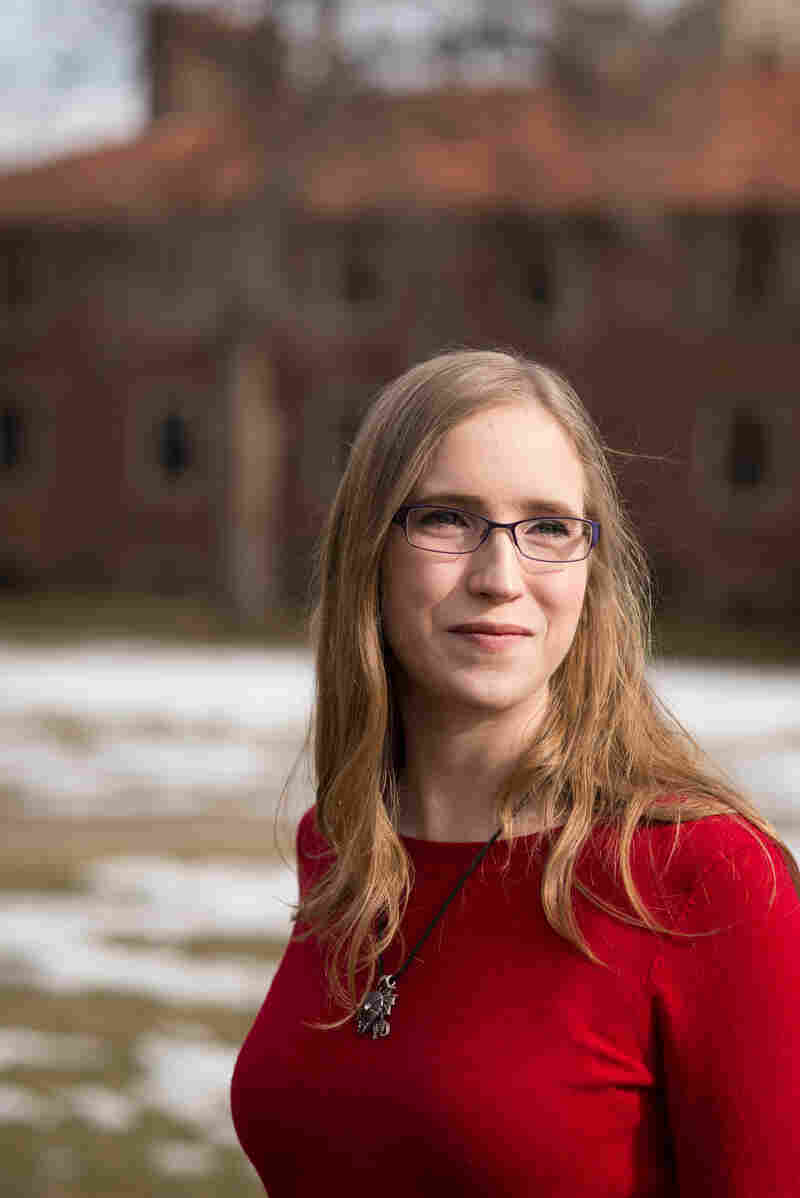 Most science and engineering classes around the country are a lot less interactive, a lot more intimidating, and daresay it, a lot less fun than this one. CU Boulder has started a movement to improve the quality of science education around the country, not only on campuses but in K-12 classrooms. And the LAs, as they're called, are at the center of this work.

The efforts here began with professors like Steven Pollock, who team-teaches the Physics 1110 course where Dudley is an LA. As we sit upstairs in his office, he tells me that about 15 years ago, he switched his research specialty from nuclear physics to the teaching of physics.

"I just sort of saw myself in 2000 looking forward 20 or 30 years to retirement," he explains. "I could either have learned a little bit more about the strange quark content of the proton, or how people learn physics and how to teach it better. And it seemed like that was way more important to the world."

Not everyone agreed. When Pollock came up for tenure here, the department was split in half, for and against. Since then, he has been named a national Professor of the Year.

His former colleague Carl Wieman, who earned the Nobel Prize in physics in 1995, has carried on similar research at Stanford. Pollock and Wieman are both leading colleagues, across disciplines from astronomy to physics, in researching how people learn science, and then applying that knowledge in the classroom. (Watch out for an upcoming piece on Wieman as part of our 50 Great Teachers series!)

One major point that the studies have proved is something you might already guess: Lectures don't really work. They leave most people without a solid grasp of even basic concepts, Pollock says.

"If you just teach by standing at the blackboard and try to transmit your understanding of physics just by words, then even a minimal standard typically is not reached," he explains. "Students aren't learning that stuff."

CU Boulder still has big lectures, but science and engineering classes also feature weekly small group discussions, labs and demonstrations facilitated by the LAs, sometimes under the supervision of grad students. The LAs take a course on pedagogy that emphasizes the use of open-ended questions and other research-driven teaching techniques. As a side effect, these bright young scientific minds get curious about the process of teaching and learning itself. 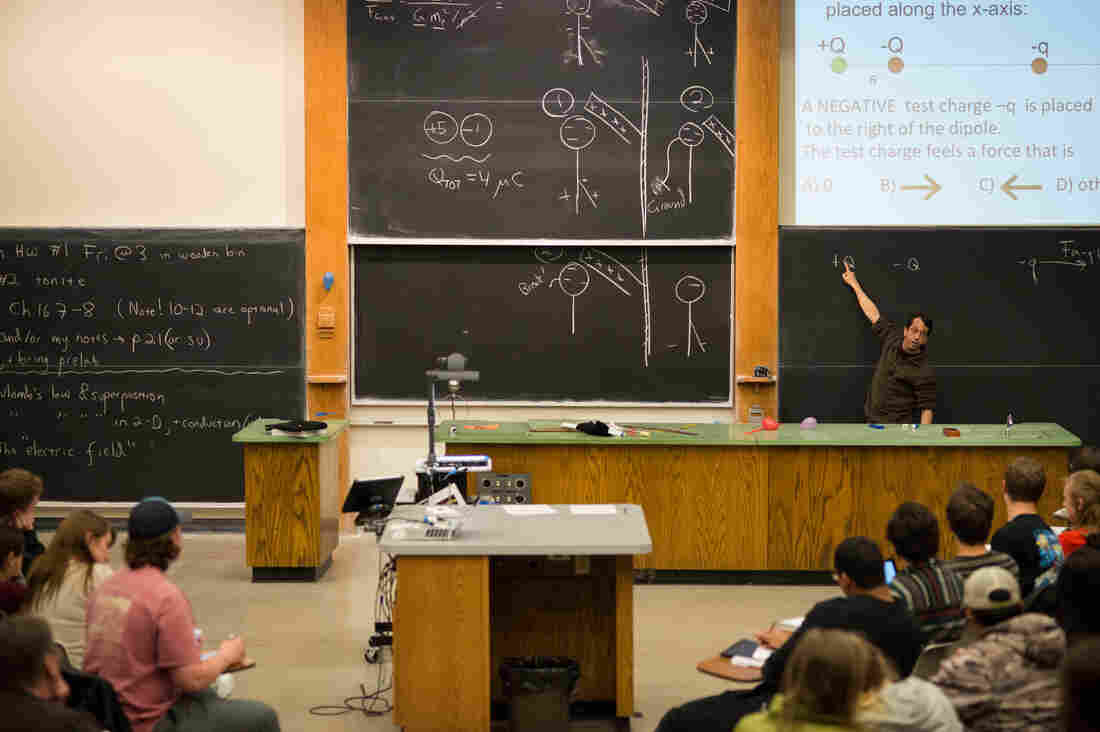 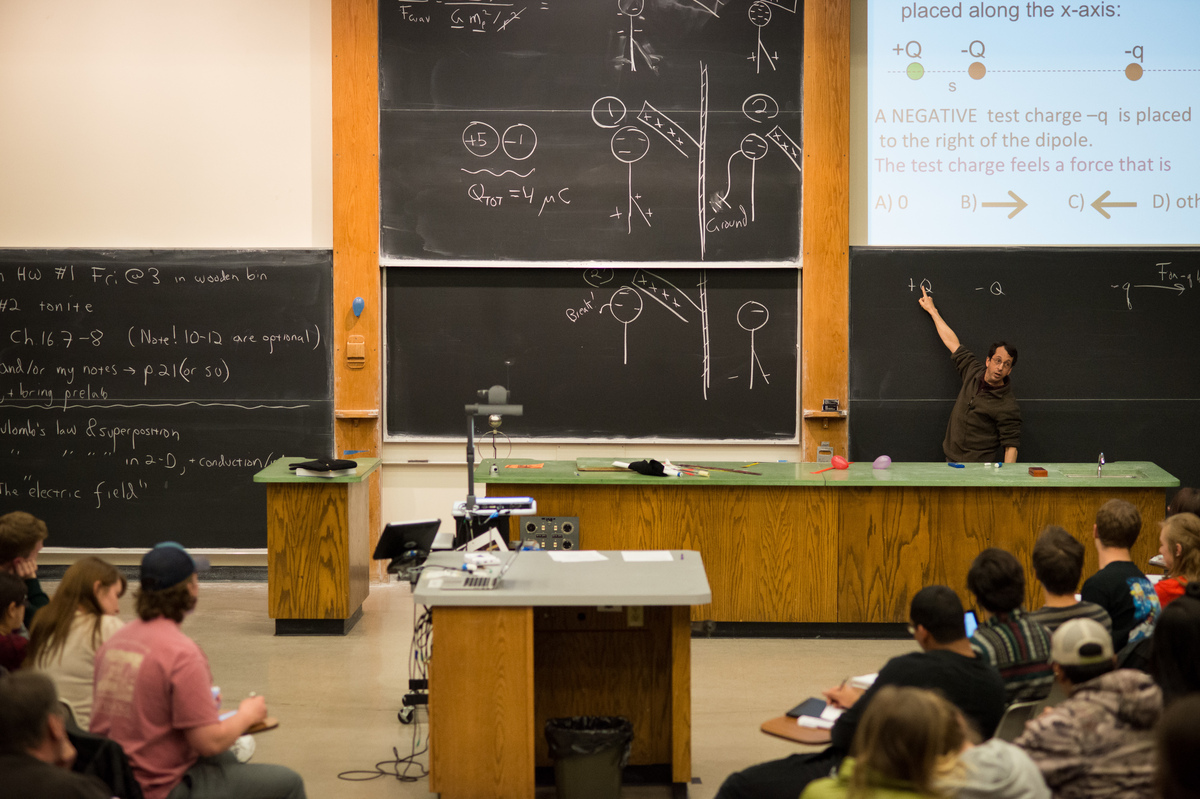 "I use my engineering thought with students, to figure out what they already know and are good at," Dudley says. "I have to figure out where they are, where we need to get them, and what steps might work best with each individual student. So every student is like a new engineering challenge to solve."

With the help of the LAs, "We can use pedagogy that is very effective, but needs a good teacher-student ratio," Pollock says. "We've got lots of people here in the room to help out."

The program has a "sneaky" faculty-development angle as well, Pollock adds. That's because, in order to take advantage of the LAs' help, professors have to shake up their old passive, lecture-based teaching methods.

In weekly training sessions, instead of asking content-based questions, the LAs are likely to ask professors about common student misconceptions or other pedagogical matters. "It improves our own teaching when we have to think about teaching with these undergrads," Pollock explains.

The department's own research shows that use of LAs improves students' understanding of science concepts in physics, astronomy and biology. Students who take LA-supported courses are more engaged in their studies and up to 10 percent more likely to graduate. 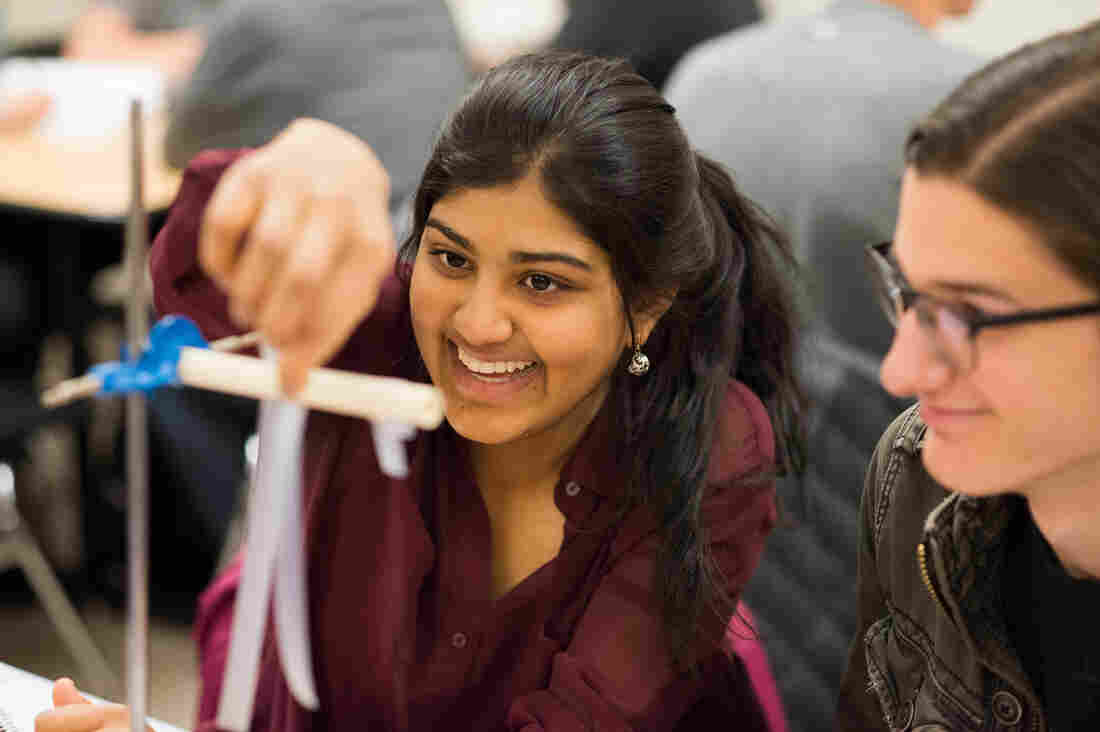 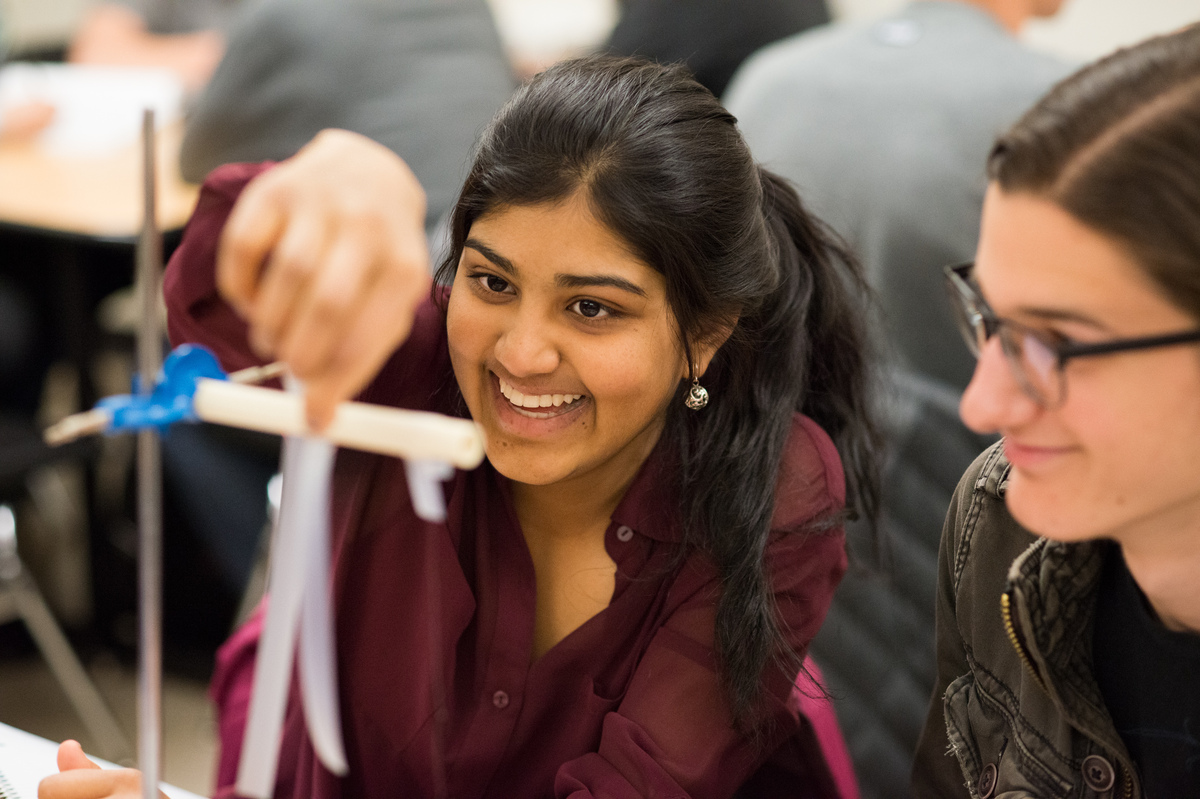 The students in the basement demo session report the same thing.

"Katie's the best," says Brenda Ortiz, a junior studying psychology and education. "I feel supercomfortable asking her questions. If you don't get it one way, she has multiple ways of explaining it to you."

His own section of this course was earlier in the afternoon, but he often shows up at Katie's section, also: "I've been riding on that wheel for the past two hours. It makes me dizzy, but that's part of the fun!"

The LA program is shifting the momentum at another level, too.

There's a lot of talk about the importance of STEM — Science, Technology, Engineering and Math — for America's future competitiveness. But across the country, very few undergraduate math and science majors go on to become classroom teachers.

"One a year — that's a high-producing institution," explains Valerie Otero, referring specifically to physics majors going into the K-12 classroom. Otero helped start up the LA program soon after she came to CU Boulder's School of Education in 2003.

The lack of teachers with science backgrounds means that most students get their first introduction to STEM disciplines from teachers who are less familiar with the subjects — and who may even be intimidated by them. This "math anxiety" gets transferred to students, research says. Even at the middle school level, about a third of math and science teachers nationwide either did not major in the field or are not certified to teach it.

With the introduction of the Learning Assistant Program, today about 16 to 20 LAs every year at CU Boulder get their teaching certificates while they're still undergraduates. 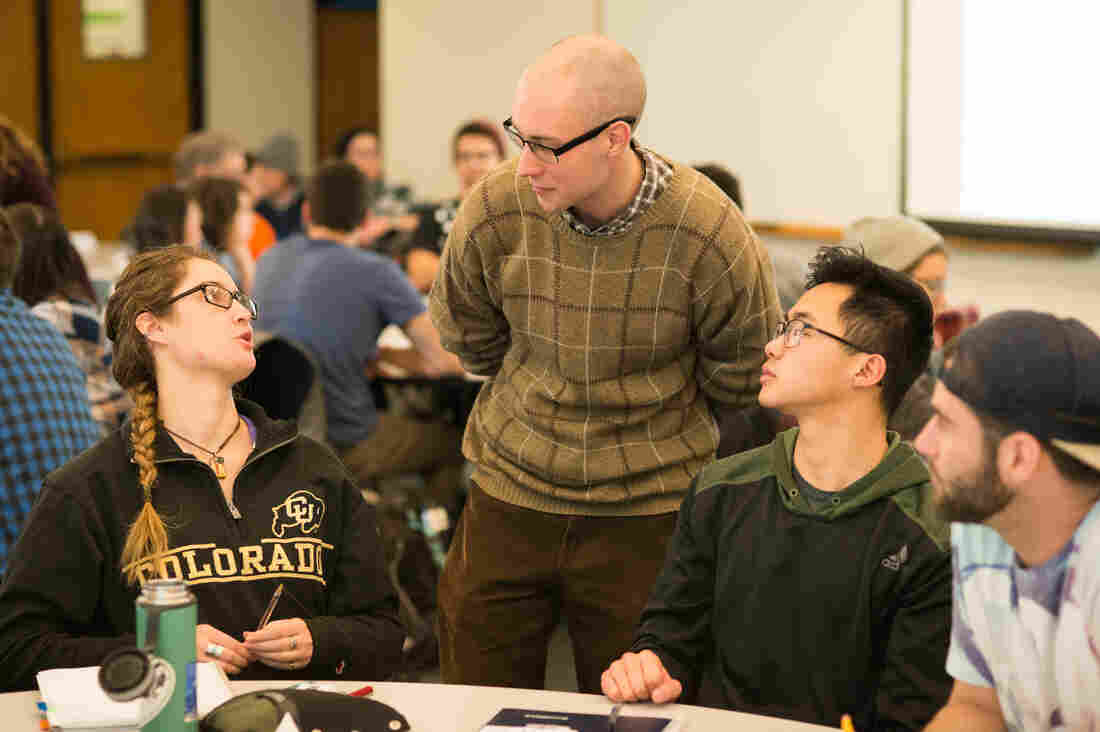 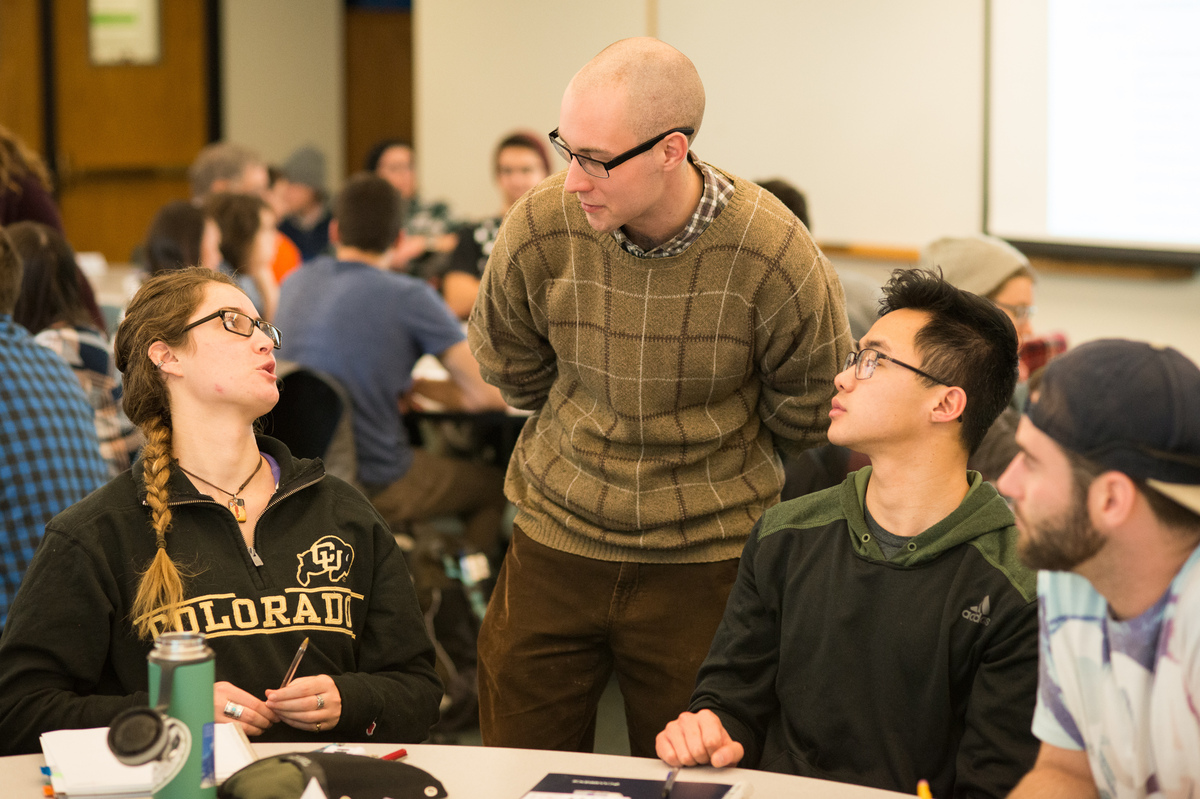 The number is small in absolute terms, but it means a lot for access to quality science and math teaching. Especially in places like the Rosebud Indian Reservation in South Dakota, where Ian Her Many Horses, a Ph.D. student in computer science, is planning to return to teach.

"Coming out of the College of Engineering, I would not have had access to becoming a teacher," he says. "This was a way for me to get my foot in the door."

In the meantime, he's teaching the pedagogy course to other LAs, keeping his teaching skills sharp.

Otero says their research — following former LAs into the classroom — shows that they continue to be more likely to use more evidence-based teaching techniques, like group discussions.

This effect on the STEM teacher pipeline is a big reason the LA program is now being copied at 88 universities around the country.

"It's spreading like wildfire," says Otero, who has set up a website sharing their training materials. The program leaders often travel to teach and speak about the model. Nationwide there are about 3,000 LAs right now, and all told they're working with tens of thousands of students.

Katie Dudley is one LA who plans to go into teaching, even though she could make a lot more money in an engineering job. I asked her if she ever gets pushback from people, even family members, who feel like she should be taking some other, more lucrative career path. "All the time," she says.

Carissa Marsh, a former LA, is working at CU Boulder toward a certificate to teach high school. She admits that changing the image of science education is part of the challenge of the LA program. "When I tell somebody that I'm going into education but I studied biology, their first response is, 'Why aren't you becoming a doctor?' or 'You're too smart to go into education!' or 'There's no money in education.'"

Those comments "grate on me every single time," she says. "This is my passion. I don't think anybody can be too smart for education. I want my kids to have first-rate teachers who know the science and aren't going into it as a backup plan. I wish that more people could see education the way I see education."