Accessibility links
Two Days Inside A Classroom For Young Offenders : NPR Ed Lisa Elder teaches about manners, laundry and a good handshake at a juvenile facility in Vermont. 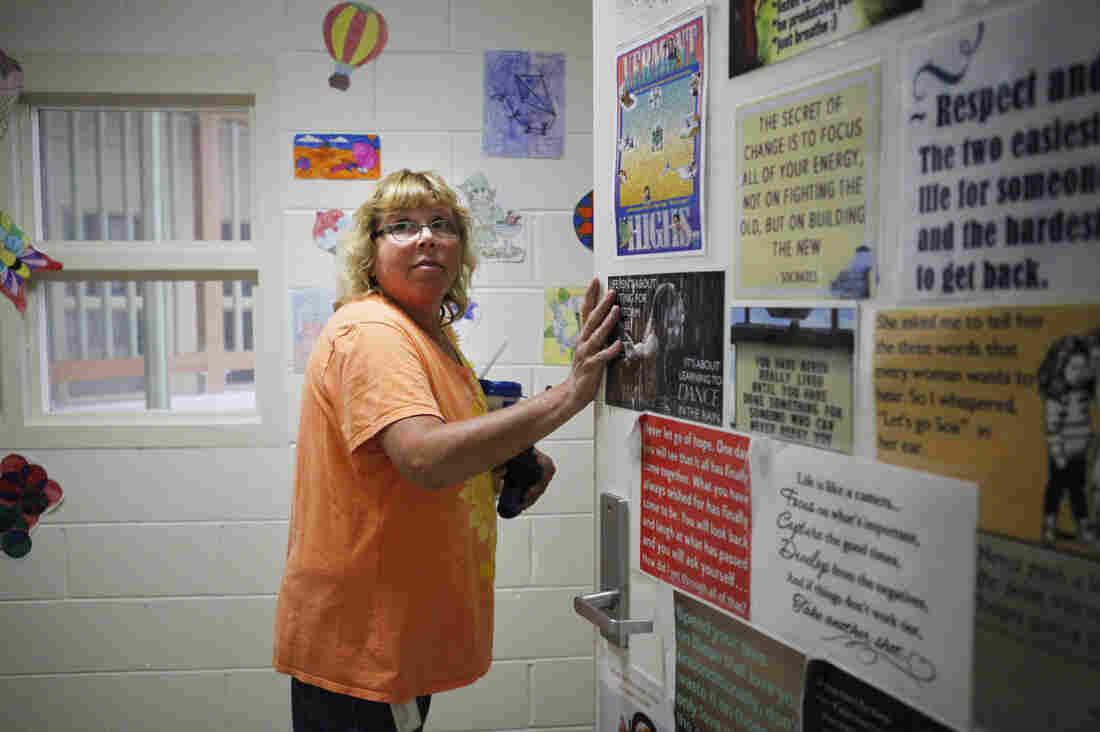 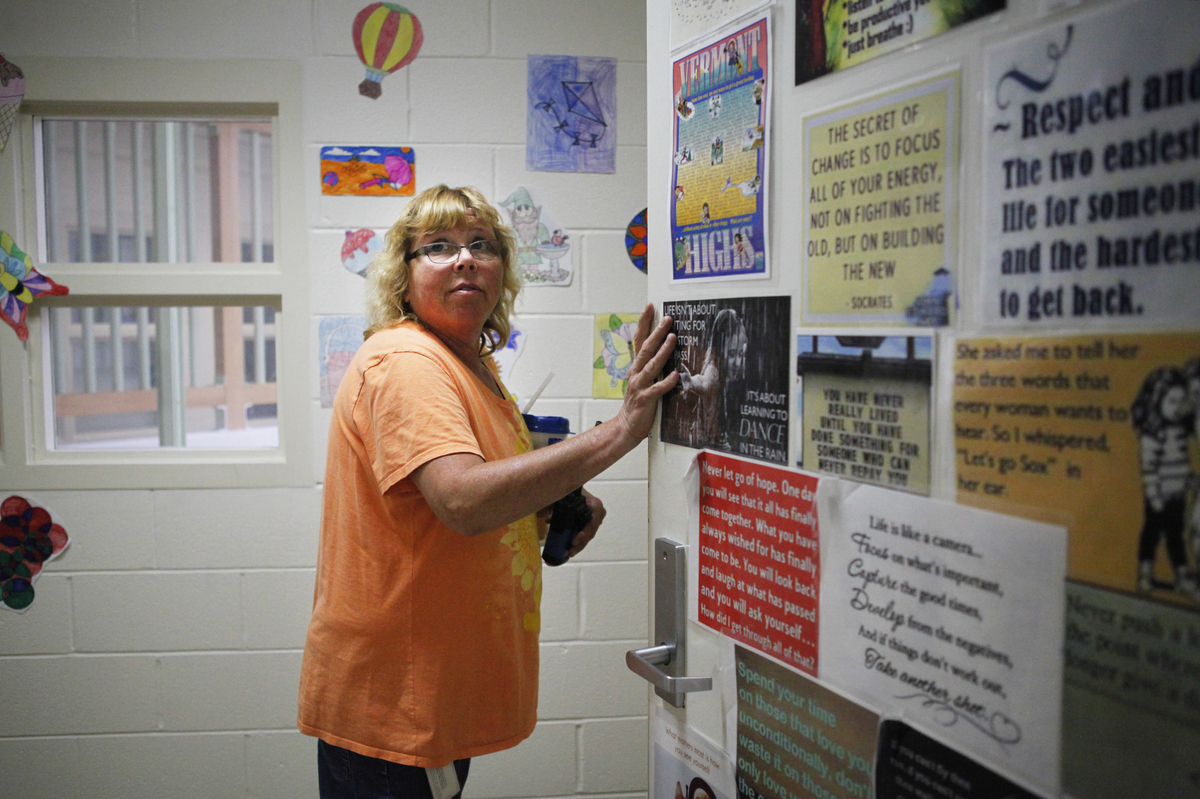 Set back from the main road, surrounded by trees along the Winooski River, is Vermont's only facility for youths in trouble. The building hardly looks like a jail, but young people come here from all over the state for offenses ranging from shoplifting or selling drugs to felony charges like sexual assault or murder.

When I first visited Woodside Juvenile Rehabilitation Center, I was given a tour by a young man named Tyler. To protect their privacy, we've agreed not to use the students' last names or tell you why they're here.

When I asked Tyler about his teachers, he singled out one in particular: a woman named Lisa. "Lisa is special," he told me. "She's the only one I'll do my work for."

And so, for our 50 Great Teachers series, I came back to Woodside to see just what makes Lisa Elder so special. Over two days in her small concrete room on the second floor, I got a chance to see an educator who's been working with children for 27 years in a setting few teachers ever experience.

A place where you need a walkie-talkie just to get into your classroom. Where there are guards available if you need help. Where the list of students changes daily as kids come and go.

And where every student brings behavioral and emotional issues that mean widely different expectations. "For some kids, it's just, 'I just hope you get better,' " Elder says. " 'I hope that some day when you get angry, you aren't violent.' "

At Woodside, they teach all the normal subjects: math, English, science. But this year Lisa is teaching something called Life Skills.

I'll let her explain: "If you want to wake up in the morning and go out and greet people," she says, "we're already talking about skills right there."

Life Skills means things like how to use a napkin, how to fill out a form with good handwriting, how to open a bank account.

While some of her students struggle with the most basic assignments, she has seen others go on to get a GED and even go to college.

When I visit Woodside there are 13 students. The youngest is 12 and the oldest is days away from his 18th birthday. One boy has been here for nearly two years. Another just arrived last night. 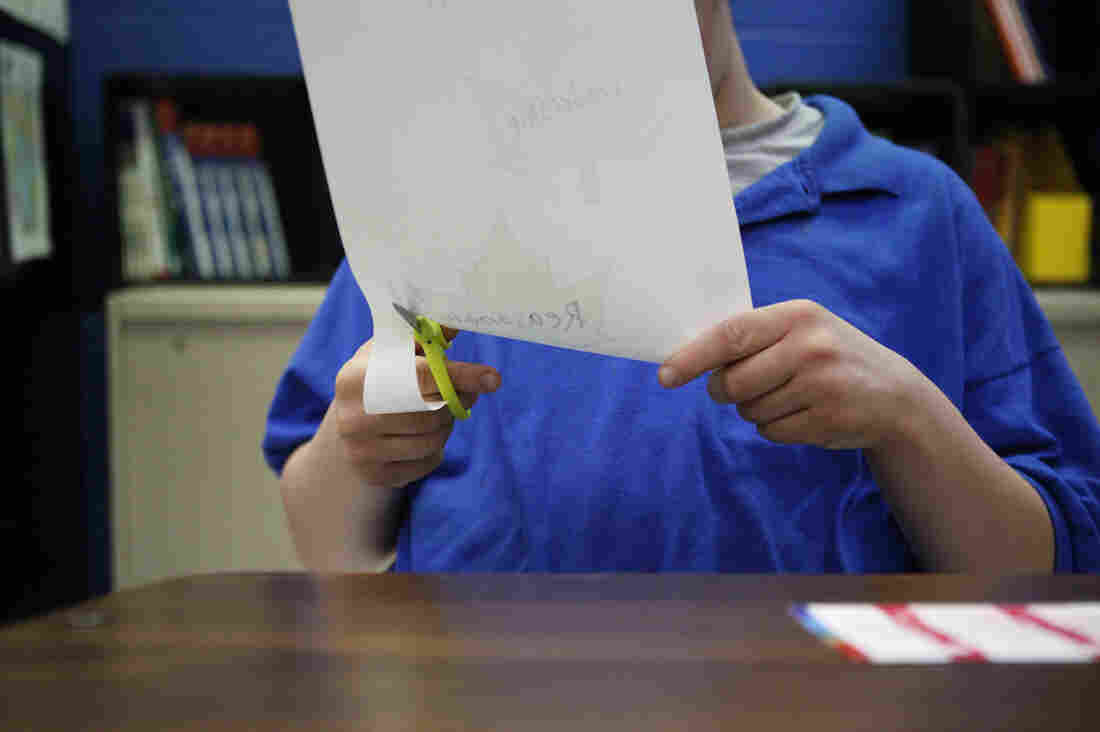 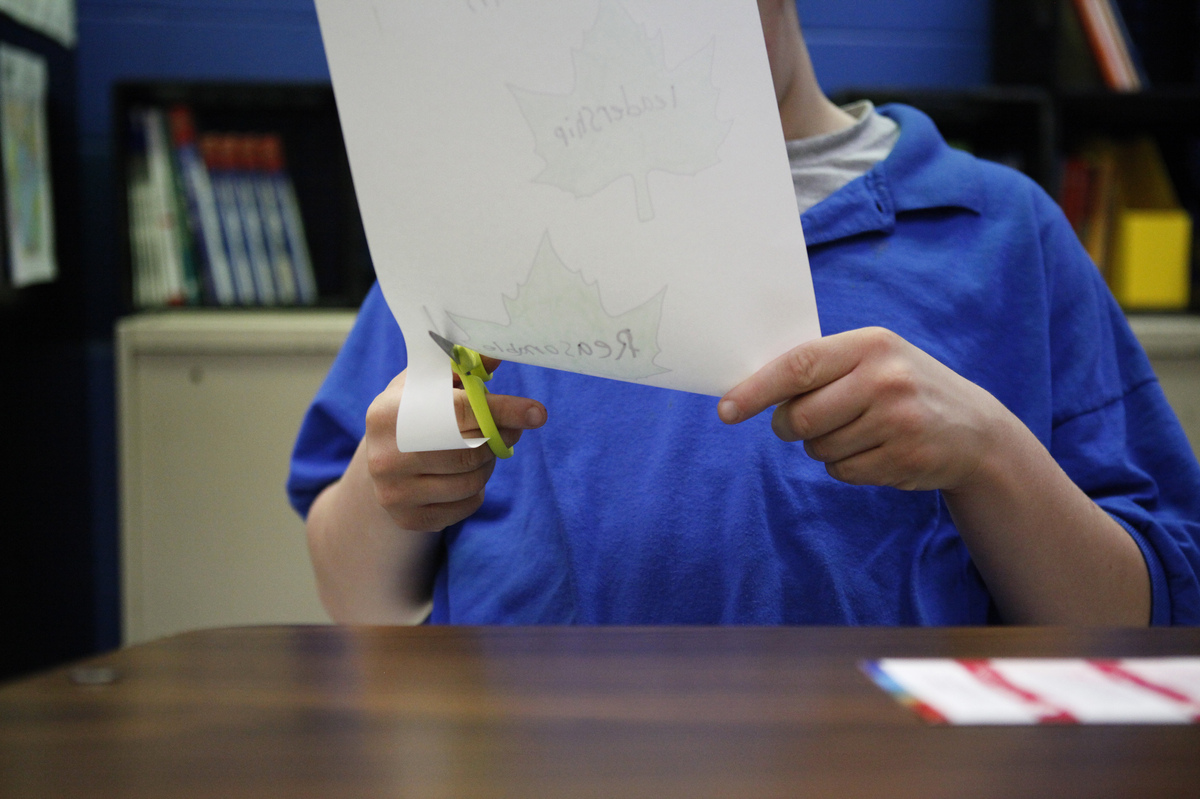 "I'm looking at kids who are 14 years old and have been getting kicked out of school since day care," Elder says. "People give up on these kids."

For many, Woodside is the first stable place they've had. Most have experienced trauma. They come from troubled homes, foster care, even from the streets.

"We've had kids that have never used forks and spoons," she says.

Elder doesn't have a lesson plan or an attendance book. She does have her walkie-talkie. When the hallways are secure and the teachers ready, the call comes over the radio: Students are on their way up.

"Why don't you guys have a seat and I'll tell you what we're doing," she tells them.

Today, they're going to cut out leaves from construction paper and write life skills on them: "Patience." "Hygiene." The class gets under way with just a few interruptions. 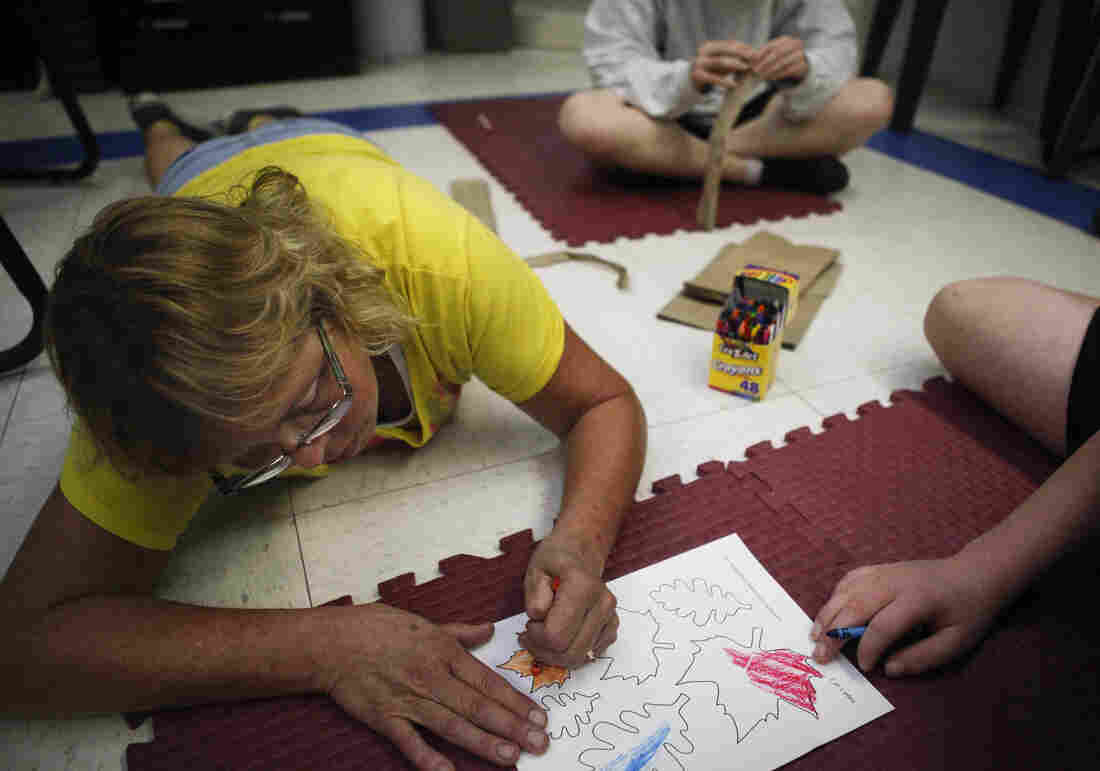 Elder colors paper leaves for the Life Skills tree. When they finish coloring, students will write skills they want to master on the leaves. Elissa Nadworny/NPR hide caption 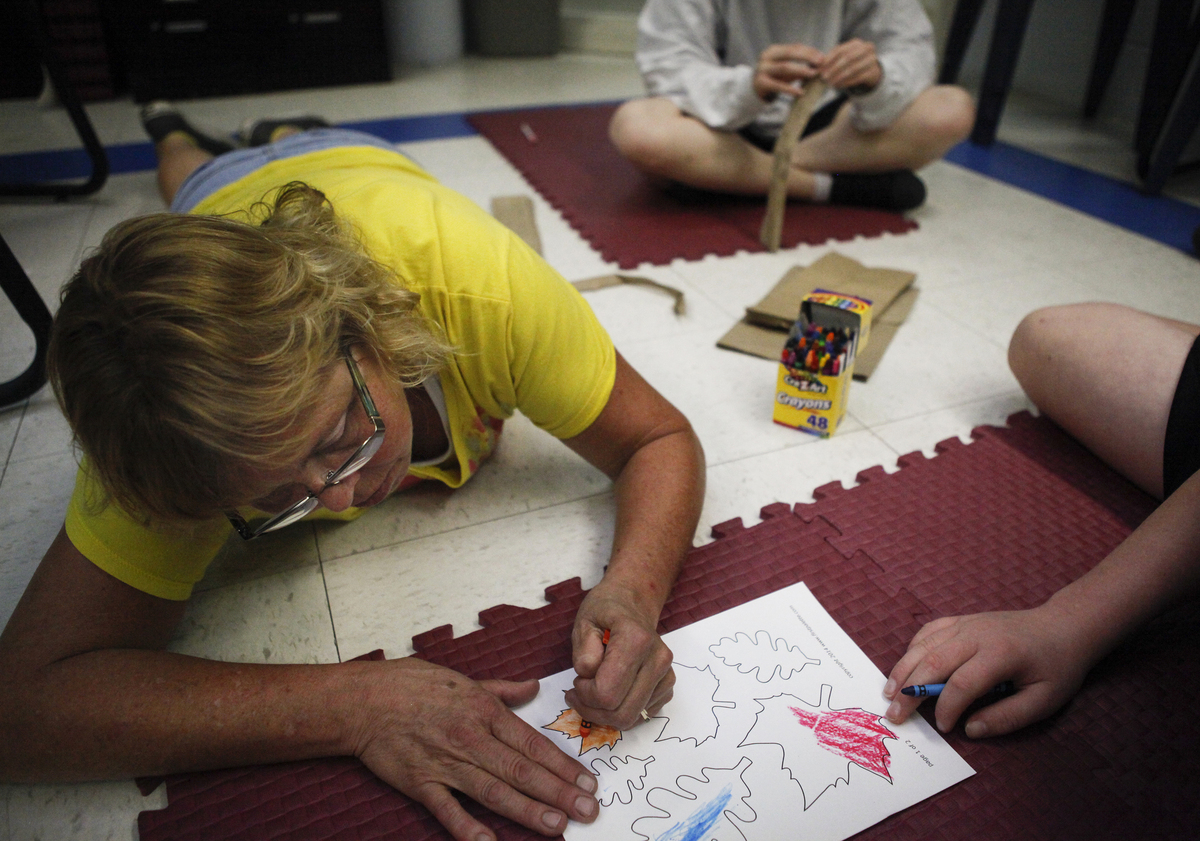 Elder colors paper leaves for the Life Skills tree. When they finish coloring, students will write skills they want to master on the leaves.

Then, Lisa notices a boy named Brandon. He's hunched over his desk and he's got his fist clenched against his chest — it's shaking. Lisa tries talking to him but gets no response.

It doesn't look like anything to me: just a boy who's not participating in class. But Elder has seen this behavior in his file, and she knows it's a warning sign.

She radios for backup: "Could I have a youth worker up in life skills?"

Despite the tension, everyone is calm. Elder's approach: Roll with it, and don't get rattled. The other students continue their work.

By the time the youth worker comes in, Brandon has turned his desk to face the back wall, and he's getting more and more agitated. He's still not responding.

"OK," she tells him, "Here are the choices: If you want to stay in my classroom and participate, I would love you to. I will do anything I can to help you. But if all you're going to do is turn your back and avoid everything people are asking of you, then I'm going to have you brought down to the unit."

She pauses for a moment. "I would like you to make the better choice and stay with me."

That's not the choice Brandon makes. It's becoming clear: He could lose control at any moment.

Elder evacuates the room, 20 minutes before class is over. As we walk down to the residential unit, she tells me: "So when I tell you that I don't know what the day is going to bring, that's a perfect example."

Even in this moment of disruption, Elder is enthusiastic as she talks with the two remaining students. They sit on the hard plastic furniture outside the cells and continue their discussion about life skills.

At 52, Elder is a bit of a hippie and a die-hard Bruce Springsteen fan. Her voice is deep and her laugh is even deeper. Her thinly framed glasses have such thick lenses her eyes bulge from the magnification. In nearly three decades of teaching at Woodside, she says she's seen just about everything.

"I have been assaulted only once in any serious manner," she says, "and I had to go back in the next day, because if I didn't, I didn't think I ever would."

She says she likes teaching here: She's good at it, and, perhaps more importantly, she connects with the students.

"You know I say this stuff to the kids: 'Public schools don't want you, or me.' "

The next day, Elder has the same three kids from yesterday. Brandon is back at his desk and he's in good spirits, wearing a paper pirate hat. Elder and a girl named Emily are sitting on the floor cutting and coloring more leaves.

"I've been here at least four times," Emily says, referring to Woodside. She describes herself as a "handful" for her teachers and says some adults give her a hard time over her recurring troubles. But not Lisa Elder.

Emily says she likes her life skills class. It's not so much the class, the curriculum or the lessons, she says. It's the teacher. 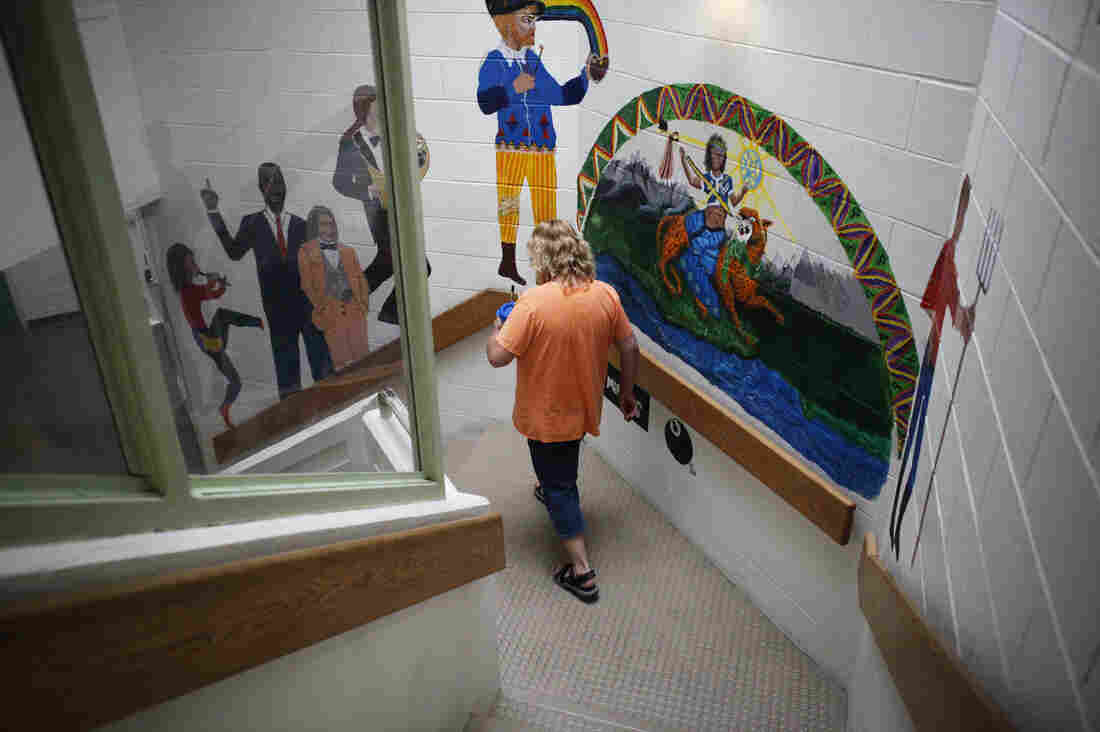 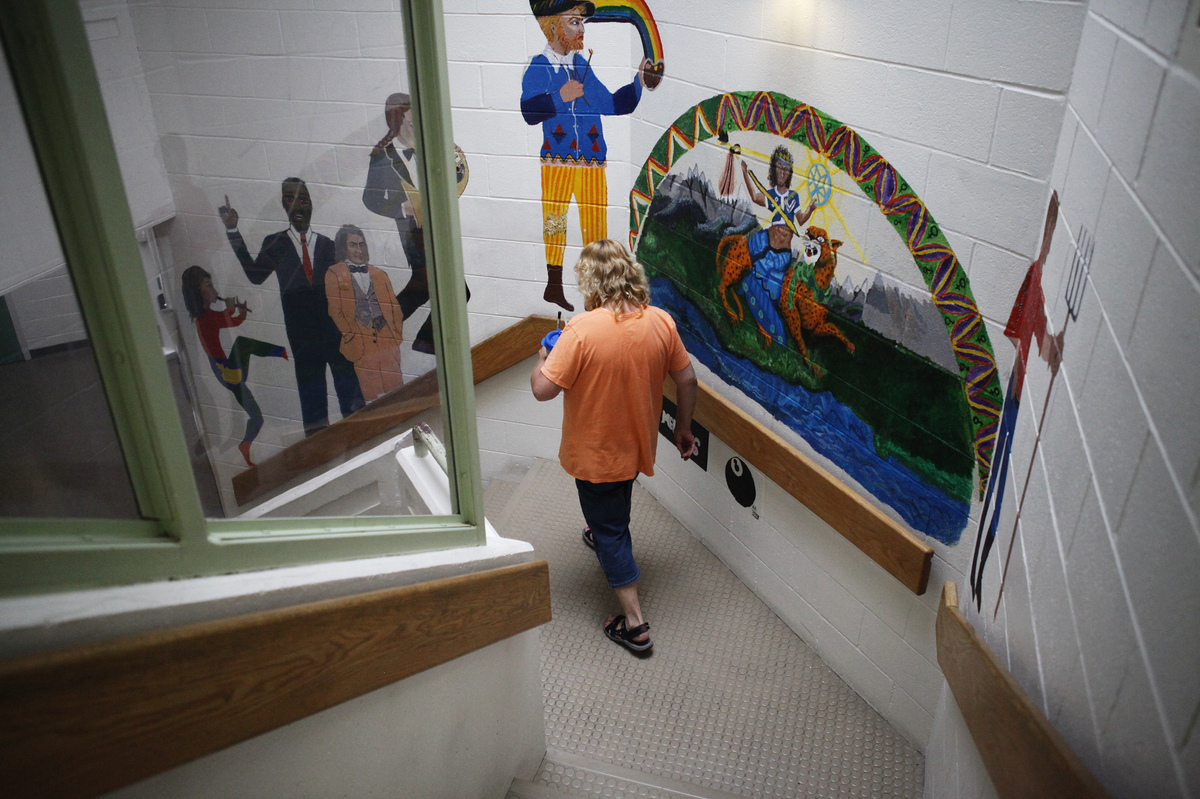 Elder walks downstairs to the residential area of the facility.

She repeats it again. "You just know she cares." It's like she's telling me, and reminding herself at the same time.