Accessibility links
Maurice Ashley's Chess For Progress: How The Grandmaster Is Using The Game To Teach Life Skills : NPR Ed Grandmaster Maurice Ashley travels across the U.S. to teach students to play chess and apply its tactics and strategies to their lives. A former student reflects on the lifelong lessons he taught her. 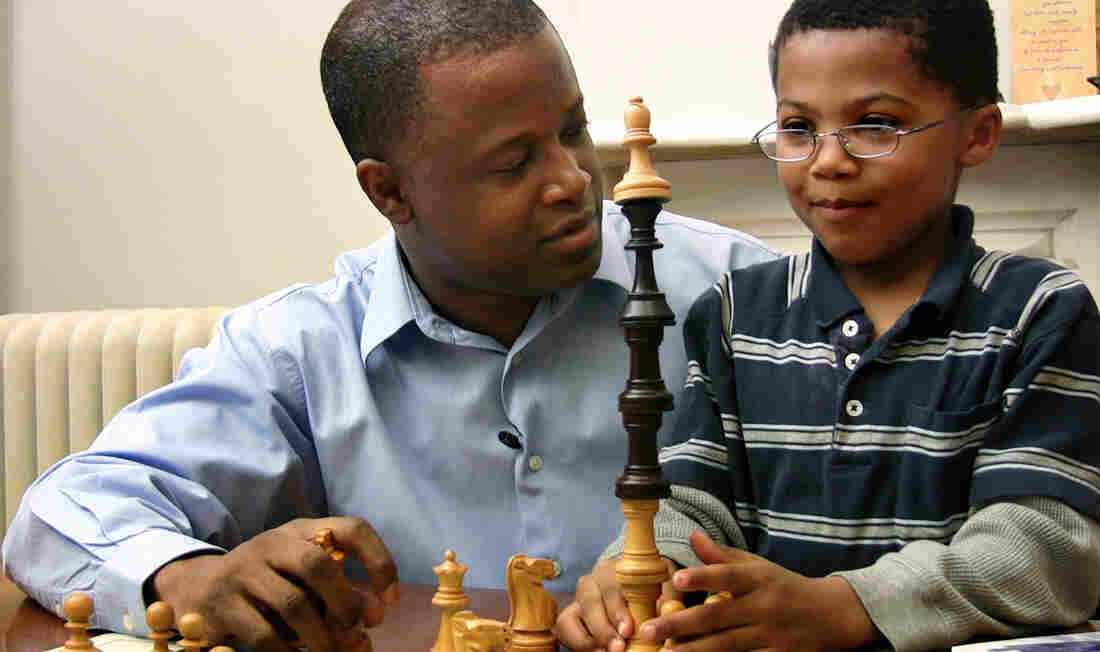 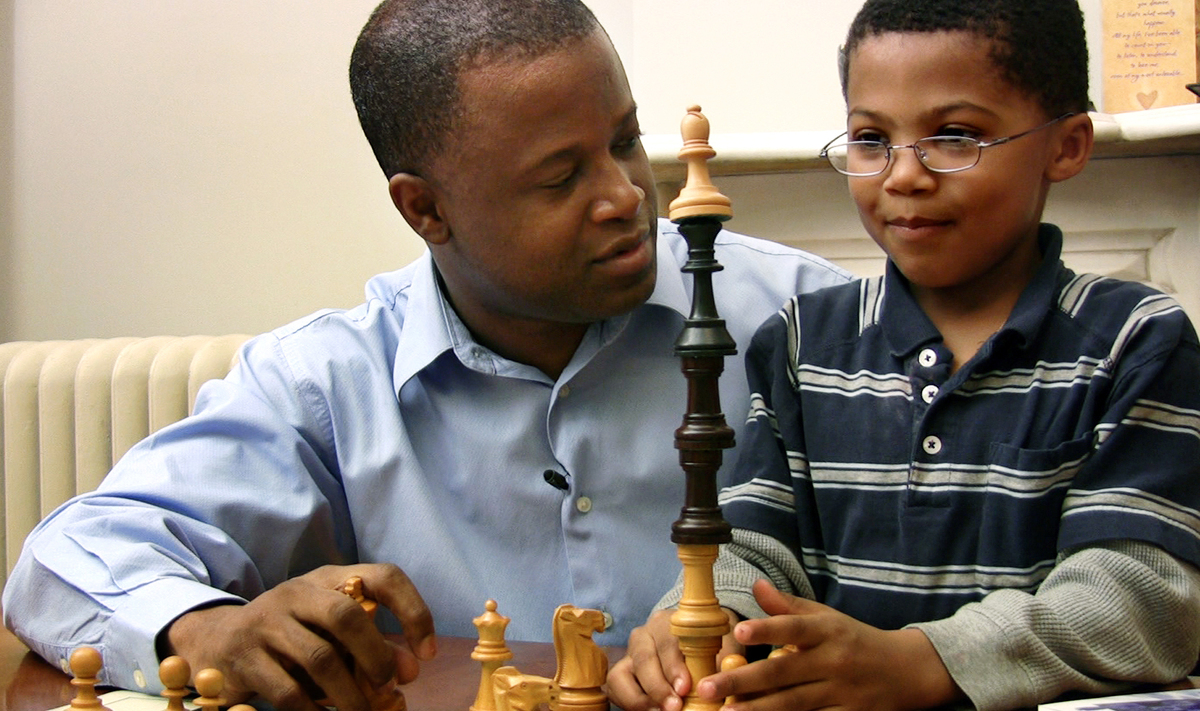 Maurice Ashley, a chess grandmaster and the first African-American to hold that title, talks with his son, Jayden.

A few "short" years ago, during my sophomore year at The City College of New York, some fellow Caribbean classmates told me that the education department was offering a "free" course, called Thinking Chess, for three credits.

As an international student from Barbados, paying almost four times more in tuition than locals, the idea of getting "free" credits in a system where we had to pay for everything was nothing short of a miracle. I jumped at the idea of taking the class because, after all, who doesn't want to save a few dollars living in a foreign country away from one's family?

More than that, I'd always wanted to learn chess. And, as if I weren't psyched enough about free credits, the kicker sold me — the class was going to be taught by an international grandmaster. I may have been a novice at chess, but I sure knew that a grandmaster meant I would be learning from one of the game's best. Details about our instructor-to-be got even more exciting. Not only was he a grandmaster, but he was the first African-American and Jamaican-born grandmaster in chess — a designation that brought me immense pride as a West Indian.

I have had students come up to me later as grown adults to tell me about how chess has helped to transform their lives with their ability to think more critically, to process data more rapidly and to make better decisions.

Maurice Ashley, grandmaster and recent inductee into the U.S. Chess Hall of Fame

His name is Maurice Ashley. It was my first time hearing about him, but I could hardly wait to meet him and learn the game that brought him fame — and of course, earn those free easy credits. Ashley was amiable and smart, a proud alum returning to his alma mater to teach, and this assignment was no game for him; he meant business.

In his introduction, he told us that ours was an addition to the many classes he'd been teaching throughout New York City since 1988 to students ages 5 to 18. His lessons, he noted, were not simply to instruct students on how to play chess, but how to apply its tactics and strategies to life.

Ashley made it clear that our credits would be hard-earned, and in order to pass the class, among other criteria, we had to (1) attempt to checkmate him in a limited number of moves and (2) write a paper on how we plan to apply the tactics and strategies of chess to our respective chosen professions and, ultimately, our lives.

All of a sudden, what I thought would be three easy credits seemed as daunting as the chances of my actually becoming a grandmaster. 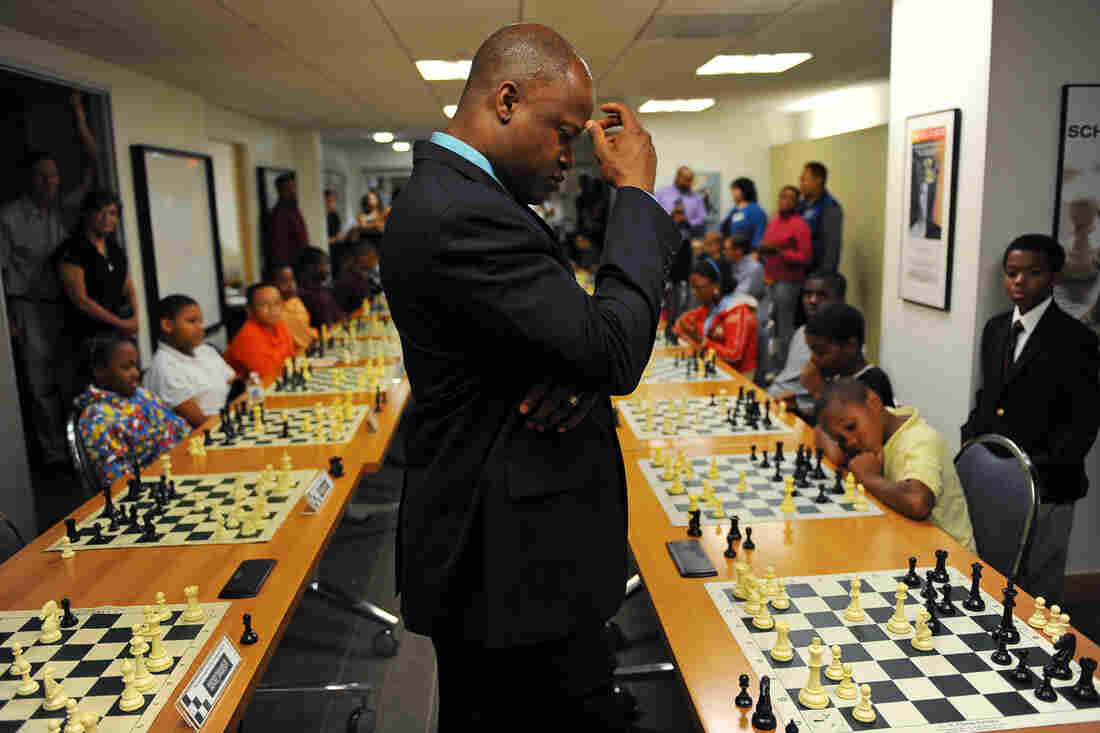 Maurice Ashley ponders a move while playing 30 children in a chess match at the U.S. Chess Center in Washington, D.C. The Washington Post/Getty Images hide caption 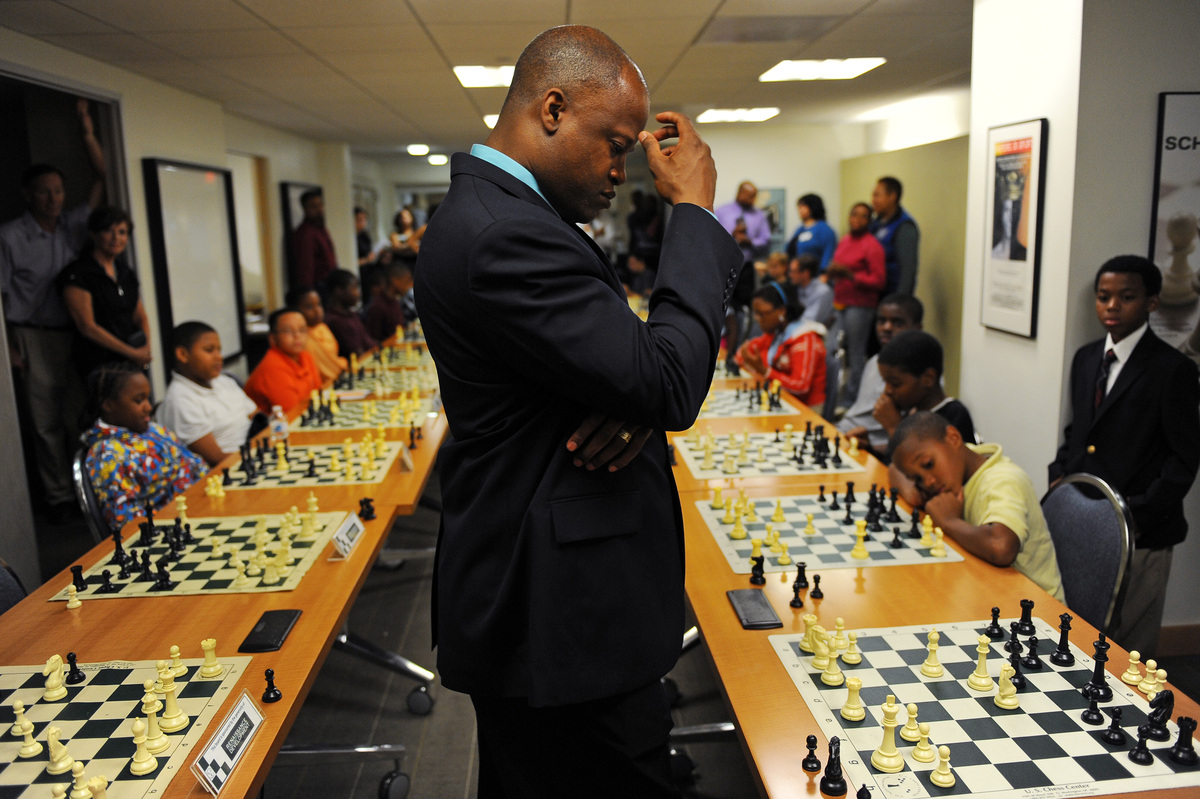 Maurice Ashley ponders a move while playing 30 children in a chess match at the U.S. Chess Center in Washington, D.C.

I didn't checkmate Ashley in my practical chess exam, but I got an A in that course and learned life lessons that have served me well beyond the classroom.

These nuggets came to mind last week when Ashley made headlines. As the U.S. Chess Championships got underway, he received one of the highest honors bestowed to an American chess grandmaster — induction into the U.S. Chess Hall of Fame in St. Louis.

The occasion caused me to reflect on his journey from Jamaica to the world stage and how for almost 30 years he has influenced the lives of countless students — mine included — through teaching chess.

I found my old college essay from the chess course I took with Ashley and I reached out to him for an interview. On revisiting my essay, I smiled at how my takeaway from that class was in sync with what he told me this past week.

In part, my essay said:

"My most profound lesson from learning the strategies and tactics of chess is the cognizance of the consequence of my actions. ... I learned that similar to finding every possible convergent square on the chess board, to think through all available options I have when faced with a problem or decision and to consider what may be the result of my actions."

And when I asked Ashley recently what he most wants to teach when instructing students on the game, his answer reiterated what I'd learned: "The absolute most important skill that you learn when you play chess is how to make good decisions. On every single move you have to analyze a situation, process what your opponent is doing and evaluate the best move from amongst all your options."

Ashley says he finds great gratification in reconnecting with students.

"I have had students come up to me later as grown adults to tell me about how chess has helped to transform their lives with their ability to think more critically, to process data more rapidly and to make better decisions," he says.

Taking Ashley back down memory lane, I asked him what he'd accomplished from teaching my class (whose students were mostly education majors).

"The class allowed me to teach the principles behind chess and important critical thinking skills that students develop when they play the game," he says. "It was my goal to infect teachers with a love for the game and the belief that they themselves could teach chess in an actual classroom."

Most of Ashley's teaching engagements over the years have been through the Chess in the Schools program in New York City and the Harlem Educational Activities Fund. These days, he has also partnered with the Chess Club and Scholastic Center of St. Louis to bring chess to places like Ferguson, Mo. 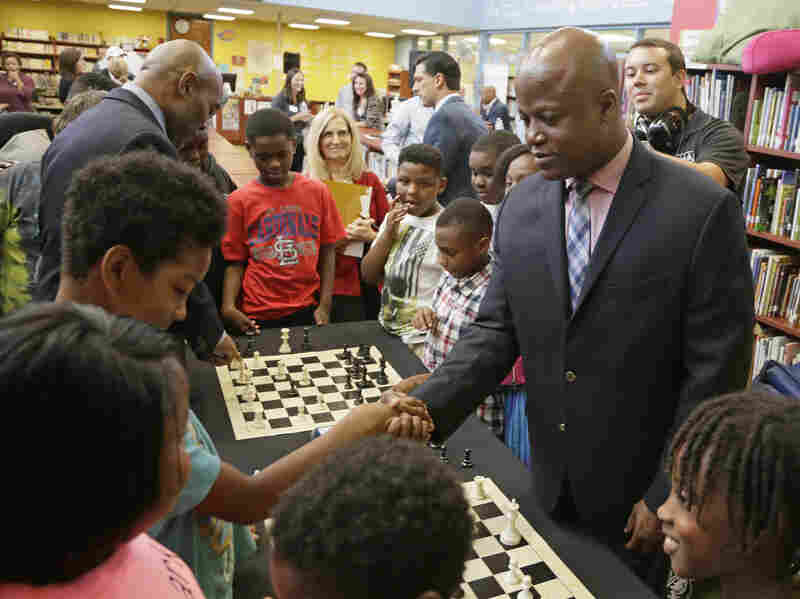 Maurice Ashley (right) shakes the hand of a student after defeating him in a friendly match at Walnut Grove Elementary School in Ferguson, Mo. Tom Gannam/AP hide caption 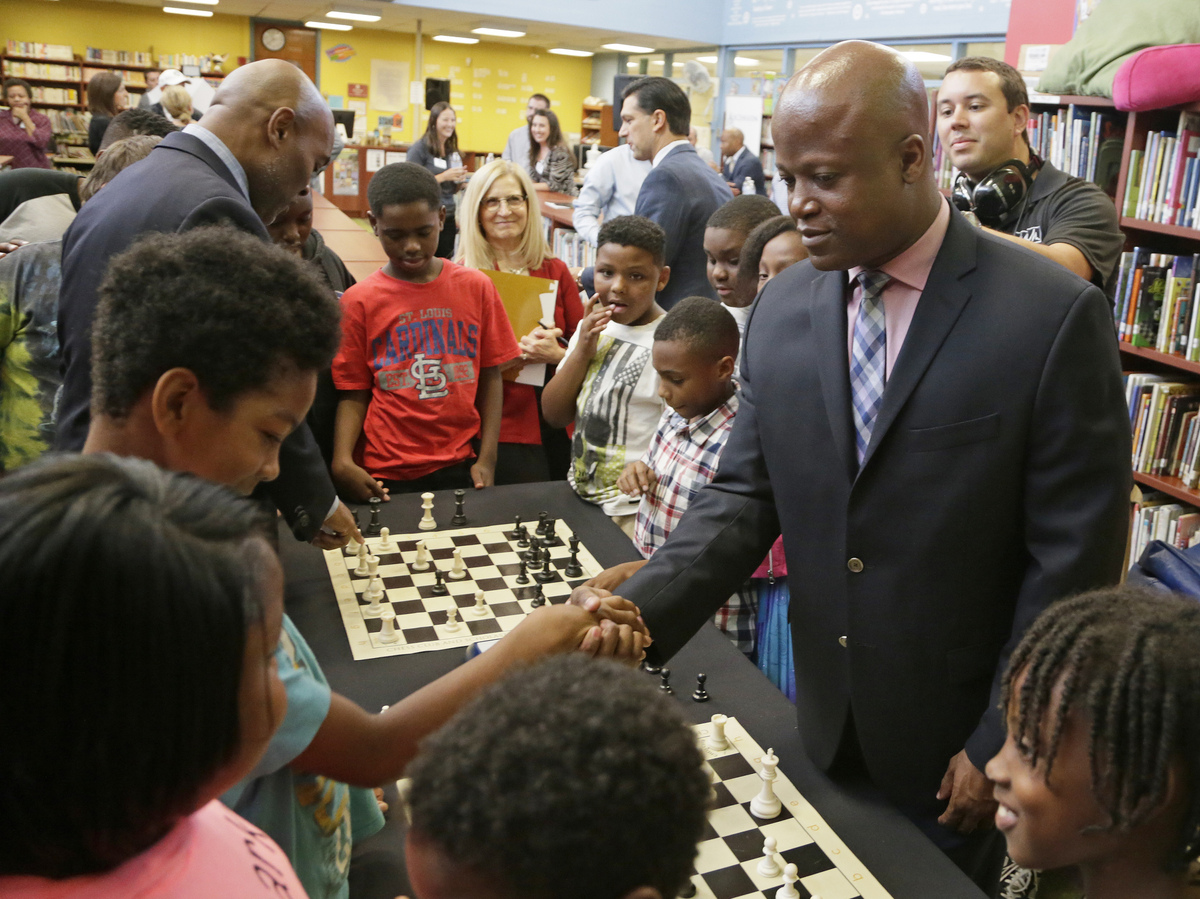 Maurice Ashley (right) shakes the hand of a student after defeating him in a friendly match at Walnut Grove Elementary School in Ferguson, Mo.

"It always warms my heart to be able to teach kids in the five boroughs of New York City, but also to be able to impact young people nationwide," he says.

Several of Ashley's students have participated in national competitions, and three teams — including the Raging Rooks and the Dark Knights — have won national championships. While he's proud of students who become great chess players, he insists his motivation is not to create grandmasters.

"I've had students who have gone onto Harvard, NYU, Yale, the University of Michigan and many other top universities because they've taken those skills from chess that have allowed them to apply [them] to academics and to life. That's really what's critical for me, that they are learning to be better students, role models and citizens."

From Jamaica To The Chess Hall Of Fame

Ashley, 50, was 12 years old when he emigrated from Jamaica to New York City with his mother. He grew up on the tough streets of Brooklyn, and during his teenage years at Brooklyn Technical High School, he honed his chess playing skills in the city's parks and chess clubs.

"Sometimes I didn't feel as though the world could hear my voice or that people really cared," he says. "But I found that with hard work and especially with pursuing your passion, you can grow in ways that you could never have imagined."

Ashley got his first big title in 1992 when he shared the U.S. Game/10 chess championship with Maxim Dlugy. In 1999, he created history by becoming not only the first African-American international grandmaster, but also the first Jamaican-born.

He's won several other accolades for various roles in chess, but says his April 13 induction into the U.S. Chess Hall of Fame has been like a "fairy tale ride." He says he never thought that one day his name and face would be mounted on a wall with the greatest chess players of all time. In fact, he doesn't even fancy himself a great chess player.

He adds, "It means that everything that I've put into this game that I love, the blood, sweat and tears, the hard work, and the suffering through the lean times have been recognized as meaningful to others."

Inspiring Others Through Chess Success

Ashley sees his accomplishments as a way of inspiring others, particularly those who come from similar beginnings. And he's encouraging everyone to follow their dreams, no matter how nontraditional. His focus, however, remains on teaching.

"Everyone should introduce their children to the game of chess," he says. "It's an inexpensive way of teaching your children lifelong skills that they will use for the rest of their lives."

I can testify to that. Ten years after my chess class with Maurice Ashley, I'm still putting to use the lessons he taught me. These sentiments, in another excerpt from my Thinking Chess essay, rings true today in my role as a journalist:

"The most pertinent strategy from chess that I can immediately apply to my profession is the concept of loyalty that surrounds protecting/securing the king. ... One must utilize the full army of pawns, bishops, knights, rooks and the powerful queen to destroy enemies and safeguard the mighty king. As a journalist, my immediate loyalties are to the company for which I work, my sources, my contemporaries, the ethics of my profession and myself in upholding integrity."