Accessibility links
The History Of Children's Books : NPR Ed Literature for kids hasn't always been focused on the magical and whimsical. We take a three-century tour through the history of children's books in the classroom.

Through The Looking Glass: How Children's Books Have Grown Up

Through The Looking Glass: How Children's Books Have Grown Up 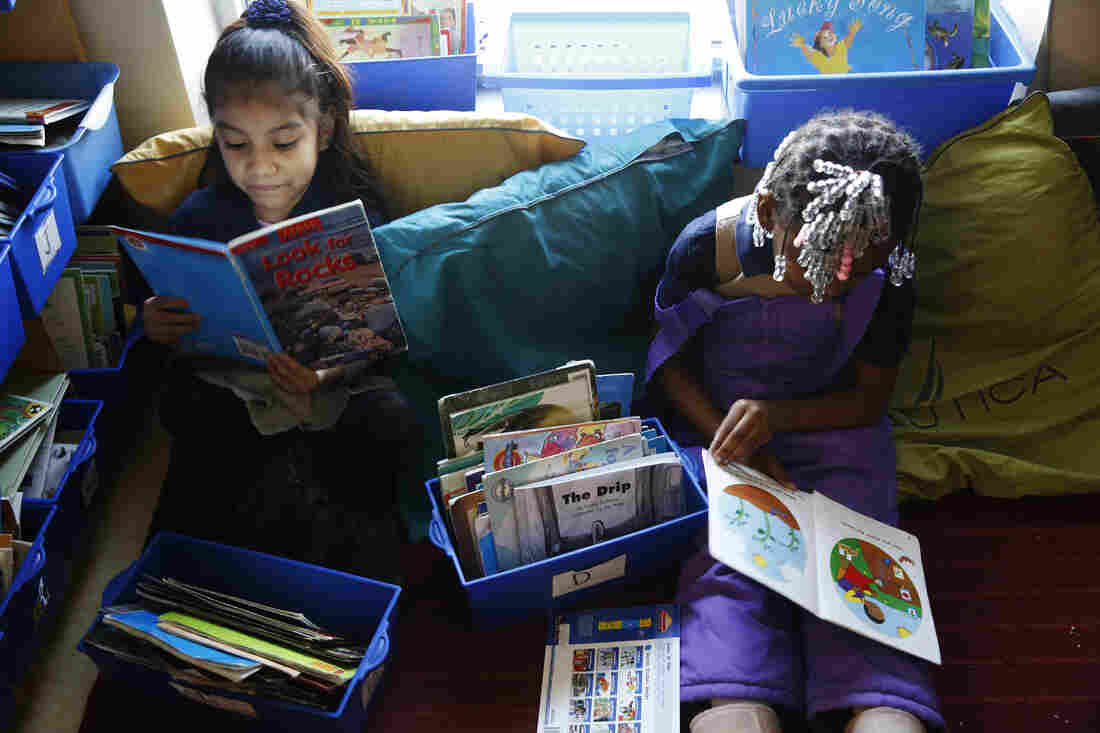 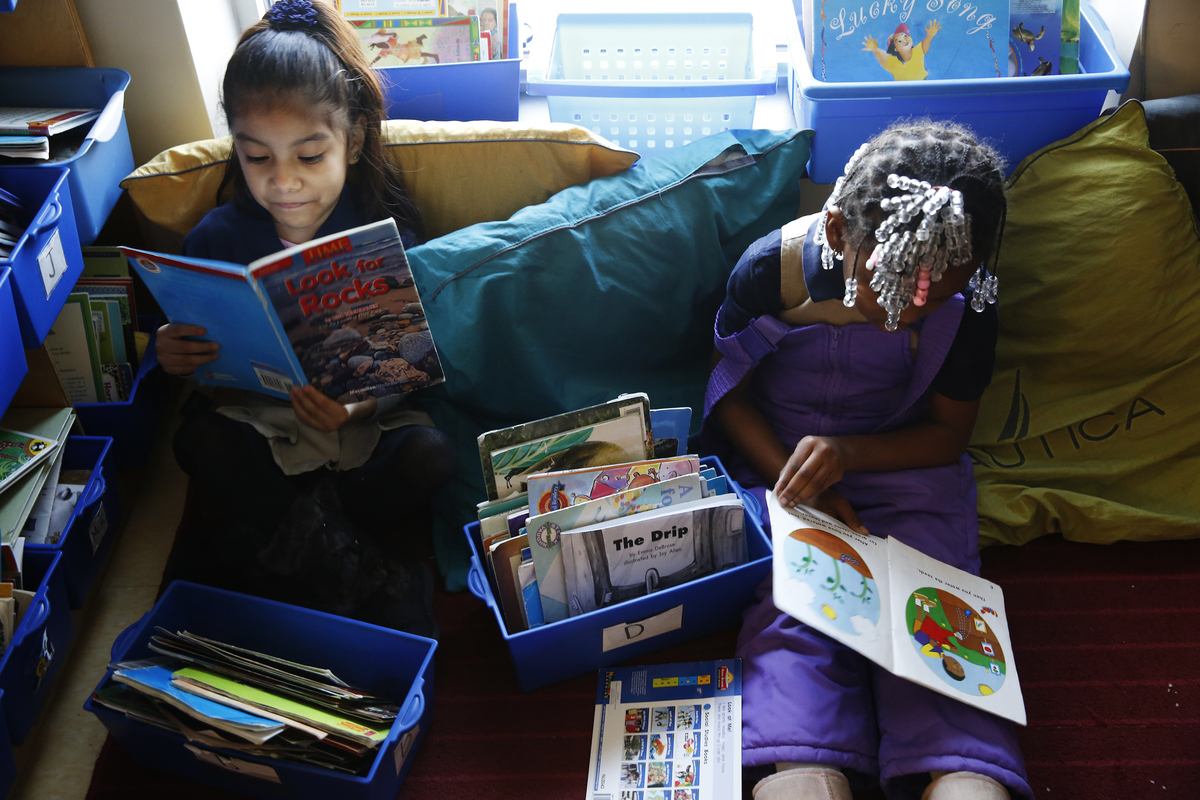 In Sarah Parrish's second-grade classroom, the colors are loud, but the kids are quiet.

It's Thursday morning. Her students sit at their desks, reading to themselves. Books about Ramona and Junie B. Jones. Mystery books, fantasy books ...

Marisa Sotelino has just finished Horse Diaries #3: Koda. She grins when asked about it, showing a mouthful of light green braces.

"It's interesting to see other people, or animals' point of view," she explains, "because, well, you can't be a different person."

Nearby, a boy named Alec Mahini talks about his love for fantasy books: "It makes me feel that I'm in the adventure kind of, like the narrator."

Their teacher thinks all these genres — fantasy, mystery, biography — are worth reading. "Any book that can hook their interest is wonderful," Parrish explains. "Because we want to encourage that reading. The fun and excitement of it — that kind of spark is really important."

It might seem totally obvious: Children should read fun, fantastical books in the classroom and outside of it, so they can learn to love to read. But it turns out that this particular view of children's books is relatively new.

American classrooms have had some form of children's books since the 17th century, but the books teachers have used, and the way they use them, have changed dramatically. For our Tools of the Trade series, we decided to go back to the beginning.

Chapter 1: Once upon a time (in the late 1600s), in a land far, far away (England), there lived a British philosopher named John Locke.

He's mostly remembered for his works of political theory. But for our purposes, let's focus on a short book he wrote in 1693, called Some Thoughts Concerning Education.

Locke wanted to change education — and one of his big ideas was to make reading fun. The alphabet, he wrote, should be taught with dice games, and readers should start with "easy, pleasant" books, even books with pictures.

These are not unusual ideas today, but they were relatively new in their time. The first widely printed picture book for kids — the Orbis Pictus -- had been published only a few decades before, in 1658.

As Locke put it, " ... 'tis usually long before Learners find any Use or Pleasure in reading which may tempt them to it."

The popular school books in Locke's time, like the American New England Primer, were not about storytelling. The Primer did have some pictures, but it was mostly tables of letters and syllables, used to help people learn to read the Bible.

As Locke's theories took hold, both in England and in the United States, they shaped many of the children's books that were published in the 1700s.

Take The History of Little Goody Two Shoes, from 1765. It sticks closely to Locke's educational model of making learning a game. Little Margery Meanwell, also known as Goody Two Shoes, grows up poor, but betters herself through charity and education. For most of the book, she goes around teaching spelling through games, as she does in this passage: 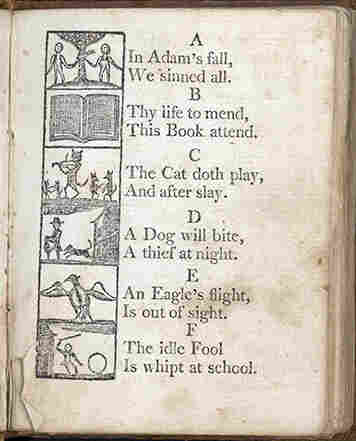 An edition of the The New England Primer, from 1803. Rare Book and Special Collections Division/Library Of Congress hide caption 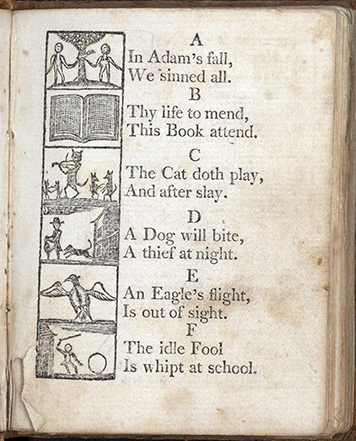 An edition of the The New England Primer, from 1803.

"The usual manner of spelling, or carrying on the game, as they called it, was this; supposed the word to be spelt was plumb pudding (and who can suppose better) the children were placed in a circle, and the first brought the letter p, the next l, the next u, the next m, the next b, and so on, until the whole was spelt; and if any one brought a wrong letter, he was to pay a fine, or play no more."

But even though Goody Two Shoes had a plot, it was not the kind of fantastical adventure we're familiar with today.

"Locke was very suspicious of anything that might be thought to escape the real," explains William Gleason, a professor of English at Princeton University who researches children's literature.

"It doesn't mean that there wasn't any fantasy," Gleason adds, "but the dominant strain — and particularly the strain that was educationally approved — was highly rationalized."

Chapter 2: Then, we fell down the rabbit hole.

"It offers such an amazing imagined world of curiosity that it really kind of changes the game," says Gleason. Alice kicked off a whole series of books that focused on imagination — Peter Pan, Tom Sawyer, The Little Princess, The Secret Garden — books now considered staples of the "golden age" of children's literature.

Gleason says these books were part of a shifting sense of what childhood really meant. In the late 1800s, a child, or, at least, a middle-class Anglo-American child, was becoming less of an economic unit and more of an emotional one. Childhood was seen as a space of protected innocence.

So Alice embraced childhood curiosity and wonder, reinventing children's books. She did not, however, reinvent the American classroom. 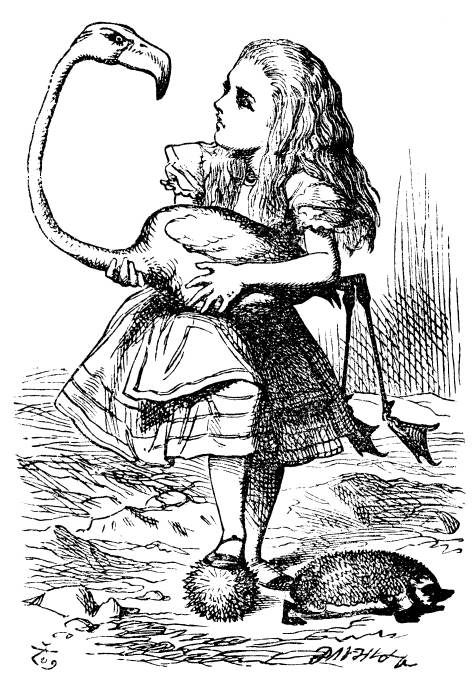 Books like Alice's Adventures in Wonderland and the Adventures of Huckleberry Finn sold well, but they weren't really taught in schools.

That's partly because they took an almost anti-educational stance. Huck, for the most part, doesn't go to school, and Alice's book smarts don't get her very far in Wonderland.

There may be another reason, though, that authors like Twain and Carroll didn't make it into classrooms. Seth Lerer argues that those books didn't align with a major purpose of U.S. education in the late 19th and early 20th centuries: the assimilation of immigrants.

Lerer studies children's literature at the University of California, San Diego. He points out a widely popular children's book from that time that did make it into schools: Hendrik van Loon's The Story of Mankind, an illustrated walk through the history of Western civilization. Its central themes are individualism and democratic participation — ideals that schools at that time were seeking to instill.

Chapter 3: The Russians are coming.

In the mid-20th century, the U.S. competition with the Soviet Union drove a re-evaluation of children's books in the classroom, according to Philip Nel, who studies children's literature at Kansas State University. Suddenly, the whole country was afraid that the U.S. was falling behind, and that education was to blame.

Rudolf Flesch's best-seller, Why Johnny Can't Read, and What You Can Do About It, and a piece in Life magazine titled Why Do Students Bog Down on First R? led the charge.

The Life article, by the journalist and author John Hersey, suggested that boring Dick and Jane readers were to blame for Americans' subpar literacy.

So began the effort to make early readers that children might actually enjoy. 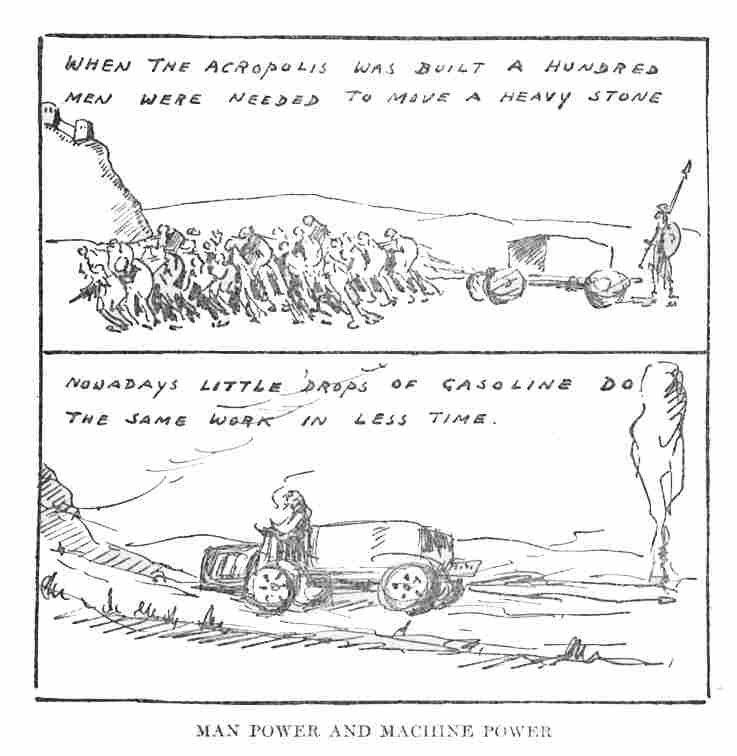 An illustration of the shift from manpower to machine power in The Story of Mankind. Hendrik Willem van Loon /Ohio State University Library hide caption

The Cat in the Hat. Green Eggs and Ham. Are You My Mother? The Berenstain Bears. Go, Dog. Go!

Seuss and Sendak were unleashed in schools, and the shift away from morally improving, no-frills lessons that began with Alice a century earlier was complete.

Chapter 4: To The Hunger Games and beyond.

William Gleason, the Princeton professor, sees another shift taking place, slowly. A shift toward books that confront the complexity — and deep emotional challenges — that children and adolescents face. There's also been a growing move toward books that reflect the diversity of the current student population.

Books like Judy Blume's Are You There God? It's Me, Margaret, which deals very frankly with puberty, are a part of this shift. And young-adult dystopian books like the Hunger Games series, with its dark themes of violence and frustration, continue it.

"We're taking childhood anger and fear and anxiety seriously and turning it into powerful representation," Gleason says. "That is something different."