Accessibility links
MacArthur 'Genius' Angela Duckworth Responds To A New Critique Of Grit : NPR Ed The author of a new meta-analysis says the importance of grit — a concept that has gained wide traction in education circles — has been exaggerated. 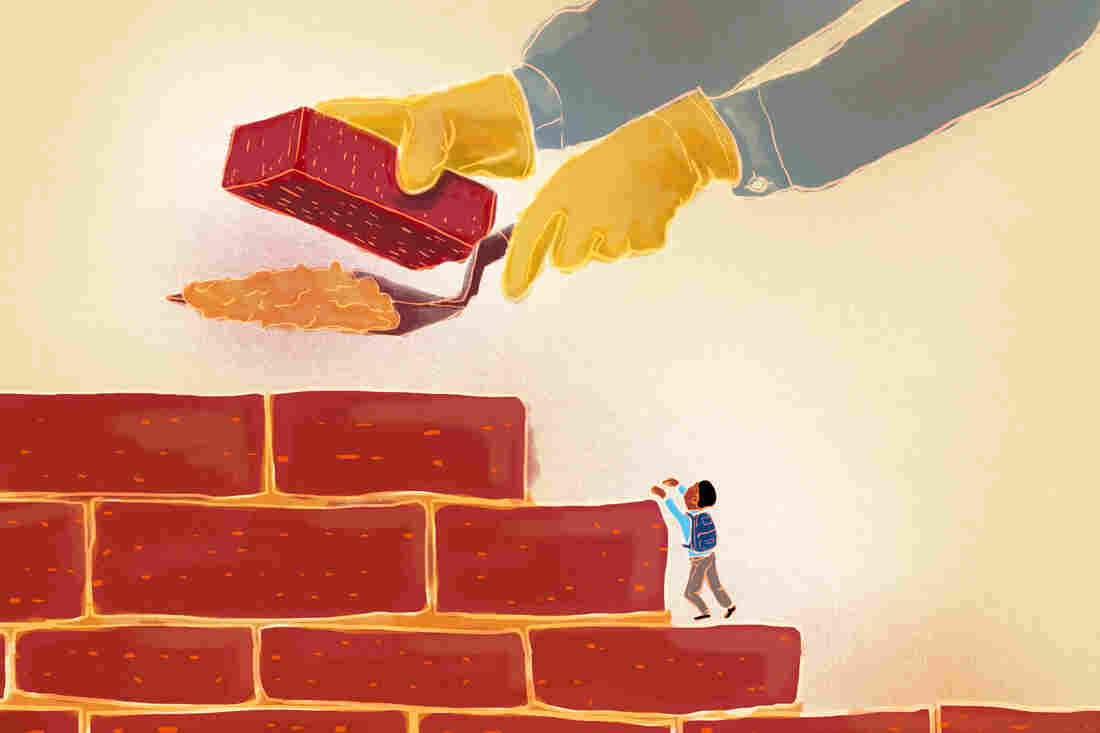 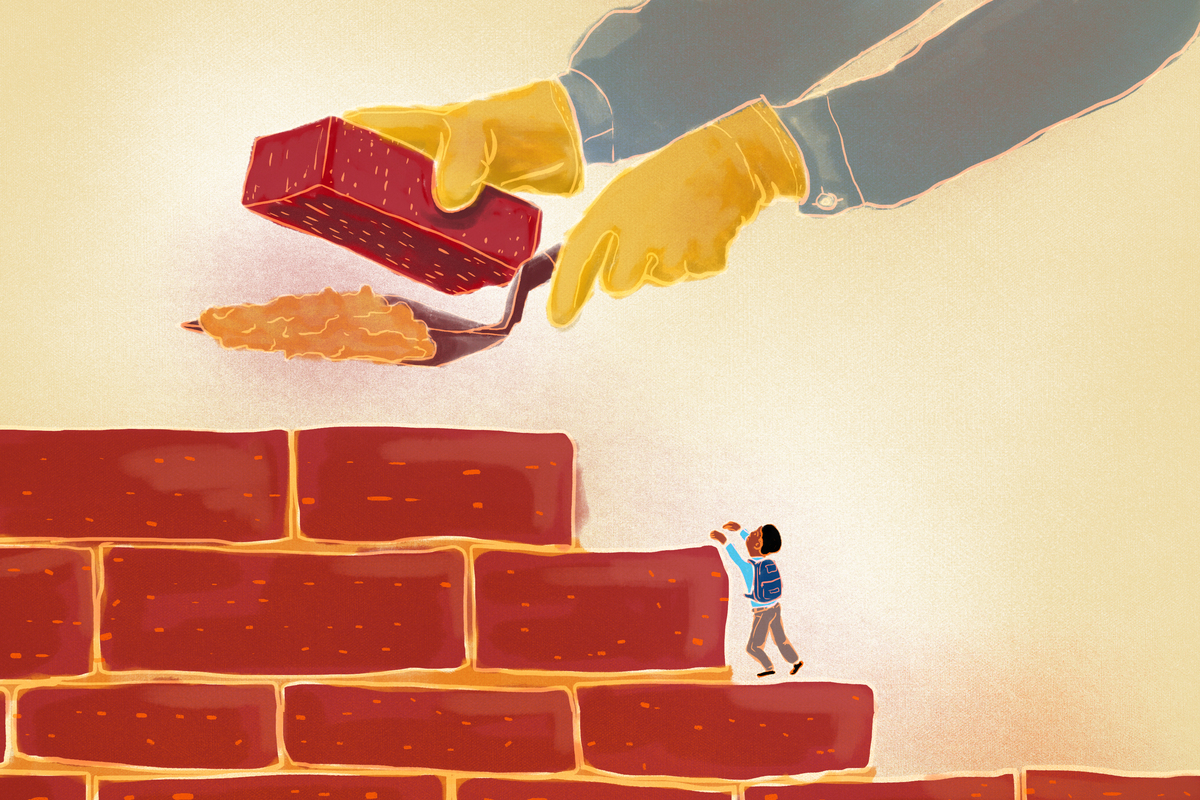 Grit has been on NPR several times recently, not to mention front and center on the national education agenda.

The term expresses the idea that a crucial component of success is people's ability to pick a goal and stick with it. That's the main thrust of research by Angela Duckworth at the University of Pennsylvania, which has earned her a MacArthur "genius" grant, national acclaim and, this month, a best-selling book. 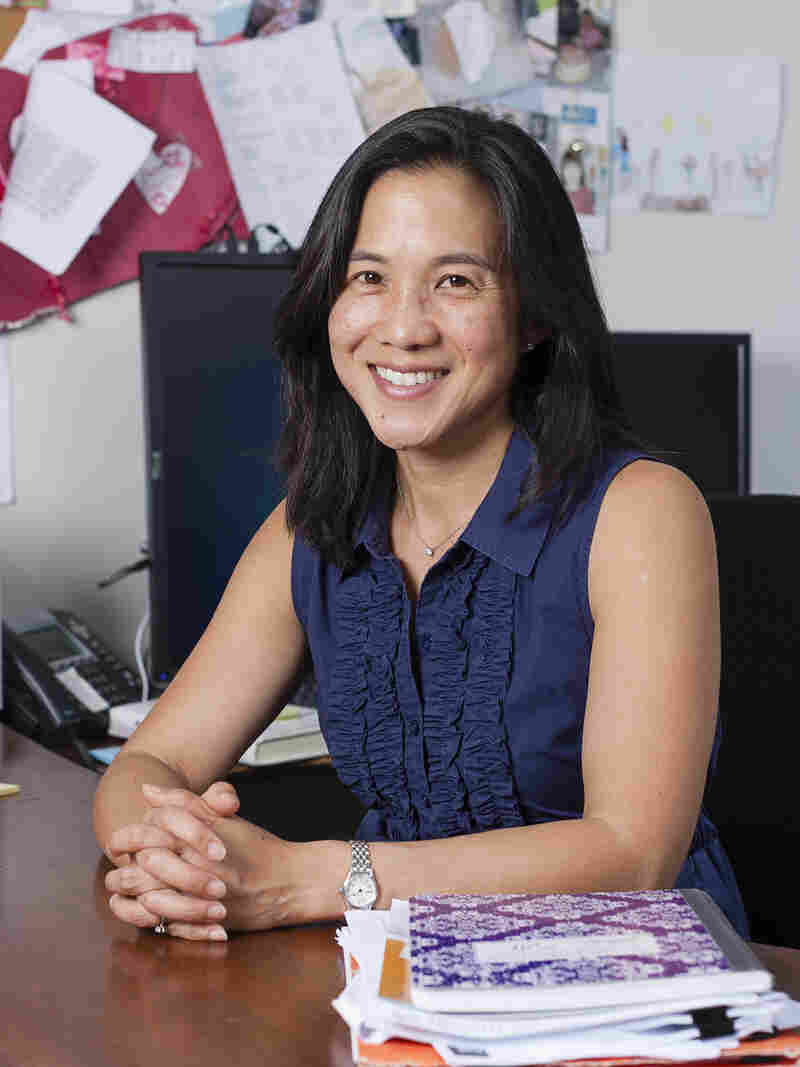 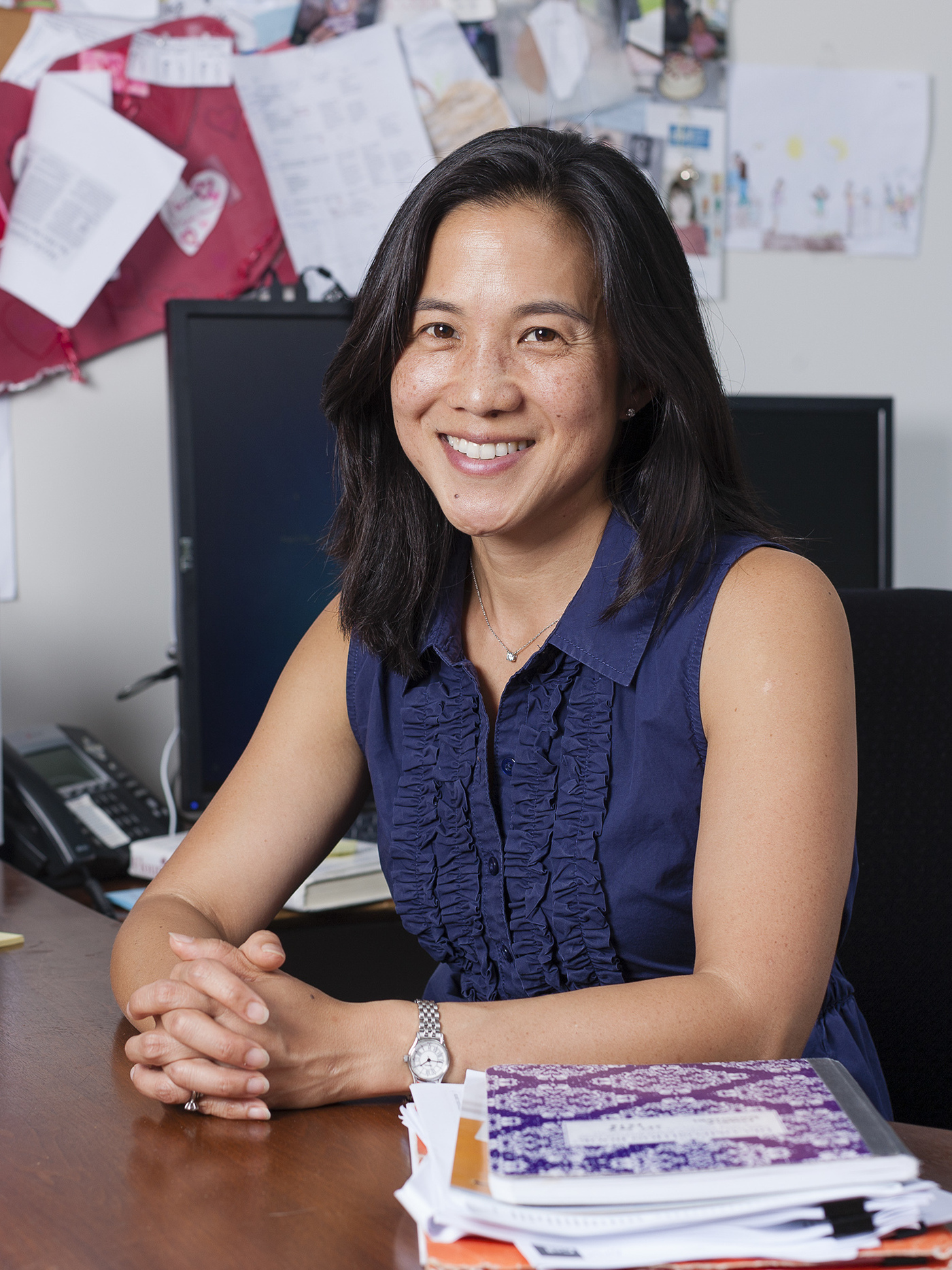 Angela Duckworth, professor at the University of Pennsylvania.

But a new report suggests that we should all take a step back and chill. The study, Much Ado about Grit: A Meta-Analytic Synthesis of the Grit Literature, will appear in an upcoming issue of the Journal of Personality and Social Psychology. It analyzes 88 separate studies by Duckworth and others.

"My overall assessment is that grit is far less important than has commonly been assumed and claimed," says the lead author, Marcus Crede, an assistant professor of psychology at Iowa State University. "And it doesn't tell us anything that we don't already know."

Duckworth has now responded in detail to the charges in the paper — and acknowledges some of the points are correct. In a series of emails to NPR Ed, she added, however, "I can't see, exactly, how the author goes from these findings to the rather bold claims in his press release."

Here are the key claims in Crede's paper:

On Point No. 1, Duckworth admits to the charge of badly describing the size of her outcomes.

In a 2009 paper, she and co-author Patrick Quinn famously looked at answers by West Point cadets on an eight-item version of her "grit scale."

The paper stated that grit was highly predictive of the likelihood of making it through "Beast Barracks," or basic training.

"Cadets who scored a standard deviation higher than average on the Grit–S were 99% more likely to complete summer training," the paper says. 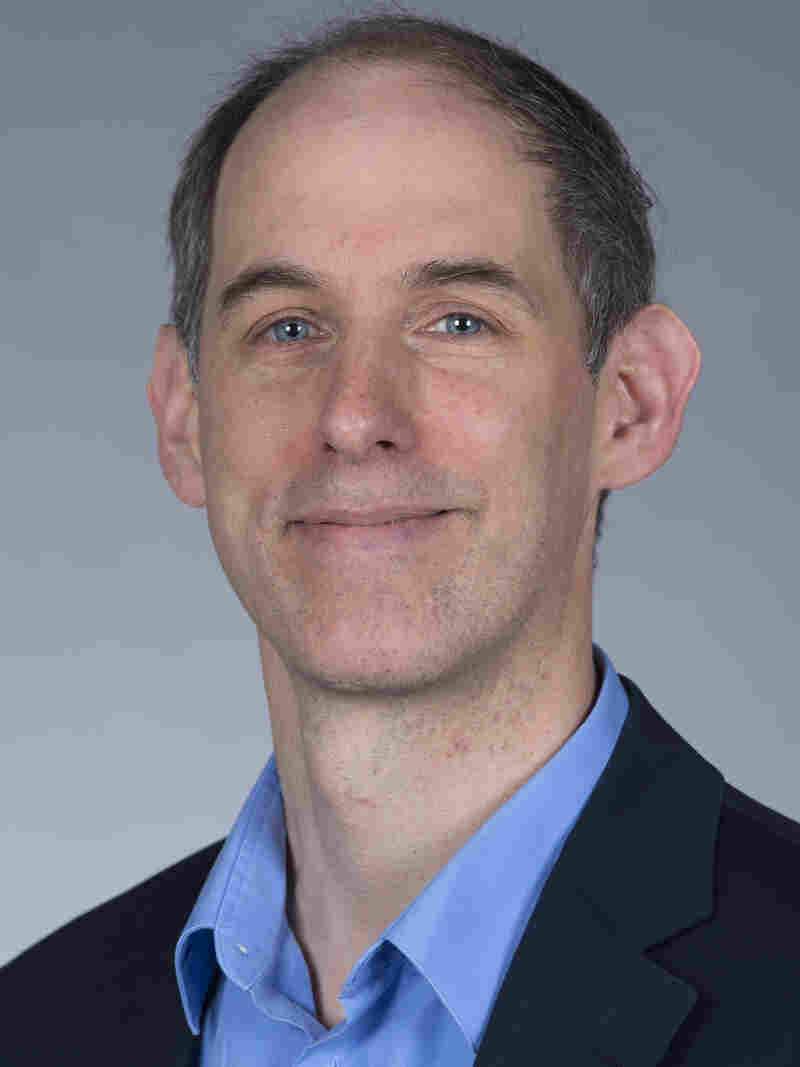 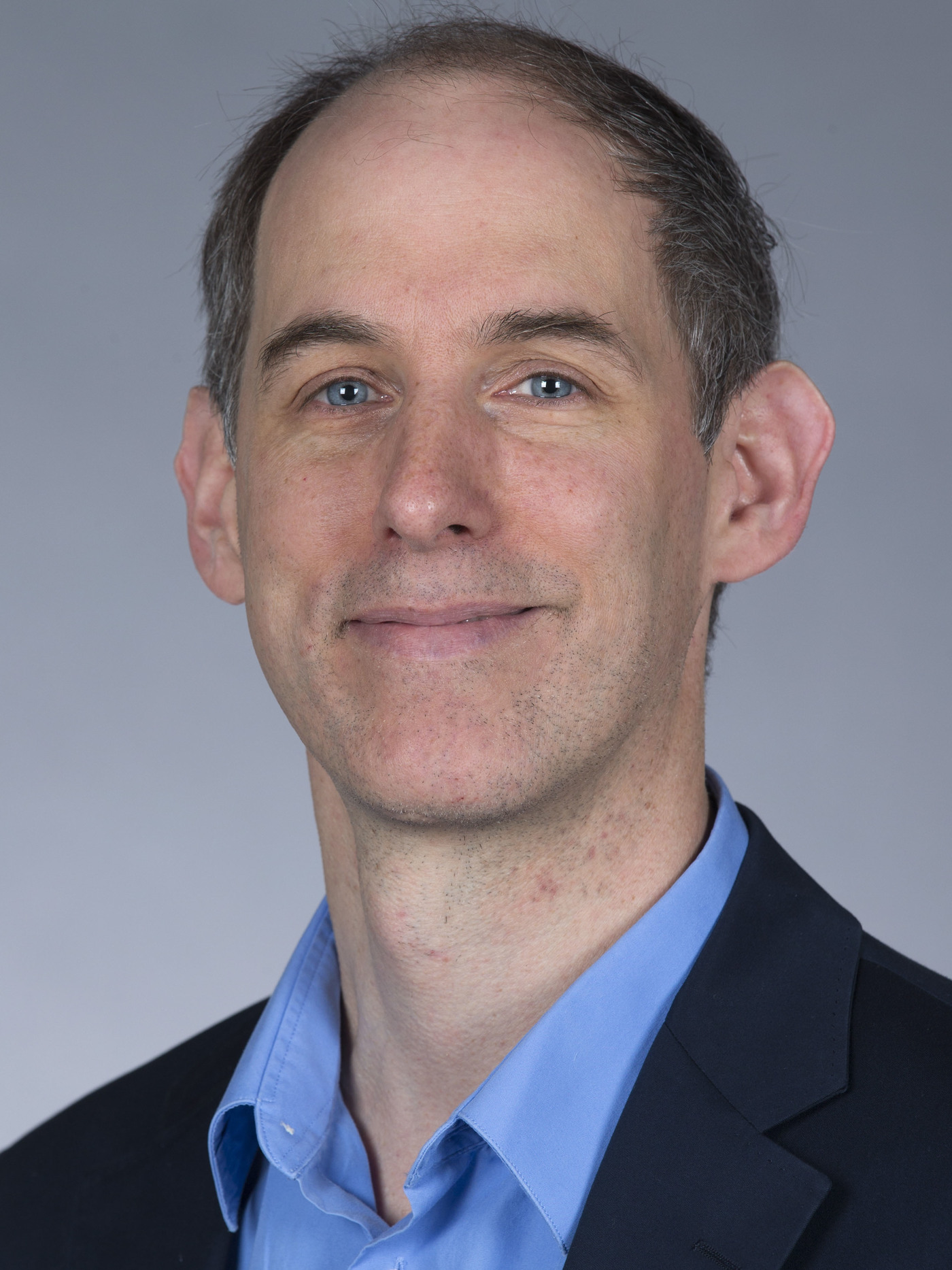 That sure sounds like a big win for grit. But, as Crede points out, in fact what happened is that 95 percent of all cadets make it through Beast Barracks, while 98 percent of the very "grittiest" candidates made it through.

This is a technical point, but to simplify, it's the odds of making it through that improved by 99 percent. Most laypeople, though, would interpret "99% more likely" as meaning that your chances of getting through bounced, say, from 40 percent to 80 percent. Not by 3 percentage points.

The correct numbers are clear from the charts and tables in the original paper.

Duckworth, in an email, agreed with the critique. "Crede is right that I should have said [it that way] ... but again, the tables and statistics are entirely correct, and the intent was not to mislead!"

Crede's paper calls the relationship between grit and academic success "only modest." His analysis found an overall correlation of 0.18, looking at papers by Duckworth and others.

This compares to a much higher correlation of 0.50 between, say, SAT scores and performance in college.

Fundamentally, she told NPR Ed, she doesn't disagree with Crede here either. She says her findings of the independent impact of grit are what personality psychologists would put in the "small-to-medium" range.

This would seem to be at odds with previous statements by Duckworth, such as in her 2013 TED talk, when she presents grit as a powerful, even unique factor: "One characteristic emerged as a significant predictor of success. And it wasn't social intelligence. It wasn't good looks, physical health, and it wasn't IQ. It was grit."

Others have been even more effusive. The cover blurb on Duckworth's book by Daniel Gilbert, author of Stumbling on Happiness, states, "Psychologists have spent decades searching for the secret of success, but Duckworth is the one who found it."

This one is in some ways Crede's biggest. He's challenging the uniqueness of grit, and therefore its usefulness as an object of research.

The search for a scientific way to describe personality traits goes back at least to the 1930s. But in recent decades, psychologists have settled on a group of personality dimensions known as the Big Five: conscientiousness, agreeableness, extroversion, neuroticism and openness.

Components of conscientiousness include organization, self-control, thoughtfulness and goal-directed behavior.

In the various studies Crede looks at, conscientiousness scores and grit scores are very highly correlated — between 80 and 98 percent. Therefore, he calls grit a case of "old wine in new bottles."

This matters, because a major implication of Duckworth's work is that grit is a skill. Schools and districts around the country are currently working hard on creating curricula for grit, and even accountability tests to measure it.

But, psychologists say conscientiousness isn't a skill. It's a trait — driven by some unknowable combination of genetics and environment. It can change, typically improving as children grow up, but it's not necessarily amenable to direct instruction. Nor would we necessarily wish it to be.

"I think as a parent I would feel uncomfortable if my daughter came home and said, 'My school is changing my personality,' " Crede says.

Duckworth counters that some grit-targeted instructional interventions have, in fact, proved successful in experiments, particularly those that target growth mindset — and that teach about the importance of certain study techniques, like deliberate practice.

Duckworth said in her response to Crede's paper that she would prefer to think of grit as "a member of the conscientiousness family," but one with independent predictive powers.

One of the ways that Duckworth and other researchers have tried to distinguish grit from conscientiousness is by adding in a factor called "consistency of effort." In other words, gritty people tend to have a singular passion that they pursue year-in and year-out, accumulating "10,000 hours" of deliberate practice toward a point of utter mastery.

Nope, argues Crede. When you look at people's responses to questions about consistency alone, he writes, they aren't predictive of very much at all. Not only that, he suggests that consistency may not help people in all circumstances.

People with a monomaniacal obsession and superhuman powers of dedication are not the only model for success. After all, we don't all aspire to be Army generals or to win the spelling bee. Sometimes, in the face of a novel or creative challenge, you have to abandon your original approach, try something new, ask for help.

For an example, Crede cites no less a figure than Einstein, who is one of Duckworth's models of grit. "He almost got scooped on his big discovery, because he needed to ask for help with his math."

So, has the impact of grit been exaggerated? Or did something get lost in translation? Is it time to give up on grit and try something new?

Duckworth says she never tried to oversell her findings, and has always tried to be "clear and honest."

"I aspire to be a scientist who remains open to criticism because I can't possibly be 100% right about everything!" she told NPR Ed.

She said she's currently thinking about revising her "grit scale," her basic experimental tool, specifically the questions about passion.